25-year-old Demitria Dee’s typical day at work goes a little something like this:

First, the self-confessed introvert takes a few deep breaths to steady herself. Then, she approaches the person/couple seated in front of her before trying to strike up a conversation. If they don’t feel like chatting, Demi leaves them alone for the time being and waits patiently should they change their minds.

However, if they are open to her presence, where the conversation goes depends entirely on their moods. Sometimes, Demi hears about happy memories and good times, making the conversation free-flowing and effortless. Others, she lends them a listening ear or a shoulder to cry on, her presence alone providing a smidgen of comfort.

“Every day is different,” Demi tells me. But there is one thing they all have in common. Between the lulls in the conversation, no matter whether the mood is light or tense, Demi either makes them a drink or refills their glass.

Yes, Demi is bartender, not a therapist. Although she does have to be a good listener on top of being a great bartender.

I mean, she is the head mixologist from Skai Bar.

As difficult as some conversations with guests might be, Demi shares that being able to have these interactions in the first place is what she loves about her job, and what makes it great.

In the 4 years she’s worked as a bartender, Demi has had the opportunity to meet all sorts of people from all over the world, and has learnt a great deal about life from behind the bar.

“The job really changed my life!” Demi professes, before explaining that having been born and raised in the city of Medan, Indonesia, she probably would’ve become a banker if she remained in her hometown. But though it might’ve been the easier/safer route, Demi shares that on hindsight, her ever-curious and adventurous self would’ve soon grown restless.

Nothing about the corporate world excited her, so when the chance came to see more of the world and expand her horizons, she naturally leapt at the chance.

“Without bartending, I wouldn’t be speaking to you today. I wouldn’t be able to work with Skai Bar and Auchentoshan to bring people together. And I definitely wouldn’t have been able to hear so many stories and discuss certain issues and life in general with so many guests. My perspectives wouldn’t have broadened.

It’s almost as if I’m experiencing a different life through the guests, you know? I always imagine what being in their shoes must be like, so if the same thing happens to me in the future, I’ll have a better inkling of what I’ll feel and do.”

Demi loves that her unconventional job allows her to bring urbanites together and have meaningful interactions with each of them. Indeed, if she wasn’t on the clock, Demi would like nothing more than to kick back with a smooth, single-malt Auchentoshan whisky, spending the evening chatting with her guests.

However, it goes without saying that this exchange of knowledge doesn’t always happen. After all, Singaporeans generally aren’t chatty with strangers, even with alcohol helping things along. Which only means the onus is on Demi to make guests feel both welcome and comfortable—something she opines is what differentiates a good bartender from a great bartender.

You see, bartending isn’t just about mixing the “best” drink—ego should be left at the door. It’s also about hospitality and how you treat the people in front of you.

Demi tells me that in her earlier days as a bartender, there was an instance when she served drinks to guests, only to have the glass come back full. She felt horrible but the experience helped her learn how to be a bartender. Now, Demi tries to first understand the guest and what their tastes are.

“That personal relationship/touch is so important. Once guests trust you, they’ll fall in love with you and come back. That is very fulfilling.”

But how did Demi get into bartending and where did she first learn these lessons from?

As a child, Demi spent most of her free time in the kitchen observing her parents whenever they cooked the family’s meals. In her own words, she was “very kaypoh” and despite several chidings, Demi would perpetually bug—and sometimes, insist—her mother let her hold the spatula. In the same vein, questions about the varying ingredients were fired off non-stop. She just wanted to understand how everything worked.

“Seeing my mom do her thing just triggered me to touch everything!” Demi says with a hearty laugh, before sharing that she used to read cookbooks for leisure.

The ability to create something delicious from scratch fascinated her; flavours were a delightful mystery. And combining said flavours was, in itself, an art form. As such, when it came time for college, Demi decided to head to Kuala Lumpur to pursue a degree in culinary arts.

But a couple of YouTube videos changed everything. While training to be a pastry chef in college, Demi stumbled upon a video that featured renown bartender, Luca Cinalli. Utterly mesmerised by how Luca married bartending with performance art, Demi made the decision there and then to become a bartender.

It also helped that at the time, she was already dabbling in the art of coffee making, after being encouraged to take part in beverage competitions by her lecturers.

“During the training for that competition, and after being inspired by Luca, I realised that I could use my pastry and culinary skills to help with making cocktails. For example, I could make jam and use it as one of the ingredients in the drink. Or I could bake a cake/meringue and use a slice as a garnish. The flavour profile of Auchentoshan whisky is also very versatile, which makes it extremely suitable for cocktail mixing. Being able to combine all these different tastes was really cool,” she shares.

Essentially, Demi was able to combine everything she liked in one medium. And that was it. With the contacts she made during her various competitions, Demi leapt headfirst into the industry and never looked back.

This isn’t to say her journey has always been smooth-sailing. Demi faced her fair share of resistance from her parents who had a few reservations.

Concerned with the late nights she’d be working and the effects it might have on her health, coupled with the possibility of drunk, rowdy customers, Demi’s conservative parents tried to dissuade their daughter from her choice of career.

But she didn’t budge. To her, it was worth a shot. Without at least trying, Demi wasn’t going to let her dreams stay dreams.

Thankfully, after seeing how hard she worked, her parents quickly realised that their daughter was serious about her job.

While Demi did have seniors/mentors she could turn to for help, she is still largely self-taught. Like anyone passionate about their craft, Demi did her homework by frequenting other bars to try to pick up new skills and learn from other bartenders’ experiences; she experimented at home; she read more books on bartending and mixology on her own than the entire time she spent in university.

Today, Demi wants to share the knowledge she’s accrued over the years with as many people as she can. Believing that a good whisky like Auchentoshan is best enjoyed with friends, Demi now conducts workshops which aim to teach the public how to entertain with cocktails to enhance the experience of a single-malt whisky.

“You can always drink on your own but to me, it’s a very lonely activity. I don’t think I’ve ever done it,” she says.

From being born and raised in the city of Medan, to leaving for KL to be a pastry chef; from knowing precious little about beverages to being the head mixologist at Skai Bar, Demi has indeed come a long way.

The best part? The 25-year-old is only just getting started.

Just like the single-malt Auchentoshan whisky she regularly uses in her line of work, Demi is delicate. With all the people skills Demi’s picked up during her time behind the bar, she’s also as smooth as they come.

On top of this, the woman is versatile. Demi is a fiercely independent lady who loves talking to and being around new people. She’s an introvert with an extroverted personality. Oh, and as someone who loves her parents but refuses to let them dictate her life choices, she is sweet, with just the right amount of spice.

Combine all of this, add ice before shaking well, and what do you get?

Something worth toasting to, of course.

This piece was sponsored by Auchentoshan

If you would like to enjoy a glass of Auchentoshan, head to Tinbox (18 Mohamed Sultan Road), Blue Lotus Kitchen + Bar (991B Alexandra Road), Tono Cevicheria (DUO Galleria), Fat Chap (Suntec City), or The Spot (Marina One).

Neat, on the rocks, or in a cocktail, the choice is yours. Also, should you want to spend an evening learning how to garden your own urban farm with the Edible Garden City—over a glass of Auchentoshan, no less—sign up for the event happening on the 5th of December, here. 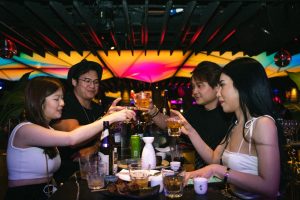 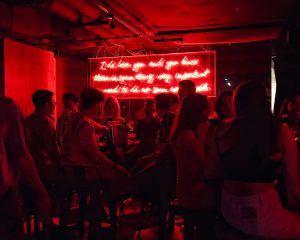 All photography by Zachary Tang.  For some men, women are props. Ornaments used to signify status and desirability in society. Beautiful women, in this specific sense, are like expensive cars, watches, or fine bottles of wine.  For the right price, you get to take it home with you.  Before C Image credit: White Label Records It’s Friday night on Ann Siang Road. After dark, laughter erupts from tables of office workers with martinis in hand, lounging on the high stools decked along the street of bars aplenty. Past 10:30pm, the boisterous gossiping dwindles like a child sinking deep i