Breaking Fast with a Frenchman and His Family Becoming a Muslim was not on Guillaume Jean Pierre’s list of things to do when he first arrived in Singapore from the countryside of Bordeaux, France, 8 years ago.

Now, he goes by his Muslim name, Bilal (meaning purity and water), is married to local actress and host Nadiah M. Din, and is on his way to becoming a father in October.

Prior to our meeting, Bilal detailed (over email) the numerous positive encounters he’s had with Muslims in Singapore during his time here. In particular, he was struck by how quickly Nadiah’s family warmed to him on his first meeting with them, treating him as if he was one of their own.

Today, the same spirit of hospitality lives on.

When we show up at Nadiah’s mother’s house at 6:45 PM on a Tuesday night, we find the entire family in the living room eagerly waiting to receive us. From there it’s all handshakes, warm smiles and introductions.

Formerly a Christian, Bilal converted to Islam in October 2015 after attending 6 months of religious classes and fasting during Ramadhan. As a Christian myself, I was curious about what drew him to Islam.

Bilal says that converting was an easy choice. While he was not active as a Christian, he was moved by Islam’s values of love, compassion and charity.

Coming from a family that would disown me should I ever renounce my faith, I was surprised to learn that Bilal’s family embraced his conversion.

“Although my family was not expecting me to go down a religious path, my mum was very happy because she saw me become a better person,” he shares.

For Nadiah, Bilal’s love for his mother was what captured her attention and affection. Despite living thousands of miles away from his family, he believes that his religion has empowered him to have a stronger and more emotional relationship with his family.

His choice, however, was not well-received by everyone. Upon learning of Bilal’s decision to convert to Islam, some people that he knew stopped talking to him, “Because they think I’m weird or they don’t tolerate my change.”

Midway through our conversation, I finally ask the question that’s been on my mind: how did Nadiah and Bilal meet?

To cut a long story short, they met at a mutual friend’s gathering.

“My eyes were fixated on him but he was not looking at me at all. He was the uninterested one,” claims Nadiah. But it was “that accent, that face, that heart” that persuaded Nadiah to give him a chance, and the two gradually transitioned from hanging out as friends to dating.

Eventually, Nadiah introduced him to her religion and way of life. She recommended he attend Islamic classes and encouraged him to kick his drinking habits.

This was one of the biggest obstacles faced by Bilal, who had been drinking since he was 15. Having grown up in the South West of France where vineyards are ubiquitous, wine naturally played a big part in Bilal’s life.

“It was many years of addiction; I was the type of drinker who saw a bottle and had to finish it,” he confesses sheepishly.

Nadiah gave him 6 months to stop, “I told him that you have to be committed. If you want to stay with me, you have to quit!”

While her tone was stern, her eyes smiled and sparkled.

The fact that they came from different religious backgrounds didn’t stop them from getting along like a house on fire. In fact, the story of their relationship gives me hope that the religious differences in my own relationship can be reconciled too.

Now that Bilal abstains from alcohol, he’s had to make some adjustments to his social life. Instead of hanging out with his friends at bars or clubs, he goes to their homes, watches TV and plays football.

It’s a difficult adjustment he’s had to make, but he remains positive about it, joking, “This is true friendship because we’re all sober.”

At 7pm, Bilal, Nadiah, her mother and 5 other members of the family are squeezed together in the small kitchen for the Iftar (Breaking Fast). Not wanting to be nuisances, we escape to the quiet of the living room.

We observe from a distance as Bilal is assigned the job of carving up a large cantaloupe while the rest of family busies themselves with setting the table. The kitchen’s occupants chat excitedly as the table quickly fills up with bowls and plates of pattaya, kampung fried rice, mee goreng and curry. They’re hungry and ready to eat. But first, prayers.

By 7:10 PM, all 8 of them have taken their place around the table. They begin to pray; palms open at first, then clasped together.

The past few minutes of flurried activity have been replaced by a moment of calm. For a few seconds, an air of tranquility settles around the house.

When they finish, the eating commences. They begin with fruits, watermelon, grapes and apricots to whet their appetite. Dinner conversation moves along slowly as they busy themselves with the spread that’s been laid out.

When Bilal first began fasting in 2015, what was initially supposed to last for 5 days turned into an entire month. He recounts that at the start, he couldn’t imagine not eating or drinking for so many hours and had expected it to be extremely difficult.

As someone who eats breakfast at 8 and is ready for lunch by 11, I share his sentiments.

But by the end of the first week, he had begun to enjoy it.

“I actually miss Ramadhan every time it ends. It’s tiring to not eat or drink sometimes but you feel better, more renewed. It puts me into a calmer mood,” he declares.

Thus far, every Ramadhan since Bilal’s conversion has been different. During his first Ramadhan back in 2015, he wasn’t a Muslim yet and so didn’t perform any prayers. Last year, he prayed 5 times each day. This year, he performs additional Terawih and Qiyam prayers at night.

This Ramadhan is also his first time leading the Adhan (call to prayer): “It’s funny because we call the person who leads the Adhan ‘Bilal’. Although the proper term for it is muezzin, but because Bilal was the first muezzin, the name Bilal stuck. So whenever it’s time for Adhan, people always jokingly point at me and tell me to do it.”

This year, he finally got his chance. The Muslim Converts Association, looking to increase the participation of foreign Muslims in their activities, rang him up one day.

“They said they could teach me the Adhan if I wanted to learn, and so I did.”

At 7:45 PM, when the Sun has completely set, the men prepare for their evening (Maghrib) prayers.

Placing their prayer mats down on the floor in the direction facing Mecca, they being to pray the first of three units (raka’ts). Stand, raising both their hands, bowing, and prostrating in unison, they repeat this process several times.

It’s an intimate glimpse into their lives and religious practices, one which I’ve never had the privilege of witnessing before.

While the rest of Bilal’s family prepares to head out to the Geylang Serai Night Market after their prayers, he’s got different plans in mind. At 8 PM, he heads to Ghim Moh for his Terawih prayers.

Bilal explains that these prayers are obligatory, not compulsory, and only performed during Ramadhan. They’re long, and can take up to two hours as long portions of the Quran are recited. At the same time, I can’t help wondering, why Ghim Moh?

To my discovery, there’s a mosque built into the void deck of one of the flats. It’s a permanent set-up, and the only one of its kind in Singapore. It’s also been there for over 30 years.

Bilal first heard about the void deck mosque from his religious teacher, who was invited to lead its congregation in prayers when its then leaders were getting too old and needed someone younger to take over.

He shares that he’s highly fond of this place. With a small group of only about 30 to 40 people attending each night, Bilal finds it “comfortable and more chill” as opposed to going to a regular mosque. “I’m white so sometimes when I go to regular mosques, I see people talking. I can tell but I don’t care. I’m there for just one purpose, which is to pray.”

Although walls have been installed around the perimeter of the mosque at Ghim Moh, the entrance is open, providing passersby with an unobstructed view of the interior and its ongoings.

I’ve never been to a mosque before or even glanced inside one. But tonight, I hover silently near the entrance, observing from the outside.

Fortunately, the attendees don’t seem to mind. They smile warmly when they see me hesitate, unsure of how to respond. While I may have been an outsider, I certainly didn’t feel like one.

As Bilal takes off his slippers and steps into the mosque, we bid him farewell. Closing the door behind him, he turns to give us a smile and a thumbs up. 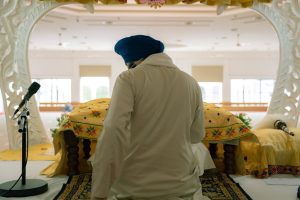 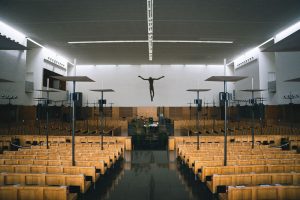