Photography by Samuel Soh, except photos of Kallang Trivista.

On 26 June 2018, former residents of Rochor Centre finally had their iconic homes demolished seven years after they first received notice that they were part of the Selective En bloc Redevelopment Scheme (SERS).

In the years after the announcement, Rochor Centre’s final days followed a sickeningly familiar narrative. Everytime a heritage landmark is torn down to make way for the nation’s progress, Singapore collectively goes through the five stages of grief.

First, there is denial, which is unexpectedly short-lived.

Then, bargaining. Someone somewhere decides to create a petition on Change.org and manages to get thousands of signatures, hoping this will encourage the government to reverse their decision.

Following its glorious failure, depression sets in. During this stage, the initial anger underpinning every photo essay and commentary gives way to a blanket of nostalgia. Several events pop up in remembrance of the landmark.

And finally, acceptance. In this case, the residents of Rochor Centre began their goodbyes even before they knew their home would be put up for en bloc, aware that it was only a matter of time before the government realised their home lay on prime land, and demanded it back.

I speak with 28-year-old Samuel Soh, a former resident who lived on the second highest floor of the green block since he was born. He remembers the rumours.

“We always suspected that something was going to happen, when some shops could not get their lease renewed. But the announcement still came as a shock, primarily because we’d endured the construction of the Downtown Line right outside our flats,” he shares.

“We’d put up with it for a few years, in hopes that we’d enjoy convenience and connectivity eventually. In the end, it felt like it was for nothing.”

Samuel also recalls the day that his family got the news. Around November 2011, he was studying at home when he heard a commotion outside his door.

“I opened the front door and saw the en bloc notice pasted on it. It informed my family that we had to vacate by a certain date.”

Turns out, you don’t realise the significance of four walls until it’s wrestled from you.

Samuel remembers feeling “quite upset”, but that initial disappointment was soon exacerbated when he visited the Urban Redevelopment Authority (URA) headquarters for a school project shortly after the announcement.

There, he saw a miniature model of Singapore.

“I noticed Rochor Centre was replaced with an odd looking building that was designated as a mixed-use development. I was upset because we were told we were moving to make way for a highway, yet I go to URA and see that they’re planning to build a shopping centre or office building there,” he explains.

Samuel and the other Rochor Centre residents were set to move to the new Kallang Trivista. Despite being right next to Kallang MRT, nothing beat the convenience of living at Rochor Centre, which is on the fringe of town.

In fact, Samuel recalls that his mother used to walk to Suntec City from home.

Yet he echoes the resignation shared by other residents, “What else could we do?”

Visiting Kallang Trivista, I speak with a couple of former residents of Rochor Centre. One of them is Mr Koh, in his mid-70s, who says there will always be people who are for and against the government’s decisions. What he feels, he adds, is irrelevant in the grand scheme of things.

70-year-old Mdm Yeoh Hong Keow shares that it made her sad to relocate at first, but she has since settled in. She enjoys that there’s a senior activity centre at the void deck, where she spends time with her fellow residents whom she knew from Rochor Centre.

Perhaps because of their age, both Mr Koh and Mdm Yeoh lamented the move as Rochor Centre provided unparalleled convenience, with the first to third storey of their blocks packed with stores. Unlike Samuel, they don’t feel the pull of nostalgia, since they reason that they have to comply with the decision regardless.

Still, they’re right. What else can you do when your sentimental memories prove to be less valuable than your country’s push for economic progress?

You make full use of the remaining time and try not to think about the end.

Knowing this, Samuel decided to take countless photos of his area once he found out about the en bloc. Many “hipsters”, as he calls the Instagrammers who descended upon Rochor Centre, had the same idea.

“Part of me was happy that attention was brought to the landmark, but I was also kind of sad and slightly angry that people were just coming here to take pictures when it has always been here,” he says.

Having made his own Christmas cards with the photos he took previously, Samuel was no stranger to amateur photography. Through his lens, he sought to capture his home and its surroundings, in the process remembering the multiple landmarks that his family witnessed being built over the years.

For instance, Samuel used to be able to see Marina Bay Sands from his unit before the South Beach Tower was constructed. His father, who lived in the area when he was younger, saw the construction of Bugis Junction, Suntec City, and the National Library.

“We could also see fireworks when NDP was held at the floating platform. Well, until South Beach was built and blocked it,” he laughs.

While I understand that getting first row tickets to witness the Singapore landscape undergoing massive redevelopment contributed to his memories of Rochor Centre, I sense that Rochor Centre means something deeper to Samuel.

Even as he animatedly expresses his feelings about Rochor Centre, there is an oddly calming presence about him, as though he has weathered a storm.

Then as Samuel pulls up photos of the spectacular view from his unit, which he captured on multiple occasions, he opens up.

“I am a cancer survivor. I was diagnosed with leukemia when I was serving National Service. I finished chemotherapy when I was starting university freshman year in 2011.”

There was one point when Samuel was in the hospital for two straight months. Upon his release, he shares that he went home and paused at his lift lobby to take in the view.

“It was really amazing. The view put into perspective what I was fighting for,” he says.

Now a civil engineer with the Land Transport Authority (he joined LTA after graduation to improve the public transport sector), Samuel says that both living at Rochor Centre and contracting cancer inspired him to take up the job.

“As a side effect of chemotherapy, my joints degenerated. I had to go for hip replacement surgery. It was difficult getting around after that, especially going to the National University of Stairs,” he jokes, referencing NUS with a moniker known to many of its students.

In addition, public transport wasn’t as extensive back then, and he found it a hassle to get around with mobility issues.

“If you live at a vantage point for more than 20 years, you see the construction of MRT and rail projects every day. It inspired me to improve the public transport system to make it more accessible,” he explains.

“Public transport is a hot sector, which means there’s a lot of scrutiny. But I do find meaning in my job everyday, and I’m glad I have the opportunity to be there, as cliche as it may sound.”

While Samuel has warmed up to his new place in Kallang Trivista over the last two years, it didn’t originally appeal to him because it sits on the outskirts of Geylang and the red light district.

After hearing his story, however, I understand his reservations. After all, Rochor Centre was an integral part of his recovery from leukemia. Whenever he stepped out of his house, the bird’s eye view of Singapore reminded him of what was worth living for.

As of yesterday, there are no more houses at Rochor Centre.

But for Samuel and other former residents, it will always be home.

Have something to say about this story? Write to us: community@ricemedia.co.
Share to
Related Articles 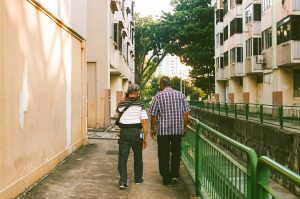 The Flag Of My Childhood: An Ode To Serangoon Avenue 3

Photography by Marisse Caine. What does it mean to be Singaporean? Many will say that being Singaporean means speaking Singlish, or being kiasu. But in recent years, it can feel like being Singaporean is all about being in a constant state of change—constantly measuring trade-offs a