When the news broke, everyone on the internet mocked him for being a moron.

It seems all too simple. Why would a church with infinite money use Sampans? Who is the anonymous ‘tip-off’? Who the hell makes their escape from Pulau Ubin? If he really wanted to run, why didn’t he just pray for Jesus to teleport him away like a normal person?

Something is amiss here and we are not seeing the bigger picture.

This is so obvious, I can’t believe our police didn’t think of it.

Chew Eng Han was not trying to escape Singapore on a sampan. That would be stupid AF. Instead, the sampan is just taking him to rendezvous with City Harvest Church’s top-secret nuclear submarine — The H.M.S China Wine.

Once he makes contact, he can disappear beneath the waves forever.

It makes perfect sense. CHC spent more than $20 million ‘promoting Sun Ho’s career’, but China Wine looks like it was made for $2.50. Clearly, they spent all the money building a submarine and training for Admiral Sun Ho.

We must be on our alert. 20,000 leagues under the sea, the nuclear-armed H.M.S China Wine is waiting to unleash 2000-megatons of bad music videos.

Theory 2 – Chew Was Running From the GST Hike

Chew was sentenced to three years in prison. The GST hike is in exactly three years.

Changi prison doesn’t scare Chew. He was obviously running away from the 9% GST that he would have to pay when he is released in 2021.

This explains the last-minute timing of his escape. After watching Minister Heng Swee Keat‘s speech on Monday, he probably decided that life after prison was not worth living and made a run for it.

Balls to him for doing what everyone wanted to do after watching the Budget speech. It goes to show: you can escape justice, but no one ever escapes the GST.

After watching China Wine twenty times, I had to poke my eyes out with red hot needles.

At the same time, I gained new insight on why Sun Ho’s music career failed despite her angelic voice and killer dance moves: They forgot to make it rain in the video.

Everyone knows that you need to throw money in the air if you are making a rap video. It’s the rap version of Lo Hei.

That’s why Chew was on a speedboat with $5000. They were obviously filming a sequel to Sun Ho’s China Wine and they were going to do it RIGHT this time.

Theory 4 – Chew Was Going To Start A Military Coup

One thing remains unexplained about this escape – Why Pulau Ubin? Who escapes Singapore via Pulau Ubin??

Malaysia is North and Indo is South, why would anyone sail east from Ubin when there’s nothing there but… Tekong?

Folks, this is worse than we thought. Chew was not running from Singapore, he was going to Tekong to start a military coup. He was carrying $5000 because he needed cash to bribe unhappy recruits into overthrowing their BMT officers.

Having removed BMTC’s leadership, Tekong was to be declared the ‘Republic of City Harvest’, where he would lead an amphibious invasion of Changi, where Kong Hee just happens to be staying.

Theory 5 – He was Actually Going Fishing

Hear me out, because this one sounds totally insane.

What if he was really fishing?

Our editor is an avid fisherman and he confirms that Chew’s fishing rod is indeed a fishing rod. He also confirmed that in open-sea fishing, money and mobile phones can be used as bait if you don’t have any worms.

It makes so much sense if you sheeple would just open your eyes. If you are going to prison tomorrow, why not live large and fish with $50 dollar bills?

#PrayForChew, he is obviously an innocent victim of your justice system.

Disclaimer: The H.M.S China Wine was last spotted in Loch Ness, buying tinfoil from Tupac. In other words, this is satire. 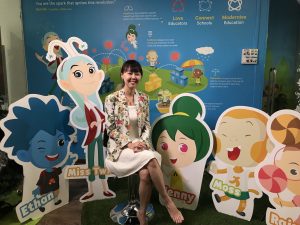 All images from LittleLives. Early childhood education is a balancing act designed to send even the most chill and level-headed teacher spiralling into burnout.  Stuck with more than 20 restless and energetic tiny people every day, early childhood teachers constantly juggle between placating Look at this pastor's wife. Since it's Easter Sunday, allow me to say this not as a journalist, but as a Christian. The best thing you can do with history is learn from it.