Yesterday is Just A Number “The slowdown starts here,” Kat bubbles, as we barrel over the bridge from the mainland and I put pressure to the brakes. The clouds, gravid and grey, are rolling in just a little quicker than I’m driving. I’m wondering at our optimism in packing swimsuits, but even the impending storm does nothing to dampen Kat’s enthusiasm.

Maybe it wasn’t the best idea to book a poolside staycation in the middle of monsoon season, but this is my present to Kat this Christmas: A vacation. It strikes me when I’m comparing the size of our bags that I have forgotten to bring pyjamas.

“Tell me we aren’t sharing a bed with you naked,” she deadpans as we traipse from the car park to the reception of the hotel, “We’re not at that stage in our friendship.”

I giggle, but something in her cadence triggers memories of warm arms and heavy eyelids. It’s been a long while, though. And I can only look back on those hazy afternoons with distant fondness. I’m not the same person I was then.

Noticing the falter in my step, Kat bumps into my shoulder. “We’re going to have the best weekend,” she chirps. I push my sunglasses up into my hair and beam back at her.

At least some of them must miss their own shores.

Our room isn’t going to be ready for another hour, so we spend our time wandering around the hotel doing reconnaissance. There are two pools—one is deserted and the other appears to have only a couple of small children bobbing around happily—so Kat is extremely pleased and very excited to tan.

We make a game out of hunting for peacocks to Snapchat, but don’t manage to find any. Although the hotel is clearly in need of a fresh coat of paint, it’s very Instagrammable. Our use of #blessed is only 80% ironic.

Kat loves photography. Her Instagram profile is carefully curated and meticulously edited; mine looks like a slapdash collage of the same five faces on repeat. She circles a gazebo, iPhone at the ready. I wander down a shabbily maintained path, hopping from flagstone to flagstone. “Let me know if you find Narnia,” she hollers helpfully while ducking under an awning to get a shot of the ocean through latticed steel arches.

I don’t find Narnia, but I do end up on a wooden deck littered with dried leaves and flimsy twigs tucked away in a corner of the grounds. The ocean is barely visible through the trees but I can still hear it, steady as a heartbeat, breaking against the beach somewhere below us. I don’t bother taking a photograph.

The moment seeps into my skin.

Earlier this year, I was walking along the beach at East Coast Park in the dead of the night, swimming in a companionship that was, at the time, as easy and rich as the currents in a delta. I remember pausing as we passed a gap in the palm trees, struck by how the anchored ships formed a blockade of light out in the oil-slick darkness.

“That’s how you know the industry is drying up,” he’d remarked, offhand. “They’re all sitting there because they have nowhere to go.”

I recall lying in bed that night, thinking of the hundreds of souls anchored just out of reach. At least some of them must miss their own shores.

It feels almost like I’m set adrift on the water

Our room overlooks the ocean and comes with twin beds. Kat has brought a bath bomb with her, and eyes the bathtub critically before deciding that it’s probably clean enough for her to get into without scrubbing it down with steel wool.

But first, we’re hitting the water. Kat pats herself on the back for having excellent taste in picking out my bikini, and we slather on sunblock, gather our sunglasses and assorted reading material, and head to the infinity pool upstairs.

Kat stretches out, fully horizontal, on her deck chair and begins willing the sun to shine more aggressively at her. I curl up in a deck chair in the shade, kindle in hand, but end up blinking blankly out at the world, which seems to me to be split into perfect thirds of pool, ocean, and sky. From this distance, the container ships dotting the surface of the water and beading along the seam of the horizon look like toys, brightly coloured and completely stationary.

It feels almost like I’m set adrift on the water; there’s so much blue around me that if I tilt my head the right way, I could sail right over the knife edge of the pool and into the sea like nothing could hold me back. For a moment, all I can think about is how lonely infinity is.

Then a snuffling snore drifts over from my right.

Kat is going to be a bridesmaid twice next year.

We end up being chased from our spot by the arrival of a gaggle of families armed with floats, rowdy children, and a complete disregard for peace and quiet. After finding that the other pool has also been overrun by the holiday crowd, we retire to our room, where Kat declares her intention to sit in a bath-bombed bath until she resembles a sunkissed raisin.

I plop myself down on the divan beside the windows and intend to settle comfortably into my book, but end up getting distracted by a knot of frantic bridesmaids sliding into a full meltdown outside.

Kat demands to know what’s happening when she emerges from the bathroom in a cloud of strawberry-scented steam. I have gathered that the calligraphed notecards on which guests may pen their well wishes to the happy couple has been left back at a bridesmaid’s home in Woodlands. Kat winces, and joins me in peering voyeuristically at the unfolding drama.

Kat is going to be a bridesmaid twice next year; her two other best friends are getting married, and she’s been roped in to facilitate things like hen parties and seating charts. She scrunches up her nose and shrugs when I enquire as to what monstrosity I’m going to be wearing at her wedding.

“I’m not sure if Walt believes in marriage,” she says slowly. “It’s a little too soon to be thinking about it—I mean, we’ve only been together for a couple of months. But I reckon that if we really want to spend the rest of our lives together and we don’t want children, it shouldn’t matter if we’re married or not as long as we’re sure that we want the other around.”

That’s fair, I muse. It must be nice to be sure.

Kat slips an arm around my shoulders. “We all tell you to be careful because we love you,” she murmurs. “We can’t tell you how long you should keep your guard up for, but it takes a certain sort of courage to consistently let people come close enough to decide if they fit into your life. It hurts when they don’t, but that doesn’t mean that you’ve failed at anything. It just means that you tried, and that’s what’s important.”

In the tableau below us, someone who looks like she’s probably the bride (in a dressing gown with her hair halfway to being perfectly coiffed) has arrived, and has initiated a group hug with her bridesmaids. It’s too far up to see her face, but the hum of anxiety appears to have lessened.

I lean into Kat and tuck my feet under me. She pats my back until I exhale, long and low. The loosening in my chest feels a lot like relief.

Then again, these women are beautiful for a living.

“What I love about this is that all these women are beautiful, but the same woman may not be as beautiful to me as she is to you,” Kat mumbles around her face-mask.

“Thank god you brought extra,” she sniggers, and I roll my eyes and wrap my bathrobe a little tighter around me.

On the television screen, Bruno Mars is singing about women measuring 37-27-42 while significantly slimmer – healthy, but definitely not chunky – girls dance down the Victoria’s Secret runway. This is probably one of the two fashion shows out there where the girls smile, and it’s fun to watch because everyone is so obviously having a great time. Kat squints at their abs and pats her own belly contentedly. “I would say that watching this after eating enough for four people is damaging to my self-esteem, but I’m just so happy.”

Then again, these women are beautiful for a living. If the amount of money I earned was directly correlated to how good I looked in my underwear, I probably would do a lot more yoga and eat less often at McDonald’s.

“I probably should get started at a gym again,” Kat grouses. “But I just don’t want to sign up for a membership and then have the entire thing fold around my ears again.”

I suggest that she does yoga with me, but she isn’t sold. “I’m the most inflexible thing ever,” she protests. “I can’t even touch my toes.”

It’s not about flexibility, though – and to be honest, yoga for me isn’t even really about yoga. I’d signed up for yoga classes thinking that since my love life wasn’t working out, I might as well work out.

Surprisingly, this endeavour has been largely rewarding. I’m not nearly good enough to look anything close to graceful while wobbling on one foot with the other extended behind me, but there is peace in not having to be concerned about anything else apart from the immediate danger of falling flat on my face.

Kat points out that I have years of ballet classes behind me. But gone are the days when I could slide into a split cold, and it has been a struggle to find the gravity which I used to draw unthinkingly from to pirouette.

But that, I suppose, is the point of practice: My body doesn’t have to remember how to move. I can no longer unfold my limbs in an arabesque, but I am finding out that my arms are stronger than I thought they were.

You don’t have to chat him up just because he’s the only bird around.

The next morning, we pass through the lobby of a banquet hall on our way to the reception. Through an open door, we see hotel staff methodically stripping linen from tables and untying bouquets of flowers from columns. The carpet is still littered with last night’s confetti. Kat almost steps on a lone, plain white stock card lying forgotten on the floor. She bends to turn it over: Geraldine and Joseph both wish Daniel and Su Ann a long and happy life together. We prop the card up on a side table and wish Daniel and Su Ann, whoever and wherever they are, love and fulfilment.

Upon strolling out of the hotel after checking out, we come across three female peacocks sidling up to a brightly plumed male. As we walk past, Kat advises the females that they could probably do better.

“He’s a little fat,” she tells them. “You don’t have to chat him up just because he’s the only bird around.” The male peacock squawks indignantly at us, but we only wave cheerfully at him before carrying on.

Kat hands me my sunglasses as we turn out onto the bridge towards the mainland. I roll the windows down and skip through my playlist until I reach our favourite song from the fashion show we watched last night. The wind whips our hair into our faces as I accelerate down the road. 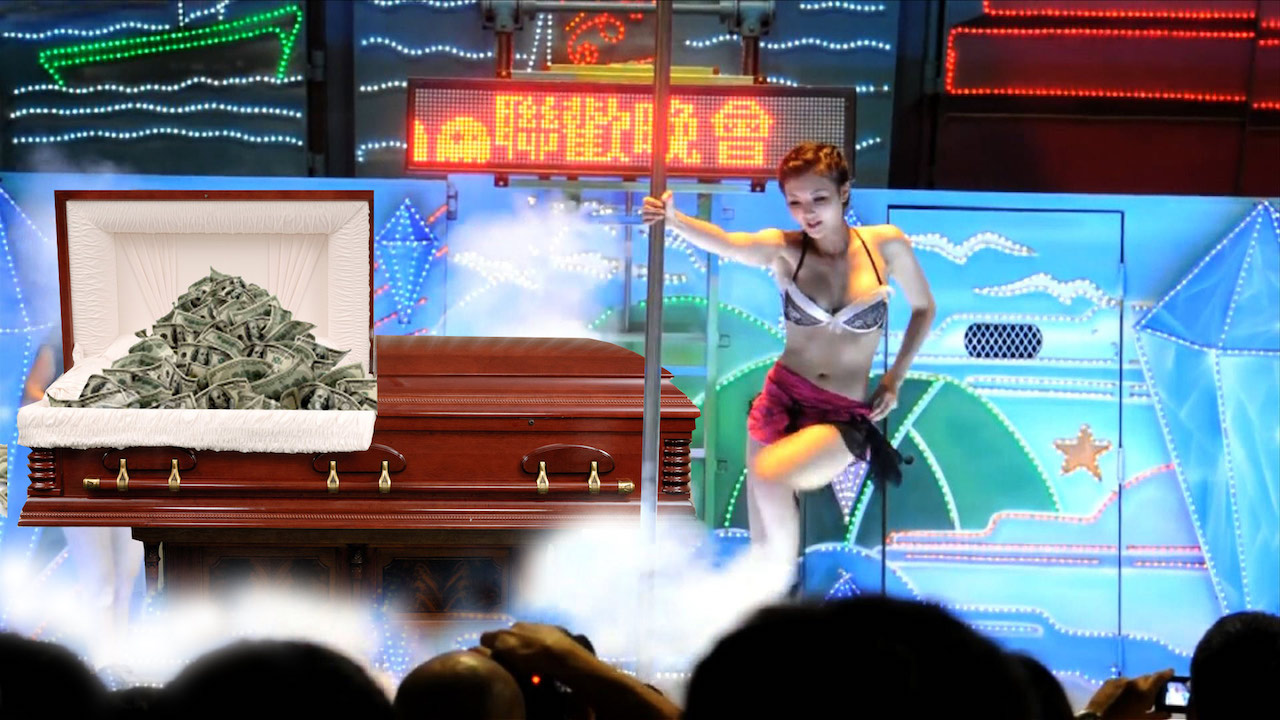