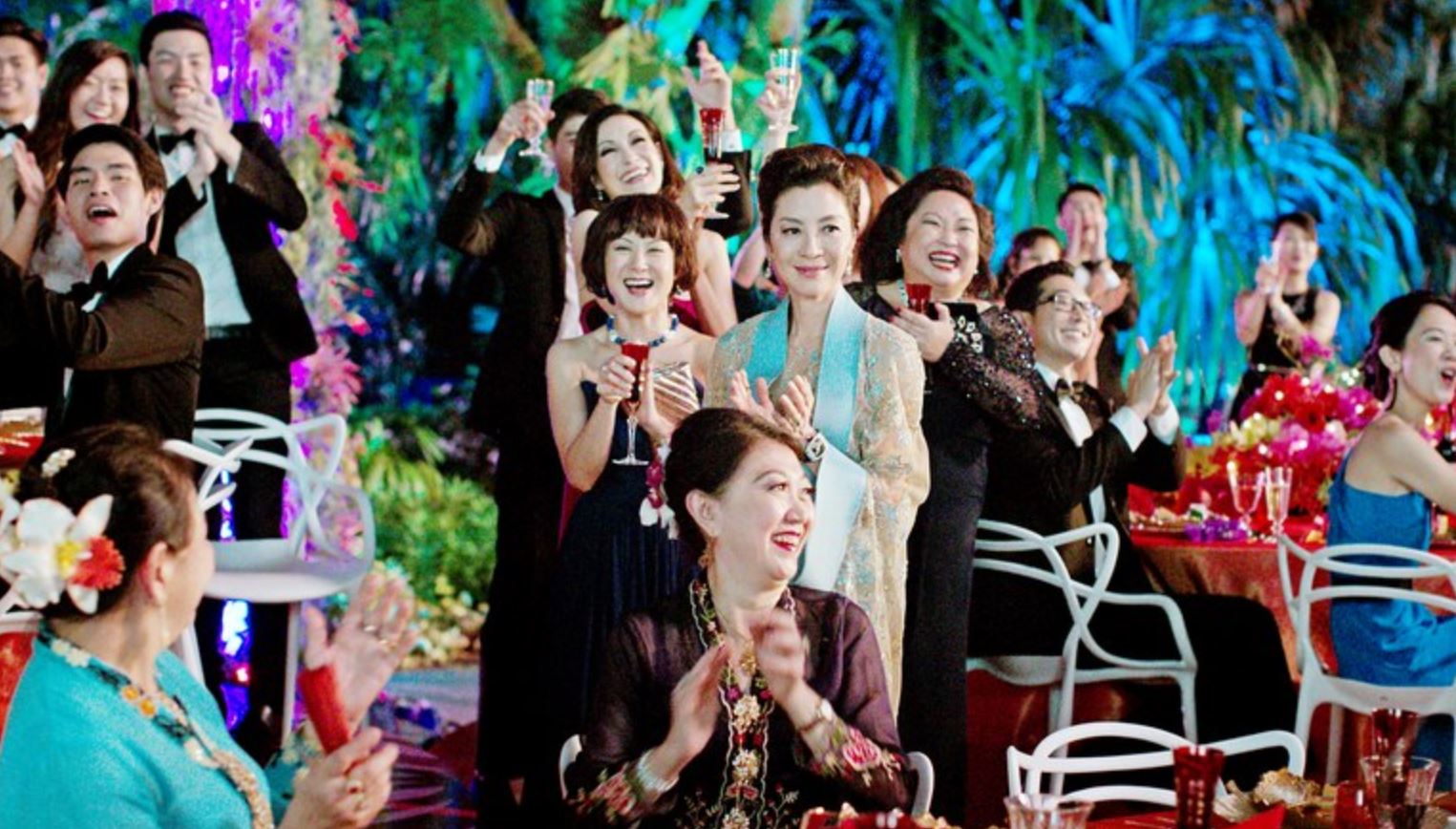 Ever since the trailer dropped, there has been a biblical deluge of articles asking this question. Some critics have called it a ‘watershed’ for Asian-Americans, while others have called it Singapore’s saddest moment because it includes no minorities. Depending on who you ask, it is either the greatest win for Hollywood diversity, a tepid flop, the work of a masterful chao keng warrior, or a commendable baby step towards greater representation.

Everything that can be said about this subject has been said. So I’m not going to bother repeating the arguments and counter-arguments with less eloquence and passion. The verdict really depends on whether you see this movie as a ‘cultural moment’ or as a two-hour cigarette break with MBS in the background. My review will be doing the latter.

I really wanted to shit on Crazy Rich Asians. Partly, because I don’t really care for rom-coms, but mainly because my dead-end job as a ‘content writer’ would be so much easier if this movie was absolute trash. My pitchfork was ready for the lame jokes, the non-existent chemistry, the cringe-worthy intimacy, and the hilarious inaccuracies.

Unfortunately, it was not meant to be.

For the most part, CRA is a perfectly watchable crowd-pleaser. It stole the plot and jokes of every single romantic comedy ever made—from the melodramatic running away to the evil mother-in-law—but the heist was so beautifully done that you can’t help but go “awww” and chuckle with indulgence.

Nick Young (Henry Golding) and Rachel Chu (Constance Wu) are a happy yuppie couple living in New York City. Rachel is a economics professor specialising in game theory while Nick Young is her adorable boyfriend who does adorable boyfriend things like ‘borrowing’ her Netflix account and stealing food from her plate.

However, their idyllic life of gentrifying New York one cafe at a time is thrown into chaos when Nick brings Rachel to Gatsby’s Mansion Singapore. Lo and behold, Rachel discovers that Nick is not just any Tom, Nick or Harry. He is The Nick Young, Singapore’s richest and most eligible  Lannister bachelor. His family is so obscenely wealthy that you begin to feel sorry for our Emeritus Senior Minister Goh Chok Tong and his mediocre cabinet.

Sadly for Rachel, almost everyone in Singapore hates her. Nick’s Dominatrix/Mother Eleanor Young (Michelle Yeoh) hates her because she is too ‘American’. The gold-diggers (Fiona Xie and Co.) hate her because she has struck gold. Even the aunts and cousins hate her for reasons I still don’t understand. Soon, their relationship is on the rocks and Rachel must enlist her weird friend Peik Lin (Awkwafina) and a motley crew of (equally wealthy) misfits to fight back.

Pretty standard stuff, and it would be entirely forgettable if CRA wasn’t the most stylishly-shot motherfucker ever, with decent cinematography, music, and set design. Don’t get me wrong, Henry Golding is a functional leading man, but what redeems the movie is visual appeal.

There is a scene at the very beginning where a passing Singaporean socialite discovers our couple in NYC and sends a photo of them to the kaypohs back home. The scene that follows—a montage of colourful Emojis and curious faces lit by iPhone screens—is probably the best depiction of social media stalking on the big screen.

Likewise for the family parties and that wedding at Chijmes. You may be a cynical asshole who has seen every single wedding, and then some, but it’s hard not to feel a flutter of something resembling life in the black void where your heart once lived. The fairy lights, the water, and the acoustic Elvis cover will make you catch feels, if only for a brief second.

Henry Golding has done an admirable job for someone who used to do Bear Grylls cosplay while Constance Wu is eh, bland but attractive? Michelle Yeoh and Tan Kheng Hua (Rachel’s Mom) are uninteresting but it’s not really their fault. Super-Realistic-Traditional-Tiger-Mother is  a tired role that doesn’t allow for much more than scowls and stern looks.

And to be fair, just looking at Michelle Yeoh’s rigid smile made me feel like a total disappointment.

This movie would be a lump of stale congee if not for its supporting cast of wackjobs. The ‘serious’ couples are so perfect and unmessy that it’s a relief when Stupid finally shows up: in the form of Awkwafina, Ken Jeong, and Jimmy O. Yang with a bazooka. It might be gag comedy, but it’s well-executed and cringe-free in the way that much of local comedy is not.

In retrospect, don’t make your Prince Charming so perfect that he resembles a wooden plank.

Does this movie have anything to say about wealth, family, or craziness?

It tries, but for the most part—no. Michelle Yeoh’s character talks at length about family values and the importance of tradition, but what are those values and why do they matter is a issue that is left maddeningly vague. She opposes Rachel because Americans are all about pursuing passion but we never get a coherent philosophy beyond “family good, individualism bad”.

The only interesting ‘issue’ involves Pierre Png, who plays a insecure commoner who married rich girl Astrid (Gemma Chan). Not gonna spoil it but this subplot explores the connection between money and masculinity. However, the amount of screentime they get is not nearly enough for any more than a touch-and-go.

If you’re watching this to get a glimpse of your homeland, don’t fucking bother unless you are Kim Lim.

There is no Singapore you can recognise in Crazy Rich Asians. This is the Singapore as playground for Johor Princes and millionaire pastors. This is the Singapore where Eduardo Saverin parks his pocket money and where Gucci Grace Mugabe does her botox. For 90% of its runtime, the action alternates between the private island you can’t afford and the Bukit Timah Mansion you can’t legally access.

That being said, it didn’t prevent STB from inserting …

Jack Neo must have really spoiled our government when it comes to product placement because I spent half the movie wishing that STB could kindly remove its massive balls from my face.

Some critics have lambasted CRA as a showreel for Singapore tourism and I agree with this judgement. You will struggle to find many scenes that do not double as a postcard for “Passion Made Possible”. For its entire length, the camera lingers needlessly on MBS, on Clarke Quay’s boats and in one ludicrous scene, upon the workers unloading durians outside Keong Saik.

“Hawker centres are great. Many generations have perfected the recipes,” he explains, slightly dead but oh-so earnest.

Looking back at what I wrote, I feel slightly ashamed at my own rather predictable nit-picking. For the most part, the movie is quite enjoyable if you don’t take it too seriously. There is humour and the dialogue is crisp and our romantic leads are a convincing pair by Hollywood standards.

The entire experience is not unlike watching the Trump-Kim Summit. Nothing of substance but plenty of spectacle to gawk at.

And tourist attractions lingering in the backdrop like a nosy aunt at CNY.

So is Crazy Rich Asians worth the money? The answer depends entirely on your expectations. If you’re looking for a watershed moment for Singaporean representation, then this movie is an atrocity because there are no minority roles (unless you count Henry Golding or the Filipino stars), and every character worth less than $500 million is out-of-focus.

If you’re just looking for a chick flick to while away your afternoon, this movie is certainly better than The Spy Who Dumped Me. Not exactly the mind-blowing orgasm promised by the American media, but not too shabby for your date night.

Agree or disagree with our verdict? Don’t plan to catch the movie? Tell us why at community@ricemedia.co.
Share to
Related Articles