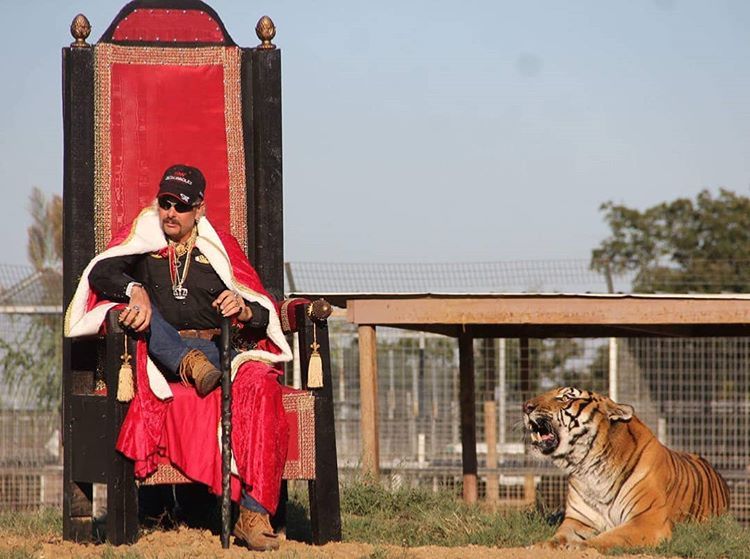 Watching Netflix’s Tiger King: Murder, Mayhem & Madness is like watching a dumpster fire; if the dumpster fire was inside a train wreck, which has been driven off the cliff, because Donald Trump and Kanye West are fighting each other for the wheel.

Words like ‘batshit’ or ‘clusterfuck’ are not enough to describe it, and neither is ‘shitshow’. It is ostensibly a documentary, but I could not have dreamed up the story even if I snorted Pablo Escobar’s entire inventory, in one long line running from Medellin to Montreal.

The story begins in ‘Bumfuck’ Oklahoma, where a man named Joe Exotic runs the ‘World’s Largest Big Cat Park’. There are 200 or so lions, tigers, and other dangerous animals, but the main attraction is Joe himself—a man who makes Steven Lim look like Heng Swee Keat.

Joe is a flamboyant gay man with two husbands, several hundred guns, a bleached-blonde mullet, 19 piercings, and a special fondness for tigers. He is also a two-time presidential candidate (Libertarian), a meth addict, and a possible alligator arsonist. Meaning, he set fire to alligators. His own alligators. He has twenty of them stored inside a shed, next to the hard drives containing incriminating evidence on his ‘zoo’.  Like any normal person, he decided to stay one step ahead of the law by burning everything to a crisp, reptiles and all.
To fund the alligator-burning and the guns, he breeds tigers for sale and gives tours which allow guests to play with baby tiger cubs. This incurs the wrath of Carole Baskin, an ‘animal-rights-activist’ who runs a wildlife sanctuary called Big Cat Rescue. She accuses Joe of animal abuse, so he retaliates by accusing Carole of murdering her millionaire ex-husband, who disappeared under mysterious circumstances—possibly into the stomach of a tiger. This allegation sparks a feud, which is the main subject of our docudrama.
If Tiger King doesn’t distract you from Covid-19, nothing will. In fact, the show is so insane it will distract you from anything short of a meth addiction. It is like a 7-hour roller-coaster ride which only goes downhill. Every time you think it cannot possibly get more retarded—SURPRISE MOTHERFUCKERS. Turns out Carole, the crazy cat lady, was a former —— and Joe’s husbands are actually —— and the pizza they ate on camera was made from ——.
Personally, I lost it when they introduced Bhagavan ‘Doc’ Antle, a yoga-guru-exotic-animal-trainer with 3-9 wives and a PhD in ‘Mystical science’—from the ‘Chinese Science Foundation’. My colleague fell off his chair when they played Joe Exotic’s self-published country hit single I Saw A Tiger. Another friend lasted 3 minutes before switching to something more sensible, so as not to spit out his dinner.

More sensible in this case, meaning literally anything at all.

However, if you’re the kind who cannot look away from traffic accidents, or three-legged chickens, Tiger King is peak TV.  It combines the trashy appeal of reality shows like Here Comes Honey Boo Boo with the suspense of a True Crime mystery, but with endangered tigers sprinkled on top.
How can you say no to something like that? I didn’t, and thus spent a feverish night watching Joe Exotic flounce about with a pistol in each holster and a padlock in his dick piercing, telling us about his Joe Exotic Tiger Print Underwear Line.

When asked if he wore the underwear himself, he replies: “I don’t wear underwear.”

Did I learn anything from the documentary? Fuck no. But it is so well-made and so entertaining that, by the end, I felt sympathy for Joe Exotic; as one might for an alien who has crash-landed on earth and is doing his best to fit in.
Despite his despicable behaviour, he did come across as genuine and passionate. Unlike the other sleazeballs featured in this documentary, Joe Exotic does acknowledge some of his mistakes (keeping chimpanzees in a tiny cage) and is upfront about the (bad) practices at his zoo. He may be fucking insane, but he is not deceitful. Nor does he pretend to be a saint. As one Joe Exotic supporter in the Oklahoma gubernatorial election put it: ‘He’s not afraid to say what he wants to say, and do what he wants to do.’
And then I realise, this must be how Donald Trump got elected. If 19% of Oklahoma’s libertarians voted for Joe Exotic: Tiger King, then Trump’s victory in 2016 should come as no surprise to anyone. So I guess I did learn something after all: America got off lightly with President Trump. Given the majestic lunatics which roam the land of the free, I’m honestly surprised the White House has no tigers. Only monkeys throwing shit.
To help a real wildlife sanctuary, consider donating to Acres. For human-related queries, contact us at community@ricemedia.co.
More In Entertainment
Share to
Related Articles