It’s been almost two months since lockdown began, and a certain level of stress and anxiety has plagued many of us. Daily, we ask ourselves: What has happened to the life we once knew? When will things go back to normal? Is it normal that I feel so restless all the time?

So we seek comfort. For some, meditation helps focus inward, and gives them a moment to breathe through their emotions. Others may reach for a cigarette to calm their frazzled nerves. When things become uncertain, these actions help us feel in control again.

While there is evidence that many people have developed unhealthy habits in this time, the opposite has also happened: lockdown has allowed people to look at their coping mechanisms, and find a better way to incorporate them in their routine. Most importantly, this time has allowed people with toxic habits to turn them into something potentially beneficial.

Alyshea, a 21-year-old university student, has had an unhealthy relationship with food and exercise since the age of 13. “I was on the chubbier side when I was younger, and I was bullied for being overweight,” she said. Food is what makes her feel happy and comfortable when times are rough: “Usually, I binge eat to feel in control,” she said. “With food, I know what I am craving, so if I eat that, I will be satisfied.”

But despite that, memories of her bullying mean she still struggles with her eating, switching between binging and abstinence.

Interlaced with her struggle with food is her toxic relationship with exercise. “I used to go to the gym 5 or 6 times a week for purely aesthetic reasons. Sometimes I would focus only on glute exercises for a whole week, because I thought that was what people liked nowadays, and what would validate me.” Going to the gym didn’t make her feel good—as it should—and it reinforced beliefs that she had to look a certain way to be valued.

Since lockdown, Alyshea said she has been able to rekindle a positive relationship with both eating and exercise. She has encouraged herself to develop an attitude that food is her fuel, and that it’s one of the things that can make her feel better in this time, not worse. “I am so lucky to have a fridge full of food when so many others don’t,” she said, “and realising that has allowed me to take the time to get creative, bake, make food that will nourish my body and mind. That will comfort me in this time, not binge eating or starving.”

As for exercise, “going into lockdown was a huge relief” for Alyshea, as she didn’t have to battle herself on whether she was going to the gym everyday or not. Instead, the natural craving for being outside led to her taking up long walks in the afternoons.

“I have a new relationship with exercise. Now I see it as my friend. Walking is my daily self-care routine. I get some sunlight, listen to music, and work through my thoughts and emotions. It’s really soothing for me.”

While it’s important to establish a healthy relationship with eating both in and out of lockdown, there is no optimal level that’s acceptable for a habit like smoking. But this time period has still been significant for smokers, as they have used the time and space at home to reflect on how they can cut back on the habit for an improved lifestyle.

I was surprised when I found out that Cheryl, a 24-year-old professional in tech, said she had completely stopped smoking since the Circuit Breaker was implemented.

“I haven’t smoked for 6 weeks,” she said. “Given that I’m at home with my family, I would have to sneak out to smoke, which isn’t worth it in my opinion.”

“But I think what has made it so easy to stop is how I have not been in the office, or in scenarios that involve drinking—those are my triggers,” she explained.

From home, Cheryl finds it easier to manage her stressful workload, and in turn, she doesn’t find herself craving cigarettes. But she said she can see herself falling into her old habits—“I will hopefully be smoking a lot less though.”

In India, lockdown measures became so extreme that millions of smokers were forced to go cold turkey like Cheryl. And for many, this meant realising how their smoking habits were closely tied to external factors, rather than physical cravings.

Siddharth, an IT professional, told ThePrint that because “nobody is constantly breathing down my neck” and “I’m not stuck in traffic everyday,” it’s actually been “so easy to not smoke for so long.”

Cheryl’s or Siddharth’s stories shed light on how certain habits are easier to break when we identify our external triggers. But they still account for the minority of smokers. Whereas some have been able to stop, the anxieties being felt by many at this time have exacerbated the addiction to smoking.

Dan, a 33-year old entrepreneur, smokes when he is alone. So now that the CB has him cooped up at home and bored, he has an increased tendency to light up a cigarette. And because he can’t access e-cigarettes (as they aren’t legally sold in Singapore), he feels worse.

But the CB has brought back a routine around smoking conventional cigarettes, and with it a way to understand his habits.  “I don’t only do it when I’m bored. It’s something I turn to following every task in my day,” he said. “If I have a meeting, I’ll smoke after. If I have a coffee, I’ll smoke after.”

Another activity that many have turned to during lockdown is gaming. Various gaming companies across the spectrum have reported soaring numbers of new players, but this isn’t necessarily bad considering gaming can help stop loneliness.

In the first weeks of lockdown, Felix, a 23-year-old student, said he struggled to control his gaming habits. “I would postpone working on my assignments to game, and that meant some nights I had to study until 3am to make up for the lost time.”

But after a few days, gaming turned out to be a saviour for him. This is largely because of the social and lifelike interface of his game of choice: Animal Crossing.

“It’s a real-life simulator,” Felix explained to me. “Every player receives a deserted island and you’re supposed to turn it into a fully developed community with services, shops, museums, and so on. Then you can trade, shop and interact with other islands.”

Many elements in the game are time dependent, and follow the real world clock. Meaning that players need to log on at certain times of the day for access to certain opportunities.

So Felix set a schedule for his gaming in accordance to various opportunities on Animal Crossing, and this has allowed him to build a healthy routine at home.

He even said that his therapist, with whom he Skypes once a week, is supportive of his gaming.  “There’s been a sort of a unified response from therapists that it’s an excellent game to cope with the absence of a routine, because you can build one around the game,” he said.

Another game that simulates real life is EveOnline, which has also garnered popularity worldwide during the coronavirus outbreak. Hilmar Pétursson, chief executive of CCP Games, which owns Eve Online, told the BBC that gaming is potentially healthier than many other ‘distractions’ people turn to at home: “Netflix and all that is good for passing time, but that doesn’t really give you a social context. And people are craving a social context.”

Felix said that the social interactions on Animal Crossing help him feel connected in this time. When he feels lonely or agitated by the current state of the world, he finds it comforting to game with others.

Linda, a psychotherapist from one of Singapore’s biggest counselling clinics, told me that many of her clients have learned about their boundaries in lockdown, and this has helped them create healthy routines for themselves.

“Normally, we are too busy and enthralled in day to day life to question some of our habits”, she said. We should always be questioning ourselves, but if that wasn’t possible until now, it’s a good time to start. “When we seek comfort, we need to ask ourselves why we are doing it: Why am I eating? Am I hungry? Or is it because I’m bored?”

“If so, why are you bored? Do you feel disconnected, or do you feel like you need a new challenge? Maybe you miss certain hobbies, or need to connect with someone. So go do that instead. Don’t just fill that gap with food or a cigarette. Those are just coping mechanisms.”

It is the first time, if not the only time, in our lives that we are so far removed from the activities that physically connected us to the outside world. And while lockdown has been stressful, we are learning a lot about ourselves.

Cheryl learned that “my smoking addiction is way less physical than it is mental.” When she removed herself from certain contexts, she noticed she didn’t crave nicotine at all. This repositioning is also what allowed Alyshea to finally take a step back and assess why she has had such a problematic relationship with food and exercise.

But if this time is an opportunity to put our behavioural routines into perspective, it may also be a time to make changes to other aspects of our lives. Linda gave me the example of one of her clients, a woman who constantly felt the pressure to keep up with the social calendar of other mums in her social circle. It sounded like a deeply entrenched ‘fear of missing out,’ or a fear of being ‘excluded.’

Now that no one is meeting up, she has made a new routine at home without the trigger that others are meeting up without her, and she feels satisfied and fulfilled by this. She has told herself that she will set new boundaries when CB is over, and that she hopes to better balance  her time.

“How many things do we do because we really want to, or because we feel we have to?” Linda said. “Now is the time for a reappraisal of ourselves, our needs, wants and desires.”

“We need to ask ourselves: when we go back, how do we want to return to our habits? Where will we draw our boundaries? You can go back and start living a life that is more fitting to your needs and likings.”

*Names have been changed to protect the privacy of the individuals featured.

Have you struggled to find a balance with your habits? Tell us at community@ricemedia.co.
Share to
Related Articles 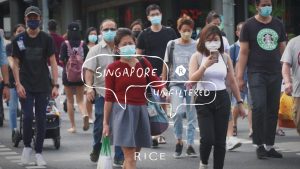