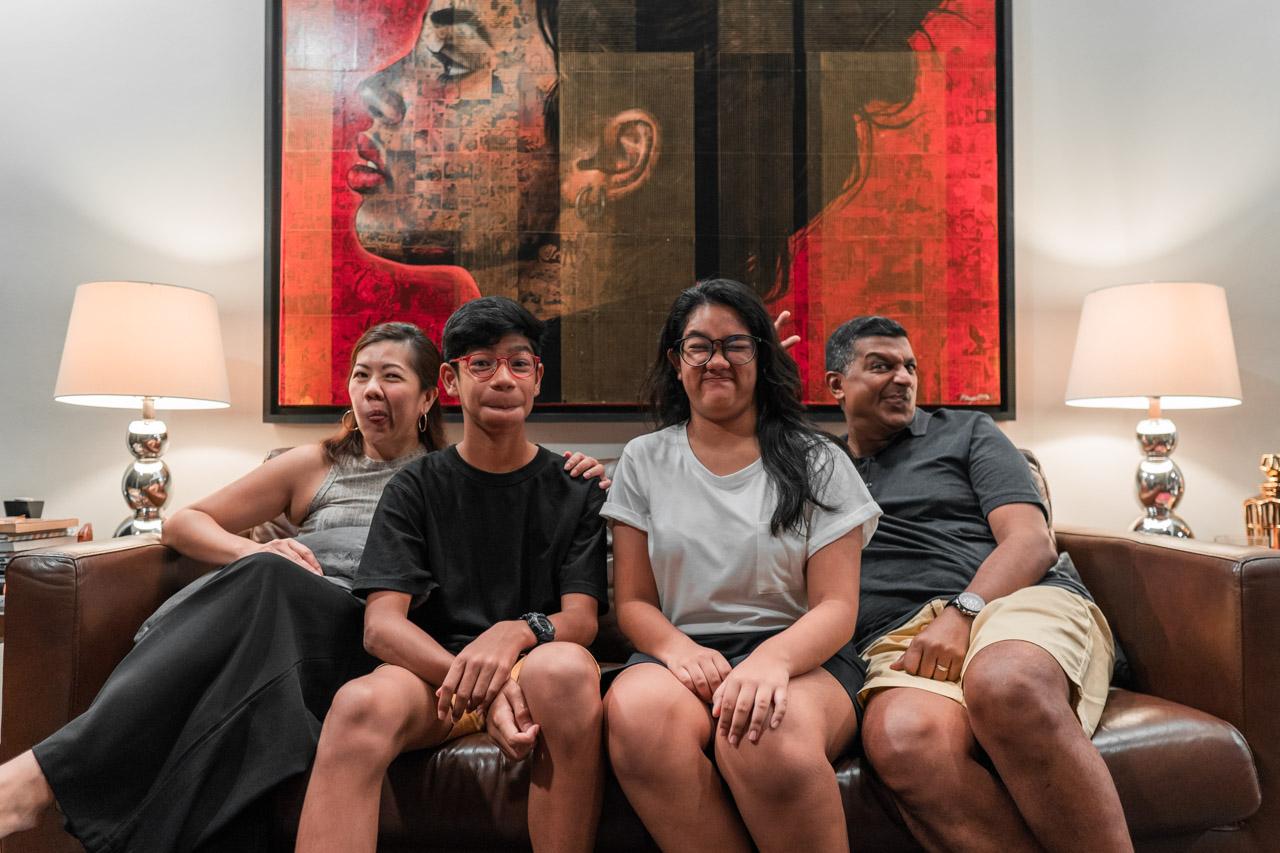 For young Muru Nagaraju, a late-night search for a bowl of noodles in 1996 turned into a lifelong commitment to a Chinese woman.

“My buddy and I had been partying at this place called JUMP until three in the morning,” recalled Muru, now 51. “After the club, we’d always go out for a late-night snack. Myra happened to be at the coffee shop. She was a mutual friend of ours, so we went up to say hi.”

Muru and Myra hit it off instantly, with Muru cracking jokes and Myra snorting with laughter between mouthfuls of bak chor mee.

While the two didn’t officially become a couple until months later, that fateful night became the first of many meetings Muru and Myra would have over food.

In many ways, food has always been a way for the couple, Muru Nagaraju and Myra Lim, 44, to navigate their 18-year marriage as a Chinese-Indian inter-ethnic family. It has helped to break barriers, expanded their worldviews, and enriched the lives of their daughter Tanisha Mei Murugesh, 15, and son Trishen Kai Murugesh, 12.

When I visited the family in their home in Serangoon, I was surprised to learn that both Tanisha and Trishen wanted to sit in for the interview. The parents chatted with their children openly, like they were all friends, and immediately, I sensed an atmosphere of freedom and openness in the Murugesh household.

When Muru met Myra’s family for the first time, he took the whole extended family out for a meal. His future Chinese in-laws were quickly won over by his generosity and sense of humour.

True to form, throughout my interview, Muru cracked jokes, some evoking laughs and others eye-rolls from his wife and children.

“People always say that our family is ‘Chindian’,” said Muru. “But why? I always change it to ‘Indianese’ because I want the Indian part to come first! Traditionally speaking, it follows the father, right?”

The joke was met with groans from Tanisha and Trishen.

“No one in my family finds this funny,” said Muru, turning to me. “But I’ve coined that phrase ‘Indianese’ ah. I’ve got the copyright.”

And how did Myra’s meeting go with her Indian in-laws?

“My mother, who’s Hindu, has always been open to me dating people of a different race. In Singapore, just statistically, for me to go out with someone who is non-Chinese is more difficult,” explained Muru. “But in the back of their minds, I think they still thought ‘why can’t you marry an Indian girl’?”

“My first impression was that Indian families are very hospitable,” said Myra. “Whenever I go to Muru’s house his mother would go out of her way to serve me food and chai. As you know, in a typical Chinese household, it’s not that way. Everything is more casual. They just put all the food on the table and everyone helps themselves.”

For the Murugeshes, Every Holiday is A Choose-Your-Own-Adventure

“We celebrate holidays on both sides,” said Myra. “Both Muru and I feel it’s important that our children get exposed to both cultures—for holidays and at the dinner table.”

For example, Myra loves dressing in a sari for Deepavali. The whole family goes all out with their festive clothing, making the annual trip to Tekka Centre to get new outfits measured and fitted. Then they would go to the Hindu temple and have a lavish Indian meal when they returned home.

“I’d have to come along and say, ‘eh Brother, that’s my wife ah. Give us the best price. Brother price, okay?'”

When Muru’s mother was alive, she also introduced the children to the Indian festivals of Thaipusam and Pongal.

On Thaipusam, a festival celebrated by the Hindu community on the full moon in the Tamil month of Thai, Tamil Indians carry the kavadi, a decorated canopy bearing the Lord Murugan from temple to temple to commemorate the occasion when Hindu goddess Parvati gave Murugan a Vel ‘spear’ to vanquish his enemies.

Prior to the festival, kavadi-bearers observe celibacy and follow a strict food and prayer regimen, in order to keep their bodies clean before the celebration. On Thaipusam, some would perform the Kavadi Attam (‘kavadi dance’) that involves the piercing of the flesh with Vel skewers that symbolises Parvati’s gift.

Then there’s Pongal, an Indian harvest festival, which was a thrill for the Murugesh children when they were younger.

“My mother-in-law would sit the whole family down around a boiling pot of rice and milk,” recalled Myra. “When the milk froth boils over, we’ll all shout ‘Pongalo pongal!’ which means let it boil over! Let it boil over in abundance!”

Then the family would sit together over a vegetarian meal and eat from banana leaves.

For Chinese holidays, the standard customs that most Chinese Singaporeans are familiar with apply for the Murugeshes.

On CNY, ang baos are handed out and auspicious phrases are shouted over yusheng. For the Mid-Autumn Festival, lanterns are hung and mooncakes are eaten.

This mixing of cultures has led to a lot of interesting observations.

“I’ve come to realise that the Chinese do it differently,” observed Muru.

“You don’t have to act a certain way to make people feel welcome in your house. They say, ‘Lai, Lai, sui bian chi, sui bian chi!’ (translation: come come! Everyone eat!). When the Chinese eat, they eat communally, which, in my opinion, is better than the traditional South Indian style, which is when someone cooks a huge batch of curry in the morning, and people help themselves individually to food throughout the day.”

To disagree with Muru, I can see the pros and cons of both cultures. The longer the curry sits in the pot from the morning onwards, the better and more fragrant it becomes throughout the day.

This mixing of cultures doesn’t just happen on holidays, it translates to the Murugeshs’ daily habits as well.

For Hindus, when they visit temples or return home, the first thing they do is wash their feet and hands. This habit is strictly enforced in the Murugesh household, by the Chinese mother no less.

“Myra did this even before dating me,” said Muru, proving that some practices are just good ideas regardless of culture.

The Murugeshes have also incorporated house-warming traditions from both cultures. When they first moved into their home, the children had fun rolling a pineapple around the house while saying auspicious Chinese phrases. Then they would sprinkle lime and a bit of the secret ingredient used by Hindus — cow’s urine — to bless their new home.

Their Take On Racism

Given their mixed heritage, one can only be curious how their experiences with racism, if any, have been in Singapore — especially in this recent climate where tensions are high due to the pandemic.

“How much time do you have?” said Muru, laughing. “You may have to spend the night and have breakfast with us tomorrow.”

The minority experience runs the gamut in Singapore. From the seemingly well-intentioned remarks like “Oh you’re lucky your kids are so fair-skinned!” or “you’re so lucky your wife is Chinese”. The implication here being that to be otherwise would be something to be ashamed of.

“I think it comes from a place of ignorance rather than ill-intent,” said Muru. “But I get it all the time. All the time. It’s just something you have to deal with.”

“It’s definitely gotten better over the years as an interracial couple in Singapore,” added Myra.

“Back in the day, some Singaporeans were not so used to seeing couples like us. But now it’s so common that no one bats an eye. Honestly, I don’t face much racism maybe because I’m in the majority. But since knowing Muru, I have become more aware of the minority experience.”

Being together as a mixed-race couple has also involved a lot of compromise. When asked for what advice they would give other inter-ethnic couples, both Muru and Myra said clearly communicating each other’s expectations is key.

“From the get-go, you have to be clear on exactly what it is about the other race and culture that you want to adopt in your life,” explained Muru. “Whether that’s religion, or certain aspects of the culture like holidays, or even just making compromises on the types of foods you eat on a daily basis. What are you going to do consciously to make it happen?”

For Myra, this meant overcoming some of her initial reservations.

“You can’t be so fixated on your own cultural practices that you don’t make room for others,” she said. “For example, when my children were born, my mother-in-law wanted to apply the Indian bindi (dot) on my children’s forehead. Initially, I was hesitant, but I’ve since learned to let it be.”

Interestingly, when it comes to dealing with prejudice, the kids describe a different experience. That’s because as Indian-Chinese, nobody knows, upon first impression, what race they actually are.

“A lot of people assume we’re Malaysians,” said Tanisha. “I feel bad when makciks start speaking Malay to me at a hawker stall or restaurant. I’d have to be like ‘oh, I’m sorry, I don’t speak Malay!’ They would look so confused. I really want to be able to converse with them.”

For their Children, The Gift of Cultural Choice

Finally, I arrive at the question for the two children, who represent the future of Singapore’s attitudes on race, religion, and other pressing social issues.

“I’d say 60-40 Chinese,” said Trishen. “Mainly because since grandma passed away, we spend the majority of our weekends with our Chinese side.”

“I want to say 50-50,” said Tanisha. “Because even though I don’t know the Indian culture as well as the Chinese culture right now, I still feel like I’m connected to the Indian part of myself. It’s in my blood. At school, most of my classmates are Chinese, but it always makes me feel good when all cultures are represented.”

For their part, the parents seemed to have left most of the issues of identity up to the children themselves. Yes, they may have selected Mandarin Chinese for them as a second language over Tamil (for practical reasons), but they also insist that both cultures be represented in their family life and at the dinner table.

The meals, holidays, and customs have enriched their lives. And with this comes the freedom to pick and choose.

For this inter-ethnic family in Singapore, life is a movable feast. Spirituality has made a comeback among millennials and zoomers of late. Can ancient medicinal systems like Ayurveda too?