Americans in Singapore Reflect on the Texas School Shooting Tragedy 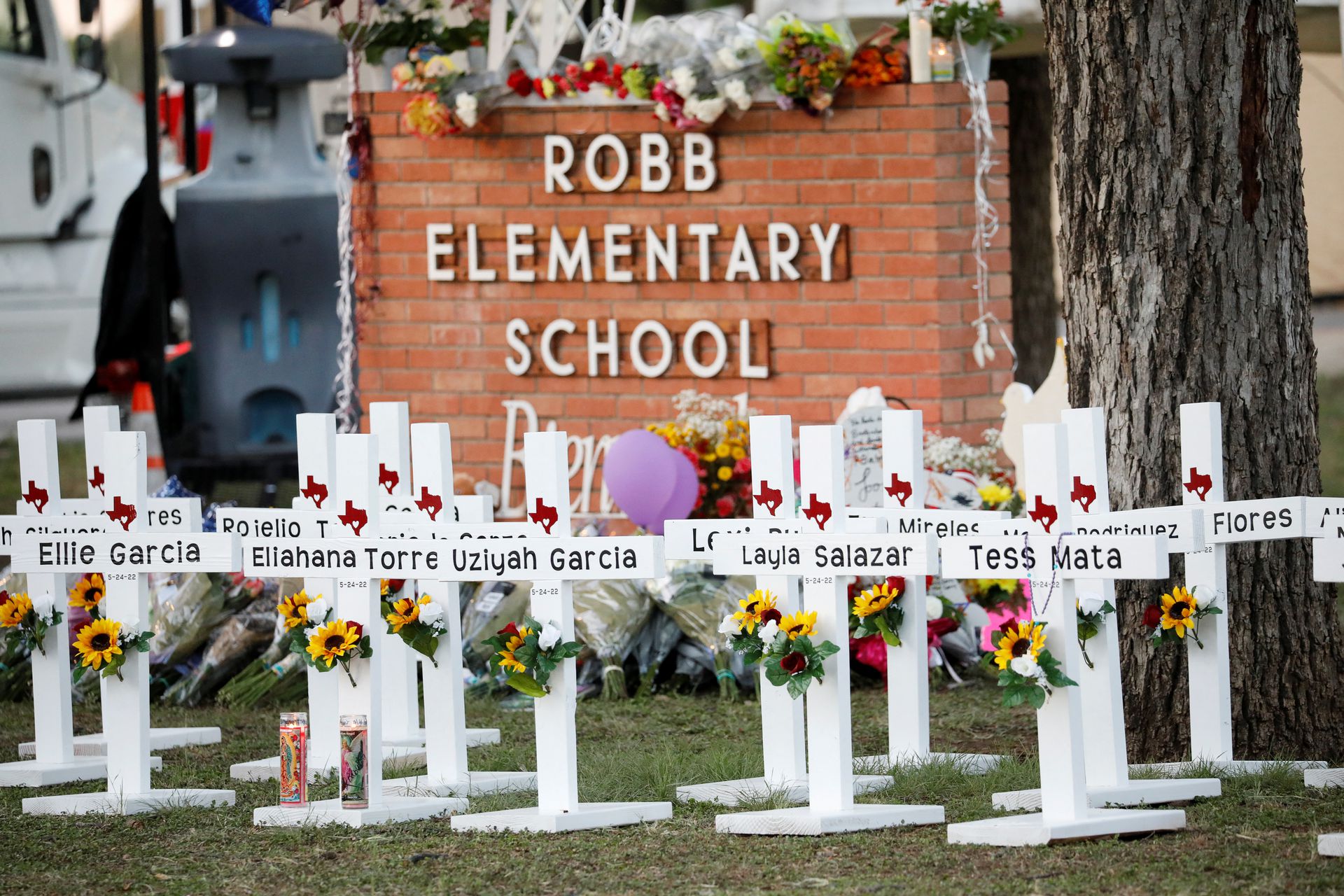 “My husband and I are trying for a baby. We’re going to bring up a child into this world one day, and everyone always asks me, oh, do you want to move back to the States? My answer has been a resounding ‘hell no’,” Monica Millington, 31, tells me over a video call. Monica is married with no children, although she hopes to have some, one day.

“I would be, in this day and age, terrified to put my children into a US school right now,” she continues. An American expatriate, Monica has been living in Singapore since 2017 and, like the rest of us, is reeling from the news of the shooting at Robb elementary school in Uvalde, Texas.

In one of the deadliest mass shootings at an elementary school since Sandy Hook and the second shooting in a matter of 10 days, the reverberations of the tragedy are felt across the world.

For some Americans residing in Singapore, the news was crushing and heartbreaking but, unfortunately, not surprising.

A familiar song of tragedy

When the news of the shooting first broke, Meeta, 53, remembers not wanting to read or think about it. Meeta is married with three children—one just finished grade 12 while the other two are still in University in the US. She used to live in Illinois before moving to Asia some 12 years ago.

“I feel numb because it keeps happening, and nothing changes,” she says. Monica seconded these sentiments, who feel that same numbness with the seemingly never-ending news cycle of mass shootings.

“In a horrible way, you just become very thick-skinned to all of this because you hear it so much, which is not how it should be, obviously. The first reaction is, oh, here we go again”.

For Meeta, as devastating and traumatic as the news is, it’s a tune she is all morosely too familiar with. “It’s the same thing. I don’t need to read it because it’s the same situation. A group of innocent people, and unfortunately, children, it’s the same story. Nothing has changed”.

To give you an idea, the shooting at Sandy Hook elementary school that killed 20 children and six staff members happened in 2012, an entire decade ago.

If we go back a little further, there was the first mass shooting at Columbine High School in 1999. That incident resulted in 13 lost lives and 21 injured.

In the face of such an unspeakable, awful event, they often elicit complex feelings that straddle between guilt and gratefulness. “You’re thankful it didn’t happen to your family, then you feel bad that you think that way because it’s a family that is very much like us. You know, the same kind of people, who’ve just dealt with the most horrendous devastating loss,” says Meeta somberly.

As the shock settles, Monica speaks of the devastation and grief that welled up inside her, “it is so big and powerful that you don’t know how to process it. It makes you feel so small”.

These feelings of sadness are often followed by disbelief and bewilderment at the state of gun control in the United States. Necia Crump, 29, half-Singaporean and half American, states in disbelief, “I can’t believe we are still going around and openly firing on humans, let alone children”. Necia finished both her high school education and university studies in the US.

“How is this still a thing?” shares Monica, both outraged and incredulous. “How do people still have access to this dangerous tool that allows them to cause such mass destruction? What is going on that is still making this possible?”

Not taking safety for granted

Having grown up in Singapore, where guns are illegal, Necia “will never understand the gun laws in the States, and I lived in a state (Arizona) that is very pro-guns”. More than that, Necia completed her high school and university in America before returning to Singapore.

During her time there, there were incidents of mass shootings that left her feeling shaken and wary, to say the least.

After every school shooting, it makes us all more scared to go to school or any public place because you just never know which lunatic has a gun and is going on a rampage,” she says.

“I can’t speak for everyone, but it’s always at the back of my head for me. I make sure I know where all exits are at all times; better be as safe as I can be than sorry,” relates Necia.

As a mother of four children, Meeta is thankful that her children spent most of their youth in India and Singapore.

“It’s a reminder, having brought up children in Singapore, that we’re fortunate that we have this opportunity to bring up our children in such a safe and rational environment.”

“The violence is terrifying. I’m living in Singapore right now, and we’re very fortunate that it’s so safe and relatively crime-free, especially compared to the rest of the world,” says Monica.

Gun control in the United States

Indeed, it is all too easy to obtain a gun in the United States, where civilian-owned firearms exceed the number of people. A glance at the Texas gun laws tells us getting a gun is no different from going to a store to pick up an appliance.

To possess a firearm in a public place without a licence to carry, you just have to be at least 21 years old, not have a prior felony conviction, not have a recent conviction for certain types of misdemeanours, not be subject to an unexpired protective order, not be restricted from possessing a firearm under federal law, and not be intoxicated, except in certain situations.

Furthermore, Texas law does not restrict who can carry a long gun; long guns include rifles. The shooter possessing two AR-15 style rifles was completely legal, as with most mass shootings in the United States, the shooters had obtained firearms legally.

Monica, a Texan herself, is blithely aware of this fact, having grown up on a ranch with guns and in a state where “guns are rampant”.

“Right now, you can walk into Walmart hypermarket and buy an assault rifle. That, to me, is just insane how easy it is. Everyone can agree that it should be difficult to get a gun, especially the types these murderers carry around,” describes Monica.

As much as Monica takes gun safety seriously, such as following the correct protocol and obtaining licensing, as clearly displayed by all the mass shootings, she feels more needs to be done to prevent anyone from getting their hands on such a dangerous weapon.

“I would love to see something like what Australia did many years ago. They just bought back all the guns and got them off of the street, out of the hands of the common person,” says Meeta. “I don’t understand why a person needs an automatic weapon or a machine gun that shoots out 50 bullets in 30 seconds to go hunt, even, you know, it doesn’t make any sense”.

Despite the spate of gun violence and mass shootings in America, political strife seems like the main stumbling block to America’s issue.

“The problem with America right now is everyone is on a different side of the fence, and everyone thinks they’re fighting each other. The Democrats fight for gun control, and the Republicans think they’re trying to take their freedoms,” Monica explains.

With such a splintered political landscape, progress is often one step forward, three steps back, or none.

“I understand the freedoms that Americans feel entitled to, but the right to bear arms is not worth it,” stresses Monica, “I don’t think hunting and all the ‘fun’ gadgets for hunting are more important than the safety of our children”.

Singapore as a vantage point

Besides, the safety Singapore affords all interviewees, viewing this tragedy from a Singapore vantage point could offer insight.

As Monica gets into friendly debates on social media, not being in America has allowed her to widen her perspective to consider differing viewpoints.

In those discussions, often with fellow Americans, she would implore them to consider what other countries are doing, saying, “I don’t think America is the only place in the world; I’m looking at what the UK is doing. I’m looking at what Australia is doing and what Singapore is doing. Maybe America should look at something outside of themselves.”

For both Necia and Meeta, the distance allows them to view America as a country far removed from themselves.

“It’s easier to look at the US and just shake my head at them. It’s more manageable to look at it as their problem and not mine anymore since I no longer live there,” says Necia. This distance also allows her to consume the news cycle a little more mindfully.

Meeta also shares these sentiments, who feels removed from the violence happening in America. “I feel like it’s very far away from me. I’m very distant from it”.

However, these incidents do take their toll. “I think each time it happens, as an American citizen, I feel a little more ashamed of the mentality and of the Americans who think that guns are not the problem,” she says.