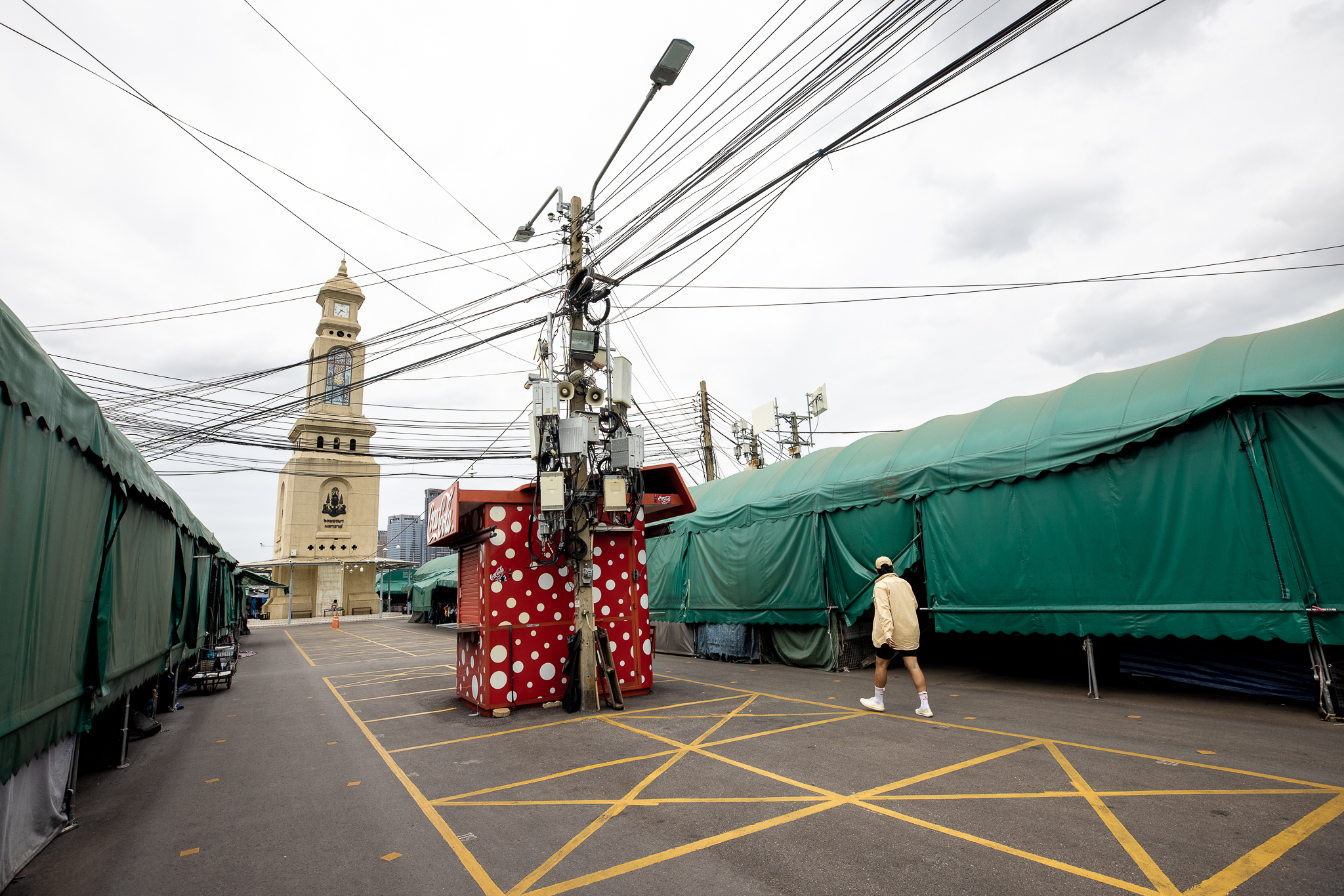 THAILAND — An eerie quiet descends on Chatuchak today. At this point, I’m more afraid of running into a zombie than a pickpocket. Pre-pandemic, on a fine Saturday afternoon like this, one would find themselves amongst shoppers, both domestic and local, armed with cash to spend. But that’s not the case anymore—now, it’s reminiscent of an abandoned town. I check my phone to ascertain that I’m not here on the wrong day of the week. It’s Saturday, all right.

As I traipse every alley of the 27 zones, I find that the labyrinthine market has never been easier to navigate. Gone were the days I had to squeeze through a crowd of marketgoers. Unfortunately, there’s not much to see either. At this point, I have the entire property mapped out. I’m sure I won’t ever get lost again—even if everyone comes back to browse, bargain, and bring some measure of conviviality to this internationally known landmark of Bangkok.

A few business owners at the once-bustling Chatuchak weekend market are doing everything to stay afloat, desperately waiting for the day shoppers, especially tourists, return to this renowned open-air shopping destination.

Due to the impact of COVID-19 on Thailand’s tourism sector and the mismanagement of the Thai government, vendors at Chatuchak have either permanently shuttered or suspended store-front operations. For many, staying open costs more than it generates right now.

My first stop this afternoon is a stall selling hemp-sack bags near the clock tower. Toom, the owner, tells me that she can afford to stay open week after week because she lives nearby—commuting is not an issue. She’s seen how everything has changed.

“Thanks to the news of more people being vaccinated, it’s already busier than two weeks ago.”

“Did you say busier?” I ask, then both of us laugh awkwardly. As far as my eyes can see, the only thing present is the scorching sun.

“This is busier. I would know. I’ve been here every weekend.”

I haven’t seen more than 20 potential buyers since I came in. In fact, I’ve never seen a market with more sellers than buyers—not until today, anyway.

“They’re our hope, but not because I expect them to buy anything. I’m just hoping to see more of them. I only think about how many people I will see today, not who will buy from me,” Toom shares when I ask what she thinks about looking at all the passersby.

Toom explains that there have been moments where things “seemed like they were going back to normal.” They don’t usually last long, though. As soon as the situation improves, we hear about a new cluster, and Chatuchak goes back to being a ghost town.

“Some vendors were just getting back on their feet [when the news hit] like the food guy across from me. He tried. When you see this tough guy cry, it’s just…” Toom struggles to finish her sentence. After a moment of silence, she adds that food vendors have their own set of challenges—sunk cost, she calls it. Fresh food will eventually rot. No customers mean no food sold, leading to no income.

Still, they have to pay rent and salaries for their employees.

A stone’s throw away from where Toom peddles her wares is a shop selling colourful garments. Here, Luh-aw sells bright, frilly, and light and breathable garments that, pre-COVID, capture the fancy of tourists who patronise these parts of the market.

Luh-aw remains open because she is afraid of losing her customers, choosing to stay in case they come by. She also doesn’t want her stock to go to waste, though at this point, it’s all about survival. “I make enough to feed my kids,” she notes.

“I can’t get a new loan. If I visited the bank today, they would say no. They don’t think I can pay it back,” Luh-aw elaborates. Soon she will also have to pay her children’s tuition; a situation made more onerous due to added accommodation expenses.

“We bounced back when the ‘We Win’ campaign was first launched. Everyone was like: ‘Yay!’” Luh-aw exclaims, her hands going wild.

“That lasted all of two weeks, and then it was back to this.”

Today I also run into Rune, who has just gotten back from doing her round of garbage collection. Unlike the vendors, Rune’s job as a cleaning lady is arguably more manageable now that there are almost fewer sellers and even lesser buyers.

“How much garbage do you pick up after one round?” I ask

“One full bag,” she responds, then gestures how big an area she has to cover—about 1/6 of the whole market.

“Oh! I would use one of those big boxy carts, like the ones at hospitals. It would be full by the time I got to the clock tower.” She points at the tower in question, which is no more than 50 meters away.

Rune explains that she’s not “collecting” garbage. These days, she plays a garbage “scavenger hunt”. Trash used to be everywhere, but now she has to put effort into finding it. Nonetheless, she misses the days of garbage collection because it was a sign of job security. Now she’s not so sure.

One customer for the day

Chatuchak vendors come from all over Thailand, not just Bangkok. The market looks like a doomsday movie set today because countless business owners have decided not to make the trip. After all, it would cost them more money to travel. An artisan from Chiang Rai doesn’t want to drive more than 10 hours to Bangkok when sales are not guaranteed.

Even noodle shop owners, Pook and A. from Ayutthaya, a mere one hour away that I’m about to talk to are unsure about raking in a profit. Still, when dining-in arrangements were back on the table, they decided to re-open their noodle shop. Rent, after all, has already been paid, and they hope to make enough to cover it.

“You can go broke, or you can break even. But we would definitely go broke if we didn’t re-open,” A. tells me, his tone ominous as if to reflect the darkening sky.

After seeing Chatuchak today, if I were in their shoes, I would worry about my future too.

Typically speaking, Chatuchak should be at its maximum capacity on a Saturday night. Not tonight, though. If it weren’t for us, the market would be deserted.

“It wasn’t always like this. Typically, after 4 pm, it would be packed. People would be walking shoulder to shoulder and moving in one direction. It used to be nearly impossible to cross from here to the other side,” A. recounts before cleaning up after the customer, who was probably the last one of the day. They’re closing at 7 pm. tonight, and, though curious, I dare not ask how many bowls they have sold today.

As they’re not from Bangkok, and daily commutes seem foolish, Pook and A. have rented another unit in the market for their stay. After cleaning up, they lead me to their humble sleeping quarters.

A village no more

“This used to be like a village, a community. We would eat and sleep there. We were neighbours,” A. explains while showing me the way. He points to the dark area to his right, indicating where all bustling marker activities used to take place. Now it’s empty and lifeless.

“After the market closed, we would pack up. Each food vendor would bring our specialities: noodle soup, Hainanese chicken rice, Thai dishes. We’d sit together and talk, shower, go to bed, and start everything over the next day. There’s none of that now,” Pook chimes in.

It doesn’t take long to find A. and Pook’s bedroom, which is located in another market stall. They turn on the ceiling lights, the illumination casting a solitary glow in Zone 20-something. I’m standing outside, facing the unit and looking both ways. I can only see paths that stretch into the dark.

After one full day of exploring Chatuchak, it would not be a far stretch to call it a ghost town. Closed up stalls. Dark alleyways. Sparse streetlights that are barely enough to see where I’m going. The inhabitants of this almost ghost town have either left temporarily or permanently. Still, A. and Pook hope they will see neighbours moving in again one day.

“It’s strange. Saturday nights used to be fun-filled,” Pook intones. “Every seller would join in on the conversations and the laughter. We were happy. Now? There’s nothing but shadows.”