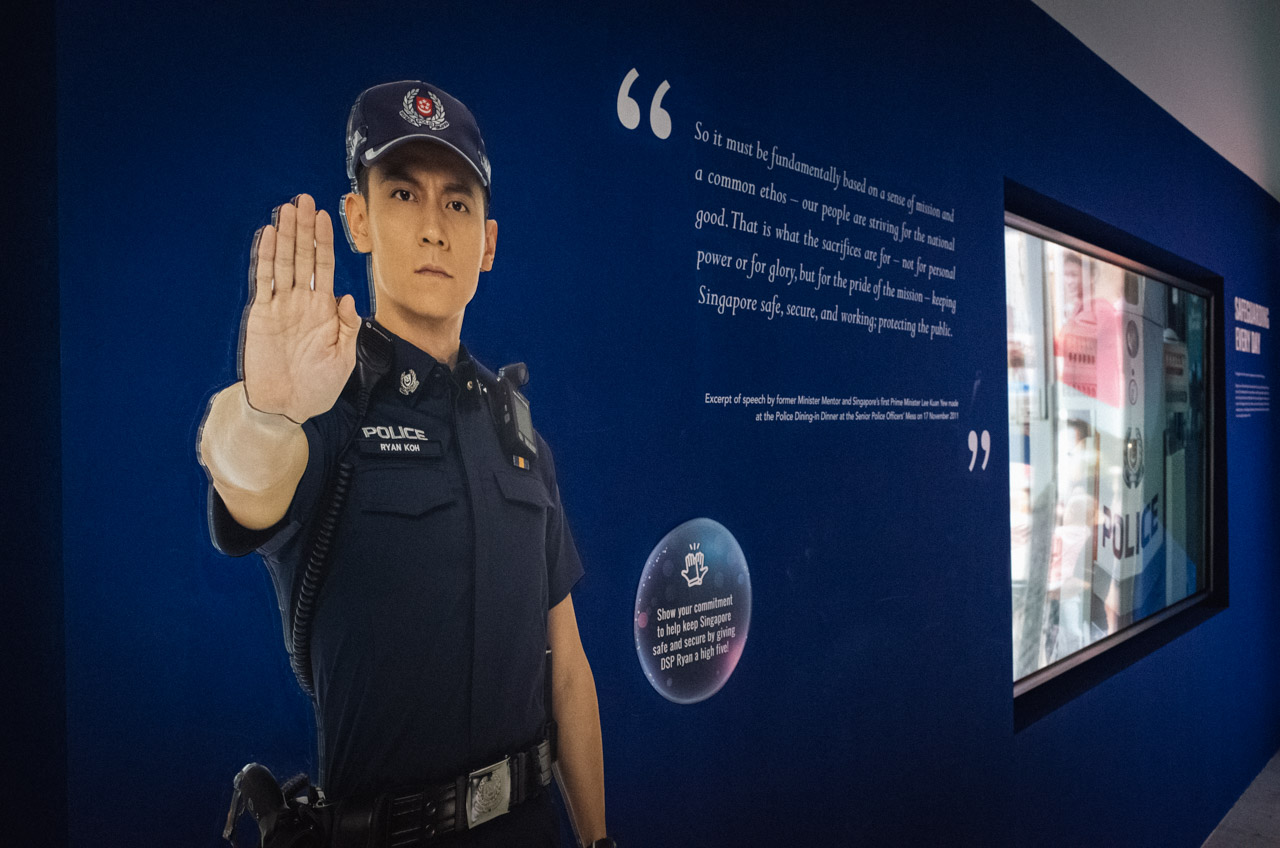 Let’s be clear: I have nothing but respect for the integrity of the Singapore Police Force. In my dealings with the police, they’ve been perfectly courteous and professional. Compared to China or the USA, we are #trulyblessed.

Singapore cannot do without them.

So it’s a shame that the National Museum’s Police Bicentennial (SPF200) Exhibition is such a bore. The brochure promises it will take us on a ‘200-year policing journey’. The reality is less substantial than a fart in gale-force winds. What little history it examines is mostly whitewashed. What remains is a great injustice to the history of justice.

Take, for example, Syed Yassin, a merchant who stabbed Farquhar and killed an Indian constable. He is featured in the exhibition as the person responsible for Singapore’s first ‘police casualty’.

SPF200 notes that he had failed to pay his debt and ‘ran amok’. What it neglects to mention was how Raffles also ‘ran amok’ when he learned of what transpired. Raffles clapped chains on his corpse, strung it up and displayed it in a cage for all to see. For weeks, the poor man served as a blood-and-flesh version of those haiku sign boards which proclaim:

Historians have analysed this event in great detail, because it reveals much about the Europeans’ so-called ‘civilising’ mission. The SPF exhibition omits his mutilation entirely, probably because it raises too many uncomfortable questions about the violence and spectacle of early Singaporean justice.

Sadly, this is not the only crime of omission committed by the SPF. Most of the funny and controversial episodes on our policing history have gone missing. The exhibit has more holes than a shipment of Swiss cheese.

Special Branch, the department responsible for fighting wannabe Trotskyists, gets a quick mention before disappearing into thin air. Despite the many interesting and colourful accounts written about its operations by ex-Special-Branch constables and academics, the only thing which made it into the exhibit was a few whispered mentions of ‘communist insurgency’ and ‘labour unrest’.

Naturally, there is no reference to Operation Coldstore or Operation Spectrum, not even the correct, government-approved version. The police’s part in cutting of long hair  was also tactfully forgotten, probably because it’s too embarrassing to remember when S’pore considered long hair subversive... Race was also ignored, even though the ordinance banning Chinese policemen tells us a great deal about how the colonial authorities approached crime and punishment–through the lens of race.

You Can Help This Exhibit By Expanding It

However, the exhibit is not just disappointing for half-hearted SJWs like myself. Regular date-night museum goers might feel a little let down by how anti-climatic some of the stories are.

Did you know, for example, that LKY was supported by secret societies in the 1957 Tanjong Pagar by-election? It’s not a story the Jedi would tell you, but it’s true. They helped him by canvassing for votes and intimidating rival candidates.

I’m telling you this because SPF200 certainly won’t. The phrase ‘secret society’ is mentioned half a hundred times, but I emerged with no clearer picture of how they operated, or the threat they posed to public order. They rose. They carried ‘membership’ cards. They fell—because of ‘tougher legislation’.

Why did they wield so much power? How did they make money? Drugs? Racketeering? Human trafficking? No idea. In its eagerness to turn SPF into Batman, the curators forgot to create a compelling Joker. For all we know, the 66666 and Gi Tiong Ho funded themselves by baking cookies and selling face masks on Carousell.

The exhibit also mentions a ‘Phantom Squad’ who brawled with gangsters on the streets and in their strongholds, armed with pistols. They wore coloured armbands to identify each other covertly.

How exciting, I thought, before reading on and reaching an abrupt end just 2 sentences later. Wait, what, that’s it? Surely there must be more to this elite squadron of bad cops than just friendship bracelets? Likewise for Gurkha Force, or the WW2 segment. I wish there was more of everything than the Wikipedia stubs on display.

Sorry, Didn’t We Just Have a Bicentennial Last Year?

Long story short: Singapore was very unsafe then, but very safe now. Along the way, we got radios, Gurkhas, FBI-style shooting and Crimewatch.

This would be okay if I was attending a Singapore Police Force Career Fair, but I feel that a bicentennial history exhibition hosted by the National Museum should be held to a higher standard.

Ultimately, my disappointment boils down to this: SPF200 does a disservice to Singapore’s history, by painting everything in shades of black and white, order and chaos, violence and safety—by reducing the fairly complicated issue of law and order into the usual story of upward progress. Even its title ‘Frontier Town To Safest City’ recalls the ‘Fishing Village To Thriving Metropolis’ cliche.

After all, the chaos to which SPF presents itself as antidote isn’t just ‘vice’ or ‘riots’. There are real people involved, with dissenting political ideologies and legitimate grievances. We don’t have to celebrate these so-called ‘criminals’, but surely it does us no harm to learn of the 1915 Sepoy Mutiny’s links to a nascent Indian nationalism, or how the Hock Lee Bus Riots were–at least in part–motivated by poor economic prospects.

SPF200 strips away the political consciousness at the heart of these events and flattens them into meaningless episodes of chaos and disorder. In doing so, it erases history.

I get it. It’s the SPF’s exhibit. It’s their birthday. There is limited space and budget. However, birthdays are not just celebratory occasions, but also a time to take stock and reflect, no? As it stands, the show is an exercise in strategic amnesia.

Dear mata, please don’t arrest me. For everything else, there’s community@ricemedia.co