Travelling to Little India Means Seeing It With New Eyes 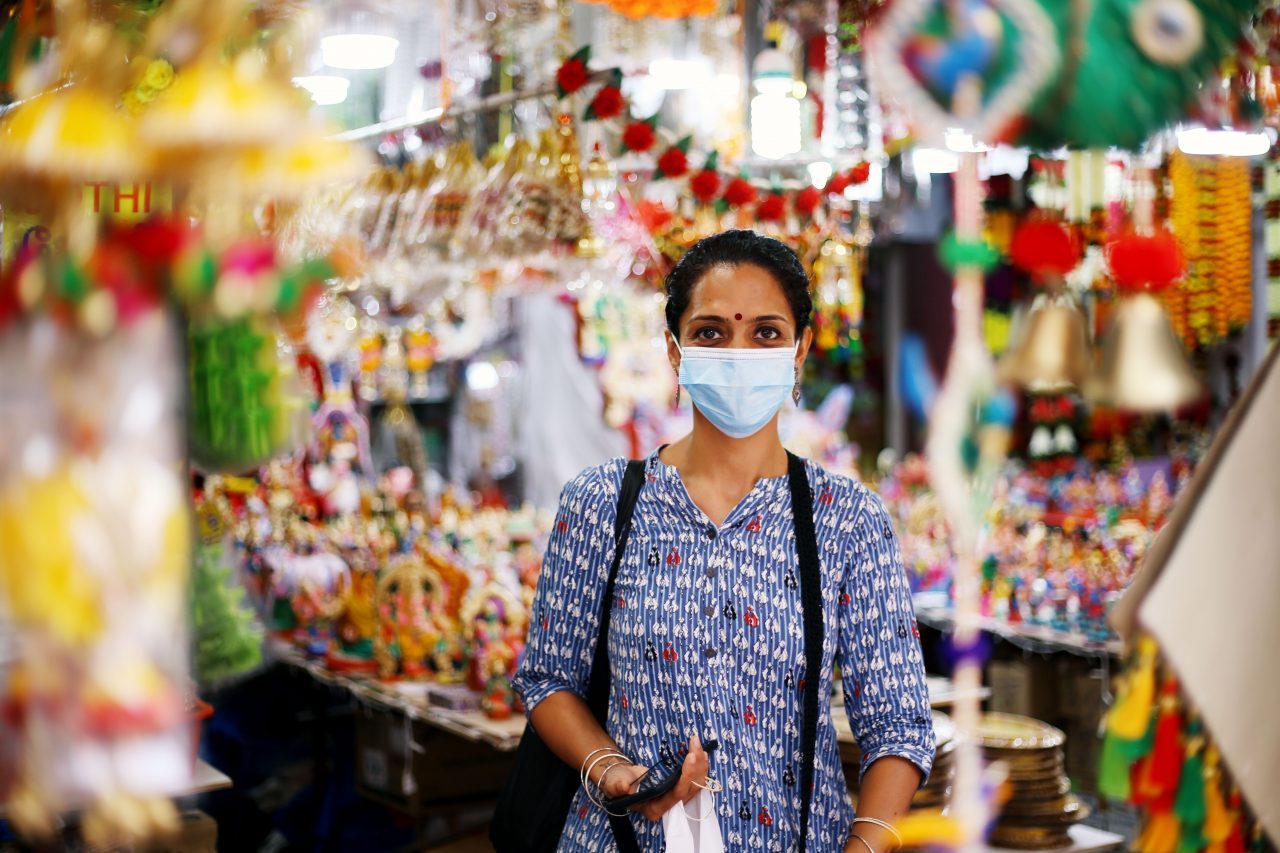 All photography by Marisse Caine.

The colours of Deepavali are everywhere, but the mood in Little India feels far from festive.

The tourists have disappeared. So have the elderly Indian uncles, who used to linger at cafes and restaurants, reading the paper and drinking chai. The shop owners, usually a friendly and welcoming bunch, look at our camera with apprehension.

“It’s sad,” says Vinita. “Before this pandemic, Little India was a community that felt authentic to me. What you see is what you get here. It doesn’t feel manufactured.”

For Vinita Ramani, 42, that sense of authenticity in Singapore was hard to come by.

Her family migrated to Singapore in 1991, when Vinita was 13. By then she’d lived in Hong Kong, the UK and Middle East and had experienced life as a minority in radically different environments. Her family took up a small flat in the verdant pastures of Yishun, then the last stop on the MRT line. Immediately upon arrival, she enrolled in the now-defunct Thomson Secondary School.

The transition from life as an expatriate in Hong Kong to that of a Yishun girl was jarring.

Whereas in Hong Kong, Vinita was just ‘Indian,’ moving to Singapore meant dealing with not fitting into the Singaporean expectation of what being ‘Indian’ entailed, from her Tamil ethnicity to her too-light skin colour (‘are you Eurasian?’). In her late teens, she joined a rock band as a bass guitarist and developed an unrequited crush on a ‘James Dean ah beng,’ who lived on the ground floor with his family.

Her life has been one of change. And in that period, Little India has changed at a much slower pace. For decades, the neighbourhood was a tribute to another time.

The Little India MRT station on the North-East Line was completed in 2003, and a further link was made to the Downtown Line in 2015. Tekka Place now greets visitors at the beginning of Serangoon Road. But the neighbourhood today has largely retained its original character since the 90s.

That is until the pandemic struck.

“I don’t think we’ve come to terms yet with what we’ve lost,“ says Vinita. “Or how many things we’ve taken for granted.”

Little India is in the daily rituals of its people

To get the full experience of Little India, you’d have to go on a Sunday morning, when locals run their errands and go through their weekly rituals. The point of visiting the neighbourhood is to feel the energy of the crowd, to take in the people, sights, and smells.

That’s the feeling I was hoping to discover in Singapore when I approached Vinita, who’s also my former Editor at RICE, with the idea of a walking tour around Little India. Having moved to Singapore from Taiwan just before the circuit breaker, I never really got to know Vinita and the neighbourhood she’s raved so much about.

“So you want to follow me around for a morning while I run errands?” she asks.

“Yup,” I say. “Just do what you’d normally do. I want to see the neighbourhood through your eyes.”

To me, that’s the most interesting part of travel. It’s not about grand destinations or exotic retreats, but about getting to know strangers better through the ordinary and mundane rituals of their lives.

Which is how we found ourselves standing in front of Mitraa Flower Shop on Buffalo Road, as Vinita selected wreathes of jasmine and bermuda grass garlands to hang on the statue of Lord Ganesha sitting on her altar at home—an elephant-like deity known for being the patron of the arts, as well as the remover of obstacles.

As a Tamil Singaporean, is she religious?

“Not devoutly so,” says Vinita. “It’s more a matter of keeping the traditions alive. I enjoy many aspects of the rituals, and increasingly, the things that preserve the Tamil sense of identity.”

Our next stop is a grocery run for bananas. Instead of the typical items you’d see at an NTUC, the Indian grocery store stocks produce that I’ve never seen before, including a variety of gourd called tinda and an Indian gooseberry that’s been used in Ayurvedic medicine for thousands of years.

Vinita walks me through the store’s selection of spices, like the Venus brand Idli and Dosa Podi, a condiment made of lentils, seeds, and spices that’s typically served with idli and ghee butter.

I also recognize the Mother’s Recipe jar of pickled vegetables (achar), which I was first introduced to by a Nepali-Indian family on the hill station of Darjeeling. A tangy and flavourful pickle, Indian families have it with everything, and it rivals the Chinese Lao Gan Ma for its ubiquity in the family fridge.

The third and final stop is Jothi Pushpa Kadai for new bangles for Vinita’s daughter Sahana, now three and a half. Vinita wants to make this year’s Deepavali a memorable one for Sahana. With any luck, she’ll get her to sit still for long enough to apply henna on her palms. Again, it’s a ritual she fondly remembers from her childhood when they went to Chennai during the holidays to spend time with relatives. Her grandmother would pluck the leaves from the henna tree (Lawsonia inermis) in their backyard, grind it with a bit of water into a paste, and apply it for all her granddaughters during the festive season.

Balancing her Tamil heritage with her Singaporean identity has been a constant struggle. Having only started her Singapore education at Secondary 1, Vinita can speak Tamil, but can’t read or write the language. The job of teaching her daughter has fallen upon the grandparents and her husband.

They’ve run out of Appam

It’s barely 11 AM when we finish shopping, and they’ve already run out of appam at New Madras Woodlands Restaurant.

The owner is apologetic, and explains that since Phase 2 reopening, they’ve had fewer customers in the mornings, so they’ve been making smaller batches of the fermented rice batter for the Sri Lankan pancake dish.

Disappointed, we settle for idli and thosai sets along with cups of Madras tea. A side order of delicious vadais cheers us up greatly, arriving at our table still piping hot from the fryer.

At the adjacent table sits a group of four—acquaintances of Vinita’s who work in the creative and performing arts. When we enter the restaurant, Vinita says a quick hello before we sit down for our meal.

Due to restrictions against intermingling between groups, a conversation that would’ve happened under normal circumstances didn’t. Both groups keep mostly to themselves.

Even the restaurant’s open kitchen is off-limits to our camera, although we can clearly see that the staff are equipped with masks and are taking all the necessary precautions. But with businesses struggling as it is, photography is just too great a risk.

After our meal, we get the same polite rejection at Rupini’s, an institution in Little India, where Vinita is scheduled to get her eyebrows threaded. So our walking tour of Little India ends with no resolution and we have to say goodbye.

Walking back toward the MRT station, I feel an unexplainable sense of loss. When I read the Whatsapp message from Vinita on the train, I know that she feels it too.

Will Little India ever return to normal?

Through the changes in Vinita’s life in Singapore, Little India has been the one constant. As a former bassist in a rock band, she remembers heading to Anandha Bhavan, an Indian vegetarian restaurant on Selegie Road, after every jam session at Paradiz Centre. Once situated in Ellison Building, that branch of Anandha Bhavan has now disappeared, and the historic Ellison Building itself will be partially razed, and rebuilt, to make way for construction of a highway.

And yet life carries on. Little India remains a source of freedom and comfort to both the Singaporean Indian community, and homesick migrant workers who are just passing through. You bump into family or friends and stop to have chai or filter coffee. You get to know your local vegetable market seller. The temple priests, or Imams in the mosques know your ritual routines and the cafes know how you like your thosai or prata.

Today, even as Singapore moves from Phase 2 into Phase 3, Vinita still senses an underlying tension in this community. Life may be inching back to normal, yet some things still don’t feel the same. Little India, like many other communities in Singapore, is more on edge now, existing in a grey area where any move towards normality might cause everything to shut down again.

The crowds, which had once been part of the attraction of visiting Little India, has become a source of stress and caution.

Perhaps more damagingly, this pandemic has created a physical and emotional distance between people. The longer COVID-19 forces countries and communities to close themselves off, the less we’ll be able to understand and empathize with each other.

All Singaporean communities are living in this limbo right now. We’re all waiting for something to happen. And it’s against this backdrop, with our jobs and livelihoods at stake, that we move forward as best we can, with more questions than answers.

But maybe that’s what rediscovering Singapore is all about: meeting people from different walks of life, and finding the interesting questions to ask, and not necessarily having the answers.

Domestic travel can be more than Sentosa and USS. It can be a walk through a neighbourhood with someone you barely know. It can be an antidote against prejudice and the arrogance of certainty.

Singapore doesn’t have to be boring. If we wanted to, we could recreate the feeling of newness right here, by breaking out of our familiar routines. We could discover something new about this city that was unfamiliar to us, even though after all these decades, it was right here at our doorstep.