For This 24-Year-Old, Failure is a Laughing Matter 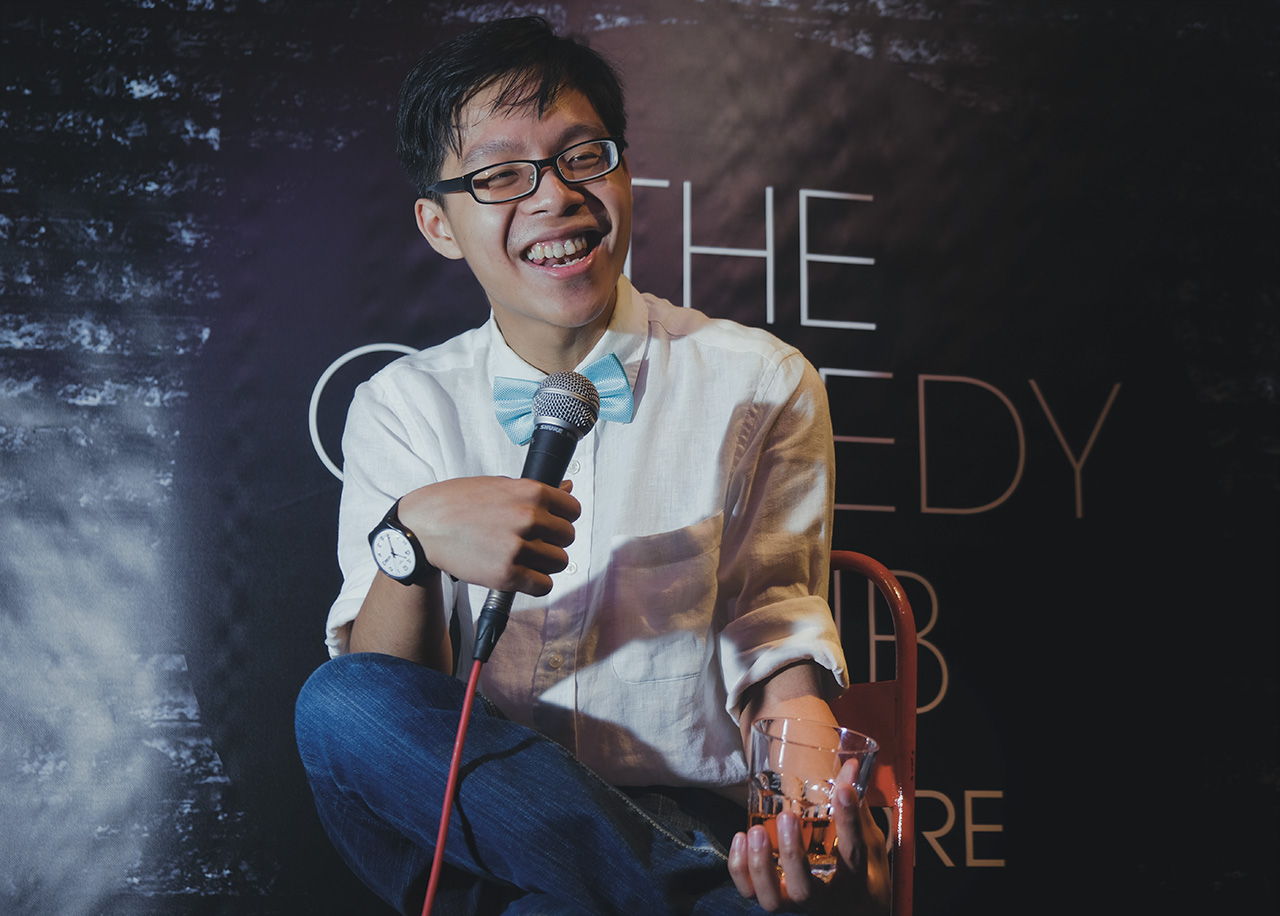 Armed with an ear-splitting grin, an air of infectious energy and a bright blue bowtie, Samuel See (Sam for short), 24, sets down his glass of The Macallan whisky and steps into the spotlight.

Tonight, he’s taking the stage as the host of The Comedy Club Asia’s weekly stand up comedy open mic night.

Within seconds, he has the audience—a little quiet and reserved at first—laughing, clapping and clinging onto his every word.

“People always have the misconception that the emcee, the host of the show, is not a comic. He is always a comic, a senior comedian normally,”  says Samuel after the show.

Samuel got his first taste of stand up comedy in 2012, when he witnessed a friend try her hand at it during an open-mic night. “I thought to myself she’s terrible, I can do way better than that.”

“I went on stage the next week thinking “I can do this, it’s easy”. Turns out I was terrible as well.”

He could’ve given up then and there, but he didn’t. Instead, he’s been on a relentless pursuit since then to be the best comedian he can.

From my seat in the corner of the room, I watch as Sam warms the crowd in preparation for the first act. “Part of my style is to do crowd work, to talk to people, say hi, ask them where they’re from and using that, make jokes on the fly,” he says.

It’s an unusual tactic—given how notoriously frosty and unresponsive Singaporeans can be—but for Sam, it’s a purposeful one.

“Singaporean audiences are very hard to entertain because we’re such a mixed crowd, we have people from all over the world,” he tells me.

“When you perform in Malaysia or the Philippines, 80 to 90 percent are locals. You come to Singapore and 50 percent of them are expats. So you have to find a nice middle ground that everyone can appreciate.”

Sam picks out a young man seated alone in the front row, confirms that he is indeed single and then proceeds to spend the next minute trying to find him a suitable date from the audience.

Although I count at least 4 different nationalities in our little space at the show, by making a member of the audience (and not some obscure event) the focal point of his jokes, Sam is able to elicit laughter from every corner of the room.

But Singapore’s stand up comedy scene wasn’t always so encouraging.

7 years ago when the scene was still in its infancy, comedians had to grapple with poor turnouts of 4 to 5 people, and a sombre audience. “They wouldn’t be open to certain concepts or jokes. They wouldn’t laugh, just stare at you.”

“It is the worst feeling,” says Sam. “Gut wrenching.”

Such rough beginnings meant that comics had little choice but to get better, faster.

And their hard work has paid off. On average, Sam books between 10 to 20 shows a month and has been invited to perform in places such as Macau, Japan, Australia and Oman to crowds of anywhere from ten to a thousand four hundred people.

It’s quite a feat, considering that Sam used to be an anxious teen who’d struggle when it came to simple tasks like ordering his own food. When we speak, I still see a little bit of that in him, in the slightly frenetic way he talks and how he jumps quickly from topic to topic.

On stage however, he’s a natural.

When I ask how he manages to calms his nerves before hitting the stage, he lifts his glass of  The Macallan to me in response. Instead of taking a sip however, he raises it to his nose. “I can’t drink too much before a show, otherwise my concentration goes out the window.”

A whisky-lover, Sam appreciates a fine oak as much as the next person, but it’s when he catches the faintest whiff of vanilla and citrus in his glass—a reminder of the cologne he used to wear in his early days as a comedian—that he knows things will be alright.

Aside from the soothing effects of The Macallan, the secret sauce of being a comic according to Sam lies in continuous practice.

Comedy is unpredictable, he tells me.

“You can have a really good joke that no one laughs at and a really bad joke that everyone finds funny. This changes every night, with every show,” says Sam.

It is for this reason that comedians are in a continuous pursuit of improvement—and eventually perfection. However, I am told that perfection doesn’t exist. “We want to do the best show we can and be the best comedian we can, but we secretly know that we will never get there.”

“No matter what happens, you will look at the one guy in the audience not laughing, and you feel like a failure.”

And so he continues to practice.

Only after years of training and experience do comics like Sam manage to make it look much easier than it is. Onlookers rarely see the hard work and preparation that goes into putting up a good—or even passable— routine. Many, only see the fame and success it brings.

Like most things in life, one can be good if only they’re willing to put in the requisite time and energy. “You just have to keep doing it. Go out and perform anywhere you can.”

Of course, the occasional failure is unavoidable.

“It is inherent in stand up comedy that you will fail,” says Sam. “You’re encouraged to fail even. But Singaporeans are so afraid of failure.”

“Singaporeans try stand up comedy for the first time, they fail and they never come back. It’s a shame because if they had just stuck on for a little bit longer, they would’ve been good.”

At present, Sam’s got big plans for the future.

Not only is he focusing his energies on grooming the future generation of comics, but he’s open to moving on to other forms of entertainment such as theatre or television. “I’ll go wherever I’m the happiest.”

The Macallan Edition No. 3 is the latest release in this innovative annual Series. Like preceding releases, Edition No.3 is an exploration into The Macallan’s approach to whisky making, exposing the detail of its creation, and offering true transparency.