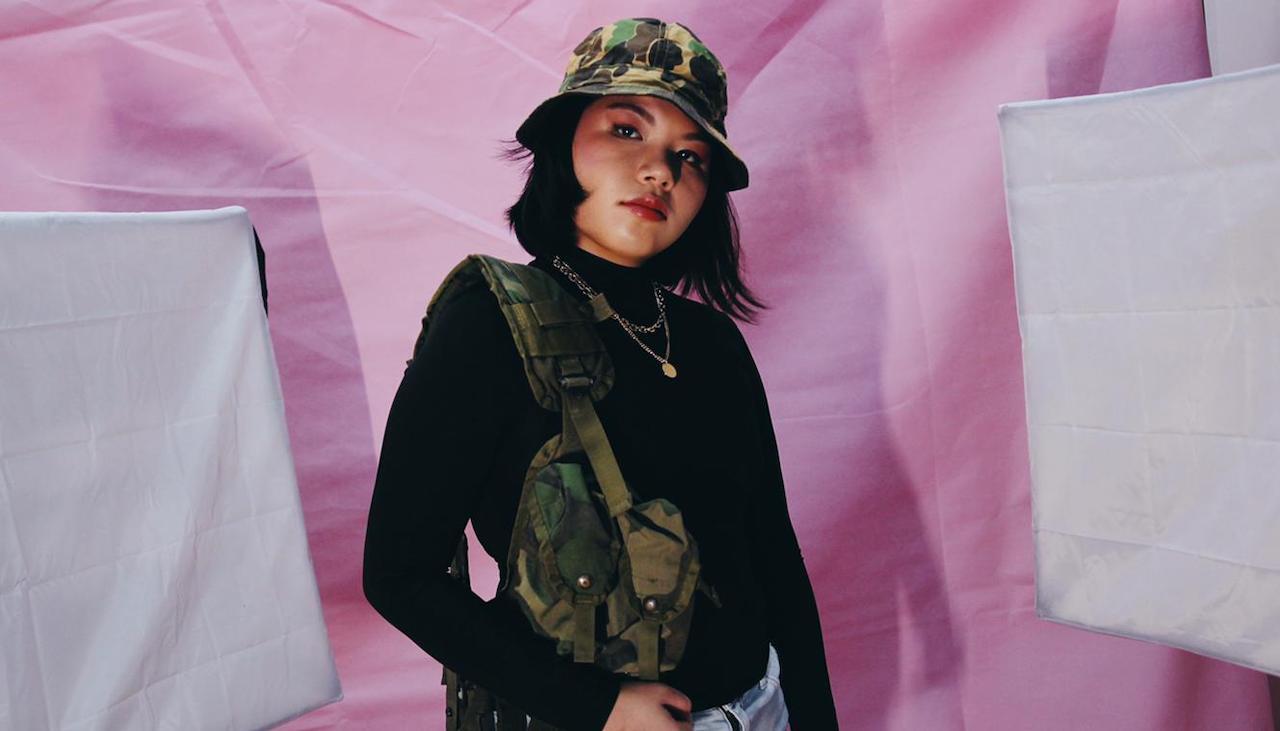 She would watch mystery films, collect toy guns, and play detective. “I liked anything battlefield related. I never liked dolls.”

But as she went from child to teenager, Elaine also developed a passion for music. Beatboxing, to be precise. She would perform and battle every weekend during her polytechnic years, and she got so serious about it that she started Beatz Inc Music, a beatboxing company, with her partner Zack. They were only 21.

But as much as she enjoyed music, she never thought about pursuing it full time. All anyone around her would say was to drop it all together: “Why are you going for competitions and performances? You should focus on your studies,” Elaine’s friends would tell her.

Even years later, her colleagues would ask her: “Why pursue music? You don’t get CPF from that.”

Sound familiar? Most young people have probably heard a variation of these statements when deciding what to do with their lives. It’s a conflicting time in life, and even more so when your passion is considered ‘alternative’ or unconventional.

But Elaine was lucky. She found a career path she liked, and it ticked every box of the “Singapore dream.” Her school was paid for by the military, her career prospects were bright, and most importantly, her parents were proud: “I never saw my dad’s face as happy as when he came to my military graduation ceremony. He was beaming with pride.”

At this point, the only hiccup in Elaine’s otherwise smooth trajectory was that she couldn’t shake off her passion for music. Her itch for beats and melodies only grew stronger, especially when military training deprived her of making music for days on end.

But what could she do? Pursuing music wouldn’t make anyone proud, nor would it give her a stable income. She thought the only option was to keep it as a pastime, and try her best to do both.

This seemed doable when she got out of training. She would finally get her Friday nights off, and she planned to use every minute free to spit beats on stage.

She would anxiously wait for the weekend, and as the clock struck 7, she would take a cab from Pasir Laba straight to town where she would perform. As soon as she got off the stage, she would have to rush back to camp and be back by 11:45.

“I wasn’t getting paid, I was just chasing that feeling of performing I missed,” Elaine said about the performances.

This dual life worked for her—at first. She was a soldier by day, and beatboxer by night.

But as her career progressed, her job got more stressful and her body started failing her. The first symptom of this was the aggravation of her Irritable bowel syndrome (IBS).

“No one believed me,” she said. “When I got stressed, I had to go to the bathroom. But that pissed them off because they saw it as ‘one man down’. They said ‘there is no such thing as IBS.”

So at around the age of 22, Elaine had to go get a colonoscopy and endoscopy to prove to her bosses that she wasn’t lying about her condition. That mistrust and hostility made her feel even worse, leading to more health issues presenting themselves.

Every morning as she was putting on her uniform, Elaine would get a headache. At first, she didn’t think much of it, until it got worse.

“When I was on the bus on my way to work, I would feel a piercing pain as soon as I was in the vicinity of camp—sometimes when I couldn’t even tell I was close by,” Elaine said. “Then as I arrived, it felt like something was choking me as I approached camp. It grew stronger and stronger as I got closer.”

She forced herself to go to work everyday, struggling to contain her emotions. Sometimes, they would get the best of her, causing her to act irrationally: “Once, I saw my company sergeant major and other colleagues walking, and I just started running away from them. They chased me, and I literally broke down and started yelling “what do you want from me.”

Again, her bosses thought she was making excuses. So she went to the military medical institute and IMH, to eventually get a letter for her anxiety.

Elaine’s psychologist gave her two options: leave the military and watch her anxiety subside, or stay and attempt treatment. At this point, the answer to Elaine was clear. She wanted to leave.

“It hit me that I had a choice, and my body was telling me that all along. I knew my heart was in music,” Elaine said.

So she built up the courage to leave, or ask to leave, the military—her contract was at odds with her decision.

“The contract says that your two months notice starts only once they approve your leave,” Elaine explained, her voice still frustrated to this day.

They told her she couldn’t leave unless she paid $90,000— the amount they supposedly spent on her polytechnic education and training. But Elaine didn’t have the money, so all they could offer was to remove her from the operations she was assigned to, and allow her to work in a separate office alone.

But moving from operations to an office environment didn’t resolve the issue.

That’s when Elaine hit rock bottom. She felt stuck, helpless, and couldn’t see a light at the end of the tunnel. She couldn’t leave the military because she didn’t have the money, nor could she go back to the operations, where she was clearly unhappy.

“I was in pain and struggling,” Elaine said, adding,  “When they said I couldn’t leave, my depression started kicking in and … I tried to take my life.”

Everyday, Elaine would go home and cry in her study room before greeting her parents. She was slowly breaking, but she didn’t want to burden them. After all, they didn’t understand the stress she was under.

But one day, when she came home after a day of work as usual, her body and mind gave up. She couldn’t take it anymore.

“I was numb, and I remember my mom fighting with my sisters, and there was just so much noise. I had sleeping pills in the fridge, so I just went and took them.”

Her partner, Zack, was in the living room when Elaine took the pills. When he realised what she had done, he ran to her and used his fingers to get the pills out.

“My body was moving, but I wasn’t there,” Elaine said about that moment. She tells me the story as if it was a scene from a movie—she was moving on autopilot.

This episode passed, and she made it through. But she was still living in misery, and all IMH could do was provide her with MCs to keep her out of work.

Elaine momentarily stops while telling her story. She smiles, her eyes wander and she says, “The body is amazing, it tells you what you need to know.”

She returns to her story, mentioning the glimpse of light that finally showed up: Elaine was eventually discharged on medical grounds, meaning the amount she had to pay to leave was reduced to $10,000. But she still didn’t have the money.

So she turned to her father, who couldn’t afford to pay for her polytechnic education, which is what led her to take the military scholarship scheme in the first place.

Everything and everyone was against Elaine. But with no one else to turn to, she took the money, paid the military what she owed and took off. The worst was over.

Her father came around, and she joined her partner Zack in running Beatz Inc Music.

Together, Zack and Elaine built up their company to provide the Singapore education system an offering they never had before: a structured guideline on how to teach beatboxing.

“There was nothing set in stone about what kids were going to get out of a beatboxing lesson,” Elaine said. “There was no standardized education around it.” It wasn’t taken seriously, and Elaine has set out to change that.

For years beatboxing wasn’t given a positive rep in schools, resulting in some saying they would only pay $5 for a beatboxing class. Others would outright say it wasn an inappropriate skill to teach kids, referring to the hip-hop culture they deemed as distasteful.

“It’s an art form like any other, and it’s amazing because we teach you how to use the human body as an instrument,” Elaine said.

Elaine is also building her career as an artist herself. She represented Singapore at the World Beatboxing Championship in 2018, and even co-founded Nusantara Records, a music label, with Singaporean rapper Masia One.

But looking back, Elaine says all of this wouldn’t have been possible without her time in the military.

“The army made me who I am. It taught me discipline and how to express myself. I am thankful for that.” And as an ode to her past, Elaine’s artist name is General Ling.

She also released a song by the same name with artists including Masia One.

“The message of the song is believing in yourself, which is the moral I want to share. Trust yourself to go out and get what you deserve. Sometimes people need a voice to say ‘hey, you are doing the right thing. You’re not crazy. It will happen.’ If you’re reading this, I am that voice.”

Last year, it really hit Elaine for the first time that she was finally living her dreams.

“It was my 26th birthday and I was on tour with Masia One in Australia—it was my first time ever touring. We were celebrating, and I took a moment to look around. I finally felt like I’ve done it. I am where I am, and I’m happy.”

What’s the most dramatic career switch you’ve ever made? Tell us at community@ricemedia.co.
Share to
Related Articles