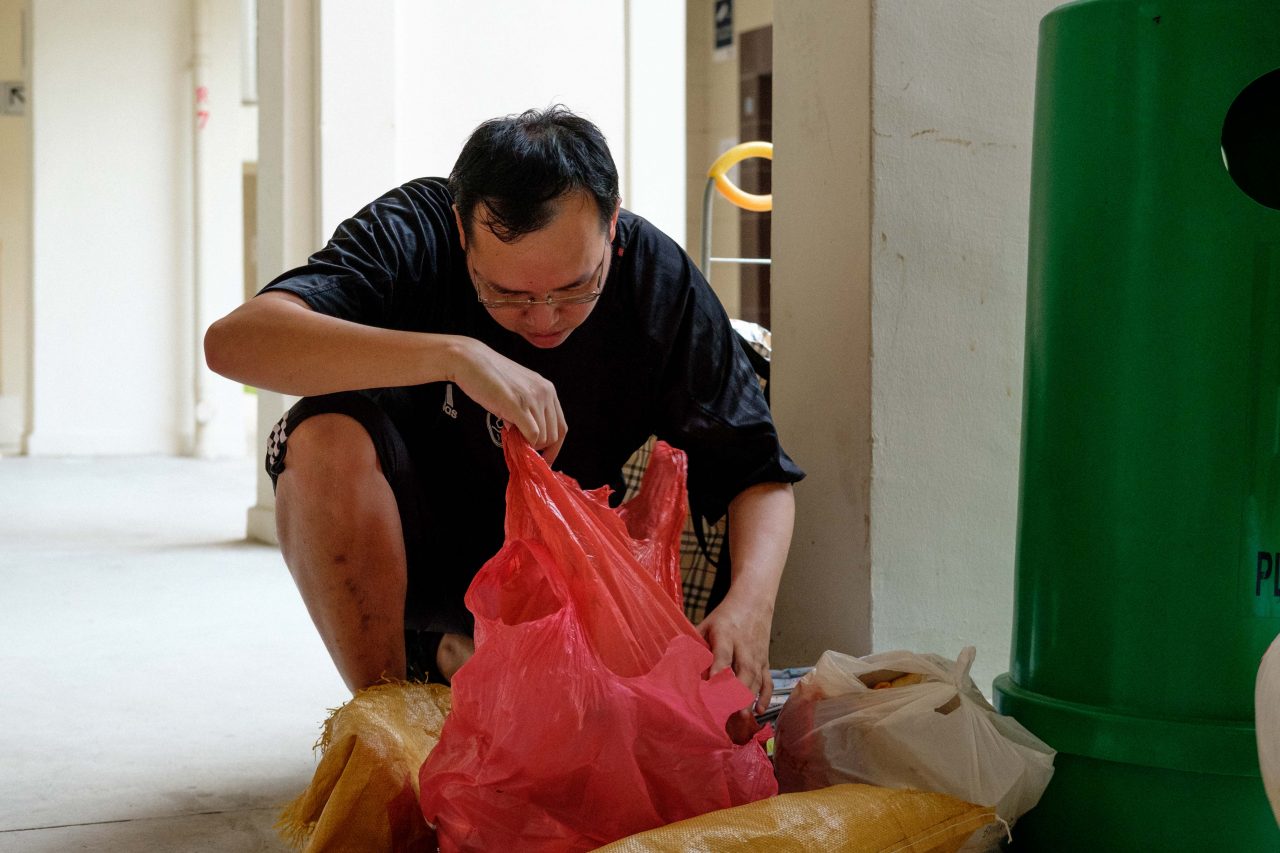 On a typical Sunday afternoon, he stops at a green rubbish bin before stooping down to carefully untie a pink plastic bag lying next to it. Pulling out a container filled with yellow noodles, he peels off its lid for a sniff.

“Hmm, seems okay,” he mumbles to himself.

Later, he encounters a pizza box with just a slice remaining. This time, there is no hesitation. He goes in for a bite.

This is 38-year-old Daniel Tay, a mild-mannered financial planner who dumpster dives for fun.

For him, “normal” doesn’t quite apply.

“Dumpster diving is a subset of a certain kind of lifestyle that advocates better sharing of resources,” he explains, having first been introduced to the practice by a fellow hobbyist at an event about balancing one’s passions and pay cheque.

“The first few times I did it, I was totally inefficient. I would end up walking to the same block three times because I didn’t know the area,” he says.

As his expertise grew, so did the quantity and quality of his finds. It was out of sheer convenience that he resolved to dumpster dive in the vicinity of his HDB flat.

Now, he does it on the regular, about two to three days a week (Saturday, Sunday, and either Wednesday or Thursday), and usually in the evenings at 8pm.

Armed with a large shopping bag, a plastic trolley, a headlamp, and a pair of scissors, he follows a carefully planned route, spending about an hour collecting about 30kg worth of items. This is followed by another hour cleaning them at home.

“Initially, I didn’t really want to get my hands dirty. When I first started out, I would wash my hands all the way with Dettol soap and disinfect everything with alcohol wipes,” Daniel confesses, laughing.

These days, the intrepid picker goes in without gloves, and washes off without soap. He exercises caution so he doesn’t cut himself or get pink eyes. As for the stench, he says, “On a scale of 1 to 10, with 10 being very fragrant, it’s about a 4. It leans more towards unpleasant, but it’s not revolting.”

Despite being free from germaphobic tendencies, he isn’t immune to all fear.

During a picking session, I watch as he lets out a small shriek, jerking his hand back when he encounters something moving amidst cardboard boards that he’s sifting through.

“I don’t like insects,” shuddering as he tells me. “When I see ants, I don’t even want to look at them. I’ll skip the dumpster.”

Rewind a few weeks, and I am standing outside his door, waiting as he prepares for an early Sunday dumpster diving session in the aftermath of a heavy downpour.

Weaving in and out of the HDB blocks, Daniel knows his neighbourhood like the back of his hand. I, on the other hand, trail along blindly, at times forgetting to stop at a rubbish bin because my first instinct is to stay away from them.

While he does the digging, I carry the goods in a trolley he’s fashioned out of a pull cart and what looks like a laundry basket. Inside each dumpster, which he likens to a treasure chest, he unties plastic bags, rifles through their contents, and pokes through each item with unusual ease. He never rushes through the process.

Within two hours, we find a functioning deep fryer and rice cooker, a fishing rod, a couple of unopened packets of Korean treats, and a handful of hats and bags, among other things.

Shoes and clothes from Uniqlo, Zara, and G2000 are apparently common, and it’s normal to stumble on Coach and Burberry bags, working appliances and electronics, as well as furniture and TV sets. As for some granola bars he found during an earlier session, “I’ve still been eating them.”

“My best find was a telescope,” he says, sharing about a time he went dumpster diving with some of the more casual hobbyists from the 20-strong community in Singapore.

At the end of what had been a fruitless day, “There was a long blue box on the floor, and on top of the bench, there was a cardboard box with some funny, circular thing inside.”

As it turns out, they were parts of a fully-functioning $400 astronomy telescope.

Despite already having what he wants and needs most of the time, Daniel continues to comb through the bins every week, sometimes collecting more than he can carry.

He does this for two reasons. Firstly, someone else might want these things. Secondly, it’s fun.

“It’s a really wonderful hobby to have because you never know what you’re going to find!”

Then, sighing, he turns solemn for a moment.

In fact, some of them, still with their price tags on, are unused, unopened, and untainted.

I ask if the dumpsters along terraces and bungalows carry more valuable goods, but he doubts it: “The bigger the house, the less trash there is because there’s storage.”

There are, however, areas with better hauls, he says, listing places like Little India (with its abundance of fresh produce), Toa Payoh, Whampoa, Marine Parade, and Boon Keng – places that, he speculates, tend to carry more “interesting” trash because they’re near commercial shophouses.

“It’s not about that. It’s about changing your mindset. Scarcity creates greed, and greed creates an unequal distribution of resources, which is a problem. It’s about moving from a scarcity mindset to an abundant mindset.”

To Daniel, dumpster diving isn’t just fun. It’s common sense. Not only do you get what you need and want for free, you also spare those things from the incinerator or landfill.

This hobby-turned-lifestyle has helped cut his expenses from $2,000 to $1,148 a month, the bulk of which comprises essential bills like utilities, transport, and food for his cat. Most of these bills are split between him and his wife, and he only pays for what he needs.

At the same time, he earns about $200 a month selling 10% of his finds on Carousell. Because you can barely tell the items have come from the trash, Daniel never reveals their origins. Buyers themselves never ask either—a testament to the fact that much of what we throw away is in fact still perfectly good.

Most of the items are simply given away to those who need, but can’t afford them, such as friends, low-income migrant workers, and the existing community of dumpster divers who gather occasionally at a member’s house to sift through mountains of garbage-rescued items.

“You realise that you become less picky and that there’s very little that you actually need,” he observes. “Being aware that you need very little to live gives you a lot of freedom.”

To the average onlooker, rummaging through “filth” seems more like an act of desperation, reserved for the destitute—more controversial than commonsensical. Yet he’s discovered that Singaporeans really aren’t that nosy at all. Judgment, if any, is often passed in silence.

“When they see you going through the trash, they will actually try not to see it. When I’m wearing an office attire and I wave [to my neighbours], they wave back. When I wear my dumpster diving attire, they don’t wave back. They don’t recognise it’s the same person,” he laughs. “It’s fascinating, right?”

And what about his family and friends? What do they think of his unorthodox hobby?

“My parents felt that, ‘Eh, I send you to university to get a degree, and now you go and pick up trash. Why do you do this?’ and they feel very hurt. They placed certain expectations on me that I didn’t reach, but at the same time, I also recognise that I’m not responsible for their feelings.”

“I’ve always been a strange person, even as a kid. I think my parents have kind of gotten used to the fact that I do strange things. The best way to get a person to be not disapproving of what you do is to give them free things,” says Daniel, who’s picked up a Prada handbag (an unblemished Saffiano bowler bag with a hula girl print, to be exact) for his mom who reacted with an immediate, “I don’t want. It’s so big and heavy!”

Daniel offers three purposes to dumpster diving: saving money, saving other people, and saving the Earth. But there should be a fourth one, I suggest, “Saving yourself.”

“The first few times I dumpster dived, I was going through a really difficult time at home,” he shares.

“There was a lot of hurt going on in our relationship. 2016 was the worst. It was when I just gave up. Things had gotten so bad that I didn’t even want to go home.”

At that point, it had been three years since his marriage had begun to sour. On top of this, Daniel was also battling depression, an ailment he’s had since 2009, and was stuck in a scarcity mindset that plagued him with “a sense of not having enough”.

Stumbling upon this new, unorthodox lifestyle saved him. In fact, it was the reason he chose to take a break from his relationship and try living as housemates instead for a month.

“I knew that if we didn’t live as singles, I would never be able to explore [dumpster diving]. And the timing was good, in the sense that I had reached the end of my rope. It was just a matter of time when we’d start living as singles, so that seemed like a good opportunity to kill two birds with one stone,” he says, matter-of-factly.

Much of his current exuberance and tranquility comes from his embrace of dumpster diving, a hobby which has made him a more easygoing person.

“It’s taught me to drop my expectations,” he says. “When we dumpster dive, we don’t expect to find a computer. We just go out without expectations.”

His new hobby has also introduced him to a new community. He shares, “That social support was very helpful for my emotional life.”

“Dumpster diving is also exercise, which is one of the preventive measures against depression,” he says as we walk with bags of salvageable trash, arms aching a little and sweat forming on our foreheads.

When I ask him how his life might look like if he hadn’t gotten into dumpster diving, he falls silent for a minute.

Finally, he offers: “I cannot imagine what my life would be like. I would be very stressed, upset, and angry. I’d probably be a very unhappy person.”

Daniel is still currently living out the singles arrangement in his marriage, with both him and his spouse living their lives mostly independent of each other. But otherwise he is happy, he proclaims, very happy.

Having found purpose and joy in the least likely of places, the otherwise shy and introverted man is unapologetic about his choices.

As he puts it, “I live this lifestyle because I’ve seen the benefits of it. You benefit in every way—physically, mentally, emotionally, socially, and financially. If you are not happy with the way I’m living, that’s your problem.” I am the Gargoyle King 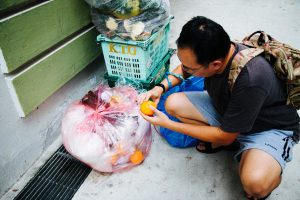 Eat your food. All of it.