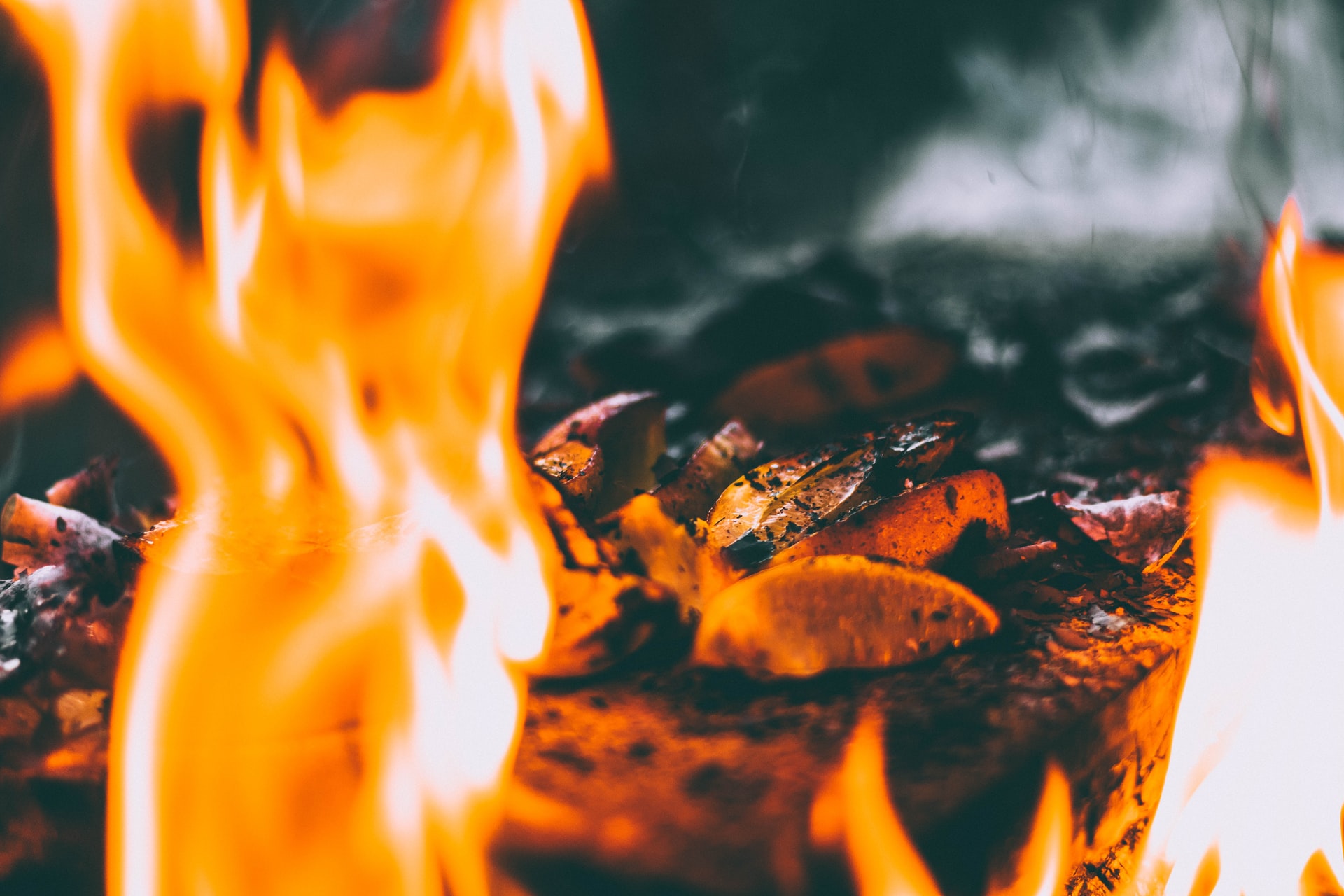 As if a separatist struggle and a pandemic were not enough, locals in Ukraine set fire to grass (an offence that carries a fine). Since April 4 the blaze has spread, creeping frighteningly close to Chernobyl’s exclusion zone. Yes, that’s right. Chernobyl.

The site of the worst nuclear disaster in history. The government has since tracked down and arrested the arsonist and said that the fires are under control. But Greenpeace Russia has added a note of caution: this is the worst blaze they’ve seen in decades and has reached within a kilometre of Chernobyl’s defunct plant.

2. Second Source of Proof That The Apocalypse is Here: a Swarm of Locusts

By now you’ll have heard grim proclamations by citizens in the global south that starvation will get them before the pandemic does. This is proving to be the case in countries across east Africa.

Billions of locusts in swarms that are twice the size of Singapore have descended on countries like Ethiopia, Sudan, Uganda, Eritrea, and Tanzania. They’ve eaten their way through sorghum, wheat and corn crops and destroyed grazing land for cattle. The pandemic had already affected livelihoods and a fragile healthcare system in Africa. The locust swarm is only going to make that worse.

An aside about locusts: they are short-horned grasshoppers. They’re usually solitary but if a wet season follows a drought, these perfectly innocuous, usually harmless creatures get a shot of serotonin in the brain (that chemical which makes you feel happy and sexy) and, well, become insanely sociable. They also breed like crazy. And eat. Hence the swarms.

Wingless nymphs become winged adults and voila, what is basically a massive locust party spells disaster and death for humans. To give you a little perspective: a swarm can typically eat in one day, the same amount of food as 35,000 people. Gives you a whole new way of thinking about hedonism.

3. Further Proof That Nature Doesn’t Give A Crap About Your Future Plans or Your Historical Heritage

Lightning and thunderstorms have been decimating structures, killing people and wreaking havoc across provinces in Cambodia. Nothing has been spared, including the country’s iconic Angkor World Heritage Site in Siem Reap. Seven large trees were struck down in the Ta Phrom and Angkor temple complex areas. Local businesses have also suffered damage.

A significant drop in footfall due to the pandemic though, does mean that these ancient temples will suffer less damage caused by thousands of tourists haphazardly climbing and touching the structures, just to take dumb-ass selfies.

Also in happier news, the Indochinese silvered langurs, which are endangered according to the International Union for Conservation of Nature (IUCN), are thriving in eastern Cambodia. The latest count is 3,000. They are technically safe in wildlife sanctuaries. But illegal loggers and wildlife hunters don’t give a shit about biodiversity or about forests. So maybe the pandemic is keeping the jerks away, and the langurs are sleeping better at night.

4. Indigenous Nations in Brazil For The Win

By now I think we’ve established that much of the world is currently being governed by idiots. They tweet, they say stupid things on Facebook, they disavow, they denigrate and they destroy. Brazil’s President Jair Bolsonaro is no exception to this rule.

As if his attitudes to the pandemic weren’t maddening, his administration also represents the most recent, devastating threat to indigenous peoples and biodiversity in the Amazon.

But you don’t fuck with indigenous peoples and get away with it.

But here’s the twist: the Kinja people have been given the right to respond, and the government has been ordered by a federal judge in the country, to publish that letter on all government websites for 30 days. This terrific judge has also ruled that the government needs to develop an anti-discrimination indigenous program and actively work to discourage officials from engaging in racist rhetoric and inciting racial discrimination.

That would be like giving migrant workers in Singapore the chance to … oh wait, okay nevermind. Or a judge ordering a government official to apologise for that discriminatory statement about a virus clearing out a … okay, yeah. No that won’t happen.

5. The Next Time You Want to Insult Someone, Don’t Call Them a “Neanderthal”

Because to you, a piece of string or cord that you’re fiddling with might be proof that your clothes are fraying, or that you’ve been watching your cat play with it all day and you are slowly losing your mind in lockdown.

But to the team of archaeologists and paleoanthropologists who found a fragment of cord attached to a long stone tool in a cave in France, it’s exciting proof that Neanderthals twisted barks, fibre and other materials to make clothes, bags, nets and other implements. It means they were engaged in multiple, sequential tasks.

So they understood numeracy and had context-specific memory. That’s on top of the fact that they made art, strung beads, controlled fire and you know … hunted large fucking animals.

And you can’t even figure out how to toggle between presentation, grid and speaker views on Zoom. Shame on you, you Homo Sapien.

6. A New Era of Performance Art Emerges in Indonesia

To my editors: no, this has nothing to do with the dreaded C-19 pandemic. This is a performance art initiative started by youth in Kepuh village, Java, Indonesia to revive, interrogate and investigate the dreaded pocong figure from Indonesian folklore.

Said to be the soul of a dead person trapped in its shroud, young Indonesians have been exploring how the pocong speaks to the “dematerialization of the art object”, and successfully blends the pre-colonial folk stories of Javanese people with modern-day anxieties around survival and resistance to political corruption and ineptitude. “Our politicians are like pocongs, neither dead, nor alive,” one young artist remarked, on the sidelines of a performance piece.

The performance art initiative has involved several people dressing up as the undead / wandering souls and hanging out on benches, doing nothing (it’s difficult to move when you’re wrapped up like a corpse).

Sightings have caused widespread panic and villagers have begun staying indoors to avoid the pocong figures. Authorities, who have thus far failed miserably at imposing curfews and lockdowns during the pandemic, have thanked the artists for contributing to the national effort to beat the spread of Covid-19 in Indonesia.

Meanwhile in Singapore (saving the best for last) …

7. Proof That Counselling And Therapy Should Always Be An Essential Service

The Adult Protective Service says that the number of seniors and people with disabilities who have been abused has doubled in the last few years. Last year, a total of 209 cases were reported. Most of the abused were hurt by their children and stepchildren. If this isn’t proof that there are plenty of people in dire need of counselling support, we don’t know what is.

Here’s a wild suggestion: keep the abusers in indefinite lockdown and let trained caretakers and therapists (and other decent folk) out  to enjoy the great outdoors and their civil liberties, when the pandemic ends.

8. Because Those Government Payouts Are Not Enough, Two Idiots Start a Side Hustle

A 19 and 20-year old duo scammed more than 80 people out of $30,000 by pretending to sell Nintendo Switch consoles on Carousell, at a time when the prices of consoles have surged over three times to $650. They got paid and the consoles never materialised. Neither did the guys. They did get caught though and investigations are ongoing.

But look people, it takes two hands to clap. I get it. You’re going stir-crazy during the lockdown, but you haven’t turned into a blubbering idiot yet. So the next time you think you’ve struck gold and got a sweet deal on a much-prized material object to tide you through these tough times, think twice before you press the “Deal” button. Because someone’s hustling you.