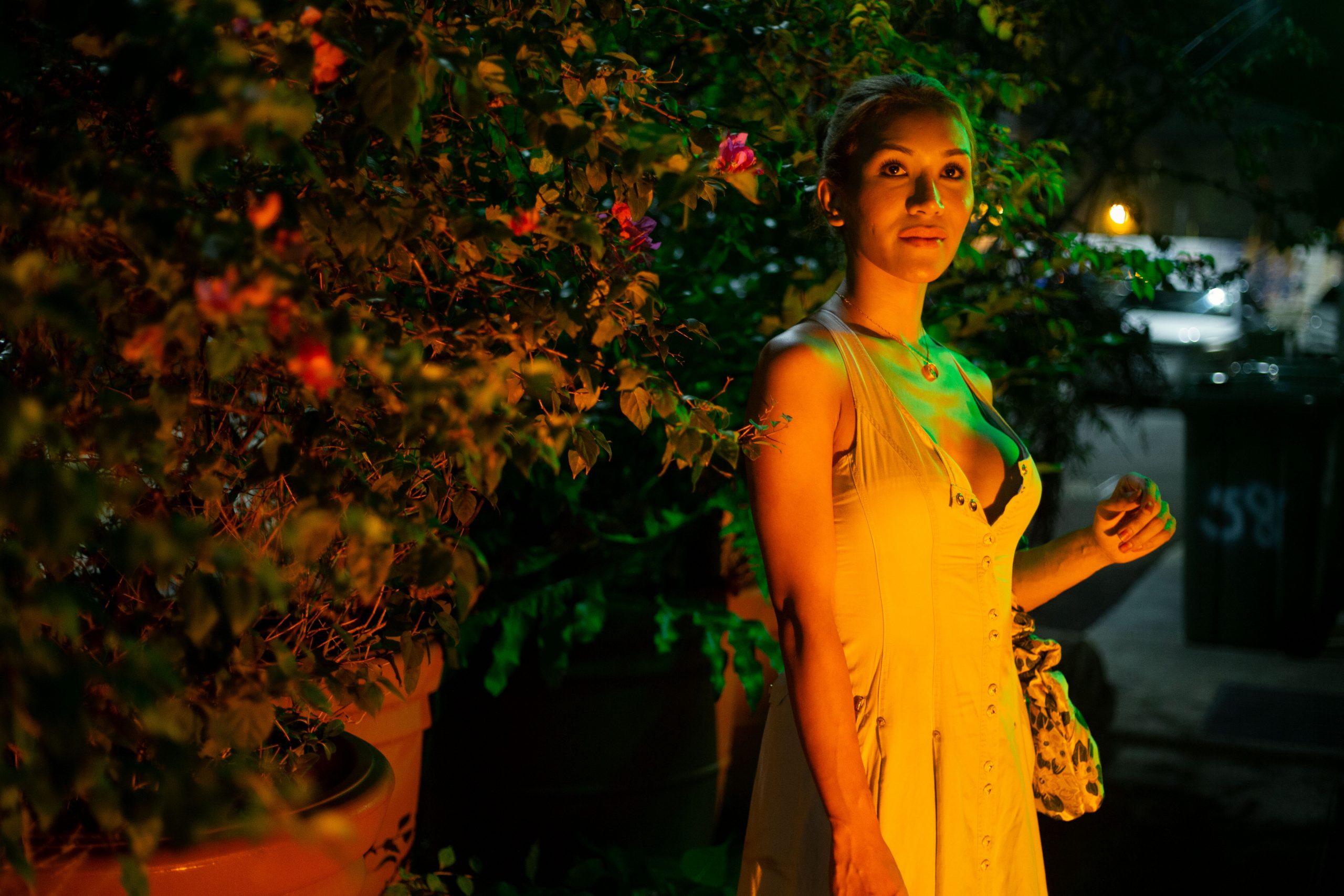 I remember the first time I wandered the back alleys of Geylang close to 10 years ago. As a teenager, I knew I had to experience the vice central everyone would chatter about at least once in my life.

It was a grim but beautiful sight. Fluorescent blues and pinks from the brothel’s neon signs lit up the dark alleyways. Along the streets, sex workers could be seen sitting on chairs or leaning on walls, lining the back alleys, and in dark corners, men would huddle over propped up tables to gamble, surrounded by the smoke of contraband cigarettes sold footsteps away.

“When empty, Geylang looks holier than ever”

Now, the sight is vastly different. As I turn off Geylang Road and wander down Lorong 20, the only other person in sight is a lorry driver, and the brightly lit brothels from my memories look like run-down terrace houses instead.

“What you see now is what we used to see at 3 am,” Sheeda says, a 42-year-old trans woman who has stopped working as a sex worker since Geylang started to experience a fall in foot traffic. It’s 8:30 pm, but between pandemic regulations and increased police surveillance in the area, there is no sign of life.

The irony is that when empty, Geylang looks holier than ever. The dozens of temples that share a neighbourhood with the red light district are open and thriving, and without the neon lights drowning out the religious paraphernalia, I am reminded that Geylang is the neighbourhood with the highest concentration of both brothels and religious institutions in Singapore.

As we approach the last corner of Lorong 20, Sheeda stops and stares in the distance in silence. “That was where I used to stand,” she mutters, pointing at a shabby house partly hidden by a blue minivan.

While I have seen the neighborhood in its prime, this is my first time intimately understanding the fabric of the place. Every alleyway we wander through brings up a new story from Sheeda—the people she met, the network that existed, and the interconnected nature of every individual making a living here. The first story she shared was of how she became the “mother” of a fellow sex worker, Sherry, who worked on the same street as her. Being older and more experienced than Sherry, Sheeda became a guiding figure.

How Geylang was a support system for many

As we chat, we make another stop in front of a house where Sheeda would rent rooms to use with her clients. Soon, the uncle living in the house steps out on the porch in a white tank top and boxers, greeting Sheeda. I overhear him asking her, with concern, why she has lost so much weight since he last saw her.

“I don’t recognise this place anymore,” Sherry shares as we wait on the sidewalk. “I don’t feel the vibe. To me, Geylang is about the neon lights, the human traffic, my friends, and the community. Now, it’s so dark. No one I recognise is here.”

Sherry is one of the few street-based sex workers who has been able to successfully move her business entirely online. Maybe it’s because she got a head start—Sherry saw that Geylang was on a decline for many years already, and started transitioning away earlier on.

“I wouldn’t say it’s ending, I’d say it’s already over,” she continues candidly. “At least for me, it’s been proven since 2019 or 2020 as I would rarely get clients.” While the falling foot traffic pushed Sherry’s business online, it pushed Sheeda to leave the industry and become a food delivery driver.

The changing veneer of the red light district

If Geylang as a vice central is really over, there’s no denying it is the loss of an underground attraction. But what is more pressing is what will happen to the sex work industry, an issue both Sherry and Sheeda share concerns over.

Most young sex workers are moving their business online, and the rest, including some brothels, are moving to the heartlands. With this, the main grievance they have is about the lack of centralisation of sex work. It’s not the first time they have had to move their endeavours from area to area, but it might be the first time that they won’t have a physical base at all.

Sheeda tells me that she started working at Changi Village when she was only 17, before eventually moving on to Clarke Quay, Woodlands Gardens, and then finally Geylang—one of the last thriving red-light districts at the time.

It’s a story that repeats itself. Sex workers, and specifically trans sex workers, have had their spaces removed time and time again. In the 1950s, Bugis Street was a thriving place for trans women and sex workers, but by the 1970s, the police came down especially hard on their community, pushing them to Geylang. And now that Geyalang faces the same fate as Bugis Street, Changi Village, or Woodlands Gardens, there seems to be no new affirmative base for their community.

“I’ll be worried if the industry disperses further because that can cause additional stigma or discrimination towards sex workers,” Sherry confesses. “The heartlands are family places, and if more massage parlours pop up with women in skimpy clothes, it may cause friction with residents.”

To avoid this tension, some may ask why sex workers don’t take their business entirely online. But what I find out, and am surprised by myself, is how many sex workers are not young and tech-savvy. For them, online work is not an option.

Geylang: a sanctuary for the novice

Nur, a 57-year-old woman who spent a few years as a sex worker when she turned 51, tells me about her struggle entering a business she knew nothing about at her age.

After falling into debt with someone she thought was a friend, she had to find a way to pay her loans back fast. The only place she thought this would be possible is Geylang. “I had no clue what to do. I came down, sat at the coffee shop and observed what people were doing. Eventually, I put myself out there more and more until I started getting clients,” she recalled.

“You know, before that, I had never been with anyone but my husband,” she whispered.

She admitted that younger sex workers had suggested she tried finding clients online, but she had no idea how to start.  “I don’t have a good phone,” she says laughing. “Only can WhatsApp.”

Luckily, Nur had a support network of sorts in Geylang after meeting volunteers from a women’s organisation nearby and from the other women she calls her colleagues. She joked about how they would call her the “sleeping queen” because of her ability to sleep through the night on her chair.

However, by the end of 2017, she started noticing a difference in Geylang. Mostly that foot traffic was dropping, but also that it was becoming more dangerous. She got robbed multiple times, and multiple clients would refuse to pay for her services, even getting violent at times. Thankfully the community she built in the area was there for her, helping her lodge police reports and offering her a bed to sleep on when she had nowhere else to go.

It’s not that much safer online

While it may appear that working online is safer than on the street, it is often the opposite.

Before settling on being a food delivery driver, Sheeda attempted online sex work. “Online, it is much harder,” she says. “Clients are so demanding. They ask for so many photos before agreeing to meet. Then if they agree to meet, they often don’t show up. They also play horrible pranks on us, like pretending to be the police. It’s a lot of time wasted for a small return.”

As a physical space, it seems that Geylang provides sex workers with a shield from the many dangers one can encounter. When Nur got robbed, women in the area helped her lodge a police report. Sherry tells me about the multiple times she had to run into rooms to help her fellow workers when she would hear them scream. And Sheeda’s interactions with the uncle from the house show the neighbourly affection at play in the area.

But just as I catch myself romanticising Geylang because of these small affectionate moments I witness, I am reminded that it remains a place of broken dreams.

Preparing to end my walk and go home in the wee hours, I stumble upon an Indian sex worker sitting in an alley, watching a television series on her phone with her earpiece plugged in. At first sceptical when I strike a conversation, she slowly opens up.

A mother of two in her forties, she tells me she’s been working in Geylang since the 90s. She tried different jobs, such as being a cleaner in a community club, but soon found herself here again. Dealing with various personal issues—from a drinking problem to the death of her ex—she naturally drifted back to the neighbourhood she knew how to manoeuver.

But as fewer clients visit and sex workers take on new, more modern paths, the layers of the community are chipping off. There is no one left to rush in when a worker screams or when a colleague needs to face the police. These streets, which have been considered dangerous to so many, have been a safe haven for many at the same time. But the sanctuary is running dry, and it’s looking irreversible.