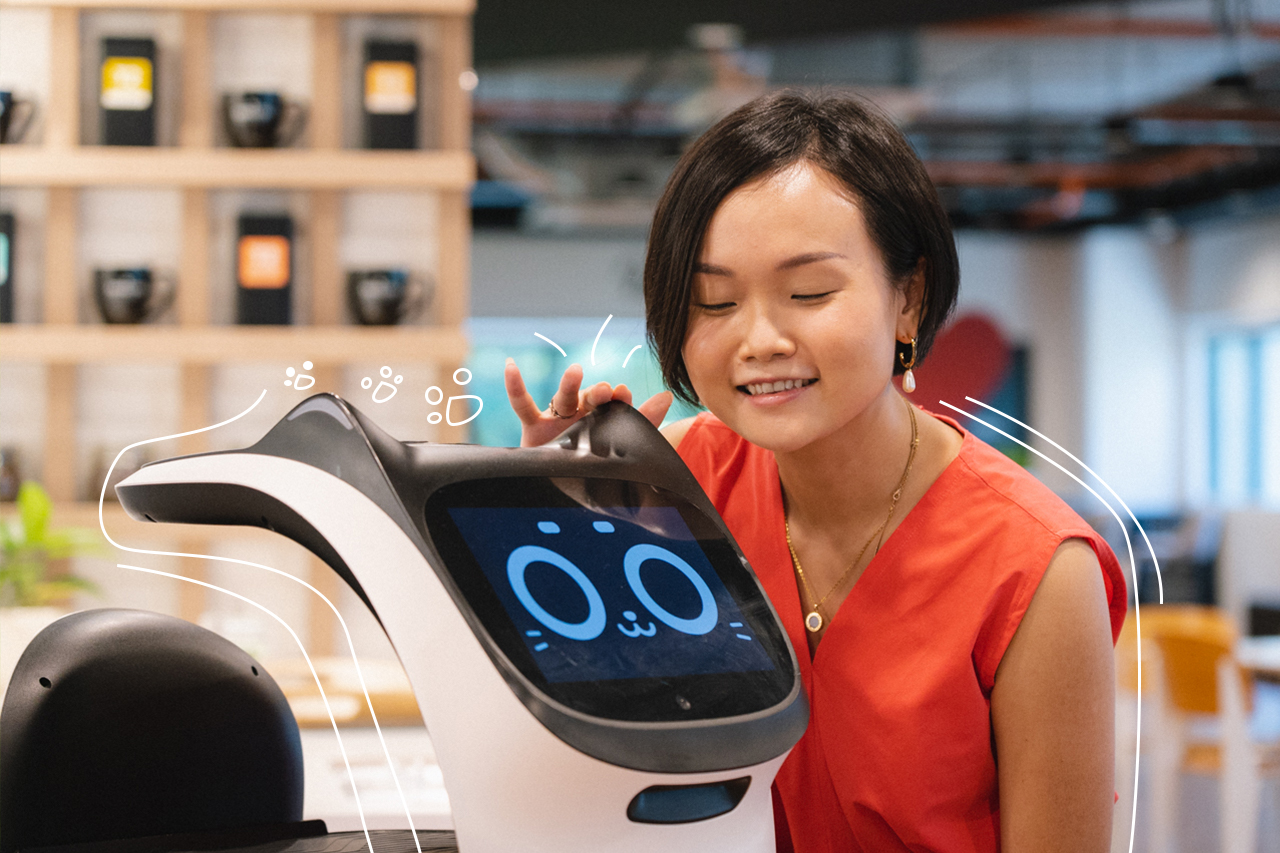 It’s the last thing I expected to hear from 30-year-old Qi Ni. I first imagined her to be guarded and painfully civil, the same way most ‘corporate’ people are. You know the ones.

She giggles, slightly conscious of the big words coming my way.

Qi Ni notices the confused expression on my face. She’s seen it before. Whenever she brings up her job title, most people fail to understand what it even entails. The fancy-sounding designation is only what’s on name cards and e-mail sign-offs, though. For her, happiness at work goes way beyond that.

Where she works is Sodexo, a global food services and facilities management giant which professes an altruistic mission. They implement systems that help prevent food waste and ensure that more kitchens source ingredients ethically.

But first, let’s paint a better picture of who Qi Ni is. By definition, Qi Ni is a millennial. Yet, she’s often described as a concerned ‘aunty’ by those who know her. She also sees herself getting more aligned with Gen Zs in thinking about purpose.

She’s the kind of person who requests for less portions when buying food—she hates contributing to food waste. She’s the same person who’d tell friends to donate to charities of their liking instead of buying a gift for her birthday.

Her own wedding, in fact, was far from the opulence of a hotel reception. She chose Enabling Village, a community space which celebrates inclusivity.

This predisposition for selflessness is few and far between in an increasingly self-centred world, so much so that it can be mistaken for an act.

Like a trusted ally in the corporate world, Qi Ni attempts to improve things that are increasingly important to the younger workforce—things like company culture, mental health support and flexible working hours.

What Makes People Happy at Work? (Aside From Pay)

For many, life used to revolve around work alone. Even when it sucked, we were told to suck it up. That started to shift in 2021. A phenomenon now termed The Great Resignation.

Post-pandemic, people were trying to return to ‘normal’. But that ‘normal’ was terrible. Quitting became an option for many. If not, they resort to quiet quitting to build healthier work boundaries.

After all, why go above and beyond for an organisation that doesn’t love you back?

Old ways had to go out the door—for some companies, that meant implementing flexible work practices. For others, that meant greater emphasis on nurturing mental health.

In other words, there’s a labour shortage. It’s finally forcing employers to think deeper about their company’s mission and strategy.

“We’re living in a transformative era of the workplace, though we don’t often realise that,” Qi Ni remarks.

According to this recent Straits Times article, however, only about six in 10 employers are actively taking steps to address mental health challenges—a number much lower than the global average. Additionally, two in five workers will not accept a job if there are no flexible working arrangements today.

As someone who started her career in human resources, Qi Ni would be familiar with these issues. It amplified her ability to see things from a potential employee’s point of view. According to her, what young hires essentially look out for are companies with a genuine purpose.

“To the younger generation, the world is burning down. If you’re a company pursuing short-term profits at the expense of communities and the environment, it’s likely you’re not going to be their top choice,” she remarks.

“What’s your company’s purpose?’, they’ll ask during the interview.”

Gen Zs aren’t weak either. They’re simply more vocal about their demands and expect more from their employers.

People like it when there’s meaning built into the company culture. They want a rock-solid understanding of the organisation’s purpose, and how their individual work contributes to the larger picture. It’s clear that if old guards refuse to budge in the short term, it’ll come to hurt the business.

Qi Ni observes something else crucial to understanding Gen Zs: it’s a generation that doesn’t feel the need to stay in jobs that make them feel miserable.

“Honestly, I can relate to that. If I ever face personal issues—say, marital problems—Sodexo thankfully has an employee helpline where I can speak to a trained professional.”

How a company supports their employees gives significant weightage to job seekers these days. Potential hires are often impressed to know that such resources are available.

“That said,” she warns, “there’s still so much more to be done.”

Qi Ni always brings an extra reusable bag and bottle wherever she goes. You see plenty of white-collar workers like her at lunchtime. But, as with many of the things she does, it has a deeper meaning.

Much like her company, she’s devoted to things related to sustainability and food insecurity.

In fact, who she is as a person and who she is at work isn’t that much different. Qi Ni sees her role as a consultant. Or, in less corporate terms: a fixer, a troubleshooter. The list goes on.

A typical day sees her appearing on virtual calls and travelling across the city to figure out what exactly clients lack. Is it to reduce food waste? To hire inclusively? Or support non-profits and social enterprises? Those are all within her realm of expertise.

Change comes down to the little things. She knows this better than anyone else.

“For example, this means advising clients to reduce their carbon footprint,” she explains. “Our on-site kitchens purchase ingredients ethically from places that don’t overfish or threaten the biodiversity of our oceans.”

At this point, she visibly perks up. Some of her recommendations for hiring have already seen real-world applications.

Qi Ni understands the importance of giving equal opportunities to these employees. “Even in a micro-kitchen or busy production setting, there is room for these employees to grow their skills.”

On top of all that, Qi Ni also has the gargantuan task of representing Sodexo. She is part of the Alliance for Action on Corporate Purpose (AFA-CP), which works on a framework and blueprint for other companies to follow in a sustainable spirit.

That’s not including her involvement in the Company of Good Fellowship, where she works with like-minded professionals to design strategies that’ll generate positive change.

Not all organisations are receptive to change, of course. There’s often inertia. Even as people’s approach to work evolves, much of our workplace functions have remained the same. It’s a matter of sussing out those who may be more sympathetic to the cause.

“There will always be some leaders that are more open to trying new things. We work together, and when we do get the job done, they become successful case studies. Anonymised, of course!” she laughs.

“I can only hope that it gets the ball rolling.”

The word ‘purpose,’ especially when thrown around haphazardly these days, can start to lose its meaning. To many, especially Gen Zs, it almost comes across as a feeble corporate attempt to turn human feelings into productivity.

But purpose runs deep. It’s way more personal than calculated marketing campaigns, as Qi Ni emphasised. Forget ping pong tables and a superficial ‘we are family’ culture. It’s ethics and principles—a fundamental shared value that will keep people motivated to do the work they do.

“Terms like sustainability and inclusivity are sexy and trendy, sure. But what’s most important to me is moving things forward, even just a little.”

Imagine a job that’s not just meaningful, but where efforts actually matter. More than anything, Qi Ni finds joy in knowing that her efforts amount to actual impact—both on the environment and people at large. Her company’s purpose first aligns with her own, and that’s the cherry on top.

“Let’s start with this: Companies need to see employees as more than just a number on a spreadsheet,” Qi Ni concludes.

“We have to see them as who they are. This human connection goes a long way. It goes down to the way job ads are written.”

With clear purpose, jobs may no longer prompt the same sense of dread when the morning alarm rings.

I’m no boss, but there seems to be a business case for it at the end of all this.

Isn’t that, then, a win-win situation?

This story is brought to you in partnership with Company of Good.
Join the movement towards corporate purpose and make your business a force for good.

Do you love or hate your job? What do you look for in a workplace? Share your thoughts with us at community@ricemedia.co. And if you haven’t already, do follow RICE on Instagram, Tiktok, Facebook and Telegram. 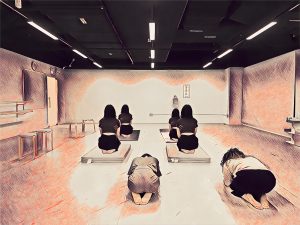