‘Everything, Everywhere, All at Once’ — a Grandiose Parable About Stress 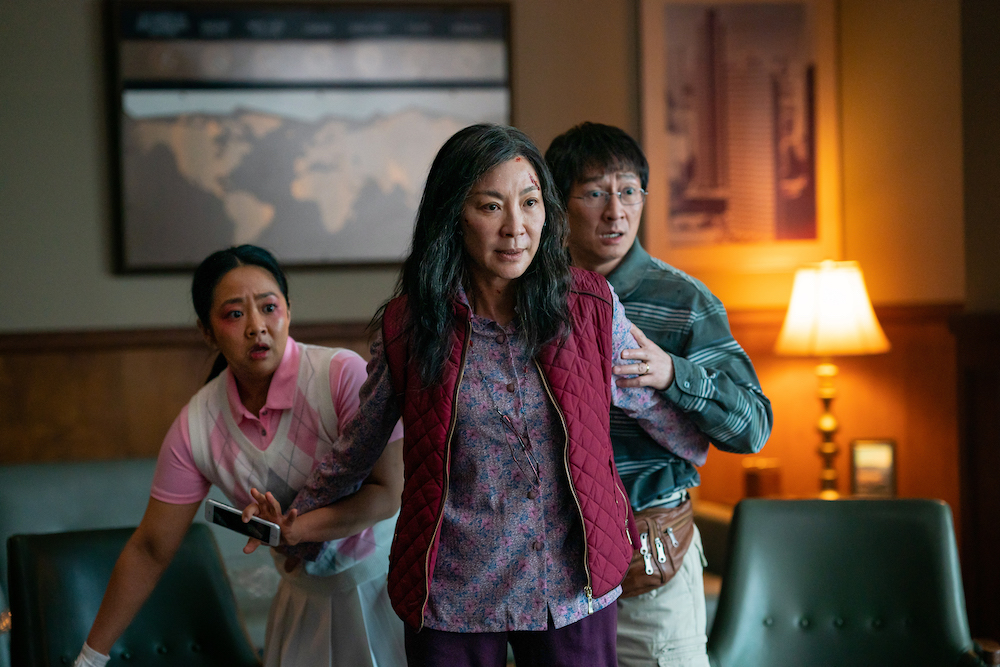 Evelyn Wang (Michelle Yeoh) is one stressed character in Everything, Everywhere, All At Once. She’s a middle-aged woman dealing with taxes and audits (hope you filed your taxes, the deadline was 18 April), the burden of parental expectations, a daughter who doesn’t quite share the same views as her, a husband whom she frets about, and a laundromat business that is on the brink of failure.

Oh, and she also has to save the multiverse from a great evil by learning how to connect with alternate versions of herself from different universes. I feel my blood pressure rising just writing about everything on her to-do list.

In many surprising (and unsurprising ways) Evelyn is a lot like a typical stressed-out, society-affirming, identity-questioning Singaporean. Still, an oddly relatable character is not something you’d expect to find in science fiction action film Everything Everywhere All At Once. With the Russo brothers (famously known for Avengers: Infinity War and Avengers: Endgame) as the producers, you’d expect a wham-bam-pow kind of movie that would make the most out of Michelle Yeoh’s martial arts background.

It does, of course. The action doesn’t disappoint, and the fight scenes are beautifully choreographed lending a sense of breathlessness to the battles that pepper the film (mostly in the first Act though). And it’s this feeling, that you can’t quite catch your breath, that helps cement this film as a parable about stress and living up to one’s potential.

The multiverse, as portrayed by the film, is meant to be a metaphor for Internet overload. But really, it’s just an overload of life in general. Evelyn has so much on her plate, so many places to be, so many things to worry about, so many tasks to accomplish that really, the film’s title could refer to just this one life of hers (instead of her many lives across the multiverse) and it would really be Everything, Everywhere, All At Once.

Isn’t that just like our Singaporean lives? Having to be everywhere, having to do anything, having to do it all at once just to survive. And with inflation hitting our pockets, isn’t it more important than ever that we do it all and go everywhere at the same time, lest we find ourselves in dire straits?

But, remember, Evelyn is Asian. And that means she has so much potential—potential that she doesn’t quite live up to, as she is reminded. That becomes another stressor of sorts midway through the film, especially when she’s told, to her face, that she has more potential than all of her alternate selves but she never lived up to those aspirations (read: she’s a failure).

It’s tiring. And Evelyn feels it. Just as you would, as the film sends your blood pressure spiking and you find your breaths coming faster and shallower. It’s the sheer pressure of existence, of living, of being everything, everywhere, all at once.

What’s the antidote to that, then?

What the film seems to postulate is that the panacea to this stress to be all things is love in the form of acceptance. To accept everything—people, objects, and situations—as they are. And loving them all the same.

On a broader level, it also means to accept everyone regardless of what defines us—race, language, religion, sexual orientation, educational background, or political affiliation.

Everything, Everywhere, All At Once is a grand, ambitious tale about the multiverse, potential, and paths not taken. But on a more personal level, it’s about stress and how love is the cure for it. And at the end of the day, to be less stressed, we should be more accepting of everything, everywhere, all at once. There really isn’t anything more to it.

Everything, Everywhere, All At Once is out in cinemas.