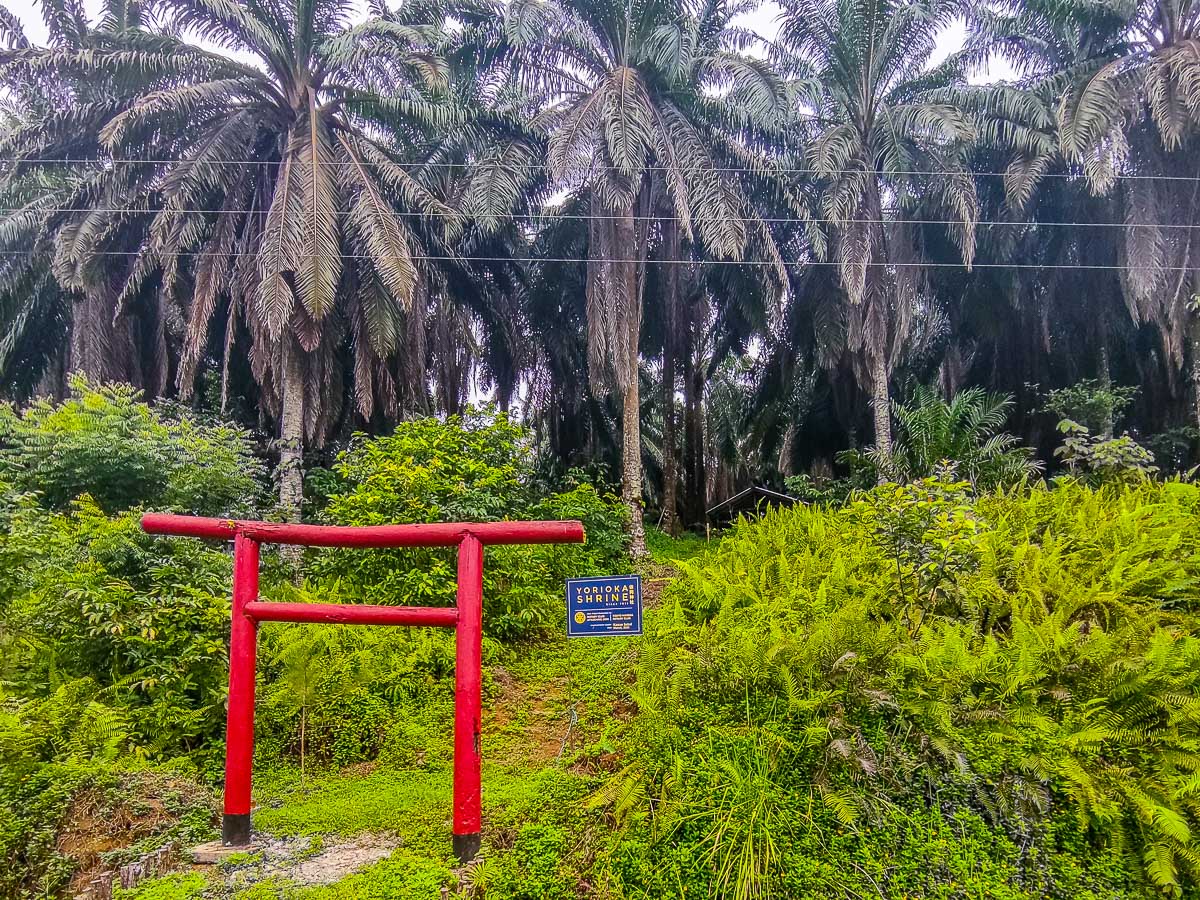 All images by the author for RICE Media

The tales exchanged among the villagers of Kampung Seniawan Jepon, Kota Samarahan in Sarawak continue to haunt their hearts. The whispers keep people on their toes, especially at night whenever they approach the Yorioka Shrine.

Here is a Malaysian village with a bonafide Japanese shrine. Since it was built in 1911 to protect the former plantation estate, the Yorioka Shrine withstood more than a century of peace and chaos.

Before restoration works in 2019, the shrine was left abandoned, covered in vines—its faded paintwork partially swallowed by wild bushes. The structure remains a ghost of its former glory.

And when dusk hits, a heavy cloud of eeriness descends around it.

“Some villagers recall seeing two ghosts resembling the Yorioka brothers at night,” 50-year-old Haji Anuar Unid shares. The brothers, he tells me, were the ones who brought Japanese migrants to the area to transform it into a rubber plantation.

Another urban legend lurking among the villagers tells of a mischievous boy who disturbed the serenity of the shrine and lost his mental faculties as a result.

Anuar is the current village head. He informs me that the urban myths are rooted in the days when the Japanese migrants worked together with the locals. This easy alliance came to an abrupt halt during World War II when the Japanese came to be known as the enemy of the land.

A red torii gate perched at the bottom of a slope in rural Kota Samarahan marks the entrance to the Yorioka Shrine.

Today, a field of palm oil trees surrounds the shrine. But in the early 1900s, it stood in the middle of a bustling 1,700 acres rubber plantation run by a Japanese enterprise.

They entered the country via an invitation from the second White Rajah—a King in modern terms—of Sarawak, Charles Vyner Brooke, to work on the rubber plantation.

“During that period, the rubber industry was a global focus in earning revenue due to its high demand. Seeing this, Charles invited the Japanese in to help develop the industry as they were well-known for their agriculture techniques and technology,” said Sakai, a Permanent Resident in Sarawak hailing from Japan.

When they came, the Japanese brought along their beliefs of protection and blessings in the form of a shrine.

“The Yorioka Shrine was made of wood from a Sakura tree brought over by the Japanese. Although a century has passed, the structure remains intact and solid—a testament to the workmanship and technique used back then.”

Sakai first stumbled upon the shrine in 1982, after she migrated to Sarawak from Japan.

“I heard about it from my patrons when I worked in a restaurant. I was shocked to see the shrine as I never thought there would be something like this in Malaysia,” she recalls.

“Back then, the roof of the shrine was leaking. The structure, though dilapidated, remains standing. No nails were used when building it, so there were no signs of rust. But when I revisited a year later in 2018, I saw trees and vines growing around it.”

In 2019, Sakai decided to work with Rotary Club Tokyo Haneda on restoring the shrine. “When the contractors came, the manager requested to conduct a Chinese prayer ritual to ward off any bad energy as we are dealing with sacred ground,” he recalls.

The Yorioka Shrine was named after ambitious tradesman Yorioka Shozo. He met Charles by chance in Singapore in early 1910.

According to the book ‘Three White Rajahs’ by Ranee Sylvia, Charles was in Singapore to seek medical attention.

When he recovered and made plans to return home, Charles invited Shozo along to execute the strategies they’d previously discussed about developing a rubber plantation in Sarawak.

Shortly after, Shozo started work on the rubber plantation in the village with the help of Malaysian locals. He then returned to Japan to get supplies, materials, and a workforce to help develop the land. In late 1910, Shozo returned with labourers, teachers, doctors, and acupuncturists who brought along their family members with them.

Despite his ambition to see the project succeed, Shozo did not manage to see the completion of the rubber plantation. According to Sakai, Shozo died of malaria two years later.

“Nonetheless, his brother, Yorioka Shosuke, shared the same vision as Shozo and continued the work at the rubber estate.”

Under Shosuke, the estate expanded into the agriculture business of planting rice, pineapples, and black pepper. The plantation brought the estate a sizable profit.

“A percentage of it was invested in various companies in Japan. Several of these companies—such as the Sapporo Beer and Nippon Steel Corporation—are still around and have become successful.”

Shosuke worked on managing and expanding the estate until 1937, when he passed. It was then taken over by different management, the Nissho-Iwai Corporation (known as Sojitz Corporation today). The estate halted its operations during the Japanese occupation in 1941.

Out of Sight and Mind

The drive from Kuching to Kampung Seniawan Jepon takes an hour and a half. It was no surprise then that not many in Sarawak have heard of the 1910 Japanese settlement. A long drive out is a sure way to ensure history remains hidden.

Upon my arrival, I meet up with the village head, Anuar. Our first stop is the Yorioka Shrine, now standing on land owned by a local businessman.

Near the shrine, there is a store room used by the Japanese labourers to store farming equipment, supplies and materials. Anuar tells me that it was used as a strong room during the war.

“The Japanese soldiers turned the store room into a place where they stored weapons and armour. It was also said that, after the war, the tiny windows of the room acted as a conduit for money transactions between the locals.”

Just above the room door hangs a sign with a Japanese inscription that has since been carefully cemented over by the villagers. This was done out of fear of being accused of supporting the Japanese enemy.

As I enter the room, a pungent smell hits my nose, reaching the back of my throat. This was accompanied by a cold draft. It chills up and down my spine.

Anuar shares that during the war, the room was where Japanese soldiers decapitated the heads of those deemed disrespectful.

So that explains the eerie feeling.

“The soldiers were cruel. They would just slap whoever looked down on them. If they saw that you had crops on your farm, they would steal it in front of you,” he added.

Anuar takes me to see a big water tank, now unused, built by the Japanese and is a stone’s throw away from the store room. A Japanese logo remains visible, albeit faded, on both sides of the tank.

A walk further from the water tank and we see the rubber processing machines used back then. Some parts of the device look new, however.

Anuar explains that the rubber plantation was maintained until the 1970s. “Hence, certain parts of the machine that were broken were replaced with newer ones.”

Amongst the other things the Japanese left behind were 13 ponds used to grow paddy. The site started with 300 acres in 1932 and had grown to over 1,000 acres five years later. Paddy farming halted due to the war.

Nonetheless, the ponds became the village’s water source until the 1980s. Running parallel to the first pond, Annuar shows me rail tracks built to assist the labourers in their work at the estate.

“These rail tracks were used to push carts from one end of the village to another. There used to be a rail track in front of the shrine, but it has now been replaced by roads. Otherwise, it used to stretch to the Kota Samarahan bridge,” he said.

The same bridge, Annuar reveals, was a waft in the early 1900s. It was where Shozo and Shosuke, alongside the migrants, parked their boat.

“Though the boat is now destroyed, parts of it are still around. It is displayed at the bridge as memorabilia from the past.”

Local Developments From the Estate

While Charles’ vision of the estate was to boost the country’s economy via the rubber industry, it has also helped the villagers socioeconomically. When Shozo and Shosuke set up the plantation, they hired the villagers to develop the estate alongside the Japanese migrants.

“Before the Japanese migrated to Kampung Seniawan Jepon, the village went through a period of extreme poverty. There weren’t many job opportunities. Many relied on food resources from the jungle. Even that was scarcely available,” Anuar explains.

As the head of the village since 2007, Anuar’s affinity and knowledge of the abandoned shrine are unsurprising. During our meeting, he disclosed that his grandfather was a labourer at the rubber plantation where the shrine is housed within the estate.

“When he was a little boy, he worked as a food delivery boy at the estate. I recalled him telling me his monthly wage was between 15 and 25 cents. Back then, he could buy a lot with just that. It is equal to RM1,500 today.”

When he came of age, Annuar’s grandfather started working at the estate as one of the labourers. His job was to chop trees.

“By this time, his monthly wage increased to 25 cents.”

The Value of Restoration

We are often told horror stories of how the Japanese traumatised us during the war. Through our history books, we are taught that in the olden days, the Japanese were cruel and heartless.

To this day, some of the older folks in Sarawak still boycott Japanese brands.

This year marks the 111th year of the shrine. Although it has been a century, the shrine and its history have yet to be widely known in Sarawak.

“For me,” Sakai adds, “this is an important historical site as it shows that the Japanese once lived harmoniously with the residents in Sarawak.”

Sakai also shares her appreciation for the locals as they did not destroy the shrine, given the atrocities they suffered at the hands of her fellow countrymen during World War II.

“History cannot be bought with money,” she adds. Sakai is, of course, referring to the age-old debate of restoration versus replacement; to wreck or to recreate.

“Even if you remake it,” Sakai offers, “it is not authentic”.

In many ways, Sakai has a point. In the case of the Yorioka Shrine, the decision to restore would go a long and useful way in letting future generations of Malaysians understand and appreciate the nuanced and complex relationship the country had with its former oppressors.

It’s perhaps the best and most effective way to let history speak for itself.