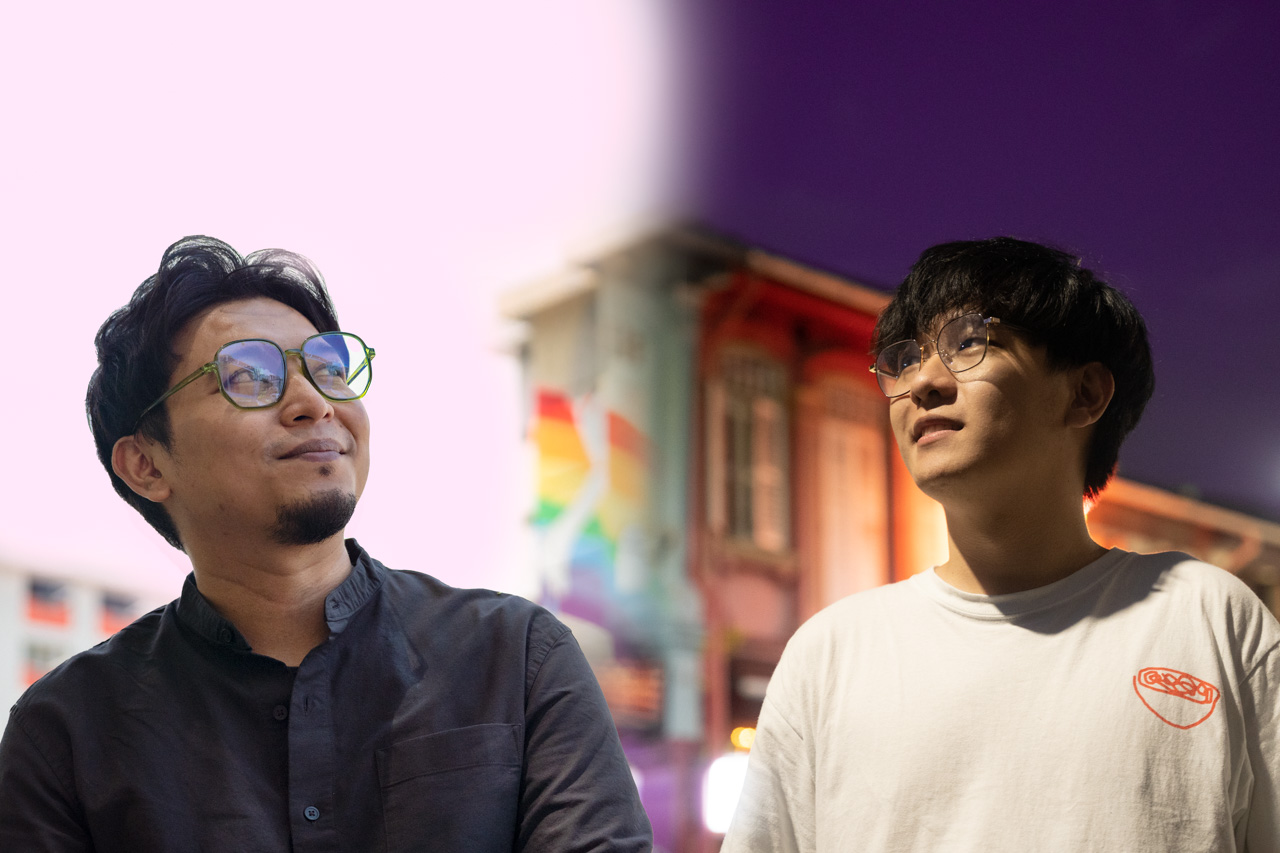 All images by Stephanie Lee for Rice Media unless otherwise stated

“The three colours of a traffic light are always red, amber, and green. But for me, the red looks more like a ‘danger’ red, and the amber looks a bit like a Fanta red or a sunset red,” says Syahid Isn.

I contemplate for a second if I should interject and tell him that the colour of Fanta is typically orange.

Syahid is a primary school art teacher and home baker who bakes cookies and elaborate custom-designed cakes for his clients.

When a friend asked him to make a cake that looked like a stack of pancakes for his son’s first birthday, he delivered. Syahid had, however, inadvertently made them pandan-flavoured pancakes—colouring them green instead of brown.

That’s because Syahid, who sometimes struggles to differentiate between brown and green (among other colours), is colour blind.

It is easy to overlook colour’s critical role in our daily lives. The colour of the lines on the road—yellow or white—informs road users what they can and cannot do. Reports and PowerPoint presentations often use contrasting colours in pie charts, graphs and infographics to convey complex information.

Colour conveys moods and feelings too. We say others are green with envy, feeling blue or are red-hot lovers.

A 2008 study showed that in scoring the performance of athletes in Taekwondo, judges have an unconscious bias towards players who wear red as opposed to blue—scoring players wearing red higher for identical performances. This, researchers suggest, could perhaps be due to how red is seen as a more aggressive, dominant colour. Or that red is simply more visually striking.

But not everyone sees the shades of red, green, brown and blue the same way.

Despite its prevalence, colour blindness as a condition often fails to receive as much attention and discussion as its more famous cousin: Myopia. And yet, the condition has real, tangible impacts on those who live with it.

Those who are colour-blind might not get to become an electrician, a chemist or a pilot. A driver’s license might be out of reach for them. Even a fun game of Twister can be a highly stressful endeavour.

And what about the pursuit of visual arts or design?

Surprisingly possible. It’s proven by both 34-year-old Syahid and 26-year-old Bryan Wu, who does art direction and graphic design in the advertising space.

They are part of a rarified group of those who pursue the creative arts as a career while staying unfettered by their colour-blind condition.

Both learnt of their condition in primary school, but for Syahid, he knew something was up quite early on.

“I am quite creative, so when I would be doing a bit of colouring in art class, I realised I could not find colours. Unless the labels said which colour is which, I could not tell what was yellow and what was blue,” he says.

“My teachers would tell me that my paintings were very strange, that I painted the sky green, and ask why I mixed (the colours) up,” he adds.

At a school health check-up in primary school, Syahid told the school nurse about the issue, who then subjected him to colour vision tests. He was referred to a specialist, who confirmed his colour blindness.

“The first thing the doctor told me was that I could not be a pilot, which crushed my dreams. I mean, being a pilot is not something most people (end up being), but it really crushed my dreams back then,” he recalls, laughing.

Bryan, like many others, found out about his condition at a school medical check-up. Presented with Ishihara plates often used in colour vision tests, he remembers not being able to see the numbers or shapes within the dots.

A trip to the specialist confirmed the diagnosis and shed light on the reason behind the quirky colour choices in his own artwork.

“When I was younger and had to do colouring, I could not identify between brown and green. I would have brown leaves and blue grapes. So when mum heard, she was like, oh, that explains why,” he says.

The Mechanics of Colour

When light—electromagnetic waves of different wavelengths—falls on an object, the object absorbs some of these wavelengths of radiation and reflects the rest. The reflected wavelengths are what we see as the object’s colour.

The photoreceptors in our retinas play a crucial role in helping “translate” or process the electromagnetic radiation that enters the eye into electric signals transmitted to the brain, which our brain interprets as images.

While not entirely debilitating in daily life, being colour-blind and working jobs where colours play a crucial role requires both Syahid and Bryan to be extra creative. Not just on canvas or Canva, but also with their methods.

“When I say let’s use the red colour (in class), and a student says that’s not red, I’ll say ‘Good job, you were paying attention’,” Syahid says.

When Syahid teaches art, he places all the colours he can recognise separately or labels the colours he intends to use so he can pick them up and use them without hesitation.

The method is not fool-proof, however. It forces Syahid to be quick on his feet when he misidentifies colours.

That said, the constant fear of inadvertently using the wrong colour is always at the back of his mind when he is teaching, which takes a toll on him.

“You just have to be very, very careful (when teaching). Some people don’t have to bother, but I need to be especially careful, which can sometimes be bothersome.”

Bryan, whose work is all digital, has several tricks up his sleeves.

One of his hacks while designing is “copying” the colour codes of specific colours or shades he wants to use from elsewhere, like Google. He would also use digital tools like the eyedropper, which allows users to pick colours from various sources.

Friends and loved ones also play a crucial role for both of them in both their personal and professional lives.

Bryan relies on his girlfriend when shopping for clothes to prevent missteps like picking up a pink shirt while thinking it was grey. Syahid often relies on his best friend who’s always a text away when he needs help recognising colours—especially when he bakes.

The Theory of Colour Blindness

There’s a perfectly logical explanation for why some people see colours differently.

Our retina contains millions of photoreceptors of two kinds—cones and rods. Colour vision is predominantly the domain of the cones. The millions of cones in our retinas can further be split into red-sensing cones, blue-sensing cones and green-sensing cones, with each, as their names suggest, sensitive to different wavelengths. These three cones work together to ensure we can see the entire colour spectrum.

Colour blindness occurs when these cones fail to work as they should.

Deuteranomaly, the most common form of colour blindness that is found in nearly 5 percent of men, is the result of the green cones not working as they should. It often leaves those suffering from the condition with difficulty distinguishing between the colours red, yellow, green and brown.

However, having deuteranomaly does not mean one will not be able to differentiate between green and brown all the time, something both Bryan and Syahid point out.

“(Being able to differentiate between the colours) depends on where you are and what light you are under. If you put yellow and green beside each other under dim lighting, I might need to differentiate them. But I can see colours better under natural lighting and sunlight,” said Syahid.

“Lighting is something that really matters”, said Bryan, pointing out that artificial yellow light, for instance, will illuminate objects differently from white light.

“I was obsessed with arts and crafts ever since I was a kid… but being colour blind was part of why I did not do art for O levels,” Bryan said.

“I would say it held me back in terms of creativity because anything with colours is difficult,” he added.

He remembers struggling with assignments when he pursued a design course diploma in visual communication at Singapore Polytechnic.

One assignment he remembers, in particular, involved him having to recreate the colour wheel, a task he had to rely on friends for.

Coincidentally, the colour wheel was something Syahid also vividly remembers having to grapple with when he pursued a diploma in Fashion Design at LASALLE.

“Everyone around me was having fun, but I was dying,” Syahid sighs.

In some quarters of the creative world, there remains some stigma to being colour-blind, Syahid said. In fact, when he was being interviewed to study in La Salle, he did not disclose to the interviewer that he was, in fact, colour-blind.

When asked if he would do things differently if he were to apply again, Syahid says he probably would not.

“It is a very sensitive issue. I really wanted to get in, and I just think it is something you cannot tell (the interviewer),” he says.

Beautiful World, Where Are You?

For Bryan, being colour-blind is not necessarily an artistic weakness—it’s a strength.

“You know how people say that when one sense is taken away, other senses are heightened? In that way, being colour-blind has made me more sensitive to colour,” he said.

I ask him what his biggest takeaway from being colour-blind was.

“This might sound cheesy, but just treat people nicely,” Bryan said. He shares an incident that happened to him when he was 14.

When he was studying for his end-of-year exams at a McDonald’s outlet, his friends ganged up and tricked him into thinking that the grey shirt he was wearing was actually orange.

While he was initially sceptical initially, he started to seriously doubt himself when they consistently stuck to the story.

“It was the worst prank anyone has played on me,” he says, adding that the incident had robbed him of his self-confidence.

While Bryan says he sees his condition mainly as a minor inconvenience, he sometimes wishes things were different.

“When I go overseas, and there are very nice scenery, sometimes I wish I saw things differently.”

Being unable to see natural scenery is a struggle that is all too real for Syahid, who once could not see a rainbow a friend was pointing at.

“My friends said look, there is a rainbow, I looked at the sky, but I could not see a rainbow. There was nothing there,” he said.

“The sky is the worst place because the colours are constantly changing. I notice the change, but I see it differently,” he added.

Back when he was a student at La Salle, he came clean to his instructors about his condition after he faced difficulties with an assignment which required him to extract colours from a photo. It was the only time he confided in a teacher about his condition.

When he told her, she did not question or doubt him about his condition. Instead, what she told him is something Syahid says he will never forget.

“She just said, “Just pick out what you see. What you see will be different, but that is special.”