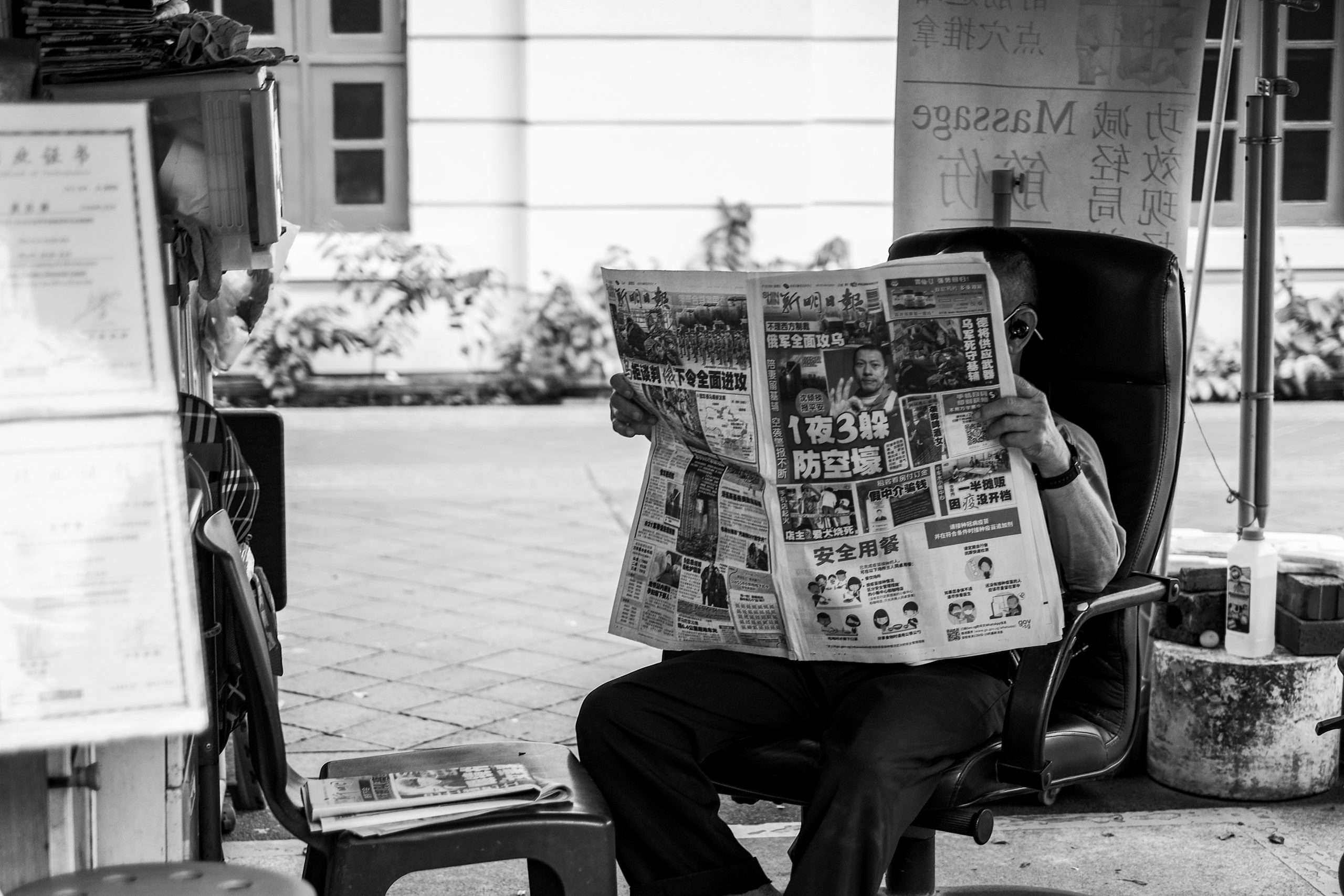 It turns out that people aren’t reading our national broadsheets. At least not as many as SPH Media claims.

On 9th January, SPH Media admitted in a Straits Times report that it had fluffed up its daily circulation numbers by between 85,000 and 95,000 (or between 10 percent to 12 percent).

Not a good look for the company housing some of Singapore’s biggest news titles across four languages.

The discrepancy was discovered in an internal review initiated in March 2022—the same month former Accenture Singapore chairman Teo Lay Lim took over as CEO of SPH Media.

Also not a good look? It took alternative news platform Wake Up, Singapore (WUSG) to break the news on 8th January before ST spilled the beans.

According to WUSG, three senior SPH Media executives will be leaving the company due to the discrepancy. Some hints on the perpetrators were dropped, claiming that they are “industry veterans” with over 50 years of experience between them.

Read All About It (or Not)

Unsatisfyingly, the Straits Times report did little to scratch the itch of the (rightfully) curious masses.

For what’s essentially the dictionary definition of fraud, you wouldn’t be able to tell from the headlines. Is it a stretch to say that the scandal was downplayed as “issues with circulation data”? Even Lee Hsien Yang weighed in, urging The Straits Times to “call a spade a spade”.

But the report did offer some insights into how the bogus circulation numbers were derived.

Lapsed contracts were included in the statistics, as were copies that were printed, counted for circulation, and then destroyed. Subscriptions were double-counted.

Some numbers were simply plucked out of thin air or, in the words of SPH Media’s spokesperson, “arbitrarily derived”. Just as an influencer’s following confers internet clout, a newspaper’s circulation numbers give it legitimacy and play a part in attracting advertising dollars.

And perhaps the most damning: Funds were funnelled into a project account in order to “purchase fictitious circulation”.

That’s all we got.

The employees responsible weren’t named, their involvement reduced to a single sentence by SPH Media’s spokesperson: “The staff involved had been taken to task, or had left the organisation.”

What makes the perfunctory explanation even more troubling is that this is undoubtedly a matter of public interest.

In December 2021, SPH Media was carved out from the mainboard-listed Singapore Press Holdings, becoming its own not-for-profit entity. It was later announced that the government would support SPH Media with up to $180 million per year for the next five years. That’s money from the Ministry of Communications and Information (MCI), mind you.

So what are the gaps that SPH Media has yet to address?

Who Are the Personnel Involved?

Some may call it a blame game, but we call it accountability. These aren’t the first misbehaving white-collar executives anywhere, and they won’t be the last. But what’s unusual is the decision to keep their identities from the public.

We’d argue that the public at large—as well as SPH Media’s readers, advertisers, employees, and Singapore Press Holdings’ shareholders—deserve to know the faces behind the fibbed figures.

Unsurprisingly, speculation has been rife. And although SPH Media’s spokesperson did not confirm if chief customer officer Eugene Wee is involved in the matter, industry publication Marketing-Interactive’s sources say he is no longer employed at the company.

Wee, previously the head of SPH Magazines, was appointed to the role in March 2021. He was tasked to oversee several audience-related divisions, including circulation, SPHRewards, and customer service.

What Exactly Does ‘Taken to Task’ Mean?

Shit has hit the fan and, unfortunately, splattered all over the room. This begs the question of how the company is going to clean up the mess.

Don’t worry! The culprits will be “taken to task”, and “steps to strengthen processes” have been taken, according to SPH Media. All fine and dandy, except for the fact that we still have no idea what any of those phrases mean.

Have the executives been fired? Dragged into a dungeon somewhere in Toa Payoh? Has their access to ST Premium been revoked?

How Long Has This Been Going On?

What we do know is that the internal review covered the period from September 2020 to March 2022. Were circulation numbers before this period inflated as well? Are there plans to examine past figures?

Not much light has been shed yet, but the issue is clearly on the government’s radar. The Ministry of Communications and Information (MCI) will launch its own probe, it told Today. The results will determine if, and how much, the government will continue funding SPH Media in the future.

Who Bought Into the Fake Numbers?

SPH is a huge legacy organisation. They’re trusted. There’s no reason for stakeholders and investors to disbelieve their circulation numbers.

But if there were people who were convinced to park their dollars due to an inflated reach, they deserve to know if they were duped or not. Right now, we don’t know if the fibbed numbers were shown to the government too.

And perhaps another question that went unanswered: Will SPH make restitutions to the affected parties who bought into it?

If it’s any consolation to advertisers, though, it turns out that the agencies they hire do indeed do the homework before sinking thousands of dollars into a newspaper ad.

Media agencies that spoke to Campaign Asia and Marketing-Interactive said that besides circulation, they also look at third-party readership data to determine ad spend.

Why Did They Inflate the Numbers in the First Place?

Reacting to the news, journalist and activist Kirsten Han quipped, “Imagine still having to fudge your figures even when you’re the only player in the local newspaper business.”

A fair point, but a 2019 Campaign Asia report painted a pretty bleak picture of the media company’s numbers. Even in an industry devoid of major competitors, SPH’s media segment saw its profits plunge 44.7 percent for the 2018/2019 financial year. While digital circulation grew by 19.3 percent, print circulation was the problem child, falling by 12.2 percent. Print ad revenue, too, was dismal, dropping by 14.9 percent.

We don’t think it’s likely that some higher-ups at SPH Media woke up one day and decided to tweak some figures for the hell of it. Was there pressure to hit certain numbers despite the rough outlook for print media? Was this an isolated incident, or is it indicative of deeper issues in how things are run at the company?

For decades, SPH Media’s titles have enjoyed a certain status as the country’s newspapers of record. That probably isn’t going to change any time soon, what with its lack of competitors and the government’s keen interest in keeping them alive.

But before the questions we raised are answered, the jury is still out on whether or not the company can redeem itself in the eyes of the public.

Amid this whole debacle, though, let’s not forget that journalists do important work. They keep the public informed, hold those in power accountable, and likely have zilch to do with communicating circulation number.

The Legacy of Legacy Media

Here’s a hot take in the face of all the flak SPH will take in the next few weeks. What if SPH just becomes a public service broadcaster like the BBC?

As a national broadcaster, the British Broadcasting Corporation operates under the United Kingdom’s Department of Digital, Culture, Media & Sport. SPH doesn’t have to be government-owned, sure, but it could also hold a special position as a statutory corporation like BBC.

With the way it’s going now, SPH might as well be a semi-statutory board of the government, with some autonomy to perform a national operational function. No longer will MCI simply have to be informed of SPH Media’s total reach and engagement by executives who can inflate numbers—they’ll have total oversight.

The matter of editorial independence is another question, though. But then again, it’ll just be one of the many queries that remain unanswered.