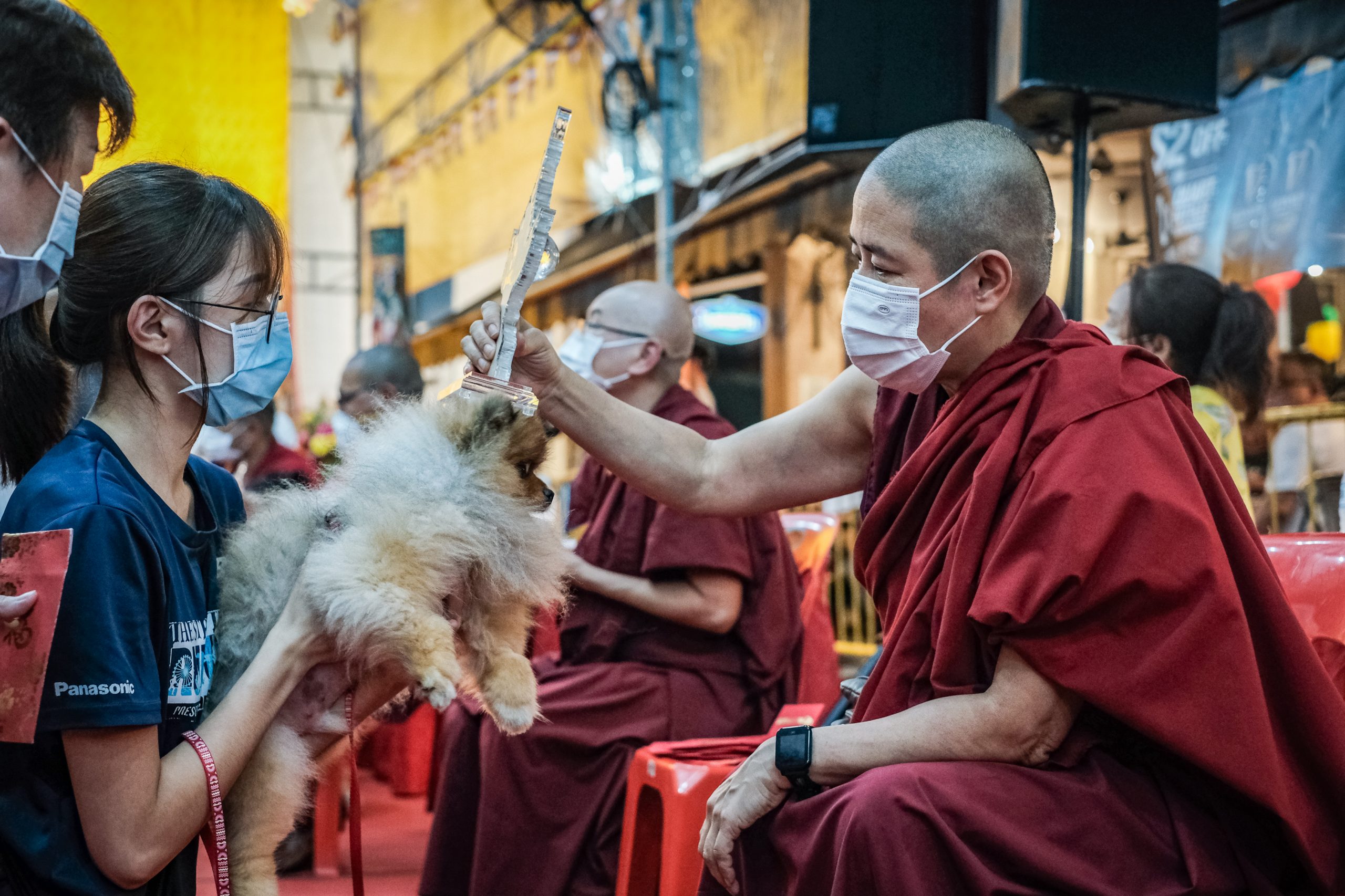 As rainfall poured throughout Vesak Day Eve, hundreds of pet owners from across Singapore joined the long queues at the temple grounds of Thekchen Choling. For the first time, the temple held an animal blessing event for pet owners to come down for prayers, light offerings, and activities like paw painting.

It was touching to witness the process of animal blessings, in which Venerables gently placed the Buddha’s relic on the heads of both the pet owners and their pets as they leaned in together, waiting for the blessing to unfold.

As pet owners engaged in simple acts of devotion by making flower and candle offerings to Buddha, their pets interacted with each other, excitedly wagging their tails and licking the hands of new strangers.

With roots embedded in Tibetan Buddhism, Thekchen Choling was founded in 2001 by Singha Namdrol Rinpoche, a Singaporean lay Lama who is the Spiritual Director of the temple. Rinpoche is an honorific term used in the Tibetan language, which translates as “precious one.”

The custodians of Thekchen Choling

“We pray to plant a seed of enlightenment for the pet because we believe that even the pet will become a Buddha one day,” Rinpoche explained.

Curious about the blessing ritual, I asked Rinpoche, “What happens after the Buddha’s relic is placed on the pet’s head?”

With a genial smile, he continued to explain, “after the Buddha’s relic is placed on the head, the good karma of the animal is activated. This facilitates the process of the rebirth of the animal.”

For many families, it is tradition to buy animals with the sole intention of liberating them on Vesak Day. However, the temple believes that the practice of animal liberation is not sustainable in the long term. Doing so may subject the released animals to natural predators or may cause harm to the ecosystem, causing ecological imbalance as a result.

In Buddhist teachings, humans and animals are viewed as equal, sentient beings capable of experiencing feelings and sensations. Perhaps that is why many Buddhists refrain from eating meat and opt to go vegetarian instead.

I spoke with Vincent Kessler, the Vesak Day organising committee chair, who has been a temple volunteer for about a decade now. Radiating with joy at the reception, he explained that part of the reason why the temple organised this event was to honour the time many individuals spent with their pets throughout the pandemic.

I was playing with Scooby’s siblings when he came up to me and leaned onto my legs. That was when I started talking to Mary and Thomas, a married couple in their mid-40s who came to the temple with their family of dogs. As Scooby shivered in fear as the thunder grew louder, Mary reassured Scooby until he calmed out.

Scooby was adopted from a dog shelter, SOSD. He is a mongrel, also known as “Singapore Special”, and is commonly considered a stray to many aspiring pet owners. He was born with a deformity on his hind leg, so in Mary’s words, he “hops around like a zombie, unable to bend it.”

Mary didn’t plan to adopt Scooby at first. But when she witnessed the looks of disgust he would get, she felt compelled to help him and provide him with a loving home.

Mary paused when I asked her why she wanted Scooby to receive a blessing.

“Bless him now so that he can have a better life,” she whispered.

Thomas, her husband, who is a Buddhist devotee, leaned in to emphasise that “Scooby will not be an animal again in his next life.” The couple fervently hopes that he will reincarnate into anything else but a dog born with a disability.

According to Buddhist principles, the concept of rebirth is crucial—it is a common belief that when a living thing dies, it will be reborn again as something else. Mary and Thomas pray that Scooby can get out of the Animal Realm in his next life.

Caught by surprise to see a pet crayfish at the temple, I stopped by to see Sherab peeking curiously at me with his feelers moving as though he was saying hi.

Li Yin, who brought her pet Sherab to the temple, is in her early 40s, works as a Business Development Manager and regularly volunteers at Thekchen Choling.

Sherab, meaning ‘wisdom’ in Tibetan, is a precious gift from her religious teacher’s son. Sherab has been a steadfast companion beside her work desk throughout the pandemic.

Li Yin explained how Buddhists believe it can be difficult for an animal to be reborn into a higher realm “unless us pet owners bring them here to offer them a higher rebirth.”

“They cannot do it on their own, so we are here to help facilitate that process.”

Li Yin wanted to bless Sherab on his behalf, helping him gain merits and create a cause for him to return as a human being.

Li Yin confessed that Sherab was originally a gift and that she was not initially ready to take care of him. But after getting used to having him around every day, she felt a growing connection that compelled her to keep him.

“I think many people prefer furry pets because they can immediately respond to you,” Li Yin continued. “Of course, when compared to them, pets like crayfish are not as responsive. However, Sherab is unique because I can call him out when he’s hiding in nooks and crannies in the tank. Sometimes when I tap on the glass tank, he comes out and responds to me.”

“I also like to see him climb trees, eat food with his little hands,” she continued. “I have placed climbing structures, holes, and plants in there because I notice that Sherab likes to cling onto them and hide amongst the holes. This chap likes to dig below things, and he likes to play hide-and-seek.”

I saw Sean carry a blue Adidas shoebox around, only to discover that it was a makeshift litter box for his pet hamster, Truffles, who was tucked cosily inside. While 24-year-old Sean is not a Buddhist, he came to the temple with an open mind to pray for the good health of his pet.

Sean told me that he once had two hamsters—Truffles, and her partner, Creamy, who passed away after escaping from their cage. Truffles had also escaped once and got stuck behind Sean’s fridge for a week, but luckily managed to survive thanks to the food reserves in her cheeks.

This nerve-racking incident has made Sean more mindful in terms of creating more pet-safe places in his house, for instance, by sealing up the sides of the fridge to prevent Truffles from being trapped there again.

Reflecting on his relationship with Truffles over the last two years, he commented, “I am so lucky that she’s still very active, and I want her to stay this way. She can be very passive during her estrus cycle. It’s a hamster kind of period, where instead of blood, they will release a discharge that is white in colour.”

“Truffles adds liveliness at home,” Sean said. “With Creamy gone, I now treasure Truffles more than before. It’s like… at least I still have the other half with me.”

Celebrating the sanctity of life this Vesak Day

Contrary to the usual tranquil scene you would expect in a temple, Thekchen Choling buzzed with animal and human interactions. It was undoubtedly a sanctuary for pets, where they were able to meet and make new friends and spend meaningful time with their owners.

With Thekchen Choling’s animal blessing practices of treating animals and humans equally as sentient beings, I am reminded of Singha Namdrol Rinpoche’s words to many pet owners who have received blessings from him.

More photos from the event: 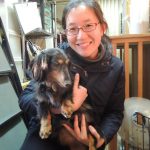 I thrive on human connection and important conversations that concern humanity and the human condition. In my stories, I hope to capture the essence of relationships across cultures and borders.