Unpacking Gender Roles With My Ma, a First-Time Store Owner at 48 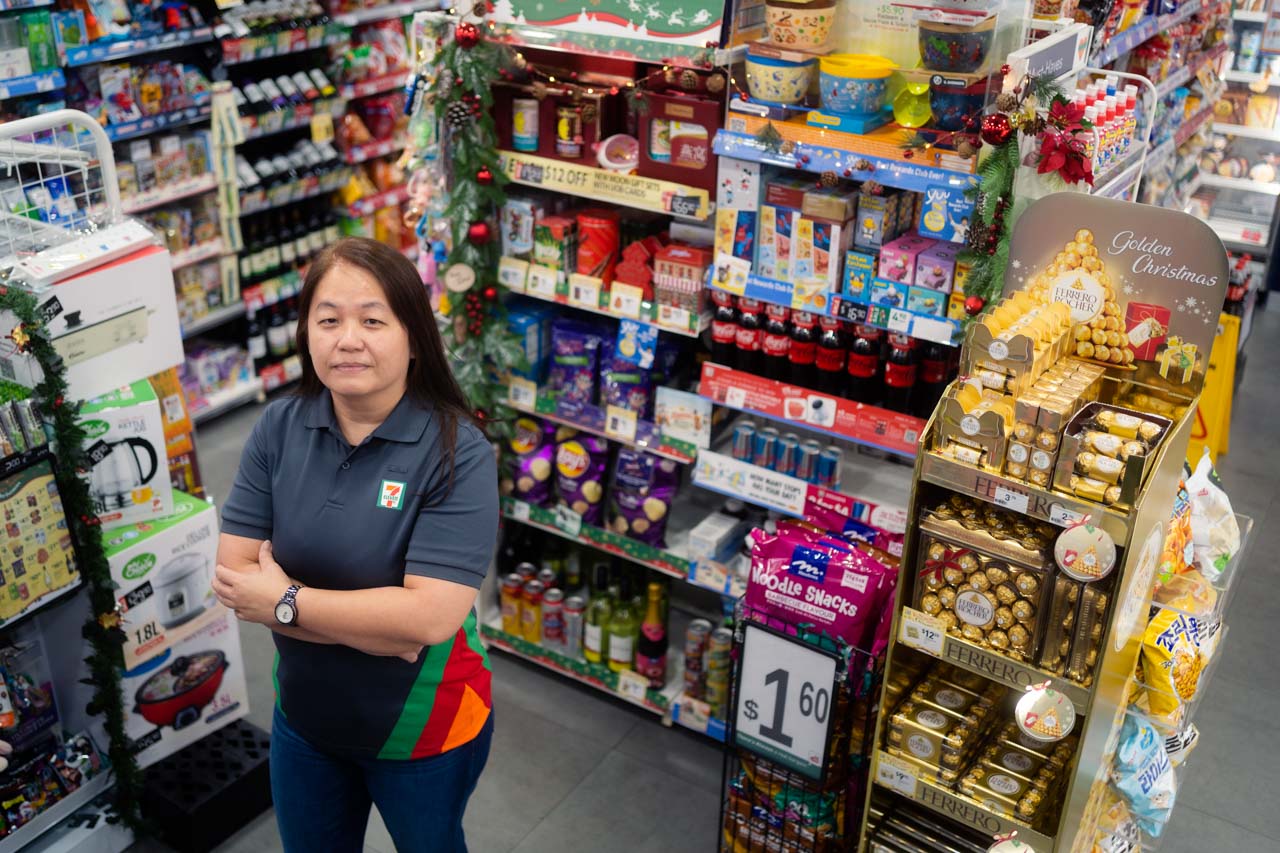 All images by Stephanie Lee.

In a recent chat with my Gen X mother, Jesley Kee, I struggled to remember the appropriate term to describe the state of unfairness in having different expectations for women and men. “Do you mean gender discrimination?” she chimed in casually. I was surprised. I never expected Ma to know or understand what that term meant.

The conversation made me realise that Ma’s mindset, along with her career, had changed. And after more than 20 years of homemaking, she is now a 7-11 store owner at 48 years old.

Once a firm and almost loyal subscriber to traditional gender roles and beliefs, Ma is now a changed woman.

“I never saw it coming either. I have always expected to be a housewife for the rest of my life. But after owning this convenience store, I will always encourage women to be more independent and earn their own keep instead of just relying on the husband.”

Ma’s 7-11 store is right across the street from Yishun Safra. The night I dropped by for this interview, she was pulling out boxes of chocolates to restock an almost empty shelf.

I wanted to know if Ma had any brush with gender differences in the earlier years of her life. Ma tells me that she could not recall any jarring memories of prejudices or discrimination against her as a female. In fact, she felt that she enjoyed special treatment from her parents and older siblings because she was the youngest in the family.

Ma grew up in a small Malaysian town, Batu Pahat, with two older sisters and four older brothers. Like her now, my grandparents also made a living by operating a mama shop (their generation’s version of a convenience store). It became an eatery after they had some success selling home-cooked meals.

Ma described labour for the family business and at home as a natural duty of every family member, male or female.

“If there’s a need, and someone sees it, they will fulfil it. We were all brought up that way. Even for traditionally feminine roles like cooking, it was something I enjoyed rather than a tedious chore. When I was younger, I always liked to help my mum cook after school.”

Chocolates duly restocked, Ma went on to open a set of ready-cooked Biryani for a late dinner. After placing it into the microwave, she continued to reveal more of her family life.

It slowly became evident that though she did not have a direct brush with gender discrimination as a young girl, she had undoubtedly witnessed how others were affected by it.

She tells me that although everyone in her family chipped in to help with the family business and household chores, expectations for her older sisters to do so were higher than that for her brothers.

At that time, it was natural to support and encourage men in the family to go out and embark on their chosen career paths. The same cannot be said for her second-oldest sister. Ma recalled that her sister was met with strong opposition from their mother when she wanted to venture into hairdressing.

That anecdote reminded me that it was less than 100 years ago when it became a norm for women to have access to education and jobs. Sadly, outdated stereotypes of gender roles still perpetuate today’s society.

“I think it was intuitive for your granny to want the girls to stay home and oversee the household and family business. It was what she was brought up to believe,” Ma explained as she carefully removed her meal from the microwave.

The Roles She Played

Ma met my dad, Miew, when she was in Johor studying for her diploma in Business Administration. After marrying Ma and finishing his university studies, Pa flew off to China in alternate months to work as an engineer. Ma decided to move to Singapore to work office jobs.

In their first few years of marriage, Ma and Pa became Singapore Permanent Residents, bought a home in Singapore, and had their first two children. Ma eventually quit her job to take care of my siblings and me. At the same time, Pa finished his projects in China and alternated between Singapore and Malaysia weekly to help his father in a new business venture.

“I was okay with being a housewife because he was earning good money. I could afford to stay home and take good care of you and your brother.”

Yet, she maintained that she had always wanted to do something more than homemaking, be it through a job or a business. When the kids were older, Ma decided to get another office job.

But it wasn’t easy for her. She had to wake up early to send my siblings to childcare centres before work and then rushed to bring them home after. The dual labour of a corporate endeavour and childcare took a toll on Ma. When Pa found another well-paying full-time job, she returned to homemaking.

For most of her remaining years as a housewife, she spent her free time at home, sewing and baking while her children were at school or asleep.

Pa was a fervent supporter of Ma’s hobbies. He even bought her a high-quality Brother sewing machine which led her to start a small business selling her hand-sewn pieces. Ma also sold baked goods and made friends with various customers on Facebook.

Ma would go on to gain practical life skills such as tenacity and effective communication, which would greatly help her later in her life as a franchisee. But, for the most part, she was shielded from the harsh realities of sexism that women like myself face daily.

She did not, for instance, know how it felt to be questioned for her ability to do a job or what it was like to be talked down to because of her gender.

The rose-coloured lens from which she viewed life would only take on a different shade after she stepped back into the workforce many years later.

When Ma became a convenience store owner, she was plunged into a new world of challenges. COVID-19 happened, and Pa, the family’s breadwinner, was retrenched like many others.

While looking for another job, Pa had the idea of getting a 7-11 franchise store as an alternative income stream. Since he was still receiving job offers for a few high-paying engineering projects, Ma volunteered to support him as the leading franchisee so Pa could freely accept new work propositions.

“There were some customers who were very hard to deal with, but there were also very lovely people with whom I made friends. Some of the aunties even bought meals for me.

It helped that the supervisor who trained her, Mugun, was also very nice. “He was very patient, so it was easy to learn from him.”

Ma mentioned that the social skills she picked up from selling her handmade goods as a housewife helped her serve patrons well—and it shows. She greets regular customers warmly and easily starts conversations with new faces.

With the support of friendly customers and her training supervisor, Mugun, Ma managed to tide her through the discomfort of the initial training period.

However she tells me that that was not the most daunting chapter of the journey; she felt the most concerned when it ended and the time to oversee the store by herself loomed. Ma still encountered customers and internal contractors who were challenging to work with, but now she had to face them alone.

Drawing Boundaries and Speaking Up

She tells me of patrons who spoke to her in a condescending and rude tone, even though she had been courteous and did nothing for them to behave that way. Sometimes, it even toed the line of verbal abuse when they raised their voices against her.

Ma was also intimidated by internal contractors who oversaw the utilities of the store and delivered supplies. Her secret to managing them was to adopt a confident personality with a strong and clear voice so they could see her as someone worthy to be followed and heard.

When asked if she felt those challenges would be different for a male, she nodded with a resounding yes.

“If I was a man, would those customers and workers have dared to speak to me that way? I don’t think so,” Ma tells me. “When they found out I’m the owner, their tone and attitude also changed.”

“Then, when they see me as something more, their thoughts change to become, ‘Oh, now I have to respect this person.'”

Things got a lot easier after she resolved to be adaptable and assertive. Ma learnt to draw boundaries and spoke up whenever she felt that she was being unfairly treated. She believes that certain people had to be called out for them to become aware of their unacceptable behaviour.

“But some of them would become indignant and insist on acting that way. But that’s okay because at least I stood my ground.”

The Less You Know

Most of us are highly resistant to change, but Ma freely embraced it. Today, she thrives despite meeting churlish characters and has won many with her affable persona. Her latest success includes clinching the most Yuu mobile application downloads in her district for consecutive weeks.

But Ma’s journey is more than just a story of inspiration. It is a reminder that the existence of social issues, like poverty, racism, or gender inequality, is not dependent on one’s personal experiences.

She is the perfect example that one’s privileged lack of exposure to an issue does not nullify that these are real problems that real people face.

Alas, the initial unfamiliarity with gender discrimination is not unique to Ma. A recent survey by YouGov found that older women were less likely to agree that gender disparity exists only because they have fewer workplace interactions. If not for Ma’s newfound experiences and willingness to learn, she might have, like many others, gone her whole life agreeing that gender inequality is but a myth too.

Ma’s journey from a traditional homemaker to a successful convenience store owner is a powerful reminder of the importance of breaking the status quo and challenging traditional gender roles.

Her experience proves that women, regardless of age or background, are just as capable and deserving of pursuing their own careers and financial independence.

My siblings and I never doubted Ma. Even before she started working as a 7-11 franchisee, Ma has always been great with people. Her social skills were good too. Case in point: Whenever we travelled, she was always the one planning the itinerary, and if we got lost, she knew how to get help from strangers.

More importantly, Ma has shown that by encouraging women to be independent and earn their own keep, we can work towards a more equal and fair society where everyone can achieve their full potential. Her story is a timely reminder that it is never too late to challenge societal expectations and pursue one’s own path in life—one 7-11 store at a time.