What, Exactly, Does A Union Leader Do? 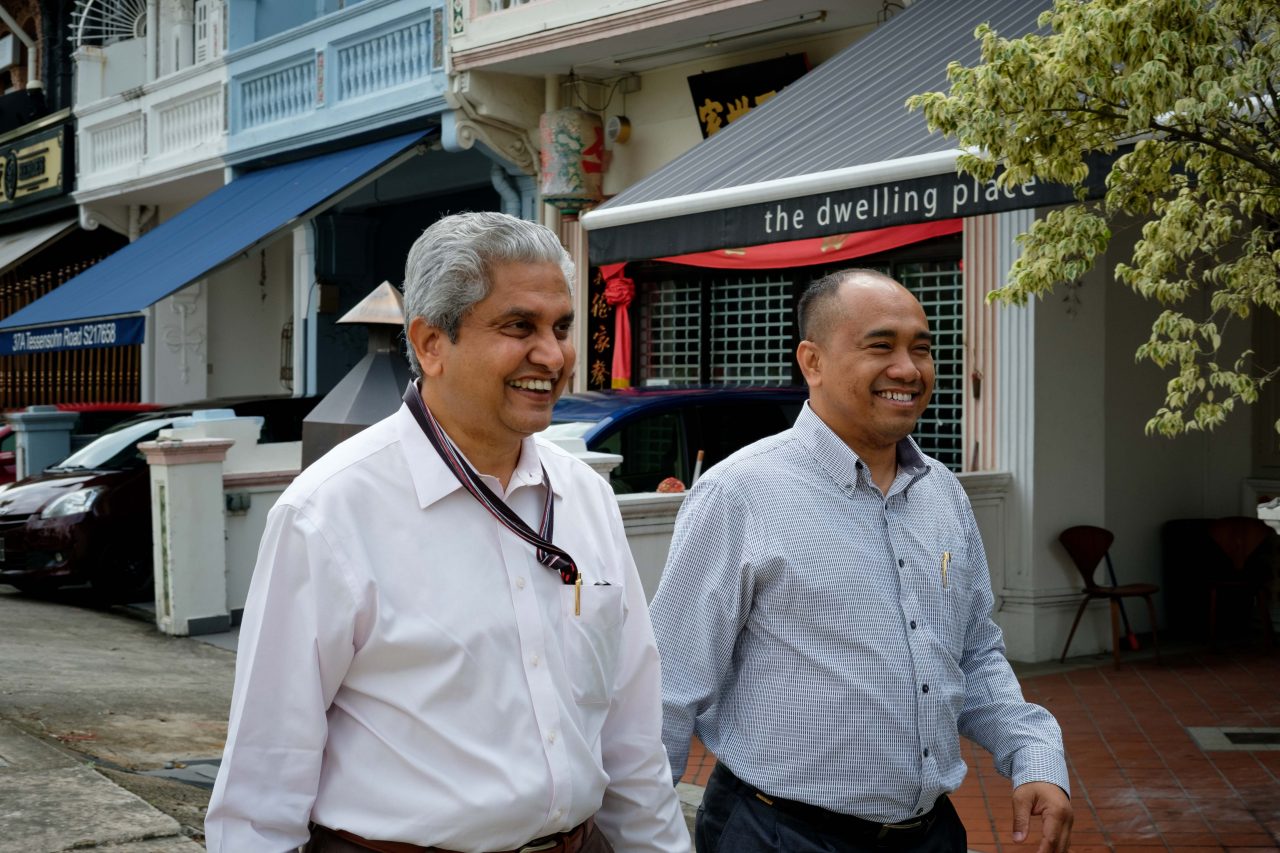 Four years ago, K. Karthikeyan was driving in Jurong Island when two trailers came speeding towards him at over 100 km/h. Although he was only going at around 30 km/h, he says that everything happened so fast. Before he knew it, he had crashed into one of the trailers, and the entire front portion of his car was decimated.

Stepping out of the vehicle, he didn’t realise that he had sustained 11 broken ribs and a burst bladder. But after feeling “a bit weird”, he decided to call the ambulance. It took 45 minutes to arrive.

Shortly after, when he was warded in the ICU, then Minister for Environment and Water Resources Vivian Balakrishnan paid him a visit. From his bed, Karthi asked, “I heard that in the bible, God took one of Adam’s ribs to make Eve, that’s why men only have 23 ribs. Can you ask your brother if that’s true?”

The minister allegedly laughed and brushed aside the question, before proceeding to talk about why airbags don’t necessarily make a car safer.

Afterwards, the management of one of the companies whose workers are members of the United Workers of Petroleum Industry (UWPI), the union at which Karthikeyan is General Secretary, dropped by. From his hospital bed, Karthi arranged a meeting to sort out a grievance a union member had raised with him.

In response, he was told, “You in ICU already still want to work ah?”

Brother Karthi, as everyone calls him, is 58 this year. With a full head of silver and a disarming smile, he stands out almost everywhere he goes.

When I arrive at NTUC’s headquarters for one of our meetings, I wander accidentally into a room where Halimah Yacob is hosting a reception just after being named Singapore’s first female President. As I’m accosted by two men in white shirts who demand to know who I am, Karthi appears out of nowhere, and intervenes.

Much like many of the other union leaders I’ve met, this is the kind of presence that Karthi exudes—no matter who you are or where you’re from, he makes you feel like he has your back.

Even then, being a union leader is not about blindly taking the side of union members.

He tells me early on: “If you have made a mistake and you come to me for help, don’t expect me to help you. If you want to change, then maybe I can do something. If not, I’ll tell you to go and look for another job.”

He then proceeds to share about workers who would leave their posts while refuelling aircraft. In the past, locking mechanisms didn’t exist, and you had to be physically present to ensure the refuelling nozzle stayed in place. And then there are those who would smoke while on shift in petroleum refineries.

“How can you expect me to help these people?” Karthi asks.

Unlike other countries where unions are often perceived as “militant” organisations that are only ever organising strikes, Singapore’s unions function more like outsourced HR. It’s a delicate balance where they champion workers’ rights, but also look out for the interests of companies.

After all, when it comes down to it, workers still need their jobs. And helping companies do well ensures this.

Karthi recalls an episode long ago when a company required its staff to sit for a test before being allowed to be promoted to senior technicians. Many workers refused, using their union membership as grounds for objection.

In contrast, Karthi argued, “What do you have to lose by doing the test? It’s everything you’re supposed to know anyway if you’re going to be a senior tech! If you can’t pass it you shouldn’t be promoted in the first place.”

Some union members left over their disagreement with this approach, but it made companies more willing to work with Karthi because they saw that he understood the bigger picture.

This isn’t to say that there aren’t instances when companies do try to take advantage of their workers.

Fully competent older workers in managerial roles, for instance, have seen themselves being shuffled into less relevant positions or being subjected to unfair performance appraisals to make way for younger blood. And then there are more mundane issues, such as when new equipment meant to increase productivity ends up creating more work, or turns into surveillance tools for management to keep watch over employees.

If a union wants, it can serve a notice to the management of the company, which legally obliges them to show up for a meeting to discuss workers’ issues. If a company still refuses, then the issue can be brought before the Ministry of Manpower (MOM)—usually a last resort.

Generally speaking, Karthi says, “Usually an email will do.”

It helps when they keep it informal, and he tells me a story when MOM was involved because a company refused to replace the Coffee-Mate in its pantries with condensed milk. The workers’ concern at the time was that the Coffee-Mate contained  chemical ingredients. But management would not budge on the issue.

“And so the issue was escalated to the ministry.”

Ever since the Industrial Relations Act (IRA) was introduced in 1968 to clearly define the management rights of employers over employees, trade unions have been able to negotiate for everything from medical benefits to holiday subsidies.

At its simplest level, this takes the form of a Collective Agreement (CA), which is meant to protect workers and ensure they are covered for basic obligations like adequate rest days and retrenchment benefits.

Karthi only found out about all this in 1986 in the midst of Singapore’s first post-independence recession. He and his colleagues had been told that everyone’s bonus increment would be frozen that year, and he tells me, “Back then nobody wanted to ask why so I went straight to the MD’s office and I asked why.”

After being told that as per the IRA, only unions have the legal power to demand answers, he formed the Singapore Petrochemical Complex Employees Union. In 1988, when he started doing union work full-time, he was able to fight for that year’s bonuses while also getting it backdated to 1986.

That, he says, was when he realised how many workers appreciate the work that unions do.

Since then, Karthi has passed over many higher paying job offers to continue being the General Secretary of UWPI. UWPI has over 30 branches (each company forms one branch), and each branch has its own union leaders. When I sit in during one of his meetings with both leaders and workers, I finally understand why not everyone can do the work he does.

Regardless of how heated a discussion, Karthi is always calm and good-humoured. He has a reputation for “talking a lot”, but I also notice that there is a method to his occasional long-windedness.

It’s clear that Karthi doesn’t just want to solve problems for people. He also wants them to understand how things work. So he might go back to the 70s or the 90s to explain why a certain policy change was made, all just to explain why a worker can’t insist on claiming a certain subsidy.

In addition, a lot of the things that Karthi ends up being asked are basically the same thing in different forms. However, I also realise that this is what workers need. More than just answers, they are looking for reassurance.

That day, Karthi was meeting a handful of workers in their 50s who had just been told that they would be retrenched early next year. For guys in their position, Karthi isn’t just a mediator anymore. He’s also a friend and a counsellor.

Karthi is halfway through his current term as General Secretary of UWPI, and because the flow-on age (aka retirement age) for unionists is 62, this might also be his last.

At the same time, he isn’t worried. He rattles off a list of courses that he’s attended at the Ong Teng Cheong Labour Leadership Institute (OTCi), and tells me that he’s qualified to do everything from selling insurance and property to being a lecturer (something he’s done for years).

“I think if OTCi got a hundred courses then I’ve attended all hundred,” he says with a chuckle.

Yet it’s also obvious that a guy like him will surely be missed. A few years ago, during an OPEC cluster meeting with union leaders that was chaired by Karthi, an Economic Development Board (EDB) representative presented the outlook for the oil and gas sector, and mentioned a skills scheme about to be launched by a particular company.

This caught the union leaders off-guard as this was the first time they were hearing of this, and it became awkward when one union leader said that both EDB and companies shouldn’t leave unions out of such decisions.

Karthi was able to defuse the situation, and since then, together with NTUC, he has facilitated more of such sharing sessions that demonstrate the spirit of tripartism.

So whenever Industry Transformation Maps (ITMs) are launched, union leaders can now communicate these strategies to workers. Amongst other things, this prepares them for the arrival of new technologies or for shifts that will require training for new skills. In some cases, it might even prepare the industry for approaching retrenchment.

For many industries, including oil, gas, petrochemicals, and manufacturing, all of which make up a significant portion of Singapore’s GDP, unions play a crucial role in ensuring workers are treated fairly.

Unions might sometimes be perceived to be spending a lot of time organising Dinner & Dances and bowling or futsal games, but behind the scenes, unionists are constantly working to ensure that Singapore’s working people get better jobs, better pay, and better lives.

When I ask Karthi if he will ever miss union work if he has to stop, he says, “Of course.”

Then he adds, “But it’s okay, I can do anything because I keep learning. This is what I tell my union members all the time: never stop learning.”

To make a point about how every job is dignified regardless of what others think, he adds: “I’ve even driven a taxi before—so I might just do that.”