Chinese Nasi Lemak Vs. Malay Nasi Lemak. Which is Better? 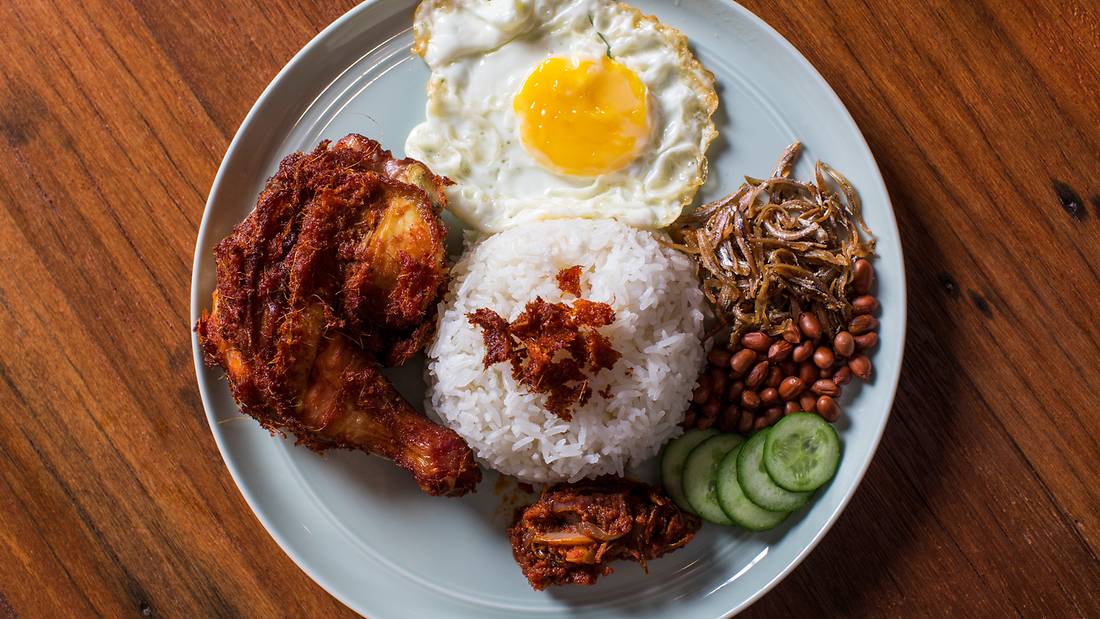 “Eh stop it ah, y’all Chinese already take Geylang Bazaar from us, please leave Nasi Lemak alone,” My Malay friend gesticulated in my face as I suggested to him that Chinese Nasi lemak was better than Malay Nasi Lemak.

At the time, I thought to myself: does it really matter who makes a better version of the dish? It’s still Singaporean food at the end of the day; not as if the dish has changed so radically to the point where it has become cultural appropriation.

Besides, so long as both versions of the dish are done masterfully and I enjoy the meal, should I care?

Even so, this conversation led me to realise that I had no idea what the differences between the Malay and Chinese versions of Nasi Lemak were, and which one was definitively better.

I only had the distinct memory of being underwhelmed by the tiny portions of eggs you would find in Malay banana leaf Nasi Lemak. I have had crepes thicker than those omelettes.

In comparison, Chinese Nasi Lemak is undeniably the more decadent of the two. Many of the dishes on offer, such as luncheon meat and ngoh hiangs, are deep-fried as it is much simpler to prepare. Even the eggs are fried en masse, which often results in a hard yolk and a white that drips with oil.

After 25 years of living in Singapore, I still had zero idea which kind of Nasi Lemak was better.

Thus, with all this in mind, I set off on a taste test.

Coconut Club apologists, this is not the article for you.

For Malay Nasi Lemak, I go to Selera Rasa at Adam Road Food Centre. It is often touted as the gold standard of Nasi Lemak in Singapore as it uses the trademark long-grain basmati rice. They are known to sell out before closing hours and going there in hopes of securing a plate of Nasi Lemak during lunchtime on a weekend would be riskier than selling drugs in Manila.

For Chinese Nasi Lemak, I head to the Jalan Besar branch of Ponggol Nasi Lemak, which is the newest branch in a franchise that has been selling Nasi Lemak since 1979. The original branch in Upper Serangoon is a hit with locals, and often has queues that extend to the exterior of the shop, with customers just waiting to sink their teeth into the signature fried chicken drumsticks.

Normally, I would add additional ingredients to the basic Nasi Lemak set, but to give a fair review of both establishments, I ordered the same menu items.

The first thing I notice the minute I lay my eyes on the plate is the fact that there are no peanuts in the Ikan Bilis. On top of that, I find it to be a little too salty for my liking.

I scoop a mouthful of rice and top it off with some of the sambal and ikan bilis.

It would be extremely cheesy to say that I experience an epiphany, but it wouldn’t be that far off from the truth either.

The long-grain basmati rice, which is also usually found in dishes like Nasi Biryani, gives the dish a much lighter feel. Each grain is thin and fluffy, which allows the coconut to permeate and sets up a strong foundation for the dish.

My initial gripe about the ikan bilis being too salty is instantly thrown out the window. When eaten with the sambal, which is rich and a little bit on the sweet side, it caramelises in your mouth and triggers an explosion of flavours. It gets a little intense, but the coconut rice is the perfect buffer to even things out.

I like my chicken wings to be crispy and flavourful, and this is where the Nasi Lemak at Selera Rasa lets me down.

The batter, while light, makes the chicken wing a little too crunchy for my liking. It’s almost as if they had put plastic in the batter to make it crunchier like the keropok lekor at the Geylang Bazaar (I kid).

The meat was underwhelming and tasted one-dimensional, borrowing its flavour from the batter, which was mainly tumeric-based. Not to mention the fact that it was dry, although that could have been due to me coming after the lunch crowd had dissipated.

The fried chicken wing is the star of the show at Ponggol Nasi Lemak. The marinade is made up of a mixture of several spices that give the well-seasoned meat a depth that was missing in the chicken at Selera Rasa. The skin is flavourful and just the right amount of crispiness.

At Ponggol Nasi Lemak, they pride themselves for using freshly-squeezed coconut juice to cook the rice with, and it shows. Exhale through your nose while munching on the starchy rice and you will drown in the fragrance of the coconut, which is almost creamy at times.

The ikan bilis here features the peanut and is showered with a generous serving of sugar. It is clear that like Selera Rasa, the complementing of flavours is something that a lot of thought has been put into.

As the ikan bilis is sweet, the sambal is more savoury and is not as indulgent as its counterpart at Selera Rasa.

The combination of flavours is not nearly as exciting as Selera Rasa’s offerings, but all in all still an extremely enjoyable meal overall.

While the Nasi Lemak is more “Lemak” at Ponggol, its decadence came at a cost as I found myself looking for a hot cup of tea to wash down the oil from the meal. It felt like I had downed an entire bucket of fried chicken. Despite this, it was the more satisfying meal of the two.

Malay Nasi Lemak, on the other hand, is genre-defining and should always be the go-to for people who are looking for the authentic Nasi Lemak experience, which is eating a plate of light and fluffy coconut rice that helps to balance the palate when it is eaten alongside the sambal and ikan bilis. There is a reason why the dish was voted as one of the healthiest breakfast foods in the world.

There is also an argument to be made about the authenticity that Chinese Nasi Lemak can never achieve, and I think that most of it can be attributed to the cultural heritage.

When I go to R.K House at Serangoon Gardens for a midnight fix of Kway Teow Beehoon Goreng, my experience is always slightly marred by the fact that the restaurant is always filled to the brim with Chinese people. It almost seems like the place has lost part of its soul.

People worldwide associate fried chicken with Colonel Harland Sanders and KFC despite everyone knowing that it was African Americans who were the OGs of fried chicken. It is only because Mr Sanders found a way to capitalise on his recipe that he has become the godfather of the fried poultry dish.

As much as I love Chinese Nasi Lemak, I would hate it if Ponggol Nasi Lemak became a worldwide franchise, only for people around the world to think that it was a Chinese dish.

For that reason alone, I believe that Malay Nasi Lemak will always be the definitive version of the dish.

“I will never enjoy Chinese Nasi Lemak just like how Chinese people will never like Malay Hor Fun,” my friend capped off his argument.

That made sense to me.

After all, I’ve had Singapore Fried Noodles in Caucasian countries that taste better than the Hokkien Mee you would get in Malay stalls.

But of course, that’s just my opinion.

Which do you prefer: Chinese Nasi Lemak or Malay Nasi Lemak? Is this even a conversation worth having? Tell us at community@ricemedia.co.
Share to
Related Articles