“Find the right shade for your skin tone.”

This was arguably the most important piece of advice I received from a blonde beauty guru on YouTube 2 years ago when I was just getting into makeup.

“Know your skin’s undertones,” she said, speaking into the camera. “Choose a shade that matches with the rest of your body and most importantly, your neck.”

“After that, just blend. Blend until your fingers fall off. Hairline, ears, everything.”

The blending part was easy. Finding the right foundation shade that didn’t make me look like a clown, not so much.

First world problems, really. But I should be so lucky; not every girl gets to share this same predicament.

“Usually when I try makeup, I’ll go straight for the darkest shade. And sometimes, even the darkest colour is too light for me. I usually won’t even bother with the second lightest colour or anything,” says 23 year-old Nikita, who’s both Indian and a makeup lover.

At present, Nikita alternates between the darkest and 2nd darkest colours of Sephora’s brand of foundation. “It’s worrying because for people even darker than I am, and I know some of my friends are, what are they going to use? Sephora already carries some of the darkest shades.”

It’s no secret that the cosmetics industry has been slow to embrace all skin tones.

In an industry where light (read: white) is a default colour, Western publications have taken to questioning the industry’s stunted growth, calling for greater inclusiveness for women of colour.

Yet while there have been increased efforts to cater to deeper skin tones from makeup giants Estee Lauder (Bobbi Brown, Clinique, M.A.C etc.) and L’Oreal (Maybelline, NYX, Lancome etc.), and even smaller online brands such as Colourpop, Singaporean retailers have been slow to follow suit.

For instance, the US version of Maybelline’s popular Fit Me! Foundation comes in 40 shades, from Fair Porcelain to Espresso. Of the 40, 17 cater specifically to deeper skin tones. The same foundation in Singapore is available only in 10 shades, from Ivory (fair) to Sun Beige (slightly tanned).

The same goes for L’Oreal’s cult favourite True Match Liquid Foundation, available in 33 shades in the US but only 8 in Singapore. The list goes on.

It’s a problem that predominantly surfaces in pharmacies such as Watsons and Guardian, with only the most common (again read: fair) colours being stocked.

“Their makeup range isn’t diverse enough. They do stock from light to dark but it’s usually only one or two ‘darker’ tones. It’s not enough,” says popular Instagram personality Trishna Goklani who also happens to be Indian.

“I’m usually picking between either a lighter brown or the darker brown. There’s not enough variety and that’s a big problem.”

In Singapore, the only way (so far) to overcome this lack of variety is to pay more. Since Watsons and Guardian don’t provide nearly enough shades as they should, Sephora has become the go-to for many girls.

“There’s a wider variety of brands and caters to a more diverse range of skintones,” says Sofilia Bte Zaidee, 21, and an avid shopper at Sephora. “The downside is that it’s also more expensive”.

The average price of a bottle of foundation at Sephora is about $60, twice the price of similar products sold at Watsons or Guardian.

But it’s not just about paying more. Accessibility is a key issue as well.

“It’s frustrating because I want to be able to casually go to the Guardian across my place with my friends to replace my concealer when it’s finished. But I know I’ll never be able to find a good match unless I go to Sephora,” she adds.

Compared to the hundreds of stores owned by Watsons and Guardian that can be found in virtually every shopping centre, Sephora’s 11 outlets can seem inadequate.

Trishna is a firm believer that “everyone, regardless of skin colour, deserves an equal chance to be able to purchase makeup that actually sits right on their face”.

“Why can’t I have the same rights as the girl next to me [who has] the luxury of having options?”

One option is actually to just go without.

“Initially, I just chose not to wear any foundation because of how difficult it was to find a shade,” says Trishna. “This is something I realised most girls like me were doing. Just not wearing a base at all.”

And it’s not just foundation that gets passed on. The same applies to certain shades of lipsticks, highlighters and bronzers.

“If I do, I have to use a damn bright colour for it to show on my skin. But then it ends up looking like it’s too much and not natural or casual at all. So I only use it on special occasions. I can’t wear it everyday like how others with lighter skin tones can.”

For Sofilia, it’s eyeshadow she avoids: “I would love to do a nude eyeshadow look. Unfortunately, nude shadows on the market are meant for lighter skinned people and don’t work for me.”

With over 20% of our population consisting of Malay or Indian people, one has to wonder why our makeup stores don’t seem to keep pace with demand.

“I notice that it’s always a Korean or East Asian looking model in the advertisements,” says Aditi, 25, a self-proclaimed dark-skinned Indian. “Rarely is it a ‘dark’ skinned woman. It irks me loads because she’s usually like the fairest Indian ever. It gets tiring and I think it does subconsciously take a toll.”

Sofilia echoes Aditi’s sentiments, “We often turn a blind eye to the fact that minority races would want to see how makeup looks like on their skin tone before buying it.”

“You see products being marketed as made to match Asian skin, and you go there and they turn out to have 4 shades that are extremely light. It’s sad.”

Jezebel says that this lack of diversity is historically and culturally rooted. In Style and Status: Selling Beauty to African American Women, 1920-1975, Susannah Walker states that “Advertisers, at the time, did not see black people as affluent enough to warrant special advertising attention or sophisticated enough to respond to product marketing.”

Sadly such mindsets have persisted, even in Singapore.

In stores, I can’t help but notice the overwhelming amount of fair shades on display and the darker foundations (when there are any), tucked away at the back. Despite Sephora’s more diverse offerings, I still see that it’s usually girls with lighter skin tones that dominate their Instagram page.

Makeup, while often deemed unnecessary and frivolous, still manages to hold up a pretty clear mirror to society’s lack of inclusiveness. Surely for a multiracial nation, we can do better. 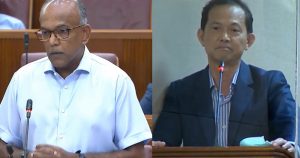 How We Must Redefine ‘Racial Harmony’ for Singapore in 2021

All images from Rice File Photos unless otherwise stated. No one can seem to agree on what exactly racial harmony is. Or at least, what Singapore wants it to be.  Online discourse over the past few months has been a massive feedback loop of disenfranchisement. The recent spike in COVID-19 cases and