When Does Self-Deprecation Turn Into Humble-Bragging? An Analysis If I had a dollar for every attempt at a self-deprecating caption I’ve seen on social media, I would have enough money to take holidays every month.

For instance, “Perpetual RBF unless I’m with my one true love: pizza”, or “Dreaming of the next time I get to take a nap”. If I didn’t know better, I’d believe there was a manual for the most common lines to use or sentiments to exploit.

But self-deprecation isn’t reserved for selfies; we’ve also come to adopt the tone whenever we want to inform the world of something that has gone positively in our lives, like good results or a significant career milestone, yet don’t want to appear like we’re showing off.

From what I’ve gleaned, this ‘trend’ of self-deprecation stems from our obsession with relatability, where it’s seemingly cool to ‘fit in’ by way of being ‘chill’. So we downplay our achievements or the things we like about ourselves.

Celebrities, for instance, constantly inject self-deprecating humour into their social media updates to appear accessible. They might quip that they’re hopeless with fashion outside of a red carpet event.

Along the same vein, successful Netflix TV shows like BoJack Horseman and Big Mouth feature characters who are acutely aware of their own flaws. This is played up through the use of sardonic humour, where characters take frequent jibes at themselves, whether it’s acknowledging depression through self-loathing or plainly displaying the mess of adolescence.

Self-deprecation has since made its way into our personal lexicon.

For one, the popular term ‘adulting’ carries an implicit layer of self-deprecation. It seems to suggest it’s humorous that 20-something-year-olds are incapable of basic tasks like paying bills or getting out of bed. When we actually do accomplish them, we call it adulting, and not the basic responsibility of being a human person, thereby turning otherwise trivial tasks into a big deal.

‘Adulting’ is self-deprecating precisely because the term is often more layered than it appears. Many millennials use the term ironically, as a way to laugh at the miserable state of our lives caused by the broader cultural context of an expensive housing market, student loans, and the perpetually frustrating attempt to balance money and passion.

Like anyone with a sense of humour, I enjoy a healthy dose of self-deprecation as both spectator and performer. When executed right, it can be witty, unexpected, and endearing. It reveals a depth to someone’s character and how much they understand themselves, making them even more attractive.

Unfortunately, when self-deprecation falls flat, it becomes cringe-worthy, try-hard, and disingenuous. It might also reveal a desire to appear witty and chill, just because this seems to be the ‘trend’.

If I were to receive a dollar for every legitimately funny self-deprecating caption I’ve seen, I would barely have enough for one cab ride.

Attempts at self-deprecation reveal a deeper layer to ourselves. The difference between what works and what doesn’t, however, mainly lies in a necessary awareness of how we’re perceived by others.

For starters, we have to understand the aspects of our life that we’re hoping to downplay with self-deprecation. For example, one’s good looks or professional achievements, are typically things that others may covet.

And while awareness is dependent on comic timing and sense of humour, these factors usually only manifest if we are first aware of the broader context within which our persona exists.

Most crucially, this self-awareness should be patently obvious to anyone else.

Take Person X for example. X is conventionally good looking and makes money from the occasional sponsored post, though they’re not quite an influencer. X has never shown a tendency for dark humour in their posts; their updates are usually simple and pleasant.

On first glance, it’s subversive to see an attractive person take digs at their own looks, and hence worthy of a chuckle. But over time, this self-deprecation begins to appear like mere humble-bragging or fishing for compliments, because it displays a lack of awareness of how the world works, and the things we don’t control.

It can therefore feel irritating, ignorant, and insensitive.

What could work instead would be a caption such as, “Tbh if not for my genes, I would need to look for another job lmao”. In this case, the self-deprecation recognises and accepts the reality, while calling it out by putting their behaviour and perceived personality under scrutiny. Essentially, X has embraced their looks and likened themselves to the derogatory stereotype of a bimbo, that they knowingly utilise to make a living.

Consider another example. Person Y appears to lead an ideal single life, filled with regular solo trips to exotic locations and exciting stories about the people they meet. It would be truly annoying if they caption a scenic travel photo: “Took THREE budget flights to get here. Live authentic tho.”

This doesn’t just ignore the blatant privilege of getting to travel so often; it also tries too hard to be edgy. The end result is a mix of humble-bragging, weak humour, and pure pretentiousness.

A better caption may instead read, “At least I’ve got cool memories like this to comfort me when I’m a cat lady???, which plays into the archetype of an old, unmarried, and single female, while acknowledging the privilege of being single.

Again, the self-deprecation works in the latter option, because of the awareness of one’s personal situation through a cultural lens, and the unflinching honesty in its expression. It’s also actually funny.

The day that self-deprecating humour dies would be the day that life wouldn’t be worth living. But perhaps we should also consider a worthwhile alternative: learn to display outright pride in our achievements, and to own the privilege that we were born with.

If anything, at least this behaviour would be authentic.

It would also force us to reflect on why we’re afraid to come across as showing off, especially if this ‘fear’ only exists because we live in an Asian society, where humility is a virtue.

After all, from our own experience, we know it’s fake and insincere to be overly modest about the aspects of our lives that we’re obviously proud of, and that we deserve to openly celebrate.

These days, when I scroll through Instagram and see skimpily clad photos of skinny models, I loathe reading any accompanying caption that tells me about how bloated they feel or how much carbs they ate the night before. I wouldn’t, however, hesitate to appreciate any photo that admits to the privilege of winning the genetic lottery.

Unfortunately, if I had a dollar for every time I was able to do the latter, I would never have enough for a holiday, cab ride, or, frankly speaking, even a bus ticket.

We partake in self-deprecation too often to be offended by much, so don’t be afraid to tell us your thoughts here: community@ricemedia.co.
Share to
Related Articles 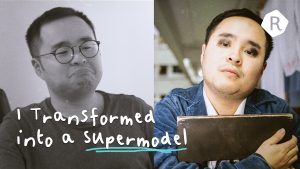