I Never Thought I’d Be a Standup Comedian “The very first time I did standup, I actually had a dry orgasm onstage. It was incredible. It was mind-blowing! My pupils dilated and everything. And it happened on Chinese New Year, so for the next two days, Chinese New Year songs took on a vaguely sexual undertone for me. My entire body was buzzing for three days straight, and I’ve been chasing that feeling ever since.”

With Wei Liang, one sometimes gets the sense that people laugh at his jokes because they’ve become so used to what he does on stage. Except that he doesn’t exactly tell jokes. At least not all the time.

at a funeral, he’s the guy who makes a joke about a sex toy

It’s a Monday night and we’re at Molly Malone’s on Circular Road—not the sort of place I’d imagine an open-mic for stand-up comedy to be held at. Outside, corporate looking folk in aggressively tailored shirts and power dresses sit smoking, having beers, and complaining loudly about work. And I suppose the corner we’re on, or a fork in the road if you want to call it that, is empty enough at this hour that everyone finally feels free to speak their minds.

On the third floor of Molly Malone’s, it’s like a universe in itself. A motley crew of aspiring comics, made up of students, someone who sells ads for Google, and a social worker (I’m not sure if he meant this as a joke), amongst others, looks strangely out of place in the “dressing room” even though it’s obvious this isn’t their first time here.

Yet this dressing room—really just a cordoned off section next to the tiny stage—is where the most raucous reactions to Wei Liang’s set is coming from. In a way, this isn’t surprising. These guys know what he’s like; that at a funeral, if people are taking turns to share a happy memory about the recently deceased, he’s the guy who makes a joke about a sex toy.

What Wei Liang does on this night, however, isn’t anything quite so dramatic. Thus far, a joke involving explicit descriptions of blowback from an adjacent urinal has elicited the loudest laughter. Self-deprecating jokes about one’s weight, penis size, and family dynamics have gone over pretty well too. Unfortunately, more complex jokes involving a build-up and a punch line that only comes a little later fall a little flat. A joke about both the advantages and complications of being white but not American draws only chuckles. One gets a decent idea of what the local audience finds funny, and so imagine what happens when Wei Liang takes the stage, and starts to sing.

The room falls into complete silence. No one in the audience knows how to react.

In a snapshot, this is who Wei Liang is: He’s trying to roll a cigarette, but his hands are so sweaty that he ruins it. Despite how sick he is (he has aplastic anaemia and Crohn’s Disease), how his illnesses have made him drop out of a career in law and now renders the possibility of an overseas tour completely unthinkable, he never stops smoking. He’s apologetic about bumming cigarettes off his friends, but can’t seem to help himself.

He’s also married a total of 14 people on Facebook—a flaw in the ‘Family and Relationships’ feature, he tells me, which allows you to wed someone without their permission. At Blu Jaz Cafe (which hosts a monthly open-mic called Destination: ink) earlier this January, he dedicated a piece called Wedding Vows to his 14th “husband” Shivram Gopinath.

During the piece, he bounced between cheesy platitudes and morbid truth bombs. Somewhere in the middle, he went, “Being with you is like coming … Home.” He continued, “You lift me up so high that I’m no longer of this earth … Like a middle-aged man at a My Little Pony convention,” to a resounding chorus of groans and ecstatic chuckling.

Wei Liang also does performance poetry, and it can be difficult to differentiate who he is as the performer at this year’s Neon Lights and who he is in real life. Both the stand-up and the performance poetry scenes in Singapore are quite small,  which basically means that everyone knows everyone else. Most have gotten so used to how Wei Liang is always pushing boundaries and saying the “wrong” things that sometimes, all it takes to get laughs is for him to take the stage in a crazy outfit. Which can be distracting from how radical his brand of comedy truly is.

By far, Wei Liang’s most notorious piece of comedy-poetry has to be Beyond Gay Formation. It parodies Beyonce’s Formation, and in essence, pokes fun at Chinese men and women who only date or sleep with Caucasian men. One line goes “Grindr snatchin’ – show me white on that GPS” while another goes “Blond hair, blue eyes give cock market inflation.” Yet this isn’t the best part.

The best part is when he singles out a Caucasian man in the audience, and directs the entire piece at him. The first time he performed it was at destination: INK as well. “It was very well-received, got rapturous applause, and I friended both the white guy and his Chinese girlfriend on Facebook afterwards,” he says.

But it also has the potential to bomb. Which it has—“Usually with comedy audiences, where the white guy I’m dedicating it to is not having it at all,” he points out. In the same way, he has been blocked on Facebook before for “marrying” someone without their permission. Not that he actually gives a damn.

So much of Wei Liang’s performances revolve around sexual innuendo and imagery as a response to how Singaporeans are afraid of sex, or at least of approaching it openly and honestly.

While he concedes that this isn’t true of all Singaporean audiences, he contends that it’s happened often enough for him to think there’s a pattern. At the same time, he’s been through a lot of pain both physically and emotionally, and it’s given him a very dark sense of humour.

As I watch the comics take to the stage at Molly Malone’s, some doing okay while others do phenomenally badly, it occurs to me that it takes a certain appetite for pain to want to do this. After all, every joke that hits or misses is in itself a verdict on how talented you are. One of the comics that night, for instance, simply read what sounded like a thesis off her iPhone to an awkwardly silent audience. Why would she ever want to put herself through something like this again?

Good comedy is an art that one hones through experiencing and understanding life’s countless ironies.

But if she does, then props to her. Because I could never do it. And much like how Wei Liang says that he probably wouldn’t be performing at all if he wasn’t sick, good comedy is an art that one hones through experiencing and understanding life’s countless ironies. It’s about getting to the heart of what matters to all of us, and then finding the humour in turning those perspectives on their head. After all, most things aren’t funny because they’re funny. They’re funny because they make no fucking sense.

Instead of illustrating this with the content of his jokes, Wei Liang does it with the form of his jokes as well. If you’re expecting him to just talk, he’ll sing a song. If you’re thinking there are lines he won’t cross, he’ll cross them. When you’re not expecting him to take the stage in a costume, he’ll do just that. Often, you’re so distracted by the theatricality of how he says what he says that the severity of his words—in tonight’s case, a joke about gun laws in the US and a child shooting her mother—only hit you about a second later.

In the end, nothing quite summarises one’s reaction to Wei Liang better than this status update he posted on the day of his sister’s wedding: 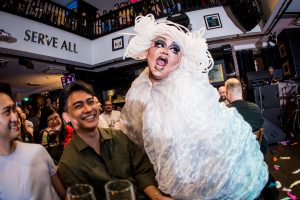 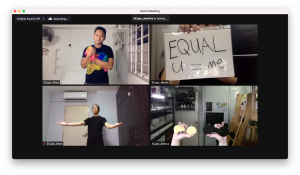 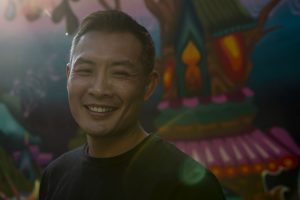 Cover image by Singapore Art Museum. As a circus performer, 24-year-old Jonathan comes face to face with risk on a daily basis. In striving to perfect stunts like fire spinning and aerial performances, he has realized two things about life: one can never block out uncertainty, and it actually is