One Couple’s Secret To 57 Years of Marriage: Eat The Same Breakfast, And Take Things As They Come 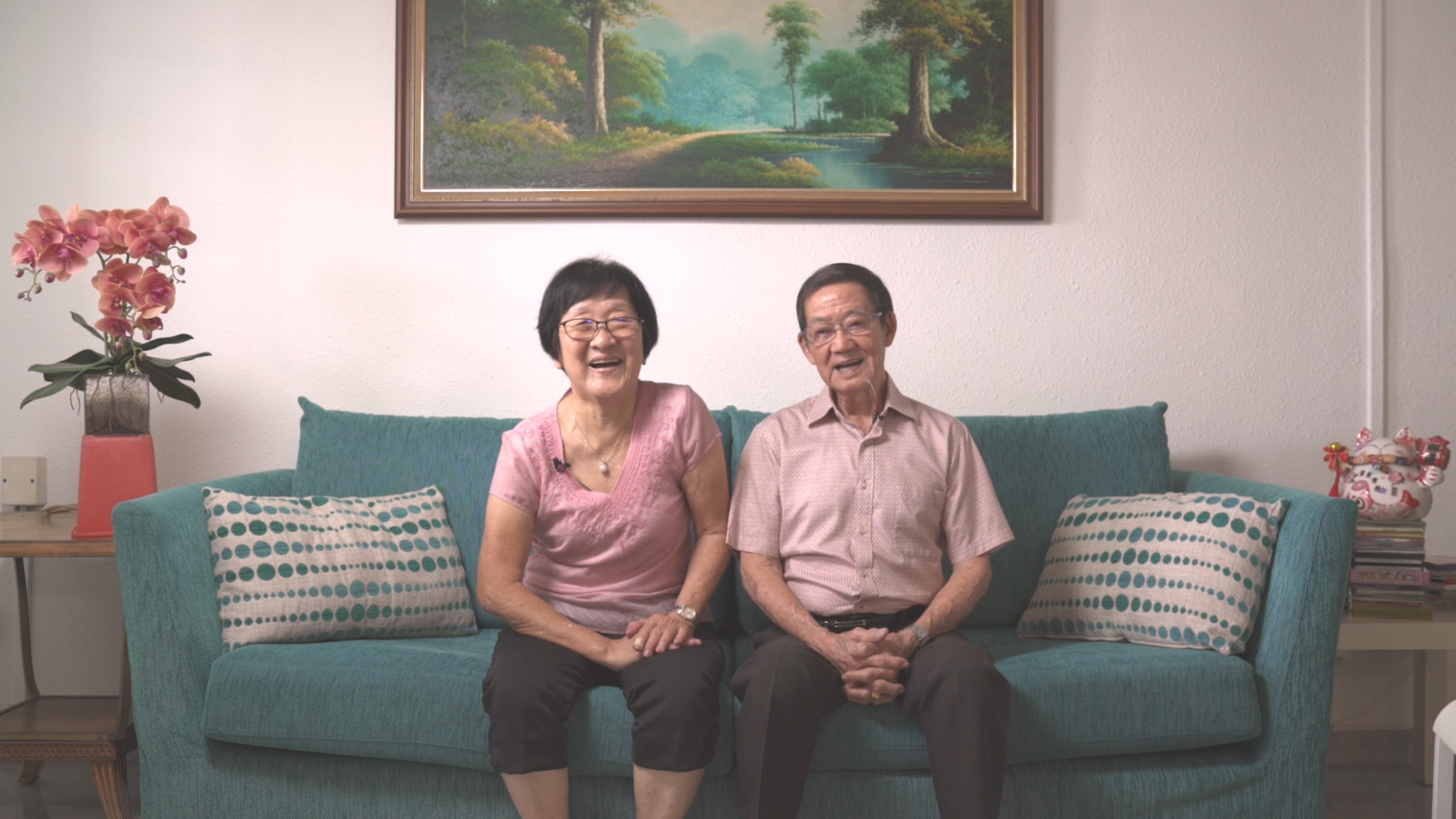 This is the first piece in a series that explores the theme of longevity. Through the stories of Singapore’s seniors, this series hopes to capture what it means to have peace of mind and live a fulfilled and meaningful life in one’s old age.

All images by Zachary Tang and Toke Hong Loong.

Most of us know that long-term love takes work. The problem is that we are terrible at this.

A couple of months ago, I read a book of essays about love: how we often get in our own way of finding it, and then make messes trying to sustain it. One line in particular stood out: “My job was not to choose a good person to love, but rather to be good to the person I’d chosen.”

This struck me as both incredibly wise and and incredibly understated. The day-to-day compromise, commitment, effort, and negotiation which love demands is no small ask, and many of us—however willing we might be in spirit—find ourselves unable to live up to this in practice.

In other words, for the average Singaporean, ‘till death do us part’ amounts to around 50+ years. Making love last this long is nothing short of a Herculean feat. If you can manage this, you’ve pretty much won at life.

All of this is weighing on my mind one Sunday morning, when I meet Mr. Ong Mui Kim, 86, and Mdm. Tok Kim Hoi, 80, at their home in Jurong West (joined by their daughter Lee Fund). The couple, who run O’kee Fishball Noodles in Boon Lay, have been married for 57 years.

“What I love most about Auntie is the way she walks,” Uncle says. “She had a very nice walk when she was younger.”

Then he quickly adds, “She walks differently now. But we should be thankful we can even walk at this age.”

The couple met in the late 1950s, when they were both working in the cafeteria of the then-Nanyang University. He was cutting fruits; she worked elsewhere in the building, and got to know him when she visited his stall.

They decided to make a go of it together. They got married. She joined him selling noodles. Together, they bought their first home, a three-room flat, with their CPF funds, before moving to a bigger one several years later. Money was tight, but they did their best to manage and saved what they could.

“It [my salary then] was very little, but it was enough then because we were a small family, and things were also cheaper. Having just enough is fine, we didn’t need to think about much.”

Uncle and Auntie tell me that as a couple, their priorities—or rather, priority—was always simple: to raise their children to be happy, healthy, and self-sufficient. Now that they have achieved this—the couple’s four children are all grown, with eight grandchildren between them —they are free to focus on themselves and spend their days as they wish.

They open their stall five days a week, taking Thursdays and Sundays off. This is more out of a desire to keep busy and see their long-time customers—almost a kind of ‘community service’, Fund jokes—rather than any real financial need; they began planning for their retirement early on, which means work is now an option rather than an obligation. Over their four decades in business, they’ve amassed regulars who come from as far away as Toa Payoh and Hougang to enjoy their noodles.

Nonetheless, I’m taken aback to hear how demanding the work is. Fund tells me her parents get up at 2:00 AM on the days they open the stall. Although it’s less laborious than it used to be (they no longer make their own fishballs, for example), there’s still plenty to be done.

“When we get to the store, we cut vegetables and cook the soup. At around 4:00AM, when the first customers come, we have the food ready for them,” says Auntie.

Don’t they find this tiring?

“We’re used to waking up early, we do it for our customers. And anyway, we leave home early so we can close the shop early,” Uncle tells me.

“The most enjoyable thing is that we’ve earned enough money and can rest. Now that we are semi-retired, we can go on holiday, and rest even more if we want. We don’t necessarily have to work every day.”

So I ask about what they do when they don’t work.

But she also tells me that despite their age, one of the couple’s biggest joys is travel. They go on cruises frequently, every 2 or 3 months, to countries in the region like Thailand and Vietnam. The trips are short, around 3 to 5 days, and the contained environment (no long treks up and down slopes, or dizzying variety of tourist-trap food options) both suits them and gives their children peace of mind.

“We go with our friends, also old couples. It’s just a few days. Get on the boat, get off the boat, explore a bit, get back on the boat. We might watch movies or listen to music as well,” says Auntie.

Every year, the entire family also goes on a clan holiday together. In recent years, this has taken them to Taiwan, Melbourne, and Japan (where their favourite activity is spa day at the onsen). This year, they will be going to Guangzhou, where they will visit Uncle’s ancestral village.

This standard of living is years away, literally and figuratively, from what they had when they started—the result of decades of hard work and prudent financial planning. Between their income, savings, and the money they receive from their children, the occasional vacation is now well within their ability to afford.

“We keep some money for retirement; enough to eat, enough to live, that’s good enough. We can save from the allowance that our children give to us as well,” says Uncle.

It also helps that they’re both in good health. While Singaporeans are living longer, this doesn’t necessarily translate to living well; however, the pair are both in remarkably good shape for their age (any octogenarian who can get up at 2:00 AM and stand over a hot stove for hours really deserves an Olympic medal). Fund tells me that they take care to eat healthily and drink enough water.

“We don’t really eat a lot for breakfast. Just the noodles we make, every day,” Uncle adds.

Lastly, they practise daily meditation, which they learnt at their neighbourhood community centre. “Maybe half an hour a day, but no fixed time. Just whenever we have time,” says Uncle.

“Lee Kuan Yew also meditated, you know? That’s what he told the newspapers.”

I didn’t know. But then again, there is so much I am slowly learning.

As a journalist, one of the things I find hardest about my job is separating my own opinions from whatever’s in front of me. Viewing things solely through the filter of your own experience is the surest way to botch an interview, and learning to see people as they are is a lesson that never ends.

Nonetheless, as a chronic over-thinker with the emotional memory of an elephant, I find myself bewildered by how easily Auntie and Uncle seem to accept … everything.

How do you make decisions? I ask.

“Together. He decides about the business, because he started it. But otherwise just do the same thing.”

What about managing your finances, I prompt. Many couples get into fights about money, and you’ve mentioned that you didn’t earn very much as hawkers. Was this the case with you?

Why do you think you work well as a couple? What’s the secret to planning your life together?

“I don’t know. No secret lah. I just tell her everything.”

I shuffle my papers in an attempt to buy time to think. Lee Fund looks at me sympathetically.

“Maybe communication and trust just come naturally to them,” she suggests. “It probably helps that they’re very calm, not easily agitated.”

“But I think they mainly go along with whatever the other party wants to do. No insisting, “I want to do this.” To me, it’s always how they’ve lived their lives.”

Throughout the interview, the phrase which keeps coming up, more than any other, is yi tian yi tian lai (take it a day at a time). Uncle drops it in response to pretty much every other question I ask, and Auntie echoes it as well.

Such a philosophy is alien to me, but I’m sure it will seem equally mind-boggling to anyone who’s ever tried to plan their future according to the Escalator of Life: graduate, work, BTO, marriage, kids, retirement (in that order; miss a step by just a year or two, and the whole thing comes apart).

It’s not even just the major life stages, but the decisions which make up the day-to-day reality of love as it is lived. Some are easier to make than others (where to go on holiday, what to have for dinner), while there are those that call for A Serious Talk.

What if one of you gets offered a job overseas? What if one of you gets ill, and needs daily care? Do you retire at the same time, or separately? And sometimes, it’s the smallest things of all: how do you keep choosing every day to be kind, patient, and generous to your partner, especially on the days you don’t feel you have it in you, and you’re not sure they’re the same person you married?

How do you repeat all this for 50 years?

I am sure Auntie and Uncle’s marriage has seen struggles and sorrows which no-one, save the both of them, will ever be privy to. Certainly their approach to love will not work for every relationship. After all, it’s just as easy to oversimplify things as it is to overcomplicate them.

But the foundation of ordinary devotion on which their 57-year-marriage has thrived is no small feat. It’s survived children and work, arguments and ageing; decades of rising in the wee hours of the morning to stand beside each other in a tiny, boiling-hot hawker stall for hours, dishing up bowl after bowl of noodles. I don’t know if this is what they dreamed of when they first met, back in that canteen in the 1950s, but they got here by taking it one day at a time—and choosing to do it together.

When I turn off my recorder and suggest that we round off by taking photos, they rise from the table in sync, causing Fund and I to smile at each other.

A few minutes later, they come back in matching outfits.

This piece was sponsored by the CPF Board.

What do you think is the secret to lasting love? Tell us at community@ricemedia.co .