How many selfies have you posted in the past month?

After taking a brief look at my Instagram feed, it seems that everyone has a duck face and smouldering eyes in their selfie arsenal these days.

However, regardless of how many of these selfies you’ve taken and uploaded on social media, it is unlikely that any of your selfies received as much flak as the one below.

The selfie, taken by our Minister for Foreign Affairs, Dr Vivian Balakrishnan, depicts him with with North Korean Leader, Kim Jong Un, and Minister for Education, Ong Ye Kung.

Reactions from Twitter users were mixed. While some felt nationalistic pride that their minister was up close and personal with the enigmatic Kim, some looked beyond the surface and wondered if more thought should have gone into the appropriateness of posting such a photo on a public domain.

Naturally, they made sure their displeasure would not go unnoticed.

Their sentiments were echoed in a Straits Times column, which put down our ministers’ actions, saying that they had gone “too far” and that they should have been more mindful of the weight of their actions, along with the potential repercussion that people will become desensitised to Kim’s crimes because of the selfie that humanises the “Little Rocket Man”.
We don’t quite agree with this.

For starters, to say that the summit was mammoth-sized would be a huge understatement. The hype had been building over several weeks. We’ve seen eateries come up with uninspired cultural fusion menu items in order to capitalise on the public’s interest, and we even had expressways blocked off when Kim landed at Changi Airport, causing massive delays simply to ensure Kim’s security.

Hordes of people were waiting on the streets outside the St. Regis, hoping to catch a glimpse of Kim and, more importantly, snap a blurry picture of his motorcade which they could show their friends.

With the mystique that surrounds Kim and North Korea, it is fully understandable why people were so much more curious about him than Trump, who receives media attention on a daily basis, for better or for worse.

Why would Dr Balakrishnan and Mr Ong be impervious to this hype?

Yes, it is true that as ministers, they should be aware of the power they wield and the influence they carry. This is especially true on social media platforms, where the youth of Singapore spend most of their time lurking. Those who are not aware of the full extent of Kim’s human rights violations might be misled into thinking that he is the huggable chap who always gets extra servings of meat from the auntie at economical rice stalls because he is “still growing”.

That is quite a jump from ‘mass-murderer’.

However, even if the alleged attempt to humanise Kim does prove to be effective on a few people, it says more about them than it does about our ministers. As citizens of the world, it is incumbent on us to form our own opinions about global affairs.

It is perhaps the indecisive people who take half an hour to decide on a dinner venue before changing his or her mind at the last minute who are most susceptible to this. If your opinion can be swayed by a mere selfie, it only goes to show how much of a stance (or lack of it) you had in the first place.

Millions of selfies are taken worldwide on a daily basis, and most of them are ultimately inconsequential. A selfie is something that people do when they want to commemorate an event, while capturing themselves in it, a la tourists taking pictures at the Eiffel Tower in Paris or the Colosseum in Rome.

Most of the time, they are completely meaningless and are used merely to attain validation from peers.

Moreover, Dr Balakrishnan and Mr Ong are not Baey Yam Keng. Not every post is an exercise in narcissism. Dr Balakrishnan has just over 100 posts on Instagram, while Mr Ong has about 400. Mr Baey, on the other hand, has over 4000 posts.

On one hand, this could mean that the former two ministers are more calculated and strategise their posts more in order to get a specific sentiment from the public. On the other, it could simply mean that they do not care as much about social media.

Besides, politicians don’t take selfies for the same reasons that we do. What we use as gestures of affection and camaraderie are, for them, simply diplomacy, good PR, and theatrics. Nothing more.

Let us not forget that being a good host to the Summit means that you have to facilitate events and make sure that your guests feel right at home. From a political standpoint, we have to treat both heads of state as equals. We gave Trump a cake (which, tbh, was far more gross); the least we could have done for Kim was to make him feel special with a night-time stroll and a picture to commemorate the day.

Sometimes, we have to learn to take things at face value. Take Twitter CEO, Jack Dorsey.

Just a couple of days ago, he had to apologise for posting a photo of his food order at Chick-Fil-A, a fast food restaurant whose founder recently landed in hot water for anti-LGBTQ comments.

While it’s understandable that public sensitivity is at its height these days, with the fight for true equality on all fronts, I wouldn’t want to live in a world where I cannot go to KFC and buy a two-piece meal because it was just revealed that Colonel Harland Sanders was an arsonist who enjoyed lashing out at each individual chicken with verbal abuse before lathering them in 11 secret herbs and spices.

With North Korea’s potential denuclearisation, their reputation and political views are seemingly on the mend and it would be almost hypocritical of us to not align ourselves with Kim, seeing as we hosted the summit in the first place.

So, no. They didn’t go too far with the selfie.

We already made a pact with the devil when we agreed to host the summit. It’s only natural that something like this followed. 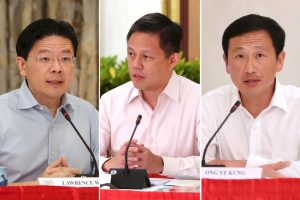