A Cynic Attempts to Find God at City Harvest Church

Photography by the author. The text has been amended for accuracy.

About a year ago, I stopped telling people I was Christian, even though I have always been told I was “born Christian”.

I toyed around with the term “free-thinker” for a bit, but never liked how overly general it sounded. What am I supposed to be thinking freely about, anyway? So instead, over the past year, whenever anyone asked what my religion was, I would simply shrug and say, “I’m open.”

It’s not so much that I don’t want to be Christian; it’s that I just can’t get into religion (or more specifically, organised religion) at all. In fact, it’s been 18 years since I left church out of boredom and disinterest.

Throughout the years, I’ve accepted invitations to friends’ churches in hopes of finally becoming the ‘good Christian’ that I was supposed to be. In university, I even briefly hung out with people from a campus varsity Christian fellowship. (I never felt more out of place.) And then there was the year I told myself I would start reading the bible again but lost focus after a few pages.

No matter what I did, everything reminded me of the reasons I stopped going to church in the first place: religion and its people were simply too rigid for me.

Nonetheless, I am told God works miracles even on the hopeless. So this year I decided to give City Harvest Church’s (CHC) Christmas service a shot.

I’ve heard a lot about CHC’s service, replete with high entertainment value stage productions, professional laser lighting, and impeccable audio quality. People say that a megachurch can resemble a cult, but at least it adds variety.

Besides, nothing else has worked so far, so I figure I have nothing to lose with this last ditch attempt.

At 9:45am on Christmas eve, I arrive at Suntec City’s Convention Hall 601 to see swarms of people. Many hang around at the bottom of the stands, catching up with their friends before the service begins.

In typically Singaporean fashion, there are entire rows of empty seats, reserved only by one bag placed at the very end. Clearly even the Lord’s servants are not immune to bloody inconsiderate behaviour.

15 minutes into the service, pastor Sun Ho comes onto stage. She speaks with a lilting and affected tone. Her voice breaks from emotion as she greets us, and I am afraid she may just collapse from the melodrama. She is flanked by a Chinese translator, who is equally exaggerated in her tone and gestures.

“Jesus will come into your heart! Even if it’s not the most celebratory Christmas!” says pastor Sun.

She then informs us that first or second timers will receive “gifts” at the end of the service. When she asks for those who are new to CHC to stand, I remain seated.

At this point, I feel as though I am in a sales convention instead of celebrating Christmas. Pastor Sun has gone on to promote CHC’s newly launched album, My Beloved. It features a live recording of CHC members worshipping for two nights in October this year.

“The timeline was really tight, but we wanted to be good stewards of the Lord. We pray that this album will touch and revive hearts towards Jesus.”

A sepia toned clip from the CD is projected onto the screens, featuring pained and dramatic faces at worship. There is even the blossoming of a white rose. It is very over-the-top and I am very confused.

Then pastor Sun says, “If you haven’t purchased [the CD], you can buy it at the end of service and online too.”

Later, to drive home the point that we have come to donation time, the executive pastor says, “What you give is a matter of willingness, not wealth.” But this is then followed by the passing around of white envelopes. You can choose to donate to the church by cash, cheque, or even credit card.

He adds, “I want you to take the envelope out, and let’s make a great offering to Jesus. Once you’re ready, let’s raise our offering to the Lord and pray. This is our expression of love to You.”

Almost the whole hall raises their white envelopes. The boy seated next to me guffaws then reaches for his phone and scrolls through his Instagram feed instead.

But I remind myself that I am here to learn, not to judge. I try to curb my cynicism by focusing on the play that they put up.

To be fair, it is as excellently produced as people told me it would be. The music is catchy, the costumes are beautiful, and the cast is eloquent and natural.

Today’s storyline features two scientists who go back in time and inadvertently alter the future. They have to fix it by saving Joseph, Mary, and baby Jesus. The story ends with the protagonist, who was initially disbelieving of God, reconciling with his father. He also decides to go home for a Christmas dinner with his mother. We’re told this is the true meaning of Christmas.

After the play, pastor Sun begins her sermon. Her style of delivery can feel grating, like an insurance agent hard selling a lousy policy dressed up in fanciful marketing. But it doesn’t stop a couple of messages from resonating with me.

“Small things, if not corrected, become big things. How many of us can afford to make slight degrees of changes in our lives?” she says.

“When God shows up in our lives, we know that it’s going to bring something we are not always ready for.”

These may be platitudes, but like horoscopes, they’re self-fulfilling prophecies. For instance, if you were looking for reasons to believe, you only need to think of all the times these teachings ‘worked’ and were applicable to your life. Of course then it’s easy to believe that God exists.

Pastor Sun wants to emphasise that Jesus never abandons us, even when there seems to be no hope left. She references a scene in the play, where there’s no room for Mary to hide from the guards who have come for baby Jesus.

The convention hall echoes her English and Mandarin phrases. As far as I can tell, these are not biblical verses.

She moves on to share actual testimonies of people who have found God. I’m not surprised there are several stories of inmates. These people are usually used by churches as their standard template for the ‘saved Christian’.

Secretly, I wonder why we just can’t be happy for them. After all they’ve been through, they’re reduced to a mere anecdote in a megachurch’s Christmas service.

Pastor Sun delves into something about letting go of anger and guilt, and something else about how a singular event can change someone into a believer of God. Despite trying my darnest to hold my interest, I space out halfway. It’s as though I have a natural aversion to anything seemingly good and pure.

Summarising backsliders and sinners who have turned over a new leaf, she says, “A life transformed because of what Jesus has done.”

Yet throughout the entire worship session, I have never seen one image of Jesus projected onto the large screens in front. Where a cross would be in a ‘normal’ church, all I see are the pastors’ faces here at CHC.

A friend once compared my spiritual journey to yoga.

“It doesn’t work for you because you don’t need it. You haven’t reached a point in life where you can’t solve your problems by yourself,” he said.

He meant to imply that I was self-sufficient. But it made me wonder if it’d take a monumental suffering or loss to make me the Christian my parents imagined I would be 27 years ago. If it never comes to that breaking point, does that mean I’ll never “find God”?

Frankly, I’m okay with that. Even though I inherently know religion is just not for me, a part of me has always insisted on conquering something as traditional as religion because my ego sees it as a challenge. As a result, I usually end up feeling guilty on Christmas for not having been a ‘better’ Christian throughout the rest of the year, then make futile promises to ‘do better’.

Towards the end of the service, pastor Sun asks those who want to renew their faith in the Lord to step forward to the stage. I decide to head down, where I meet Sophia, who’s tasked to approach people who have come forward.

The seasoned CHC member tells me that she initially chose CHC because of an encounter with God that told her this church was the one for her. She keeps her recount vague, but she’s earnest throughout. There is also a bit too much self-righteousness, which she proudly claims to possess as well. All I know is the conversation makes me look like the devil incarnate next to her.

Sophia asks why I’m here today, and I decide to be honest.

“I’ve never been interested in religion. But since I’ve always been told I am Christian, I thought I would try to see if I could live up to that title.”

Surprisingly, she appreciates my candour. She hands me a form to fill in, and I’m compelled to leave her my real number. She tells me that she will reach out to “follow up”. I want to tell her not to waste her time, but instead I smile politely.

I am tempted to pose her all the difficult questions, as though challenging her to make her pitch for Christianity worth my time, but faith is not an obstacle to conquer. What is the point, if I’m doing this simply so she can prove to me that her religion is worth investing in?

I know I should try harder, and keep trying, if I genuinely want to renew my faith. But I am also aware that my cynicism prevents me from ever being a wholehearted believer, if at all.

So when she sends me a WhatsApp message a few hours later to ask if we can meet for coffee before the year ends, I do what I should have done just now and all the countless times over the last 18 years when people have tried to persuade me to return to church.

I read her message, hover over the keypad for a second, then I delete it. 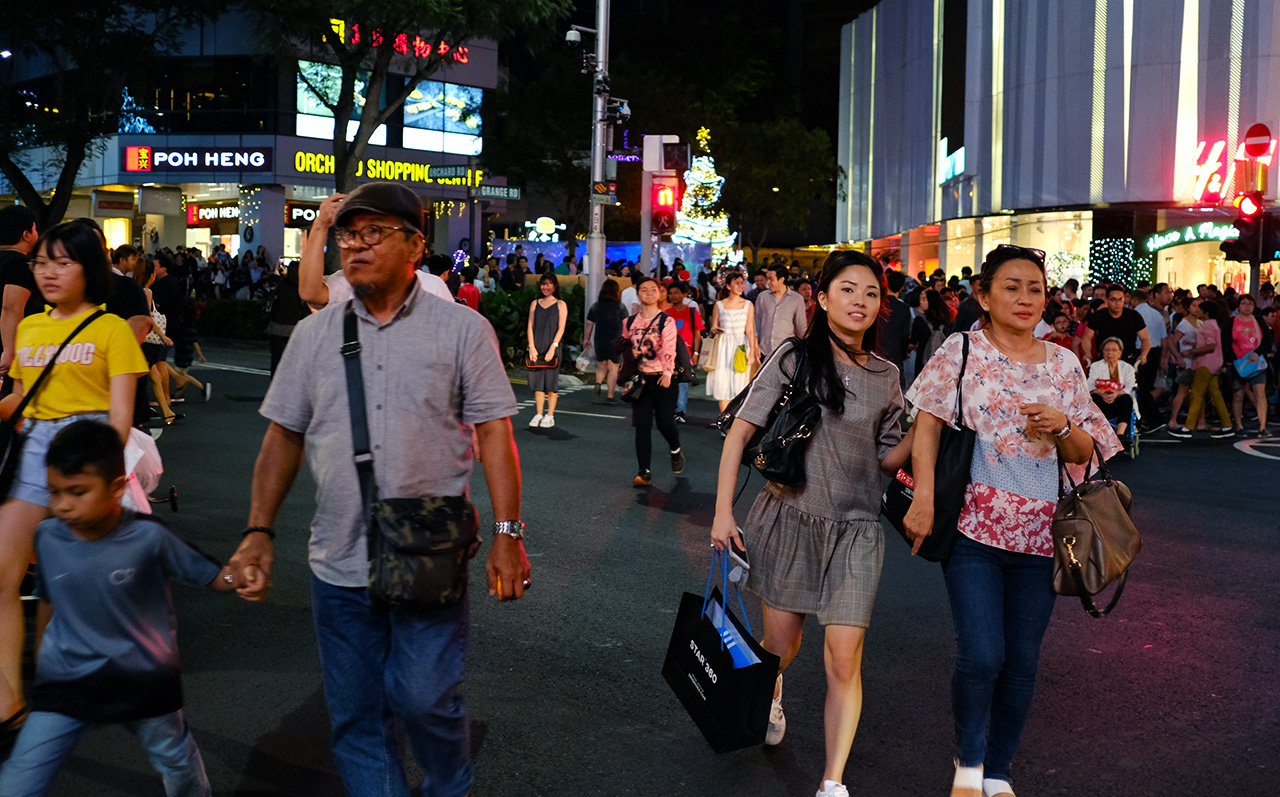 Orchard Road’s “Shibuya” Crossing is a Lost Cause