Top image courtesy of Bob Hadden, singas.co.uk.
Note: The anecdotes here are based on factual accounts from newspaper reports and oral histories, but have been presented as creative non-fiction.

Other than Vidya and Swee Lin, who are fictional characters, all other individuals mentioned in this article are historical figures. In addition, any direct speech that is italicised is a verbatim quotation of theirs and is footnoted with the relevant source; anything not italicised should be assumed to be a creative interpretation.

The proprietor, Ho Meng Quee, had spent $250,000 (more than $1 million today, after inflation) to renovate Joseph Elias’ former two-storey, beach-front bungalow into a hotel. Not just any hotel, but “SINGAPORE’S PREMIER PLEASURE RESORT … off Tampenis Road”, as an advertisement in The Straits Times screamed.[1]

It had a private beach for swimming and boating. A lawn tennis court. A restaurant where people could enjoy midnight dining by the sea while being serenaded by live music. Not even Singapore’s premier hotel at that time, Raffles Hotel, could boast these attractions.

Accordingly, it gained a reputation as the holiday destination of choice for people seeking a respite from the city. Moreover, through the decades of hosting nightly dances, watersports events, and beachfront activities, Pasir Ris Hotel laid the foundations of Pasir Ris’s developmental trajectory. Across the decades, Pasir Ris has transformed from a rich man’s playground during pre-independence times to becoming a recreational hub designed for, and loved by, all Singaporeans today.
20 February 1955: Water Sports
The crowd roared as Lim Swee Guan shot off the ramp at 30 miles per hour, traced a figure 8 in the air with his body, and landed gracefully back into the water with the composure of someone who was taking a leisurely stroll at a park.

Everyone was pleased when he was awarded first place in the water-jump category during the water-skiing gala’s prize-giving ceremony. Organised by the Malayan Waterski Association and held at Pasir Ris Hotel’s private beach, the gala was not the inaugural event to showcase watersports in Singapore, but it was the first to be open to spectators. Pasir Ris Beach was chosen to hold the event because it was still relatively unspoilt, compared to Changi Beach, which had its shoreline packed with Royal Air Force facilities.

As A. C. Cooper, the publicist of the event, says: “We chose Pasir Ris beach because it is safe for families to bring along children and also because there is plenty of parking space.”[2]

Indeed, the novelty of the event had attracted whole families, with children in tow. It opened their eyes not only to the thrills of water sports, but also the sense of community that sports can foster in diverse groups of people: among the participants of the gala was Lucy Cheng, the only local woman jumper in the whole competition, and Count Hugo van Zuylen, a Dutch speed skier who dominated the men’s open slalom course.
August 1958: Workers’ Beach Party
“Swee Lin, you have a twig in your hair,” Vidya giggled. “Looks like bird’s nest.”

“Huh? Where? Help me take out leh!” Swee Lin exclaimed, frantically swatting her hand around her gigantic perm.

Vidya carefully extracted the rogue twig that had managed to burrow its way into Swee Lin’s hair.

Vidya and Swee Lin emerged from the bushes and took their first steps onto Pasir Ris Beach. As blue-collar workers, they had never had the opportunity to go to the beach before. Prior to this day, Pasir Ris was mostly an enclave for Europeans and wealthy locals, such as Run Run Shaw, who owned bungalows in the area.

However, in 1958, the municipal government undertook a $200,000 project to install public works, such as changing rooms, hawker stalls, and public lavatories on the beach. Its goal was to make recreational activities more available to the wider Singapore public, and, in the process, encourage interaction free from class or cultural lines.

As then Chief Minister Lim Yew Hock announced during the official opening ceremony of Pasir Ris Beach on 17 August 1958:

One of the big changes in Singapore is that the weekend has become everybody’s right, and it is our duty to see that the worker as well as the employer has his opportunities for recreation.[3]

“Eee! Got toilet! Then we change in the bush for what?” Swee Lin shrieked.

5 May 1959: JBJ And The Marilyn Monroe of Hokkien Films

In its early years, Pasir Ris Hotel was a glamorous attraction not just for vacationers but film directors as well, who were drawn to the luxurious atmosphere of the property. The 1959 local film Saudagar Minyak Urat (Love Crazy), for example, was filmed at the hotel’s sea-water swimming pool. (You may remember it for popularising the P. Ramlee song “‘Bila Mama Pakai Celana”.)

But from January 1959 to 1966, Pasir Ris Hotel was taken over by the Royal Air Force to serve as a transit hostel for their troops awaiting more permanent deployments. With its changed management and policies, the hotel no longer accepted bookings for its rooms, though the public was still welcome to have food and drinks at its verandah.

Or so the cast and crew of Wife’s Property, a Hokkien film that they were shooting in the area, thought.

“We occupied two tables on the verandah, where Europeans were sitting,” Low Won, the director, said in a newspaper report. “They were served. But we were left unattended.”

“After a long time we approached the manager. He was downright rude. He said we could not shoot scenes. We had a difficult time explaining that we had come just for refreshments.“

“Finally after an hour a boy came. He too, was rude. In a rough voice, he said, ‘What do you want?'”

“Of course, by then we were so fed up we refused to buy any drinks at all.”

Lead actress Ting Lan, cinema’s “Hokkien Marilyn Monroe”, was so enraged by the hotel’s rudeness that she exclaimed: “I have never been snubbed like this in all my life”.[4]

This incident, arguably, marked the turning point of Pasir Ris Hotel’s fortunes. While it continued to function for 20 more years, it never regained the lustre it possessed in its earlier days, possibly because of the exclusionary policies that were put in place during its administration by RAF.

On the bright side, with the dulling of the hotel’s sheen, it became a more accessible destination—financially and otherwise—for locals. Attracted to the hotel’s idyllic location and quietude, Singaporeans from all backgrounds began to have their honeymoons at Pasir Ris Hotel: one couple was Joshua Benjamin Jeyaratnam and his wife Margaret Cynthia Walker, who spent their honeymoon there in 1957.

Jon’s heart pounded as he drove Helen up Upper Serangoon Road, turned into Tampines Road, and finally entered Elias Road. As the car wove around the sand dunes—telling him he was finally free from the congested city—Helen’s charming laugh tinkled into his ear.

“Jon, are you sure you are not lost?”

His panic increased. Choosing Pasir Ris Hotel as his honeymoon destination was a risk. The 15-year-old hotel was long past its heyday of entertaining movie stars and the upper crust of Singapore society. The building was old. The decor dated. There were even urban legends about drownings that had occurred at its surrounding beaches.

But as the two-storey bungalow—framed by coconut trees and opening up to the sea—finally loomed into view, he heard an involuntary gasp from the passenger seat, and the stampede in his heart quietened to a flutter of excitement.

The sense that the world had passed it by had, in fact, increased its bucolic charm: the hotel had beauty without ostentation, grandeur without crowds.

Sure, perhaps the sand was more muddy than “sparklingly white”, as advertised in the papers. Or that the beach was no wider than a cramped bedroom in a Chinatown shophouse. But it was practically deserted, clean, and he could already see all the lazy picnics they would have on the beach after enjoying an afternoon swim. And when the sun set, they could go to the new open-air dance hall and waltz the night away.

So absorbed in his imagination that Jon almost didn’t notice that Helen had placed her hand on his. Turning to face her, he was greeted by her smile, and in that wordless gesture he felt as if all the questions he ever had about his life were answered.

31 December 1983: You Can Check Out Anytime You Like
Robin: Thanks for inviting me and the rest of my staff to your New Year Party. When we heard that your events company wanted to organise a Fire and Ice themed party at our premises, we immediately said yes. You know, this will be the last time anyone will set foot in Pasir Ris Park Hotel. It seems only appropriate to send off this grand dame with a bang, not with a whimper.

Gilles: Least I could do. It’s a real pity that the hotel will be closing. It’s such a remnant of the whole colonial era.[5]

Robin: Maybe that’s the problem. A relic from the past has no place in today’s world. We can’t compete with the PA Holiday Camp and PA Holiday Flats that the People’s Association built in recent years. It costs just $10 to rent a three-room flat there—that’s five times cheaper than our rates!

Gilles: I heard the whole area is going to be redeveloped?

Robin: Yes, the government bought the whole Pasir Ris area. Including the hotel. And the kampong. I think they want to build a public park here. I guess it’s good. The average Singaporean can now enjoy recreational activities on the beach, when in the past it was the reserve of a few rich people.

Gilles: Wasn’t there already a plan by the hotel’s owner to spend $35 million to upgrade the hotel into a tourist centre? What with Changi Airport opening nearby.

Robin: The developer pulled out. I don’t know why.

Gilles: Maybe this is for the best, huh? Out with the old, in with the new. It being New Year’s Eve and all. Speaking of which—five …

Robin: I remember coming to this place when I was a little boy …

Robin: It was very exclusive, somewhat like the Singapore Cricket Club.

Robin: And the sea came right up to the hotel’s doorsteps.

Robin: It is so sad after so many years working here and the many memories of the place and people—

Robin: It is all going to end so quietly.[6]

Postscript: After Pasir Ris Hotel was demolished in 1984, the government started to reclaim land around Pasir Ris Beach to build Pasir Ris Park. Opened in 1989, the park is one of Singapore’s most popular recreational spaces today.

Alongside the park, leisure facilities such as Downtown East (formerly known as NTUC Pasir Ris Resort), Cherryloft Resorts (formerly Costa Sands Resort, and the Urban Development and Management Company chalets before that) make up the cluster where Singaporeans of all backgrounds can go to enjoy a fun day out at an affordable cost.

Even though many may not remember its existence, Pasir Ris Hotel is arguably where Pasir Ris first acquired its reputation as the recreational heart of Singapore, a legacy that lives on till today.

This article is brought to you by the National Heritage Board, which is currently running Singapore Heritage Festival.

This year’s edition of the festival uses technology to transport you back in time around three of Singapore’s beloved districts: Tanjong Pagar, Pasir Ris, and Kallang. So if you’ve ever wanted to try your hand at baking Tong Heng’s iconic diamond-shaped egg tarts that they’ve been making since 1935, or go on a digital tour of Kallang during at time when the sea lapped the shores of Beach Road, now you can, all from the comfort of your home. #SGHeritageFest

What memories do you have of Pasir Ris? Share them with us at community@ricemedia.co. 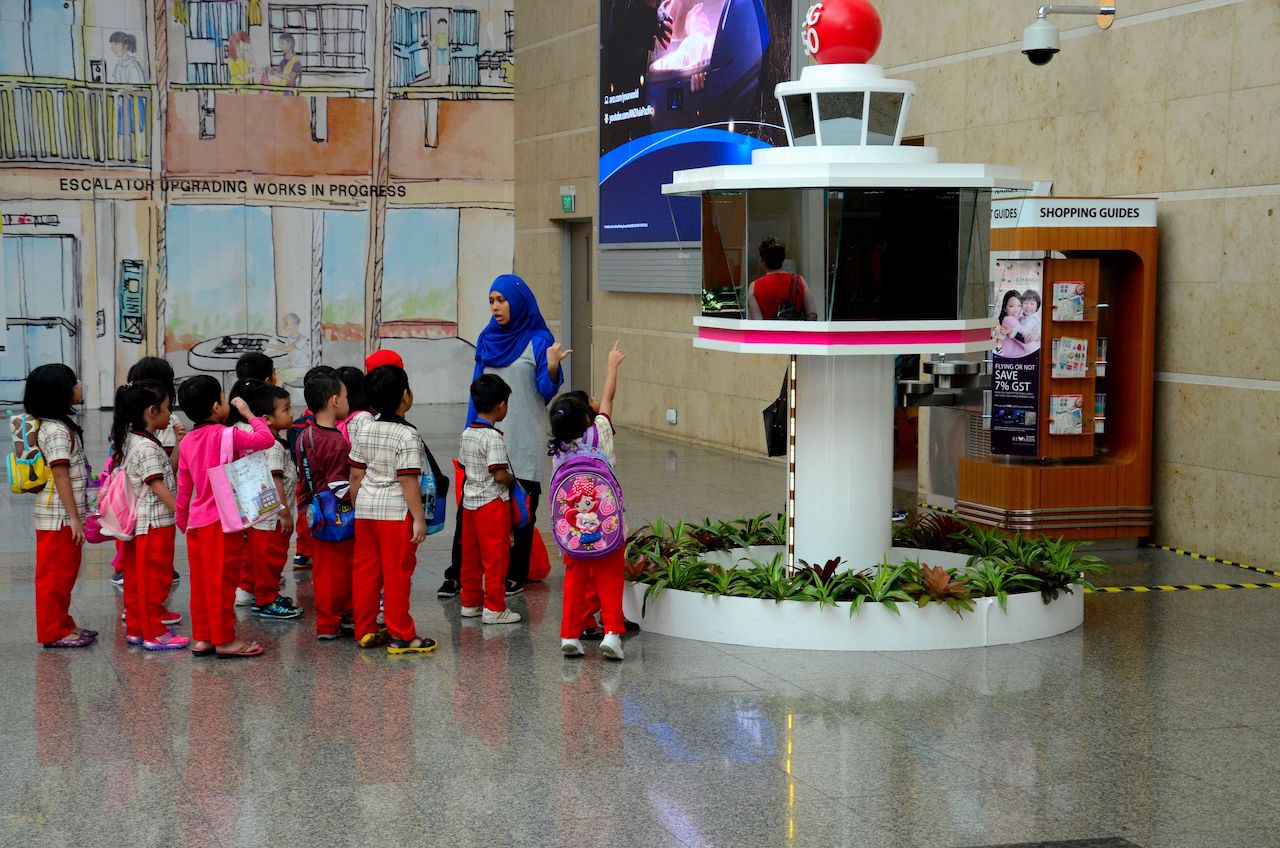 "Can We Stop Being So KS Already?" On Classrooms, Culture, and Control