How Crystal Healing Got Its Groove Back (Despite Scientific Criticism) 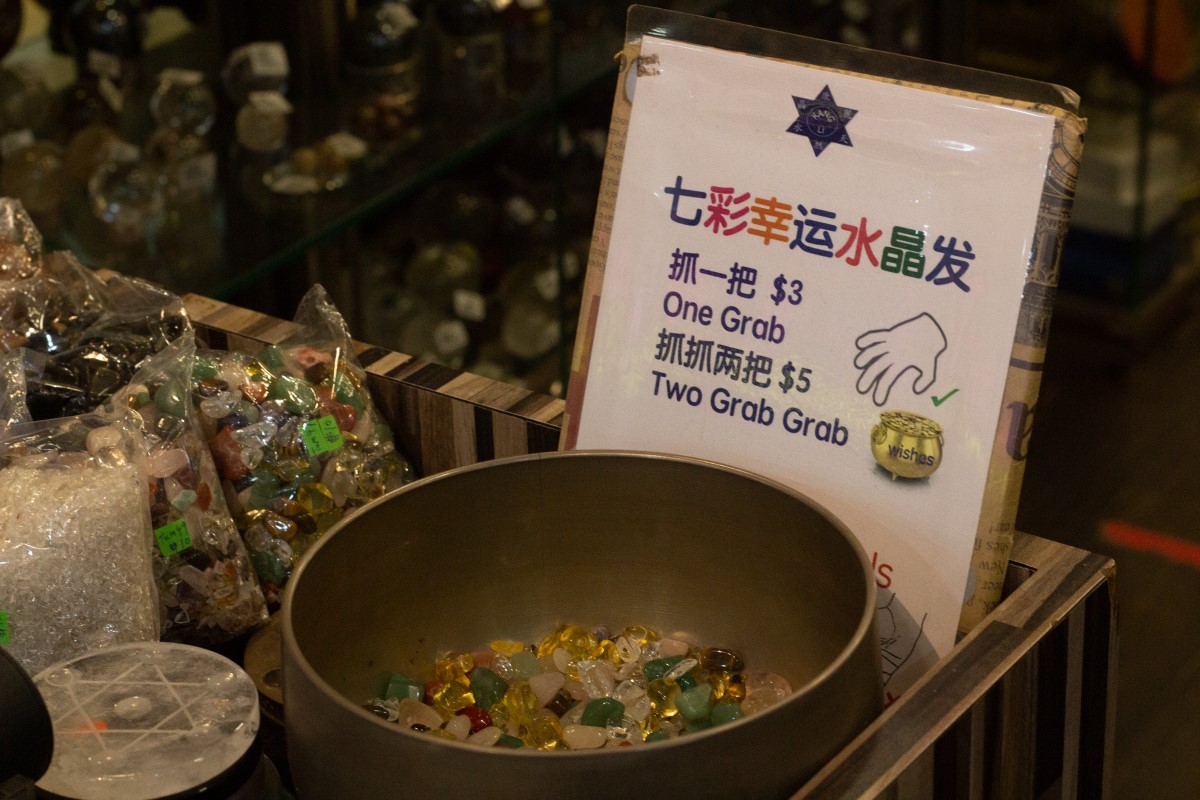 “Boy, want to learn more about your fortune?” a Chinese man in his mid-50s asks, his body draping over a red plastic chair under a New Moon abalone umbrella stand beneath the scorching sun.

He is dressed in a creased, loosely-buttoned chequered shirt and carries with him a demeanour far too frivolous for what seems like a life-defining consultation.

Anyone who has walked the intersections of Rochor Road and Waterloo Street would know that this man is not here unaccompanied. Along this stretch lies a handful of fortune-telling street vendors who claim an ability to see the future.

The area, known as Singapore’s spiritual haven, abounds with ways for people to seek solutions to their problems, whether it be through places of worship, lottery number predictions, or even palmistry consultations.

Here, fate outrules the laws of science, as astrological references form the basis of fortune predictions. Vendors set themselves up as experts in pseudoscience, displaying terms like ‘financial pursuit’, ‘lucky directions’, and ‘future predictions’ that tease passersby with seemingly concrete solutions for a hopeful future.

As Singapore wades through multiple waves of the pandemic, the number of peddlers at Rochor has been dwindling. Yet the magic of new age spirituality, which is perpetuated by the metaphysical community, persists within the compounds of Fu Lu Shou Complex, a mall famed for peddling sacred objects, such as protection amulets and lucky charms.

Known for their healing proponents, these objects offer a glimpse of hope to those seeking solace and stability in times of stress, as they invite good energies and repel bad luck.

While many have contested these objects to be mythical, scientific criticism has done little to dampen interest in their purported magic, and they have assimilated into the lives of everyday Singaporeans as dependable conduits of comfort and reassurance.

Usually, they attract a niche community of older-fortune-seeking uncles and aunties, typically in search of objects that are tangible sources of protection and luck, like a 49-centimetre tall amethyst geode cave to bless a new home or a green aventurine necklace for prolonged prosperity.

In a time when anxieties are at an all-time high, people of all ages are starting to take interest in these objects, as they become equally desperate for ways to improve their well-being. They turn to crystals to seek respite and obtain a sense of connection—that something meaningful exists beyond them and they have the power to control their lives with it.

Treasured for their healing effects as much as their mystical hues, these enigmatic stones are said to have energy-altering benefits ideal for curbing the stifling home environment or issues with one’s mental well-being.

Clear quartz is believed to aid concentration, obsidian claims to clear out emotional blockages, and rose quartz is entrusted to provide comfort in times of grief.

Searching for the ideal crystal, however, is akin to fate, says a female sales executive at Kang Li Mineral Kingdom. Coming with 26 years of experience recommending crystal products to a myriad of customers at the shop, the lady shares how owners are chosen by their crystals instead.

“Usually it depends what properties our customers want and needs. We need to know what their conditions are to know what crystals to introduce to them,” she says, as she plops a stack of manuals with faded front covers and dog-eared pages at the counter, readying herself for a barrage of questions.

From the constant stream of customers, Kang Li Mineral Kingdom appears to be a favourite among its competitors on the ground floor.

The 33-year-old shop shows signs of its age – its bohemian-looking interiors are plastered with yellowed newspaper clippings of their past events against a backdrop of Mandarin trot classics. Crystals of all types and colours can be found at all corners of the shop, some priced as low as S$2 a single stone, to necklaces and bracelets costing around S$30.

“You see, we cannot change our lives or our bodies, but we can use crystals to change our fengshui to get the best alternatives for ourselves,” she says.

She explains how each type of crystal works very differently based on an individual’s physical energies, stressing the importance of finding a crystal that best caters to their specific needs.

To achieve positive effects, believers are instructed to either place crystals at strategic locations of a confined space or carry these trinkets wherever they go, to help facilitate the flow of good energy, or Qi, which describes the energetic forces between a person and their surroundings.

But for healing powers to work, believers have to trust the energies these crystals bring, and go with their gut feeling when finding a crystal that catches their eye, the sales executive adds.

“Crystals give us energy. It’s not like any t-shirt. It’s about finding what’s most suitable for you, so you have to go with what you like. Because they follow your body’s energies when you wear them.”

Not an auntie hobby anymore

Crystal healing is no new phenomenon in Singapore. Having made its inroads back in the 1960s, it has often been seen as an auntie’s hobby to many.

Contrary to popular belief, however, crystals are adopted by people of all ages, she claims, as she has met customers in their twenties, many of whom are drawn to its rarity, being objects that are one of a kind.

Coupled with their oddities, what was once a hobby for hippy-dippies is slowly turning into mainstream interest, as more people are entranced by the mysterious effects of crystals.

In addition, it is much easier to adopt crystals as part of one’s lifestyle now. The abundance of resources on new age spirituality, offline and online, are encouraging the ‘pursuit of a customised spiritual experience’, said researchers from the University of Stirling in a 2014 study about the challenges of a spiritual marketplace.

Individuals are no longer limited to a singular source of faith and are at the expense of handpicking spiritual elements that tailor to their immediate needs.

With this knowledge, the magic of crystals is no longer confined to physical shops alone. Gone are the days where buyers scavenge for crystals and their tingling vibrations from a trip down to Fu Lu Shou Complex—many are venturing into online marketplaces like Etsy and Carousell, which are appealing to a burgeoning community of crystal believers to buy and trade crystals online.

“It was quite intense when I first started. I saw how the pandemic attracted so many new crystal seekers out of the blue, most likely because they couldn’t travel,” says crystal collector Yolee Wong, in response to the overwhelming number of online crystal shops that have sprung out of the circuit breaker.

The 27-year-old is among those who have started building their collection then. She explains how her first and only encounter at a physical crystal shop was when she was 15, which happened during a trip to Marina Square with a friend.

“I still remember vividly when I was there choosing my first crystal. The shopkeeper told me to look out for one that called out to me, and that I’ll know it once I see it,” she recalls.

However, Yolee still finds physical crystal shops intimidating and has only bought crystals from online platforms such as Instagram and Etsy, albeit with some research.

“Some sellers do try their best to educate their customers online, but after a while, you can start to differentiate who’s lifting information from Google and who truly knows their stuff. It’s a lot of trial and error I suppose,” she says.

Another crystal collector, Chew Jing Yi, first got in touch with crystals as a child as her parents collected and displayed them at home. The 21-year-old student recalled watching an Instagram Live where a crystal seller used a pendulum to determine the likelihood of a crystal “following their buyer home”.

Magic on the basis of trust

Naturally, sceptics would be quick to call it bogus, given the little scientific evidence to substantiate its effectiveness.

Experts, however, believe magical objects like crystals can be helpful for people so long as it benefits their individual spirituality.

German Physician Edzard Ernst, an alternative medicine academic from the University of Exeter, says in his book on the analysis of complementary medicine that any object or stimulus can easily count as a form of new age healing in today’s world.

What matters most, he explained, is the self-evaluated effect it has on an individual’s sense of well-being. And because they only aim to heal and not cure, most forms of alternative medicine only appeal to people intuitively, never scientifically.

This provides room for subjectivity, allowing explanations for these unexplainable stimuli to be mythic and varied.

With the healing trajectory of crystals centred around abstract conjectures of vibrational frequencies, the onus is on sellers to impart their knowledge to customers. It is then up to the discretion of buyers to decide whether any of it is true.

This is based on the resources she has, which include remedies like charging with moon energies on a windowsill at night or burying them in the soil during the day.

But the 26-year-old thinks there is no way to certify whether any of it is, in fact, true.

“There are certain phenomena that science can’t explain, so I always tell my customers to form their own judgments,” she says.

A handful of customers, however, claim to be hypersensitive to ambient energies and have experienced prickly sensations themselves when touching a crystal, alluding to its legitimacy as a tool for healing.

Jing Yi recalls how she felt an “itchy vibrating sensation” on her fingers and palms when she first touched an amethyst cave in a shop—an energy exchange so surreal to both her and her parents that they brought the cave home the very same day.

“I don’t have the exact words to explain this, but there’s this feeling you get when you hold on to a crystal that works for you. You’ll know it when it feels right. It’s like a gut feeling,” she says.

Such feel-good abstractions are the hallmark of crystal healing despite the absence of scientific reasoning, and believers seem to be fairly convinced even as these mythical explanations fly in the face of logic. After all, what does science have against the authenticity of lived experiences?

If anything, the magic of new age spirituality reveals the power of human desire and the lengths people would go to obtain a hint of clarity in times of chaos.

Myth or fact, they want to believe something is in control and would like the power to control their lives with it—that magic can exist so long as they choose to believe in it.

Perhaps the ambiguity is what gives the stranded a semblance of closure—a vast horizon that promises a return to order, even if it means having to piece together ambiguous puzzles of their own.

“And if crystals could give them that sense of purpose, then what’s wrong with that? Even if it isn’t backed by science, you will never know unless you’re in the magic.”

This story was first published on Myth and Fact: Singapore Unpacked, produced as a Final-Year Project for the Wee Kim Wee School of Communication and Information, Nanyang Technological University Singapore, for the Bachelor of Communication Studies. 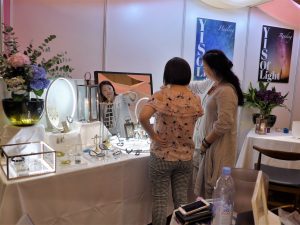 Has Wellness in Singapore Gone too Far? Crystal Whisperers & Palm Readers Tell Us

It's true, angels do send you uplifting messages.