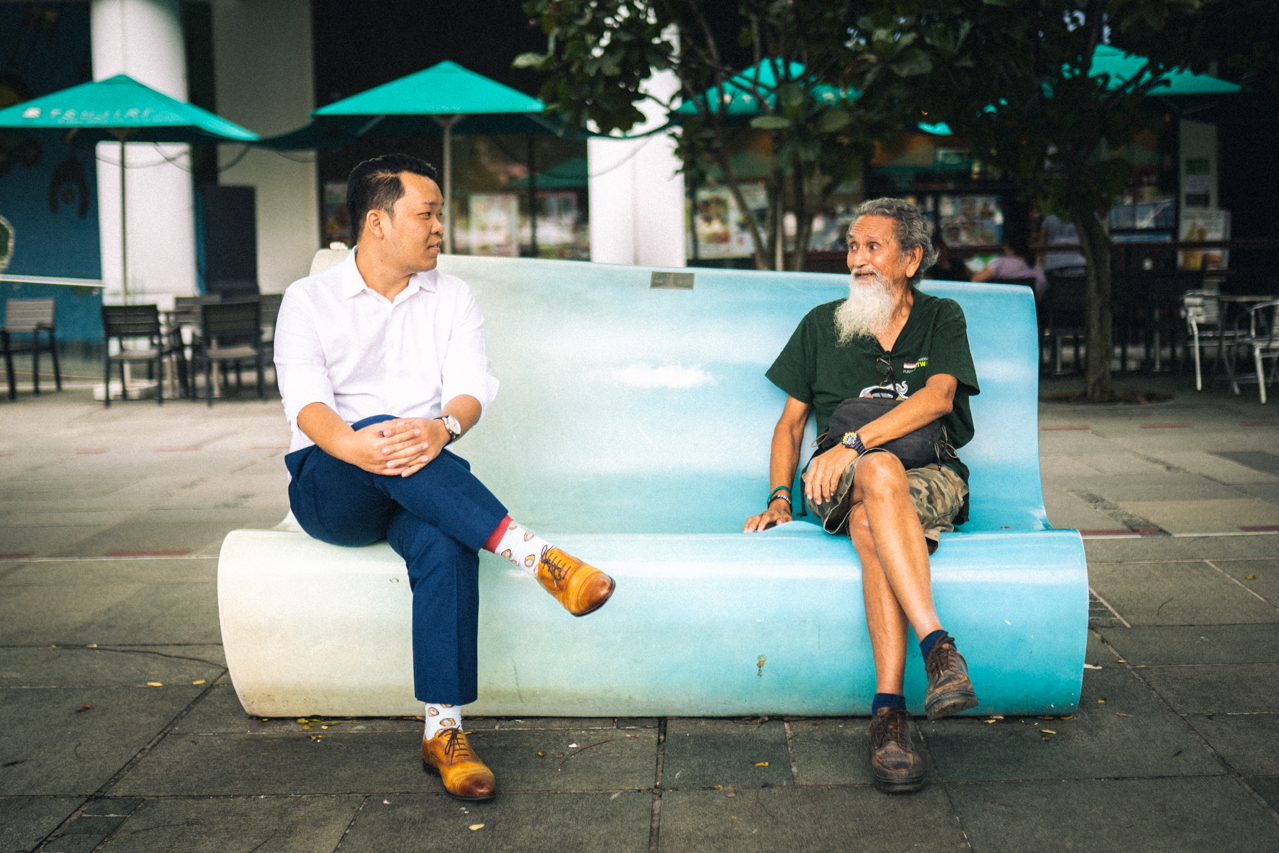 All photos by Zachary Tang for RICE Media unless otherwise stated.

What is the essence of human nature? Or rather, Singaporean nature? That depends on who you ask. Ugly, says the news. Lazy and self-entitled, think some employers. Kind and giving, according to this survey on “graciousness”.

With kiasu-ism closely tied to our national identity (topped with the odd dreary headline of ugly public behaviour), selfishness seems almost expected of us at this point. A quick vibe check of thy neighbours isn’t always positive either.

Heck, Singaporeans hardly ever have anything positive to say about their own kind. To some extent, they’re right. But beyond the bad headlines, there are plenty of do-gooders in Singapore who’ve been quietly sprinkling a dash of good in this city.

They might be a colleague from a different department that always leaves thank-you notes on your table or an unassuming stranger who shields you from the train’s morning crowd. In that case, are Singaporeans truly selfish by nature, or are their good deeds just going unnoticed?

They’re also recipients of this year’s President’s Volunteerism and Philanthropy Award (PVPA) — the highest honour and mark of excellence for those who’ve given back to the community. The former in the People of Good (Senior) category, and the latter in the Leaders of Good (Youth) category.

In other words, they’ve been awarded for, literally, being good people. If there’s anyone more fitting to talk about the goodness of Singaporeans, it’s these two.

Based on first impressions alone, Grant and Ming Xiu couldn’t be more different from each other. Here, take a look.

At 73, Grant sports a long dusty beard and a vicious sharpness behind his eyes. With him, there’s no mincing of words—he often veers into being politically incorrect, though with introspection and never just for the sake of it. Speaking his mind comes to him as easily as breathing.

Ming Xiu, on the other hand, often ruminates over his choice of words. Our conversation is filled with pauses as the 35-year-old takes time to string together his answers. When he does find it, he speaks with a gentle cadence that feels like we’re long-time friends having a catch-up, rather than an interview.

And yet, when asked if they consider themselves good people, they both share the same look of incredulous confusion.

“According to my friends, I’m a nice person…?” Ming Xiu says before his words dissolve into nervous laughter.

Grant doesn’t hold back. “I know I’m doing good, but I’m not good.”

Having dedicated the past 40-odd years of his life to various environmental initiatives and wildlife conservations both in Singapore and abroad, it boggles my mind to see Grant so harsh in his assessment of himself. He says it’s because he’s hard to make friends with.

This is the same man who co-chairs the No Sharks’ Fin movement in Singapore, the man who leads the reforestation efforts in Thailand so elephants can have a wild to return to.

He also volunteers to plant gardens in welfare homes and schools for special needs to add biodiversity among the children. This helps regulate the risk of dengue – by managing natural mosquito controls as predators, there’s a much lower risk of transmission.

I could try listing all the things he dedicates himself to, but he’s been at it for twice as long as I’ve been alive. The People of Good award is dedicated to outstanding individuals who’ve given their everything for the benefit of other communities. In his presence, I can’t think of anyone else more deserving.

I ask what compels him to give to this extreme. He shrugs his shoulders. “Obsession, maybe?” he suggests, before sounding more definitive. “Maybe next [for me] is the mental hospital, I have no idea.”

Anyone can throw themselves into a cause. Not many can do that for decades on end without burning out. Taking him at his word, his obsession with selflessness doesn’t spell a harmful mental condition. But it suggests Grant might feel like a minority.

Considering their age difference, it’ll take another 30 years or so before Ming Xiu can answer that question. Just three years into the founding of ground-up social movement Campus PSY (Peer Support for Youths), his giving journey in the mental healthcare scene has only just begun.

Yes, mental health is the big buzzword today. Despite the cynicism, his efforts have already seen countless youths getting the mental health support they need. As a non-profit organisation, Campus PSY rallies like-minded youths to undo the stigma surrounding mental health.

Ming Xiu once watched a close friend in junior college crumble and retreat into his shell because the world was too unforgiving to those with mental illness. Now, he doesn’t want anyone else to suffer in silence again.

It’s a lofty objective, but Ming Xiu holds on to that goal. “If you don’t try, you never know if it’ll really work out or not. And I want it to work.”

Ming Xiu’s a nice dude, for sure. No wonder he’s being celebrated for being a galvanising multiplier leader. You can’t inspire others otherwise.

So, Singaporeans: Nice or Not?

Back to the question.

Perhaps it’s expected that Grant and Ming Xiu’s views of the general populace’s inherent selfishness/selflessness also sit on different ends of the spectrum.

As a man of faith, Ming Xiu grew up believing in the good of people, and that goodness is something that comes naturally. As such, selfish behaviour leaves him completely baffled. A mention of the general news cycle about unsavoury behaviours observed in Singapore causes wrinkles to form on his forehead.

“You start to wonder why some Singaporeans do what they do,” he says. “ You wouldn’t understand why they’d do that to other people. Maybe it’s because they’re just extremely self-centred, and they don’t give a… a… yeah.”

He stops short of profanities, but the disappointment is palpable. To him, Singaporeans are naturally selfless, and other-centred. Selfishness shouldn’t be the default.

Grant, on the other hand, is a glass-half-empty type of person.

“Do you even see how we talk to people? To cleaners we just–” he pauses to jerk his head and makes a wiping motion. “That’s what we do. We don’t even ask, ‘Can you please help us clear this?’ That’s how inhumane we’ve become.”

“You can never have too much manners, but it’s so easy to have not enough manners,” he quips.

In Grant’s eyes, the current landscape doesn’t look good. But with some nurturing, good can bloom within people the way his flowers have.

Grant’s not a complete cynic, though. He’s also met plenty of Singaporeans whose outlook on life runs in proximity to his.

He speaks of his most regular volunteers with a gentle fondness. As he talks about them—remembering each of their names—as his eyes crinkle ever so slightly.

He speaks of Shaun, a young man so dedicated to caring for others, over a long period, that he’s become a head volunteer under The Green Volunteers.

He speaks of Iris, who has been volunteering with him since her JC days. She’s since become a specialist in a hospital, as well as a mother to a 6-year-old. The kid joins them on the ground too.

Grant doesn’t just think that the people who genuinely care will always find time to give. He knows it.

In a city where its goal is one of rapid transformation, this often leaves out those who refuse to take part in the ongoing rat race.

Looking at his peers who’ve pulled ahead in their fields, Ming Xiu grounds himself by reminding himself why he even chose this path in the first place. He poses the same question he asks his volunteers to himself: “Why do I do what I do?”. He’s here to give, to help, and to make a difference for those around him.

For all the differences in their personalities, they’re similar men of action. Finding that sense of drive involved lots of soul-searching and confronting their reflections.

They’ve asked themselves if what they’re doing can really be considered doing good for others, or if it’s purely for self-fulfilment with little regard for the recipient. After all, inaction will always be the easier alternative, and as evidenced by the people they’ve met, it’s normal to ask: “What’s in for me?”

Why even do good? What even is good?

But here’s the thing. Receiving a PVPA was never the point. They just do it because it feels right.

Because if not you, who? If not now, when?

For Grant and Ming Xiu, that’s really all there is to it.

The President’s Volunteerism & Philanthropy Awards (PVPA) is the pinnacle award and platform to recognise individuals and groups that have achieved excellence in giving. These awards represent the highest honour for giving in the community and are conferred by the President of the Republic of Singapore.