The Curious Case of PetitionsSG — One Step Forward, Two Cold Feet Back 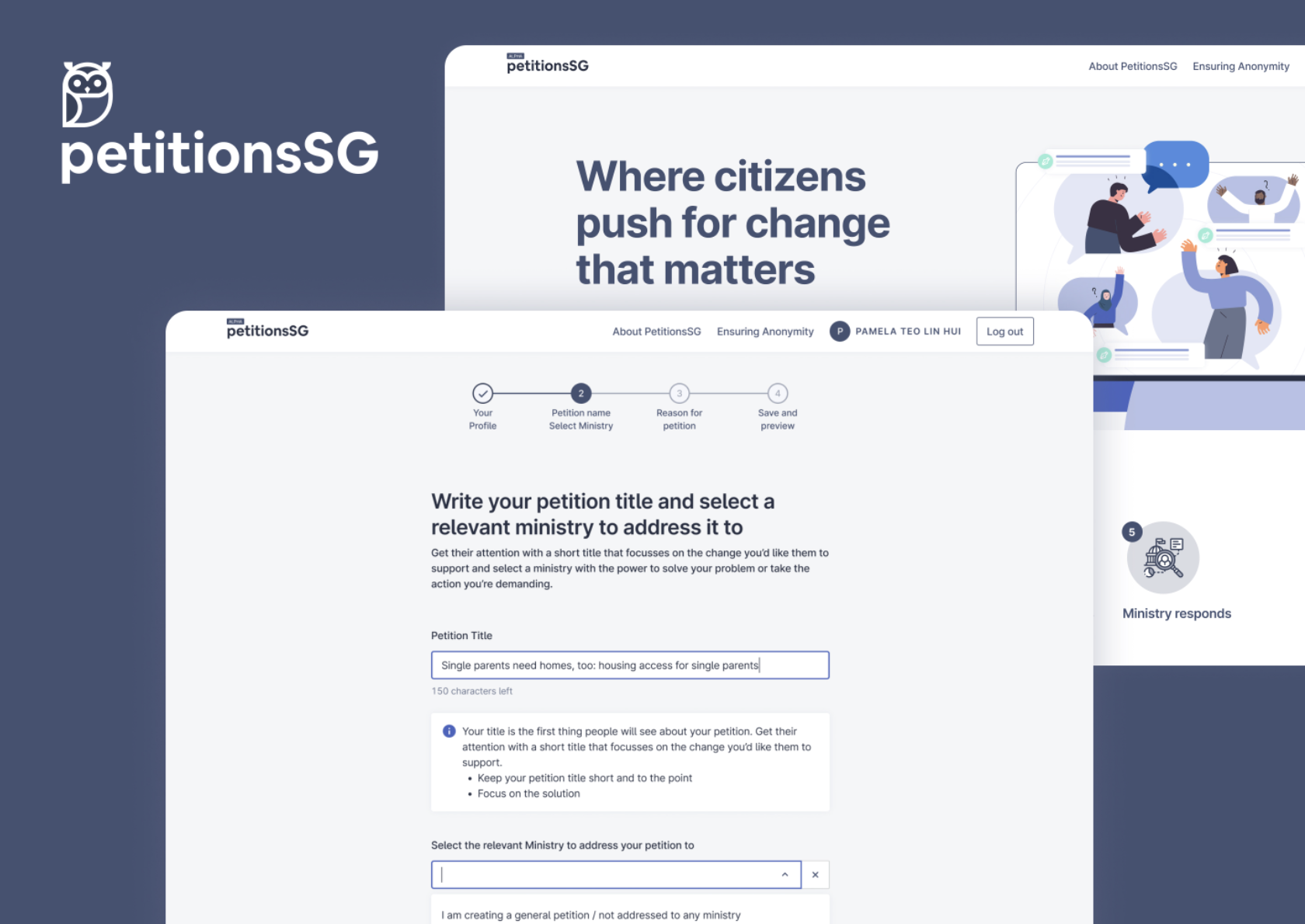 Just over a week ago, progress in Singapore seemed afoot. On 5 May 2022, it was reported that the government was working on PetitionsSG, an official platform where citizens can submit their petitions.

If these petitions garner 10,000 supporters within a stipulated time, they will be submitted to the relevant ministries for review.

Just as other news outlets and publications caught wind of it, on the very same night, the representatives from OpenGov were quick to put out a statement to categorically state PetitionsSG was an “exploratory prototype” that was only for “internal user testing” and “has never been live”. All this within a day of the initial news of PetitionsSG being announced.

PetitionsSG is the brainchild of five engineers from Open Government Products, the experimental development team within GovTech, who developed this idea during their month-long Hack for Public Good 2022 initiative.

According to their website, every year in January, their officers take a break from their non-core projects to work on a public good problem that interests them.

Besides being a learning opportunity for younger officers, if these prototypes have the potential to create value for Singapore, they will be converted into full-fledged OGP products.

This has seen many fruitful results with past projects like Go.gov.sg, Postman.gov.sg, and RedeemSG originating from the hackathon.

It was the hope that PetitionsSG would have the same impact.

PetitionsSG is presented as “a government platform for citizens to push for change that matters, connecting the most important sentiments from the ground to ministries”. For the team, PetitionsSG is built to bridge the gap between people and government.

Furthermore, it is to encourage more civic participation and empower members of the public to advocate for causes they care about, which in turn would help build a more inclusive and progressive Singapore.

Having an official platform for petitions in Singapore is a delicate matter for all those concerned, whether they be members of the public or the government. The features of PetitionsSG aimed to get around the issues surrounding these “pain points” for a more efficient petition process.

Given that PetitionsSG is a government platform, this can work for and against PetitionsSG, as noted by the team. As an assurance for citizens, PetitionsSG offers users the choice to be anonymous.

Drafting a petition was straightforward. Log in with your Singpass, get the petition endorsed by three other people, and publish it on the site. The petition will be open to the public. If the petition receives 10,000 signatures within 180 days, it will be submitted to the relevant ministries. The ministry will have 90 days to respond.

There were, of course, a couple of possible shortcomings to PetitionsSG, such as the petitions getting rejected if they “receive significant reports against them”. It is unclear what constitutes these reports or who would be the one vetting them.

This attribute of PetitionsSG would undoubtedly result in a significant roadblock for more controversial petitions with polarising viewpoints. We also have to appreciate that PetitionsSG is still very much in its infancy stage, and there would be more tweaks needed to smooth out these initial kinks.

Missed opportunity for the government

As much buzz and hope PetitionsSG generated, it was swiftly dropped before the idea could be fully realised.

It is difficult to ascertain the reasons behind this hurried abandonment seeing as there was considerable research and interviews done for the report on PetitionsSG. Still, the situation is strange, seeing as there was even confirmation from the senior engineer, Alwyn Tan, on the project.

Either way, this turn of events is a missed opportunity by the government to take that vital step forward of active citizenry. This supposed cold feet of PetitionsSG puts us back at square one or, even more pessimistically, that we haven’t moved.

Petitions are by no means a cure-all; we have seen our fair share of petitions in Singapore with varied success.

A more serious critique of government policy would have been the outcry against the Graduate Mother’s Scheme in 1984. The scheme gave significant tax cuts and incentives for mothers who were university graduates or mothers with ‘O’ level passes, while mothers with lower education qualifications would be given grants if they underwent sterilisation.

Petitions circulated at the National University of Singapore gathered 3,000 signatures paired with a student-led protest at Nanyang Technological University. This, along with spirited forums and discussions, led to the Graduate Mother’s Scheme getting tossed.

Whether due to petitions or other reasons, these petitions allowed Singaporeans to be heard and feel like their voice mattered. It is also important to note that these petitions were only “successful” with policies that were not implemented yet.

Petitions were also effective with decidedly ‘lighter’ issues such as doing away with NDP fun packs and SIA’s environmentally unsound Flights To Nowhere Plan. With more serious and significant issues such as allowing Muslim women to wear their tudung at work, petitions are a helpful first step to shed some light on the matter. Still, it takes years and many petitions later to engender the same success as those ‘lighter’ issues.

Understandably, the concern of a state-sanctioned petition platform would be opening the floodgates leading to unbridled ‘protesting’ and possibly leading to unrest in society.

When the engineers approached ministry officials about PetitionsSG, they asserted that “the Singapore government does not rule by numbers”. Indeed, important decisions made in government should not be made because of numbers alone.

However, the benefit of PetitionsSG is not to sway government decisions on a whim but to crack open that line of communication, no matter how small, and establish a space for dialogue.

As evidenced in PetitionsSG’s findings, while government officials feared a platform like this would promote antagonism, citizens felt differently—“They perceived the platform as a step forward for Singapore, seeing hope in a more collaborative process to tackle the more complex issues that Singapore faces and would face”.

A symptom of a larger problem

More than a missed opportunity, this incident with PetitionsSG is a symptom of a more damaging issue at hand.

While the government has shown that they are more open to discussing thorny topics such as race, inequality, gender, and LGBTQIA+ issues, it is always on the government’s terms.

Prima facie, it might seem prudent and progressive that the government is making a move to actively discuss these sensitive and pertinent issues. While this step is laudable, it belies how the government will always have and insist on the upper hand in shaping and controlling these socially controversial topics.

In the case of PetitionsSg, the sudden backtracking of the platform can be read as a response and a refusal to relinquish their authority and control on these issues.

This is even as these conversations permeate every part of our social fabric and demand more robust discussion, especially at a parliamentary level.

With the government’s insistence on dominating the conversation and dictating when the conversation can happen, the entire exchange becomes wholly one-sided and reduces the efficacy of having these dialogues in the first place.

Despite PetitionsSG being torn from the drawing board, the silver lining of this debacle is how young people are endeavouring for change, especially within government organisations. There is a desire to improve existing protocols to encourage more citizen participation.

However, on closer examination of the study, there are nuances in the respondent’s interest levels. When questioned about specific topics like state surveillance, Singaporeans did take a vested interest and even disapproval with the government.

It stands to reason that while the sentiments towards policy and politics are passive at best, they can improve with time and more accessible resources. However, without this first step, it is almost impossible to spur any kind of vigorous discussion and even maintain the status quo of politically apathetic Singaporeans in generations to come.

We might never know what happened to PetitionsSG and whether the idea will be revived or some other version will emerge. Seeing as this was conceived in Open Gov, it is the hope that more ideas like PetitionsSg will spring forth. Until then, we can only wait with much anticipation.