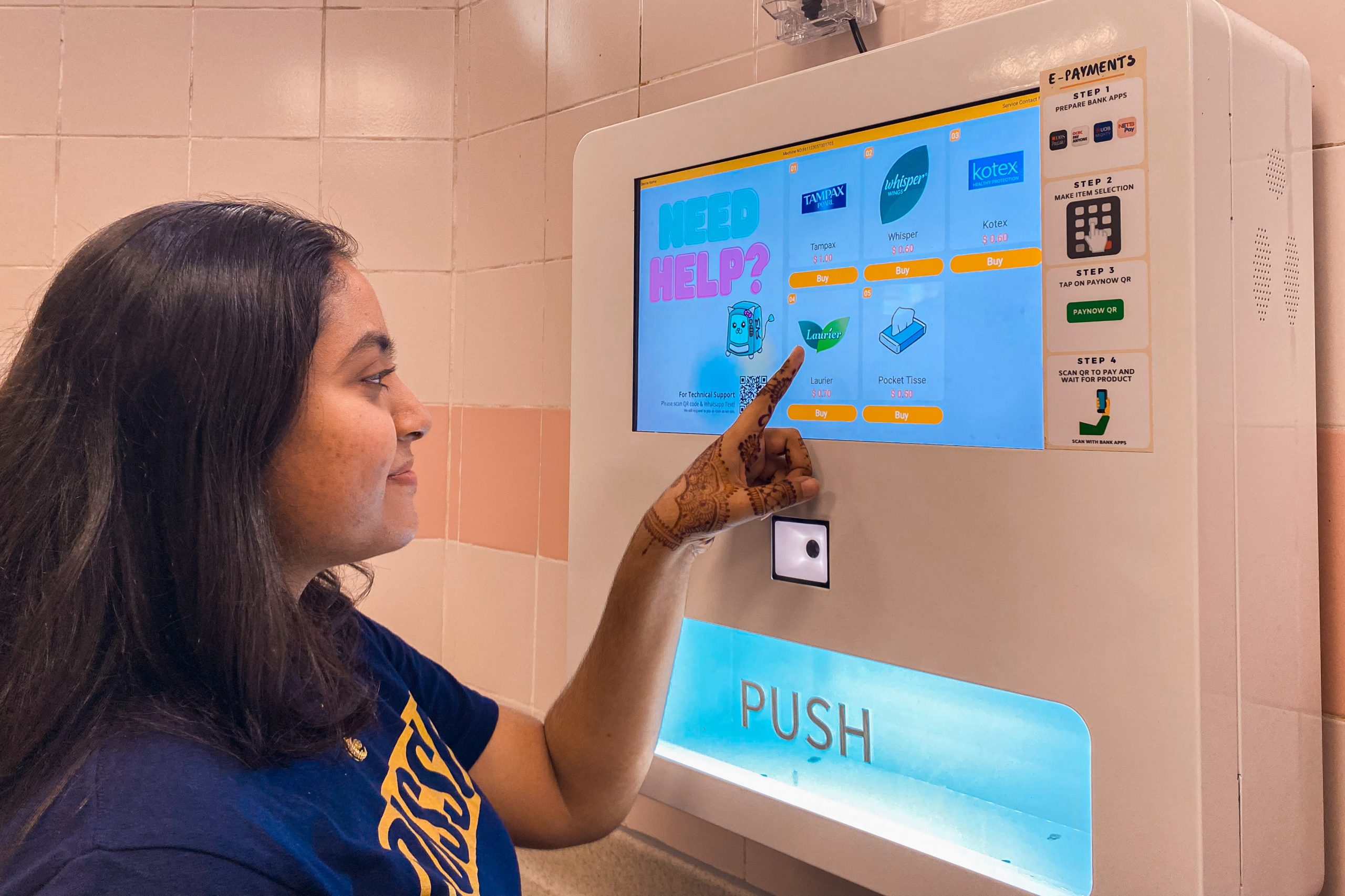 “If you think something is right and can benefit the greater good, you just do it. Especially with this project, you don’t have to be a woman to do it,” asserts Lee Wei Yang, 24, of the National University of Singapore Student’s Union (NUSSU).

Aside from wading into the thick of political theory and international relations as a political-science major, Wei Yang served as the Director of organisation development and was previously the Deputy Student Welfare Secretary for Retail and Dining from 2020 to 2021 at NUSSU.

Of the many improvements NUSSU has made on campus, this is one change that took almost a year to see fruition. An initiative like this bodes for inclusivity and is praise-worthy, albeit long overdue.

Still, as far as we know, NUS seems to be the only university to implement an action plan as intentional as this one.

As Wei Yang shares, the road to 100 sanitary vending machines was not a short or straightforward one. The path was replete with Covid-19 supply chain disruptions, university bureaucracy, and tedious processes to work through.

Now, this high-tech touch-screen-ed, cashless payment-enabled vending machine can be found in 100 female toilets across NUS and is hopefully only the beginning of such inclusive practices.

Striking When the Time Is Right

An idea like installing 100 sanitary vending machines campus-wide doesn’t happen as quickly as you think it should.

Wei Yang shares that the success of this proposal was a confluence of many factors that had to do with the government leading conversations on women’s development and NUSSU’s second female president Wee Su-Ann leading the charge.

When the government was gathering feedback on the Women’s White Paper, some student unions were also working on the joint university report on student sentiments on women’s development.

Su-Ann convened a woman’s task force at NUSSU to work on this report. At the same time, she was also in talks with the Vice President of the NUS Law Club, Jolene Gina Abelarde, about proposing the installation of sanitary machines on campus.

“Su-Ann thought it was the right time, with these ongoing conversations about women’s development and the formation of the task force to put the plan into action,” says Wei Yang.

“I thought it was an excellent initiative for the Student Union to push because the majority of the people on campus are students and would benefit greatly from having sanitary products readily available,” says Wei Yang.

Periods can be fickle things, as he has learned, and those who menstruate can sometimes be caught unawares or need a change of pads or tampons when they spend long hours in school.

Instead of having to trek across campus to a convenience store, now, you can quickly get these products in the toilets.

“Furthermore, it was a good opportunity for the Student Union to show we are attentive to these matters, even though belatedly,” adds Wei Yang.

Getting The Idea Off the Ground

Together with the Jolene, Wei Yang co-wrote the proposal to install these vending machines in female toilets. While writing proposals might be arduous, this, he shares, was not the hard part.

“I​ think the most tedious part was trying to justify to the university what we’re trying to do,” says Yang with a nervous laugh, “because we can’t possibly install 100 sanitary vending machines willy-nilly, and out-of-the-blue.”

He explains that installing these machines is very expensive and a cost NUSSU couldn’t bear on their own.

“It requires a lot of funding,” says Wei Yang. “We needed to put across a strong case to the Provost and the school to provide us the funding, which they did, and we’re very appreciative of.”

He is tight-lipped about the exact cost of machines, but mentions the total cost is upwards of six figures for the 100 machines.

After approval from the Provost came the tendering process, where NUSSU got tenders to bid for the machines to be selected.

“There were a couple of options, so we had to weigh the costs of and measure it against the capability of machines and how durable they might be,” explains Wei Yang.

Together with the University Campus Infrastructure’s Campus Life Team, they had to check whether the existing infrastructure of the toilets could support these machines. For example, they needed to check if there were enough power points and whether the machines were waterproof.

Not to mention, these checks included any infrastructure changes to the toilets that needed to be made as well. All these essential checks, coupled with the disruptions in the supply chain meant a year of waiting for everything to come together.

After selecting a suitable vending machine, these compact devices are then drilled into the wall. Besides a touch screen and cashless options, these machines also offer a variety of products for light and heavy days. The machine even dispenses tampons.

These sanitary vending machines also display the number of products they have in stock.

NUSSU was thoughtful and intentional about how they selected their toilets too. “We selected toilets which were strategically located so every faculty will be well-equipped,” says Wei Yang.

“We looked through the whole list of toilets on campus and manually picked out the 100 we thought were in a good location and most accessible to students and staff.”

A Man in a Woman’s World

In matters pertaining to women’s health, Wei Yang was treading on unfamiliar ground. It wasn’t lost on him that he is not the primary demographic for these vending machines.

“Before this proposal, I did not think about this issue at all,” he mentions, “I never knew that such things (sanitary products) are important or even that such machines even existed in the first place.”

For Wei Yang, this means there must be more diverse voices in NUSSU and anywhere to bring up different ideas that can affect such positive change,  citing that Su-Ann was the spark that ignited this idea.

Since the machines have been installed, the on-ground feedback has been positive. He recognises how organisations such as NUSSU can shift the needle to affect change in the university.

It’s a heartening move by NUSSU and one I wish had been implemented when I was in university. In 2022, it shouldn’t be as surprising that sanitary products be made more accessible, but it is certainly a step in the right direction. The other Singapore universities should follow suit.

“As the Student Union, we’re supposed to serve the undergraduate population, and if there is anything that benefits the population, then we should push for it. No one else has the power, the leverage, and capability to fight for it.”

If you haven’t already, follow RICE on Instagram, TikTok, Facebook, and Telegram. If you have a lead for a story, feedback on our work, or just want to say hi, you can also email the writer at nicole@ricemedia.co.