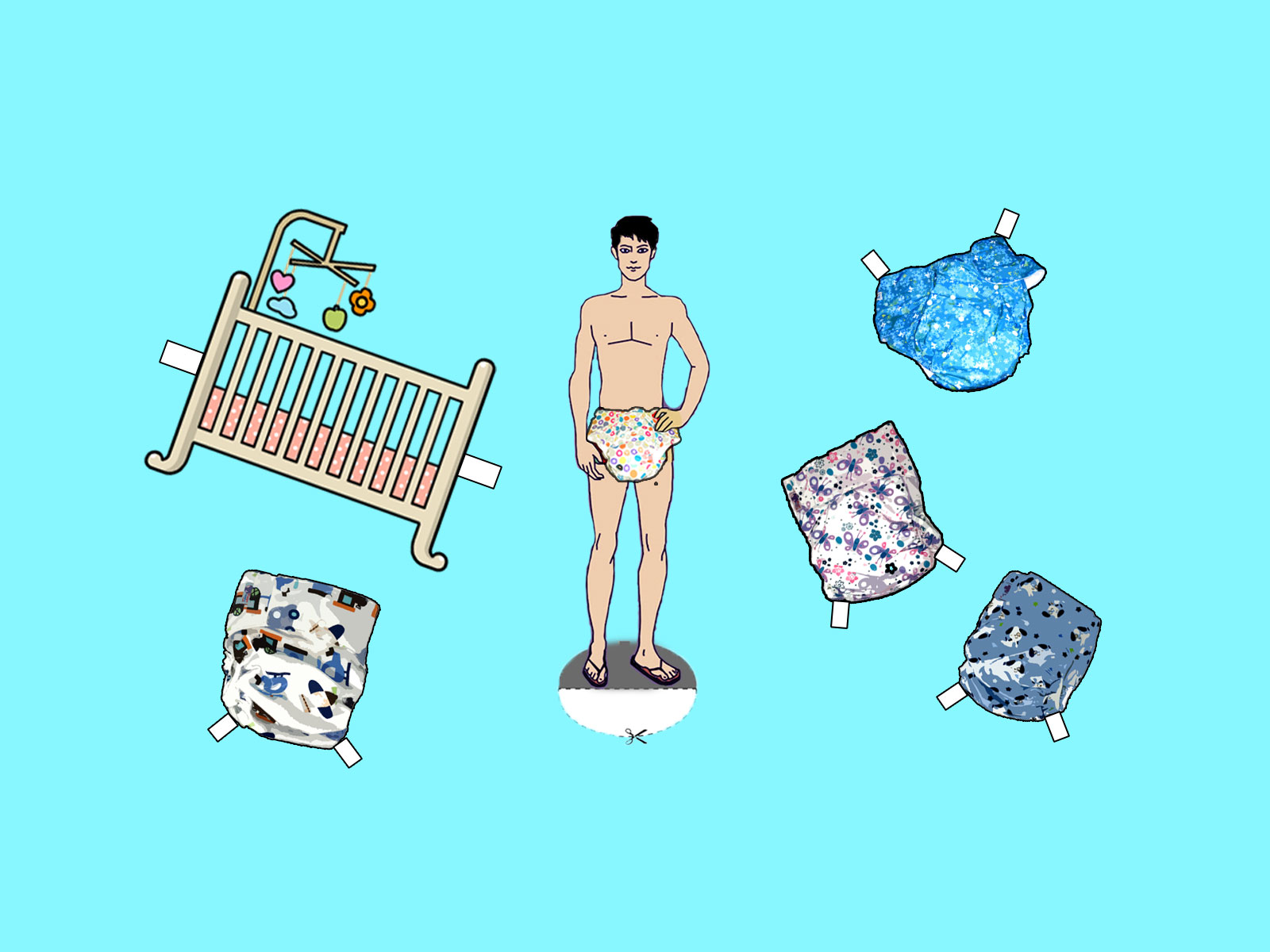 For the past decade, 25-year-old Selv has harboured a secret. It looms large in his existence everyday, ensuring that he never finds true love, the one thing he yearns for.

Selv is a Diaper Lover (DL).

DLs are a subgroup of the Adult Baby Diaper Lover (ABDL) community, which is commonly categorised as having paraphilic infantilism. Wikipedia also describes this “sexual fetish” as “adult baby syndrome”, where an adult is involved in “roleplaying a regression to an infant-like state”.

To the average person, who has only been exposed to ABDLs through exaggerated representations in the media, being an ABDL isn’t a mere bad habit, like cutting toenails on the bus. In the mainstream narrative, ABDLs are freaks.

These are dysfunctional adults who dress up as babies to satisfy some inner desire. They are also portrayed as being severely unattractive. Inevitably, there’s deep shame and stigma attached to the community.

Selv, who is a university student, shares, “Long before I found the ABDL community, I knew I was odd for wanting to wear diapers and to see others wear them too. Coming to terms with being an ABDL didn’t resolve my wish to see others in diapers though. I didn’t need anyone to tell me this was not usual, it is very obvious.”

He is aware that if anyone found out he was a DL, he would be ridiculed.

For this precise reason, he refuses to meet in person, only agreeing to communicate via email, on the condition that I don’t try to hunt him down and reveal his true identity.

Being a DL is not a disorder for me, since it doesn’t impede my daily activities.

There isn’t a particular incident that sparked Selv’s realisation that he was a DL, but he admits it “clicked into place” 10 years ago, when he looked up ‘diaper’ on Youtube and stumbled upon an entire online community of folks just like him.

Attempting to pinpoint the exact moment his life changed, he says, “Asking why I’m a DL is like asking a Javanese person why they are Malay, and expecting them to say that they have always liked the Boyanese attire. There may not be a solid reason or even starting point. I guess I once tried to squeeze into an old diaper in my grandmother’s house.”

That said, infantilism itself is not genetic, even though it can stem from genetic reasons, such as having a small bladder.

He posits that if he ever sought a professional diagnosis, he might be labelled as a Diaper Fetishist.

While one can be either an AB or DL, it is likely that most ABs are in fact DLs too. The converse isn’t true, says Selv, which explains why he isn’t an AB.

“ABDL is a sensitive term, but in general, we do identify as ABDL. It’s like how a Chinese person doesn’t state their Hakka-Teochew heritage and simply calls themselves Chinese,” he says.

Over email, Selv’s responses are nuanced and eloquent, painting a picture of his community that contrasts the overly simplistic portrayal in the media. Although he delves into society’s abject rejection of his fetish, he doesn’t fish for pity or sympathy.

Any emotion, if at all, is conveyed in a measured tone, as though he has accepted the implications of being a DL.

One consequence of being an ABDL is quickly realising how isolated you are. Selv himself isn’t aware of any other Indian in the community, making him a minority among minorities.

He recalls that being bullied in primary school made him a “loner kid with almost no friends”. Not having anyone to turn to from young, he’s become self-reliant, developed a keen self-awareness, and learnt to be comfortable with being alone.

This empowered him to walk into a store, at 15, to buy diapers after discovering he was a DL.

Because of his introspective nature, Selv doesn’t take offence when I note that I’ve seen ABDL being described as a disorder. Instead, he takes the chance to explain to me how I can discuss the label sensitively.

“I’d say that being an AB is a lifestyle. One could return home from work and put on footed pyjamas, hug their teddy bear, wear a diaper and drink milk from a bottle,” he says.

“It’s harder to justify being a DL as a lifestyle, whether we treat diapers as a fetish or security blanket. But it’s not a disorder for me, since it doesn’t impede my daily activities.”

Unfortunately, it is human nature to associate these ‘peculiar’ lifestyles with more sinister roots. Unfavourable impressions of the ABDL community are rife, making it difficult for ABDLs to come out.

For example, ABDLs are often stereotyped as paedophiles, because of the perceived link with children. In fact, the label has absolutely nothing to do with children or minors, and “[the community] actively shuns people who are involved with them”. Many support communities “explicitly ban minors and chatter about sex”.

He acknowledges that there are ABDLs who grow up experiencing abuse, want to relive their childhood, or crave the attention that a caregiver provides. Sometimes, he says, the path to becoming an ABDL begins with something as simple as cuddling one’s stuffed toys every night.

Once the curiosity is piqued, these individuals continue to indulge.

Now, Selv wears diapers four to five days a week. After he puts on his diapers at night, he takes them off in the morning. He also stays in his room once he wears them, engaging in the “usual” activities of a university student, such as surfing the internet.

His other “mainstream interests” include photography, videography, solo travelling, and cracking terrible jokes.

No matter how ‘normal’ Selv seems to be, he never lets me forget, “All that matters is whether I think I am different. And unfortunately, yes, I do have to agree that I am.”

ABDLs are often stereotyped as paedophiles, because of the perceived link with children.

No one can blame Selv for being hyper cautious about letting people into his life.

According to Selv, our society’s narrow-mindedness means we reward conformity and normalcy.

He fears that his future wife would never accept him wearing diapers, let alone want to wear them herself. Should he be so lucky to find someone who does accept him, he worries that she’d tell another person about him being a DL—a prospect that fills him with endless anxiety.

“The potential for rejection and humiliation has always kept me from pursuing a serious relationship. I’ve been praying for a long time for a solution,” he says.

Selv’s answer reminds me of “Pray the gay away”, a common refrain used by conservative communities to get homosexuals to ‘repent’. He may share that he has embraced who he is, but these occasional answers reveal a quiet, constant internal struggle.

Selv’s complicated love life isn’t the only hurdle. At home, his conservative parents condemn his behaviour, and have labelled it a sin.

When Selv’s father first caught him wearing diapers, he told Selv that others would think he was “weird” for wearing diapers despite not needing them. Inevitably, his father’s shocking discovery has strained their relationship.

“My parents still regard this instance of me wearing diapers as the one (very) dark historical spot on an otherwise clean slate. I have no bad habits, get good grades, and maintain a high standing in the extended family compared to my cousins,” he says.

Despite this, Selv has chosen to take at least part of the blame for his parents’ reactions. After all, he never told them about the sense of security and comfort that diapers brought him.

In the same way that some men look for women to ‘mother’ them, one could argue that perhaps diapers symbolise the affection that he has craved.

He says, “Many tears were shed, mostly by my mother. My father even had a near miss at work on the day he was prepared to confront me. No son would want to see their parents saddened and upset this way. All of this could have been avoided.”

Today, Selv continues to feel apprehensive opening up to his father about everyday issues, even though he says their relationship has become “fine, but not perfect”. As far as his parents are concerned, he has stopped wearing diapers, giving him no real “push factor” to actually stop.

The longest period Selv went diaper-free was about four months during his O Level period. He also recently went three months without diapers during his summer break spent at home.

In the past, attempts to fight his desire to don a diaper have often resulted in him buying diapers then disposing a whole pack out of extreme guilt. This binge-purge cycle, which he claims has passed with his teenage years, is regarded as a symptom among those who haven’t fully come to terms with their ABDL tendencies.

“Maybe, just maybe, I could even wear my diapers outside my room to watch TV and do all the family stuff I do now with them. Yes, my mum would likely utter a comment once in a while, akin to an older child still wearing diapers to sleep, but nothing more. They’d know this is a part of me and accept me for who I am,” he says.

I don’t know Selv’s parents nor their background, but I get where they’re coming from. When it comes to something (or someone) so far removed from the world we’re used to, however, we fear what we don’t understand. Few of us would be able to accept individuals like Selv as our own partner, whom we’d introduce to family and friends.

It’s naive to assume that his parents would have ultimately gotten used to his fetish, if they hadn’t forbade him from indulging in the first place.

Yet if we choose to love someone, we should understand that this love won’t always happen on our terms. A complete lack of judgement might be impossible, but the best we can do is learn to adapt in the long run.

Selv has known this since he was 15. He’s just waiting for everyone else to get it too.