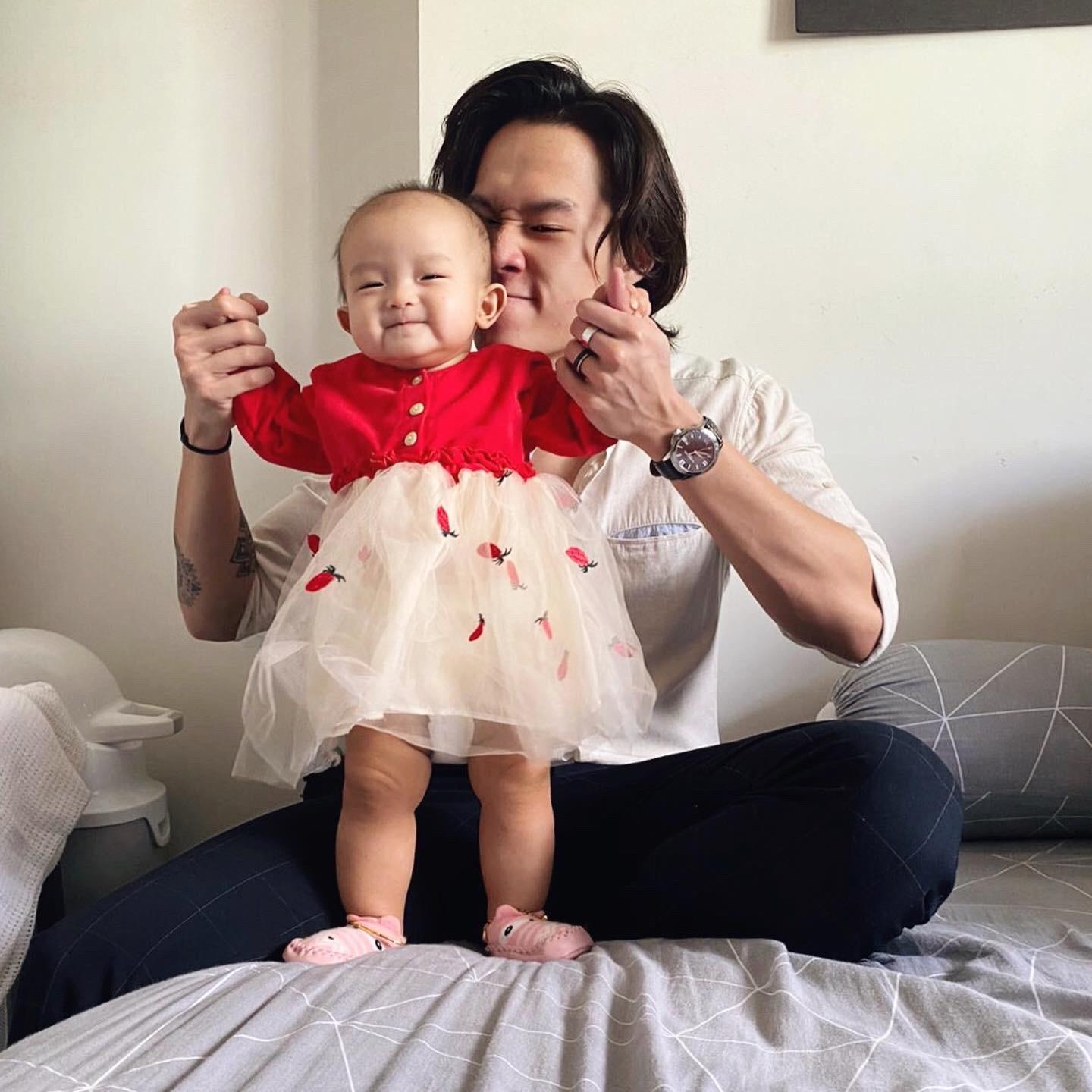 Every morning at seven o’clock, 47-year-old Jasper Chia can be found at his son’s Evan school canteen. Over some prata, he bonds with his son and his friends before they go up for class.

“Before COVID, I was the only parent all of Evan’s classmates knew,” Jasper recalled.  “I would buy prata for all the boys and they would crowd around to watch videos on my phone.”

As a divorced man who only gets to spend time with his son for half the week, Jasper has learned to be there every moment that he can.  “I will go wherever I am allowed to,” he shared. “So if I’m allowed to be in the canteen, then I’ll be there.”

Singaporean fathers increasingly choose not to put their career first

Traditionally, men are the breadwinners of the family. I too grew up with a father that prioritised work and providing for the family. Because of that, when I meet young fathers today, I am often taken back by the amount of time they spend with their children and how they manage to balance family life with their professional life.

Jasper shared with me how his father was a career man, and how he thought that was the norm for Singaporean fathers until he was forced to play the role of both parents after his divorce. “If my marriage hadn’t ended, I would still be that guy that comes back from work, eats dinner with his kids, then goes off again,” he confessed.

32-year old Jon, another dad I spoke to, shared similar sentiments. “My dad has always been very career-driven, always about bettering himself and staying relevant in the workforce. It’s not a bad thing but he missed out on a lot of time with us.”

As a commercial diver, Jon considered taking up opportunities offshore to make more money. But while he was seriously considering it, he eventually decided not to for his son’s sake.

“Personally, I feel like I can earn money elsewhere but I’ll never get back the time I could have spent with my son.”

Research shows that “children who have an involved father are more likely to be emotionally secure, be confident to explore their surroundings, and, as they grow older, have better social connections.”

But while our culture is shifting as it understands that Singaporean fathers need to be more present, many men still struggle to juggle both their work and family commitments.

“You just have to make the time,” Jasper said, remembering how when he was young, his father would carve time into his busy schedule to exercise by telling his colleagues he had client meetings.

“My father would say that without that rule, you will never go running. I do the same for parenting. It’s sacred time. It’s as important as another meeting.”

Discipline is being replaced with guidance

Another experience many of us may remember is being beaten, caned, or slapped for ‘discipline’. And often, this would come from fathers who were the disciplinarians of the family. Jon, for example, remembers getting caned or having to kneel for long periods when he would receive harsh punishments from his dad.

But unlike the way he was raised, Jon doesn’t believe in corporal punishment. He lives by the belief “that kids can be sensible if you show them reason.”

With both Jon and Jasper, I discussed why Singaporean fathers from the older generation saw their role in the family as disciplinary. One of the topics that came up was how men have been traditionally taught that they must be strong and that they can’t show emotion. Over time, this builds up a cold facade that makes it hard for reason and emotional connection to be used as a means to teach discipline.

When I wrote about how Gen-Z Singaporean boys are redefining masculinity, a lot of the boys I spoke to brought up their relationships with their Singaporean fathers. One of the profiles, Jonn, sad he can’t discuss issues dealing with masculinity with his dad, because “he’s just hard as fuck. You can’t crack him open. Any conversation like that he’ll just change the topic.”

Why?  “Repressed feelings, and no outlet to express himself—especially at an age where he’s kind of set.”

But as conversations about harmful masculinity norms are more prevalent now, we are indirectly tackling issues to do with fatherhood as well.

In this vein, Jasper told me that he believes in providing guidance, rather than discipline, to his son. After reflecting on how his own father wasn’t often present when he had to make big life decisions, he vowed to not be that way when it comes to his son.

“I just want to be around if he needs me. And if he doesn’t, that’s fine, I’ll go for a cycle. But if he does, he can always call me.”

Do you know what else often shocks me about modern fathers? How affectionate they are with their children. When I grew up, I don’t remember any of my friends saying ‘I love you’ or sharing any extensive physical contact with their dads. But today, just a walk through a playground proves how much has changed. Seeing dads out with their sons is no rare occurrence, and neither is seeing them hug or walk holding hands.

When I told Jasper this, he joked about how he always gave his son kisses until he got old enough to think it “wasn’t cool.” And similarly, Jon said he tells his son he loves him “a hundred times a day.”

All this is to lead by example, Jon shared. “The fact that [my father] never opened up about his emotions set an example for me. I only realised when I got older that I’ve become very much like him and very often find it hard to express myself.”

Learning from that experience, Jon tries his best to avoid stifling his son’s emotions. “He’s got both masculine and feminine traits in the traditional sense,” he shared, “and we don’t condemn him for any of it. He’s a super emotional kid and we encourage that at home.”

“None of that man up don’t be sissy bullshit.”

When it comes to communication, I was particularly curious about getting the perspective of a Singaporean father with a daughter. Fathers can be particularly overprotective with daughters, which is a double-edged sword, as it can teach them that they need a man in their life for protection, and to accept toxic masculinity. But as the first male role model and first introduction to masculinity, is this healthy?

Leo Heng, a 26-year-old father to a one year old daughter, said that to set a healthy example of masculinity, men need to re-educate themselves about it too.

“I struggled a lot as I never felt like I found my footing as a man,” he admitted. “To this day, it can be a struggle. But I’ve come to realize that becoming a ‘man’ is a never-ending journey. Every phase has its own challenges and you have to learn to enjoy the ride to being your own person.”

As he works on his own perception of what makes a ‘good man,’ he also actively works on creating a healthy line of communication with his daughter. While she is still young, he said he will start with ensuring mental health struggles are always validated and discussed openly in their household.

Is being a modern dad about discarding traditional gender roles?

While toxic masculinity exists, there is also healthy masculinity. For example, being independent and driven are generally healthy traits associated with masculinity. However, if taught wrongly, these too can be harmful.

A recent report on harmful masculinity norms found that traits like self-reliance, risk-taking, and the pursuit of status can be unhealthy if they are expected of individuals solely because of their gender. So these don’t necessarily need to be removed entirely, but being aware of how they can be harmful is necessary.

Jon, for example, believes in raising his son without heteronormative rules so he doesn’t become conditioned to believe he has to act or behave in certain ways to be worthy of respect.

“We teach him that things aren’t girl or boy exclusive. He can wear whatever he wants, he’s been picking his outfits since he was a little toddler,” he shared. “We bought him a pair of sparkly ballet shoes because he really liked them. We had to constantly remind him that it was okay and how pretty the shoes were because everyone around us was telling him not to wear them.”

“Even his teachers would tell him that they are girls’ shoes. But I think it’s imperative that we let kids explore the world and their place in it and just let them be who they are.”