The Surest Sign You’re Now An Adult: No More Cake During Birthdays 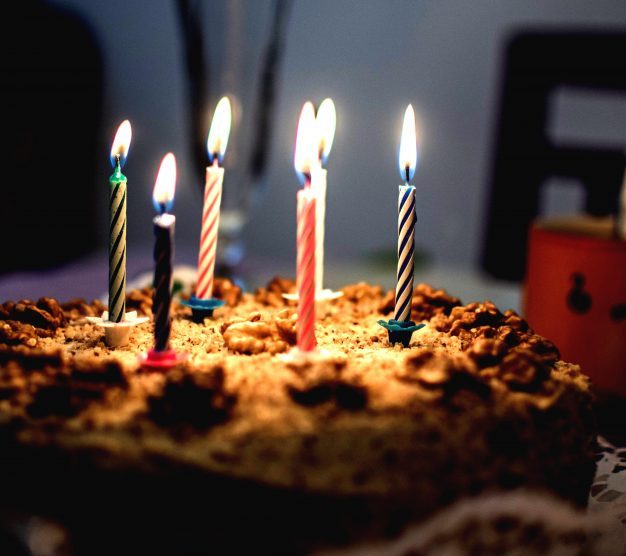 Header image credit: Fotografierende on Pexels.
It wasn’t my first birthday cake, but it’s the one I remember most clearly.

As a small child, I was obsessed with Barney the Dinosaur; capital-O obsessed, with the wild, all-encompassing infatuation only kindergarteners are capable of. I can’t tell you why I was so in love with the toothless purple T-Rex, but a consequence of the affair—on top of the piles of video tapes in the living room, the theme song playing 24/7 in our house, and declaring purple my favourite colour—was that I requested a Barney birthday cake for my fifth birthday.

My mother walked me to the bakery down the road from our house, where I was handed a photo album of options to choose from. I remember the plastic sheets crackling as I leafed through them, debating the merits of frosting colours and chocolate vs. vanilla with great solemnity, while the lady at the counter smiled indulgently.

When my birthday rolled around, I opened the box to reveal a cross-eyed, frosted dinosaur, the same lurid magenta as the original, slathered in airy whipped cream and chocolate rice that barely tasted like chocolate at all. It was tacky and terrible and I absolutely, completely adored it.

Food looms large in many of my childhood memories, but amidst the Christmas turkeys and jars of homemade fish sauce, cake stands out. After the great Barney Birthday Cake of 1998, there was the Awfully Chocolate Cake of 2001/2, the Lana Cake of 2004, and the Bengawan Solo Coffee Cakes of 2007-2009 (we all go through phases).

For my 13th birthday, there was an outing to Bakerzin (how impossibly glamorous they seemed, the single-serve slices with names like Coeur Noir and Sumatra. Who even knew what chocolate ganache was? Or that you could have mousse in a cake?). And, on the years that we got our act together too late or couldn’t really be bothered, a box mix production cloaked in Betty Crocker frosting.

Even when the actual birthday itself didn’t feel like an occasion, there was always, always cake.

In time, this was compounded by my tendency to read anything and everything I could get my hands on. It’s trite to say that reading opens up worlds, but this was how I continued my education in cake.

When it felt like my Harry Potters and Neil Gaimans had been read to death, I turned to my grandfather’s old cookbooks, pages the colour of dark tea and so fragile the corners broke off in my hands. When I was done with those, I moved on to the foreign food magazines my mother kept in teetering stacks by the sofa.

I picked up all sorts of wisdom from poring over these. A Victoria Sponge needs a 1:1 ratio of eggs to fat, and if you over-whip the cream it can be rescued by adding a few fresh spoonfuls and gently beating the mix. Cheesecakes can’t be removed from the oven to cool straight away, because the change in temperature causes the top to crack. German and Swiss and American buttercream, despite being cousins, are vastly different in method and temperature stability.

After this, my relationship with cake was never the same. The natural thing to do with all this new knowledge, of course, was apply it.

By my mid-teens, I no longer really cared about eating cake. The joy was all to be found in making it.

As an introverted, slightly awkward teen, learning how to cook transformed my social relationships. Food brings people together, and there is no easier way to do this than with a box of something you’ve made yourself. Want to win friends and take the cake? Bring the cake.

When I settled into junior college and met my friends—the first people around whom I felt truly understood—the impulse to bake for them was instinctive, almost primal. Baking, in its own way, was a love language. Sugar and eggs and flour are a universal grammar; you don’t need to listen closely to hear the affection behind them.

It started out small, with experiments that weren’t even really cake: trays of brownies, or three-ingredient cookies. From there, I moved on to the basics—butter cakes, chocolate cakes—before graduating to full-blown cheesecakes and cupcakes. Whenever a friend’s birthday rolled around, I could be counted on to be there with a box of some new recipe, organising the surprise like a small military campaign and reminding people to bring a lighter and candles.

Never mind that paying for ingredients sometimes ate up my pocket money; never mind the endless list of other work that needed doing, whether Econs essays or drama club rehearsals. The effort you put into this is the measure of how much you care, I told myself. And if it meant getting up at 5 AM to frost 17 cupcakes before school started, just for the pleasure of seeing V’s face light up, well, there was no question that I’d do it.

But then, without planning for it or even really noticing, I began to backslide.

It probably started in university. With a rickety oven about 30 degrees off the stated temperature, and being too cheap to buy a mixer or weighing scale for my dorm, my projects became simpler; less ambitious. Where I’d once have launched myself into planning a triple layer cappuccino fudge cake, my friends now got one-bowl affairs that rarely seemed to justify the effort of making them.

Then there were the effects of getting older, the first of which was a rapidly decreasing tolerance for sugar. One of the surest signs of adulthood, beyond starting to pay taxes or finally understanding what deductibles are, was that the gummy bears and Kit Kats my friends and I once wolfed down now made us slightly sick.

Then there was how, after 21, no one—yours truly included—really wanted to celebrate birthdays any more. Half the time, they were to be actively avoided. Every year between 21 and 30 was simultaneously a reminder of how much growing up we still had to do, and how little time we had left to do it.

And at the other end of the scale was a more recent development: how birthdays became opportunities for your friends to embarrass you in public.

We’ve all been subjected to this, or organised this or witnessed it: rope in some hapless waiter and make the restaurant suffer through an excruciating rendition of Happy Birthday, while the victim cowers in their seat and pretends to smile. In the face of such pressures, it’s tempting to hear ‘birthday’ and think: no.

And, well, people are busy. Life happens. There are better things to do. Who even has time for birthdays any more?

With these, birthday cake began its slow, quiet fade into the ether.

I bought a packaged cake for one friend, then another, and another. When it became clear that people were fighting to avoid responsibility for the leftovers, rather than over the cake itself, I stopped buying any at all.

Nowadays, birthdays are more likely to be marked with a ‘Happy birthday, have a good one! *cake emoji* *star emoji* *champagne emoji*’ WhatsApp message. As for birthday cake, I haven’t made one in four years.

Which makes me wonder: is the birthday cake a goner? Have its candles been permanently snuffed out?

It’s hard to justify something that seems so marginal, like a childhood relic that should be gracefully left to gather dust. But I can’t help but think that, were the birthday cake to disappear altogether, it would be greatly missed.

I’m not here to moralise about the merits of from-scratch vs. box mix vs. store-bought; honestly, all are legitimate. The point of birthday cake, after all, has never been the cake itself, but what its presence signifies: Look, I got this for you. You are worth making an effort for.

It’s why the memory of my Barney birthday cake stands out, even after all these years. It was the cake that started it all, the first one to demonstrate what food can mean, even if my five-year-old self couldn’t articulate it at the time. No matter how much we insist that it’s unnecessary, or that it’s too sugary/too embarrassing/too much, no birthday cake is ever truly unwelcome. It’s love on a plate. Why would we ever want to give that up?

A full 8-inch double-layered cake too much? Get a slice. Don’t like the birthday song? Don’t sing one. Too nutritionally lacking? Go find a sense of joy.

But don’t give up on the birthday cake. Celebrate it.

I know I will.

This piece was brought to you in partnership with Chope.
As part of Chope’s 8th birthday, they’re giving away the chance to have your cake (and eat it). Simply create an account, play their Take the Cake game, and stand to walk away with prizes like staycations from Andaz, Skyscanner flight tickets, Zalora promo codes, dining vouchers and more!