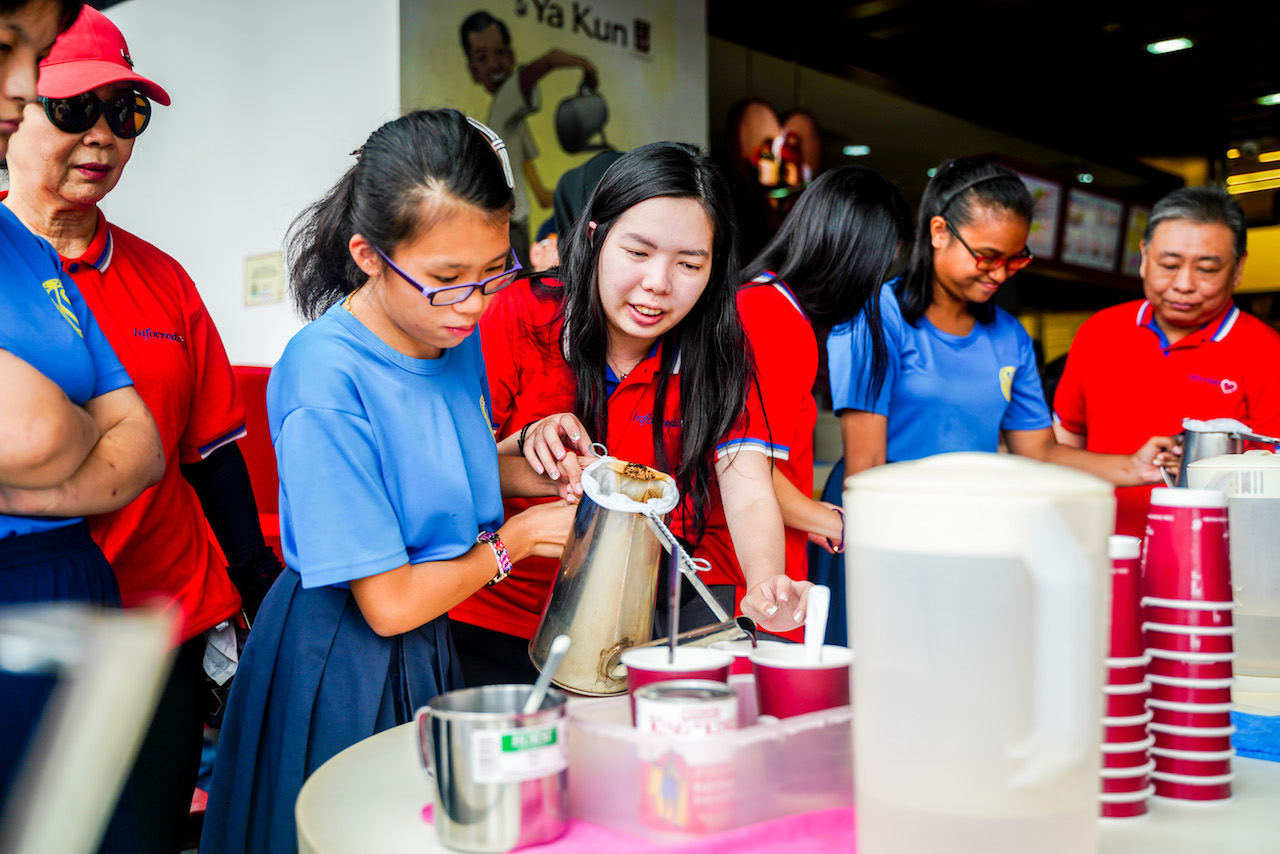 No one in Singapore really knows what a “social enterprise” does.

If you’d told me a social enterprise was a non-profit, charity, or any synonym of ‘initiative’, I’d have gamely nodded along.

As a result, few people have been inclined to give social entrepreneurs the time of day—until now. Since the NTUC social enterprise hawker centre debacle unwittingly thrust them into the limelight, social enterprises finally have the nation’s attention.

So consider this a primer to why we should start taking social enterprises seriously.

A social enterprise is not a charity or a non-profit.

Repeat this to yourself as many times as it takes for it to sink in.

This is what a social enterprise is: it is a business.

If you struggle with wrapping your head around the concept that a social enterprise is first and foremost a regular business, consider the analogy of putting on an oxygen mask in an airplane. Instructions always inform passengers to attend to themselves before caring for their child.

Likewise, a social enterprise needs to ensure its own financial sustainability before it can provide for its beneficiaries. After all, this is Singapore, the “most expensive city in the world”—dedicating your life to being the next Mother Teresa only works if you’re crazy rich or just crazy.

So yes, making a profit and creating social impact at the same time can be challenging. But the reason social entrepreneurs constantly face an uphill battle is because our society doesn’t afford social enterprises the same respect they give to regular corporations. To change this requires a fundamental shift in understanding about what it means to give.

At least this is what Joe Tan, co-founder of Love Action Project, hopes to advocate.

About five years ago, as a regular in the military looking for a career switch, Joe wanted to find a way to give back to society.

He shares, “I first started by calling beneficiaries wanting to help them. Eventually the Kwong Wai Shiu Hospital got back to me. I had to organise a mini carnival for them. In the end, I got 120 volunteers just by asking for help on Facebook. The event was fully funded by the public. It made me realise that there are so many people in Singapore who want to give back, but don’t know how to.”

This formed the basis of Love Action Project, a social enterprise that acts as an intermediary to bring together corporations who want to give back and beneficiaries who need help. Through socially impactful events and projects designed and supported by Love Action Project, corporations are able to get involved with beneficiaries in a more meaningful manner rather than by merely donating to a cause.

The Ultimate Grit Challenge by Infocredit Holdings is one such event where Love Action Project is able to pull together myriad groups in the ecosystem.

This year, the challenge was focused on exposing the beneficiaries from APSN Katong School to various aspects of entrepreneurship. Five social entrepreneurs (Comcrop, Pope Jai Thai, Refresh Flowers, MyBox, and Ya Kun Kaya Toast) set up stations where Infocredit employees could participate in activities alongside the students.

Some activities included teaching the students to pour coffee in the Ya Kun kitchen and creating floral arrangements at the Refresh Flowers station.

The Ultimate Grit Challenge might sound like yet another KPI to tick off Infocredit’s corporate social responsibility to-do list, but Joe doesn’t think that CSR is necessarily ineffective. In fact, creating a company culture where CSR is a priority can actually be the best form of marketing for the company itself.

Often, companies who want to give back are only aware of bigger non-profit organisations. But a significant part of the work that Love Action Project does involves shifting the companies’ perspectives to focus on beneficiaries who are smaller, lesser known, and in need of more help.

Of course, this is easier said than done. Many companies still don’t grasp the concept of a social enterprise. Even though most of them are onboard with Love Action Project’s concept, when Joe starts to talk about charging a management fee to pay for what they do, these companies start to have doubts.

“Our daily challenge is to get continuous business. Companies are usually skeptical. They ask, ‘Why should we give part of our CSR money to you, when we can just give directly to the charity or beneficiary?’”

At the same time, Joe says that social enterprises should reinvent themselves too. Mostly, there needs to be an overall change in perspective in order to be sustainable.

Many social enterprises are mainly concerned with providing services to the beneficiaries, and don’t understand that they need to provide equal value to the corporations funding them. To be sustainable, social enterprises must successfully convince companies that they’re able to do the latter, so that companies are just as willing to get their staff invested in working with social enterprises to give back.

“Slowly, people have realised it’s not just about giving money. It’s about getting all the staff involved. When you just donate money, people don’t feel personally invested. Singaporeans are looking for ways to empower themselves through giving back, and I am hopeful that Love Action project can step in as the conduit to reinforce the importance of giving,” he adds.

Many Singaporeans continue to scoff at the idea of giving because we want to. Instead, we give because we want to receive. Whether it’s through profit or feeling good about ourselves, we expect something in return.

In reality, giving is about sustainable action and long-term investment. It’s not a one-off event nor a guarantee of happiness.

“People think that after giving for many years, they’d develop this sense of belonging with the beneficiaries. But these beneficiaries are human too; the gratification might take a long time to come, if at all. You need to find it within yourself,” says Joe.

“When people start off very optimistic, I’m like, please don’t. They have to be realistic. There are bound to be a multitude of emotions, not just happiness. They have to be prepared to be disappointed as well.”

And when it comes to working with companies, it can sometimes be even more disheartening. When Joe talks to some companies, they first ask him how much he can raise for them. Only when he commits to an amount do they commit to giving him funds to run his project or event. However, he informs me that these funds are only his if he can first raise the amount he promised.

“I tell them that’s a very negative idea of how giving should be. That’s a transaction, and it creates an unhealthy space. When I raised the issue to Minister Grace Fu, she brought up SGCares, which gives people the opportunity to volunteer,” he says.

With this apparent gradual change in mindset, Joe has changed his KPI when he seeks funding. Instead of promising to raise money, he promises to have a certain number of people sign up to be volunteers at the event. Potential partners who share the same vision are easily sold.

In fact, APSN Katong School’s principal shares similar sentiments. Over the two years she’s been at the school, she’s seen that Singaporeans care.

“The opportunity for our students to be attached to companies is fantastic. The companies who come establish a relationship with our students, who form attachments very fast. There’s this company who’s been with us for a few occasions that our students already recognise their staff,” she shares.

“When companies approach us, it’s not about fulfilling a duty for them. They usually want something sustainable, not short-term.”

I decide to ask Joe about a lofty, perhaps foolish, ambition I have for social enterprises. I ask if they can plug the widening inequality gap.

After all, much of the current conversation surrounding the solutions to inequality extols the merits of ground-up initiatives that cater to the underprivileged. On the other end of the spectrum, there are those who advocate for radical changes in policy. But the former might not be large enough to create lasting influence and impact, while the latter takes time.

This is where I believe social enterprises can come in. Since businesses deal with both profit and people, they are in the perfect position to further economic and social progress.

“What we can do now is raise awareness. Even though the landscape of giving is still very raw in Singapore, our millennials are starting to see a different perspective. They’re very open to giving. The only reason they’re not creating impact is because they don’t have money,” says Joe.

“But this is the best time to educate them on having a sense of purpose. So that no matter how much they earn in the future, they’ll give back to society.”

Hopefully, he adds, this will result in more inclusive ways of how businesses deal with things.

For change to happen, society must fundamentally believe that social impact and profit-making are not just equally important, but also interdependent.

Social enterprises have always known that sustainability fuels empowerment. It’s time the rest of us caught up.

Have something to say? community@ricemedia.co / grace@ricemedia.co.
Share to
Related Articles Illustrations by Ansh Sirohi. In collaboration with the Ministry of Social and Family Development (MSF), RICE is publishing a letter written by Ansel*, 19, a foster youth who lived with a foster family for the past 19 years. While Ansel’s letter is a real-life account, it is also educational, i This is the story of how a visit by a group of boys from low-income backgrounds helped change the culture at a five-star heritage hotel.  For Cathy Chia, 33, Director of Corporate Communications at The Fullerton Hotels and Resorts, a community outreach event that was supposed to give these youths