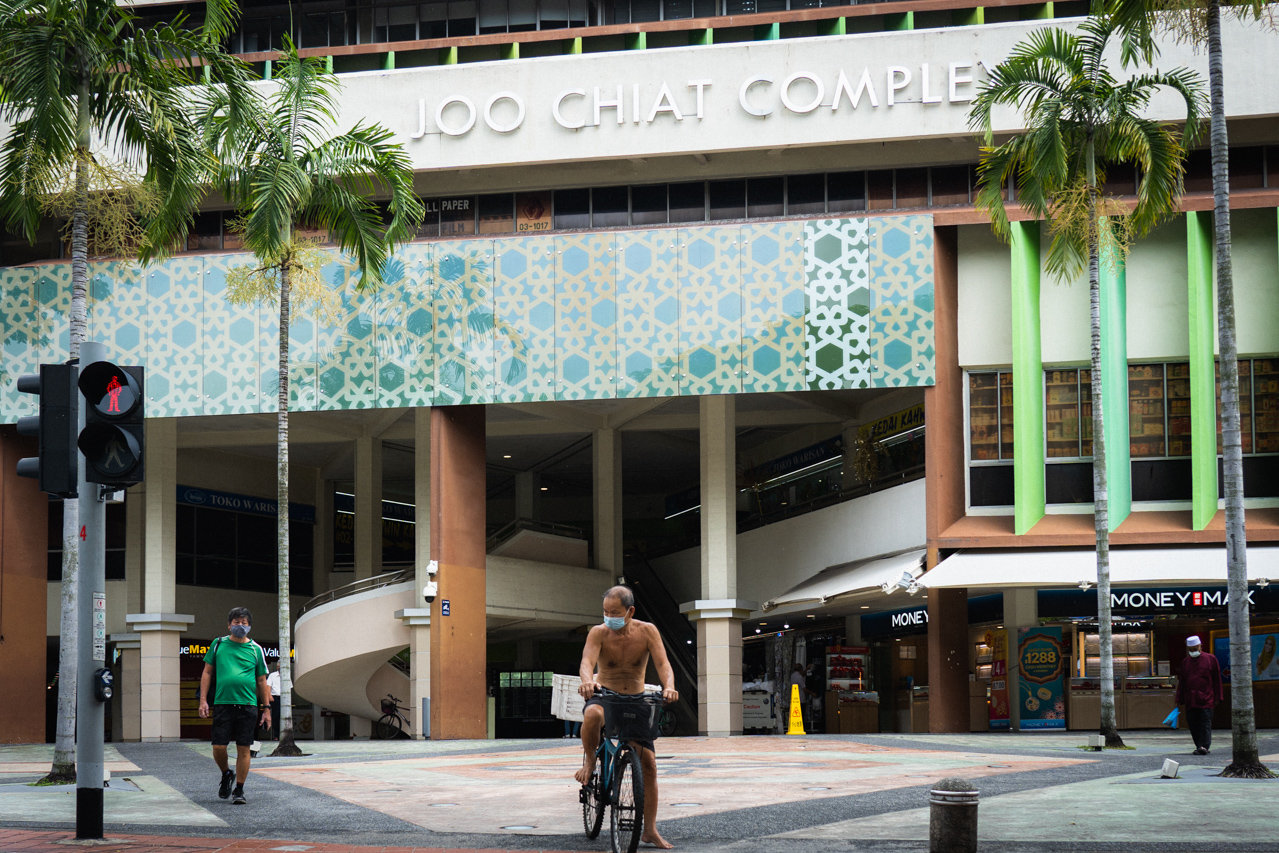 “Why are you here?” The security guard asks, regarding me with suspicion, as I’m taking photos inside Joo Chiat Complex. “The tenants don’t like visitors with cameras,” he says, gesturing to a squad of disgruntled-looking shop owners murmuring to each other near the entrance. I put my camera away and wave to the shop owners, in an attempt to establish a friendly rapport.

As I traipse through the building, I’m rebuffed over and over by the tenants. I suppose as an ang-moh, I do stand out here. Their responses vary from surprise to bemusement, but today, the shop owners are resolute and brusque. No, thank you. We’re minding our business, please mind yours.

Eventually, I give up and scurry out of the mall; downtrodden. For me, this is the most nerve-wracking part of the job: lobbing questions at unsuspecting strangers. My first go at JCC was a nightmare come true. I came all this way and got nothing, embarrassing myself and potentially rattling others in the process.

My editor suggests that I ask Yulianna, our newest digital media savant, to come along with me next time. Yulianna knows the business of discussion, having co-founded Lepak Conversations to foster discourse on “things that matter to the Malay/Muslim community in Singapore.”

On the way home, I snapped pictures along Joo Chiat Road, noticing a more sterile preservation of the past from what I glimpsed in JCC. The restored shophouses are pristine and splendiferous in vibrant primary colours. Also, they house some eclectic businesses: mostly fancy coffee shops but I did chuckle at an ‘ethical cat groomer.’

As I swiped through the few pictures I captured at JCC, it reminded me of Peninsula Shopping Center. Both malls are like flowers embedded in resin—preserved forever in the original shape.

From ulu to atas and back again?

Like the rest of Singapore, it’s hard to reconcile Joo Chiat’s humble past with its colourful present. Pre-war, Chew Joo Chiat, a Peranakan businessman, grew cash crops on Confederate Estate Road. As the demand for housing increased in the early 30s’, he sold parcels of land to wealthy Europeans and Straits Chinese for the construction of luxurious seaside bungalows.

Post-independence, the ‘linear activity corridor’ of Joo Chiat was democratised from a playground for the wealthy to a melting pot for minorities. It was less of a reinvention and more of a return to form, as the area was settled by the indigenous Orang Laut in the early 1900s.

Before JCC was built in the 80s’, the space was an informal bazaar called Changi Market––it was a trading hub for Malays from across the region, mainly trafficking in food, spices, and flowers. Opposite Changi Market is Geylang Serai, which—as a concept—has weathered many storms in Singapore. Even before it was officially conserved, the area was informally gazetted as a bazaar of Malay culture.

As I’ve taken more time to understand the heritage and conservation landscape in Singapore, Joo Chiat stands out as a successful project, having adaptively reused old buildings while keeping their spirit intact.

I’ve come to think of it as such: the atas coffee shops and art galleries harken back to the wealthy who holidayed here, and the bazaars and wet markets represent the indigenous settlers. In some way, Joo Chiat signifies the fundamental pillars and tensions of Singapore.

Second Time’s The Charm: Revisiting With A JCC Veteran

I’ve never met Yulianna before. Our height difference is comical—she’s almost a foot shorter than me. As we skulk through the top floor of JCC, I have to bend over slightly to hear her properly. She has a warm, unimposing aura. Pretty soon, she gets the tenants talking.

The first shop owner we meet is Bibiq, who operates RH Fashion—her sister-in-law’s bridal and special occasion dress shop. She’s proud to show off the speciality garments with elaborate appliques; which take her just under three hours to hand embroider.

Though she’s a grandmother to three, her nature is gregarious and even a little mischievous.

“Why do people come here? Because I’m the best,” she says, gesturing to her store which hasn’t changed much since the nineties, with large bouquets of faux flowers and ornate pastel pink wallpaper. And she’s not exaggerating. Bibiq is a masterful saleswoman—one gets the impression that she could talk to a wall.

“I think it’s something you’re born with or not. Some people just have it. And I have it.”

Look no further than Bibiq’s robust long-term customers for evidence of her sales acumen. Her loyal customer base has kept RH Fashion in business over the years and especially helped the shop bounce back after the pandemic.

On the subject of the pandemic, Bibiq is blase, almost unfazed by the palaver. She enjoyed spending the circuit breaker with her family, where she found a reprieve from the 11 AM – 7 PM shifts in the shop.

“SARS was much scarier.” She said, and her face turned grave for a moment.

Though business was initially quite slow after the involuntary hiatus, it picked up when the public felt more safe going out.

“Business bounced back very quickly. You know, it was probably even better in those first few months—more people were having their weddings with the guest restrictions in place. I think it’s cheaper to get married now. More weddings, more business.”

Bibiq estimates that she’s worked in JCC for 25 years. On the top floor, it’s a tight-knit group. She mentions that her group of friends tend to each other’s stalls and help make sales.

“When one of us makes a sale, we’re all very happy.” Bibiq is keen to point out that her neighbours are close friends. “We Malays want to support each other.”

I suggest to Bibiq that her colleagues are like family, and she disagrees emphatically.

To drive the point home she walks over to another dress shop.

“This girl here, when she first worked in the shop she was young. Then she got engaged, then she got married, then she had her babies. And all of us together have watched her grow up through it all.”

My conversation with Yulianna is easy. She’s happy to share and explain the wares and services. I imagine that it gets tiring having to explain your values and customs, but she makes no complaint of my unfamiliarity. Each question is entertained with patience.

First, she shows me the bling. There’s a whole shop devoted to pins and brooches for the headscarf.

“It’s mostly the older women who like the more glamorous accessories.”

Yulianna prefers to keep it simple when styling herself, but we have some fun picking through the shiny things, like a pair of magpies. Up next, a wedding store—where couples can purchase gifts for their guests, and a host of other accessories.

“The gifts are usually something useful and reusable; a token that you want to take home.”

As we head downstairs, she shares fond memories of getting ready with her family for Hari Raya. Every year—and she’s not sure how this happens—families across Singapore end up colour coordinating. She says it’s kind of like the Pantone colour of the year.

“It’s usually bright colours, something festive and fun. There are no rules. If you want to wear black for example, you can. But I like green the best.”

Our final stop is S. Omar Alkhatib on the second floor, a general shop that sells traditional Islamic items. Upon entering, we meet 66-year-old Mahmoud and his nephew—immediately we are invited to sit, and a few stools appear out of nowhere.

Time moves slowly in this shop. It’s a low-traffic day in the mall, and the shop owners are enjoying their lunch. When we interrupt Mahmoud for an interview, he’s focused intently on a leather-bound book. Mahmoud’s family business might be one of the longest-standing tenants in JCC, clocking in at a whopping 36 years and counting.

S. Omar Alkhatib has suffered in the pandemic more than other shops like RH Fashion. Mahmoud traces the decline to about four years ago when online shopping became ubiquitous. He’s resisted the urge to get online and sell his products through apps like Carousell.

“I don’t want a mobile phone. I like going places where no one can bother me. I feel many people are slaves to their phones. That’s not for me.”

Like Bibiq, Mahmoud has fostered a community with the shop owners on his floor. His uncle—drawn over by our conversation—drops in to invite us for lunch. He repeats his invitation in French and Arabic. Soon, the two men are interviewing me: how long have I been in Singapore, do I like it here, what do I do for work etc.

I pause for a moment when we’re invited to stay for lunch. In Peninsula Shopping Center, the shop owners couldn’t wait to get me out of their units. They were polite, but not friendly. In JCC, I feel like an honoured guest. I am tended to and treated with respect and intrigue.

Yulianna’s presence seems to vouch to the tenants that I’m not insane or untrustworthy. All of my conversations were facilitated by her, and this is a skill she’s honed and practised while building Lepak Conversations. I knew I wouldn’t gain access to this world without her assistance after my failed first attempt.

We try to leave several times, but Mahmoud keeps wanting to talk. He reminds me of my Irish relatives who say several lengthy and halfhearted goodbyes before they walk out the door. We get on to the topic of reading, and he shares that he’s grown tired of Western novels, and has moved on to Islamic philosophy.

“You should read Al-Ghazali. It’s so beautiful. You know: we were writing philosophy when the Europeans were in the dark ages.” 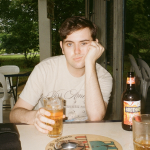