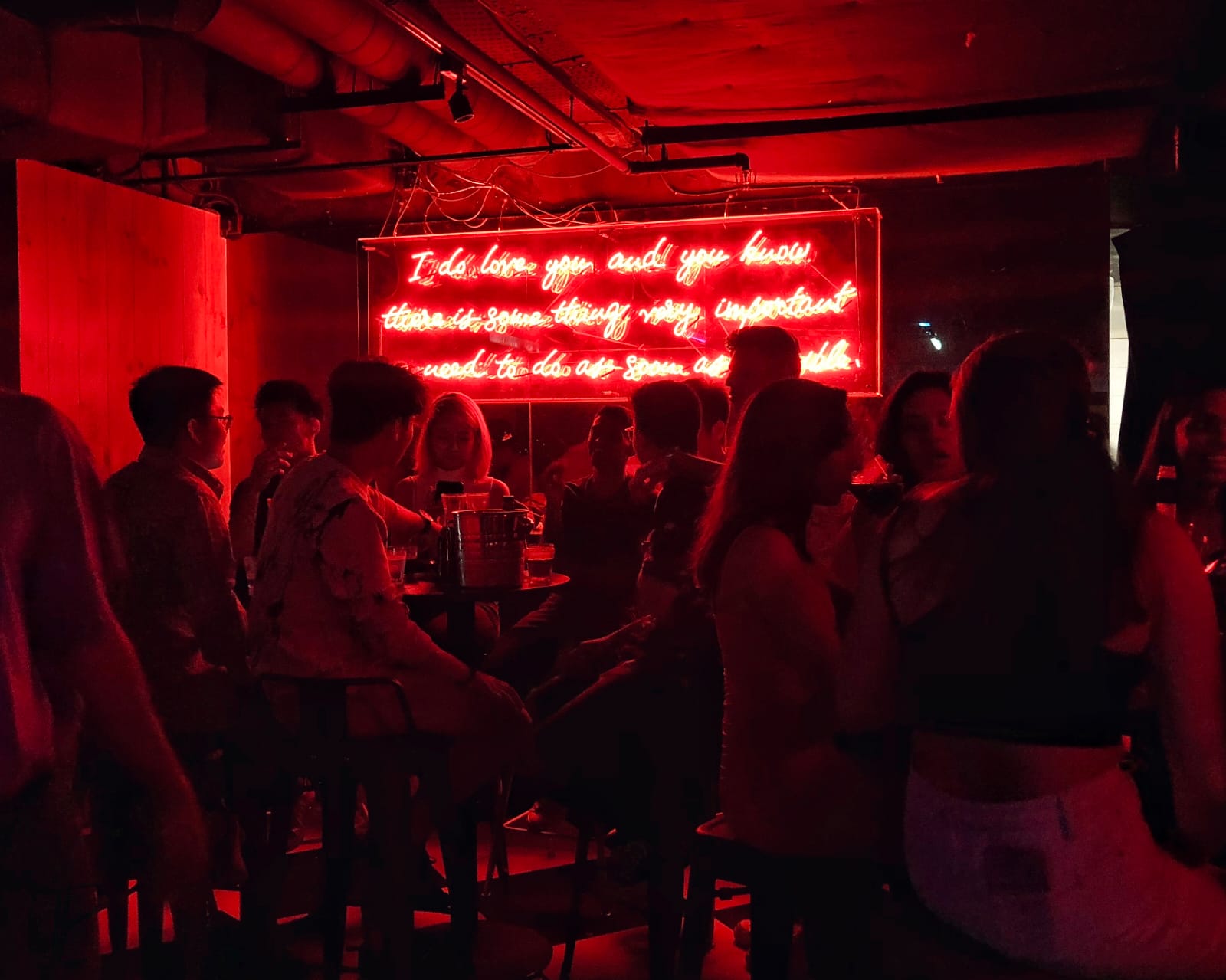 Loneliness is the new pandemic. Like the virus itself, social distancing has a plethora of disruptive symptoms. People that rely more heavily on robust social networks—namely the young and the elderly—are experiencing isolation more intensely. The global supply chain was ill-prepared for this crisis, but socially we were even more inept.

How long can we be vigilant and resilient? It’s a question many of us asked ourselves in the undertow of the circuit-breaker. I returned to this question last weekend in Singapore’s last nightclub. It’s not billed as a nightclub per se, but for all intents and purposes, it functions like one. We didn’t expect what we saw—a flagrant breach of social distancing.

But it wasn’t a surprise, either.

I was curious to visit this establishment because it had pivoted from operating as a nightclub to a restaurant in line with the Phase 3 social distancing rules. With the 10:30 PM alcohol curfew in place, the nightlife industry has faced a challenging year. So, I brought some colleagues to have dinner and support the resilience. In my teen years, I had come here to throw back shots and dance with my friends.

That’s an important part of growing up, right? Indulging the hedonistic principles when they are first available. The joy of a night out is two-pronged: there’s the adventure of sin and an escape from reality. Early adulthood is emancipation that spawns reckless, sometimes bad decisions that are remembered fondly in hindsight. It’s an imperative step towards becoming a whole, integrated person.

What happens when the avenues to indulge are indefinitely removed? Exactly what I saw last weekend: rule-breaking. I quickly realized that ‘dinner’ was a coverup for partying with minimal intervention. The menu had mouth-watering descriptions of hearty junk food that did not match the microwave dishes which landed on our table.

It wasn’t bad at first. The only warning sign of the chaos to come was a young waitress walking around with a mask tucked under her chin like an afterthought. I wasn’t concerned. Sure, the tables on the repurposed dance floor didn’t have one metre of distance between them, but I figured some would be kept empty for distancing.

Security guards in red shirts patrolled the repurposed dance floor with flashlights and surly faces. I assumed they were safe distancing ambassadors, employed to keep matters civil and obedient. The stream of young adults that poured into the room with wide eyes and nothing to lose happened fast. The security guards melted into the crowd, halfheartedly breaking up the party. Some tables were packed with more than eight.

The space devolved into a smattering of intermingling groups, maskless dancers, and even a birthday celebration with a roaring twenties theme behind the DJ booth. I don’t need to harp on the irony of a prohibition-themed party in 2021.

The allure of this space was clear. First, the adrenaline from a secret rendezvous. Young adults are natural antagonists. The prefrontal cortex doesn’t fully develop until the mid-twenties, and it’s responsible for complex behavioral performance. In this instance, there is the tug of war for vigilance and resilience, shoved aside in favor of an escape from the sterile world of safe entry, mask-wearing, and contact tracing.

Young people have lost social rites of passage to the pandemic. Graduations, parties, the first year of university—all taken at a moment’s notice, and not supplanted with viable avenues to indulge or rebel. Admonishing young adults for behaving badly is a swipe at low-hanging fruit. Of course, they are irresponsible and careless. Haven’t we all been there and done that? When has reprimanding a rebellious teen ever worked?

But placing the blame squarely on the establishment is a cheap shot too. Nightlife workers are in a tight spot. Pivoting to the foodservice or otherwise trying to conform to the measures of Phase 3 is costly and sometimes unfeasible. It’s a bureaucratic maze of licensing, rental, and operational woes. The fluid nature of the restrictions throws another spanner in the works—seen in the swift reversal of a pilot programme to reopen nightclubs and karaoke bars.

The prevailing sentiment is that nightlife workers must restructure their operations or call it a day. It’s a disheartening ultimatum, which doesn’t fully account for the value and demand of escapist hedonism. Two symptoms converged to create chaos in this former nightclub: loneliness and desperation. Young adults will find a way to act out, regardless of what’s going on in the world. As the partying spun out of control, we quickly asked for the check. While waiting, the DJ hopped on the mic and made this plea to the crowd:

“If you guys want to come here every weekend you have got to help us. Help us, help you. There can’t be more than 8 people per table. Okay? One more thing, please do not take any Instagram videos. Again, help me, help you.”

It was a shameless appeal from an embattled industry to a lonely group. The motives of both parties are valid and understandable. But creating a public health risk by exploiting the naivety of young adults, then encouraging bad behavior, will not solve this problem.

My sympathy for the operators of this establishment—presumably acting from despondence—waned for a moment when I spoke to the waitress who brought our check. She described her working conditions as ‘fun’ but ‘unfair.’ The servers are young, mixed, slim, and attractive girls who are encouraged to source other young adults from their large followings on social media to spend money at this club. She divulged that the security guards were not social distancing ambassadors, but bouncers hired by the club to stop people from taking videos.

The fun part of her job: free drinks throughout her shift. The unfair part of her job? Lacking compensation. On a table with a minimum spend of $400, which servers are pressured to source patrons for, she earns $5 on top of her $8 an hour. My first response was again, compassion for the young adults who frequent this club. But Singapore’s success in regaining a semblance of normalcy is due to our collective action. These are not children, and they are not exempt from the rules.

We all want to have fun, let loose, and feel a sense of normalcy and belonging. But one person’s want is no greater than the other. Sacrifice has brought us far. We are able to visit our friends and family and gather with caution. These are small blessings, but miracles nonetheless. Loneliness aside—partying is not essential. In this instance, the behavior of the nightclub workers and the revelers are equal in poor taste.

As I mentioned earlier, this situation was a shock but not a surprise. The reason both parties flouted the rules is clear. The way forward, to prevent something like this from happening again, is a trickier path to chart. Loneliness and desperation are at the heart of this encounter, and these phenomena have had dire consequences during the pandemic in other parts of the world.

In the UK and Japan, suicide rates in young adults have skyrocketed during the pandemic. Institutionally, this problem is addressed by the appointment of a ‘loneliness minister.’ The Japanese minister for loneliness has a dual function—he is also in charge of addressing declining birth rates and an aging population.

We’ve heard some discussion in Singapore, post GE2020, about the plight of caregivers due to our own aging population and declining birth rates. Social issues are entwined—addressing the symptoms without interrogating the root cause is palliative instead of preventive care.

I wonder—are the declining birth rates and aging population in Singapore, symptoms of a larger disease? And is that disease the pandemic of loneliness? A cure for the current loneliness is on the horizon with the vaccine. We’re in the home stretch of the race to normality, but treating the symptoms will not vanquish the disease.

Breaking the rules is unacceptable. But perhaps the first step we can take towards solving pandemic-spawned loneliness and desperation is to meet it first with compassion.

How has Covid-19 shaped your behaviour in ways you didn’t expect? Tell us at community@ricemedia.co.