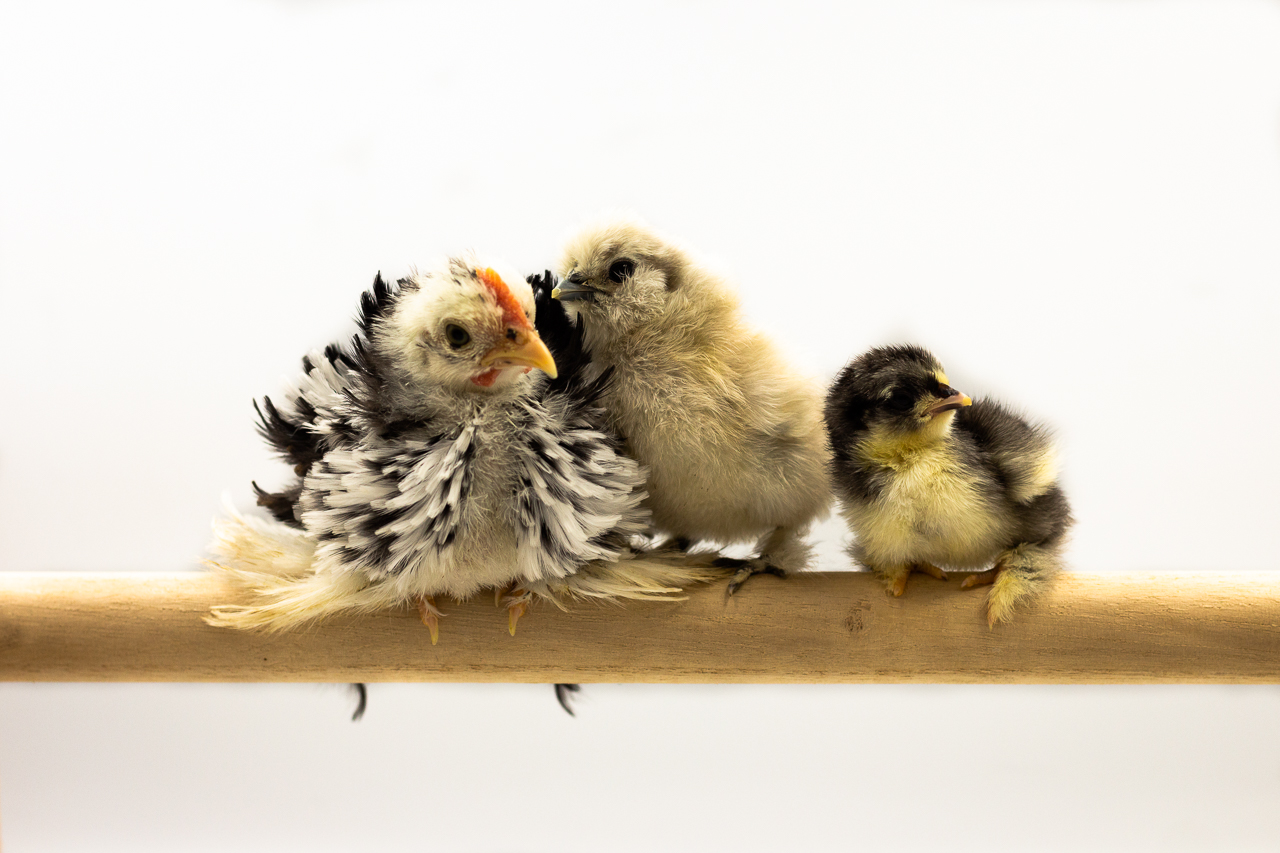 The chicken perches on my forearm like the eagle of a Mongolian hunter. Despite not yet being full size—adult Brahmas are about 5kg, this one’s 3kg—they can put the fear of god in any mortal. Brahmas are massive chickens, easily affirming their status as descendants of dinosaurs.

Its feathered talons latch onto my skin, body swivelling as it adjusts its centre of gravity. Then it flaps its wings, and I feel like I’m king of the world.

No, I’m not on a farm. I’m in an HDB flat on the eastern edge of Singapore, where rows of red capped houses beneath us stretch into the horizon.

This is the humble abode of Eric Woo, chicken enthusiast and leader of Facebook group Fowl Mouthed Family. For the past 10 years, the avian maven has been keeping and rearing chickens.

As a latchkey child, Eric’s parents kept him occupied with pets, and he grew to love animals. When he became a science teacher, he was intrigued by the life cycles he taught. He’s since been riding on the thrill of watching these birds grow up—and they grow fast with an average lifespan of about 7 years.

But chickens are seen as bad eggs. Eric is disheartened by the plague of online trolls and close-minded individuals who hate on chickens, questioning their suitability as pets. Which is why with lawyer, Ryan Su, Head of Department at WMH Law Corporation—who used to be a long term chicken hobbyist—he wishes to dispel the various myths surrounding owning a pet chicken.

Chickens come in many breeds, and they serve multiple purposes. There are breeds who primarily produce eggs and/or become the meat in your kuey png—like Golden Comets and Rhode Island Reds.

But the breeds that become pets—Brahmas, Silkies, (Mini) Cochins—are ornamental. They’re meant to be groomed and beautified and are not domesticated for food.

Strangely, this distinction among breeds also allows for the cognitive dissonance regarding chicken consumption. Most of us would not think it’s okay to eat some dogs but not others. But pet chicken owners have no qualms about eating “other breeds”—Eric offered us a hearty curry chicken lunch after our talk.

As for why chickens make for wildly superior pets? As Eric tells me, they’re birds who will never fly away. They’re interactive—unlike fish. They can be trained to respond when you call, and will follow you around the house. And unlike dogs, cats, and rodents who can only produce shit, chickens can lay eggs, which I’ve been assured are fit for consumption.

2. “I used to have chickens when I was younger in my kampong. They’re dirty and smelly!”

“That’s because people don’t give a shit back then,” Eric scoffs.

Kampong chickens were not treated as pets. Their feed was low quality. They defecated all over the place without anyone cleaning up. They walked on soil.

In such a scenario, it’s not just chickens; any animal would be unhygienic if you don’t care for them. You’re welcome to take a whiff of a stray dog or a chao recruit one week into his outfield.

Plus chickens aren’t high maintenance. Like cats, they are self preening. They just need a clean environment and they can take care of the rest.

Though of course, this doesn’t stop their owners. Eric tells me about many members of Fowl Mouthed Family who eagerly post after-shower pictures of their primped up chickens on Facebook.

3. “Chickens caw and crow and make noise all the time!”

This is … actually true. Eric’s not going to lie: you can’t escape the clucking and crowing. Depending on breed and temperament, chickens may crow only in the morning, or intermittently throughout the day.

But that being said, they’re no noisier than pet dogs. Eric’s neighbours haven’t complained, so it’s safe to assume their feathers aren’t ruffled. If anything, the howling traffic was way louder during our chat.

Also, chickens don’t crow at night. If they do so, it’s because they’re disturbed—too much light or noise messes up their circadian clock. As prey animals—who usually get eaten by other animals—it is in their interest to remain silent at night for fear of attracting predators.

Singapore is free from bird flu.

Look, bird flu is transmitted through avian-on-avian contact. Specifically, they are carried by migratory birds, and not your run-of-the-mill mynah or pigeon annoying you at the void deck. And even if local birds were infected, if your pet chicken is sitting pretty in a grilled-up HDB flat with zero interaction with the lesser birds … how exactly would they get bird flu?

“You’d sooner get it from a coffee shop,” Ryan quips, with bird droppings being pelted all over the place. He’s not wrong.

This myth stems from some bizarre flyers and posters going around Tampines that have been backed by ACRES. We’ve reached out to them for comment but they have not gotten back to us at the time of publishing.

Here’s a history lesson. The iconic red junglefowl—brown bodied, verdant tail feathers, bright red comb and wattle—is widely known as the ancestral progenitor of modern day chickens. They existed throughout South and Southeast Asia, and were domesticated at least 5,000 years ago.

Then they were spread around the globe, giving rise to all the various breeds of chickens we know today.

You see, chickens are by definition domesticated—they are a product of humans sticking their itchy fingers into nature’s maw, squirming about until it vomited a bird docile and subservient to us. Like dogs and cats, they’ve existed alongside us for millennia.

Taking care of these birds in conditions much healthier than factory farms and not expecting production of them is a far cry from animal abuse. A better starting point would be the entire poultry industrial complex.

6. “You can’t keep chickens in a HDB. What you’re doing is illegal!”

This is where things get contentious—and where Ryan comes in.

As chronicled in an article from Today, Eric was once at risk of having his chickens rehomed. HDB came down and told him that chickens in HDBs weren’t allowed.

But under the Rules of the Animal and Birds Act, the law clearly states that “no person shall keep more than 10 non-commercial poultry in any premises.”

Under the Rules, “poultry” is defined as chickens, ducks, turkeys … all the way to swans and peacocks—Ryan paints the absurd picture of keeping 10 peacocks in an apartment. The purpose of the Animal and Birds (Prevention of Avian Disease in Non-Commercial Poultry) Rules, as its name suggests, is to prevent bird flu—which as mentioned Singapore is free of—and not to prevent poultry keeping. In fact, the Rules allow you to keep up to 10 chickens in any premises. “Any premises” being self explanatory—inclusive of HDBs.

NParks’ response is that a flat’s landlord—which is technically HDB and opens another can of worms about how you don’t technically own your HDB flat—can impose additional terms that tenants must abide to, as stated in their lease. Under a general HDB Memorandum of Lease (at page 5), any animal, fish, bird, or insect is not allowed in HDB flats.

However, many types of birds, fish, and even cats—which are not allowed in HDB flats—are still kept as pets, so how can you discriminate against chickens?

Eric tells me that most reasons cited for the ban are inconsistent: HDB flats have the same space constraints as many condominiums—or may be even bigger—and if noise is a problem, dogs have to go too.

So here’s the legal argument I can divine:

1. The law states that chickens in any premises are okay, as long as it’s under 10.
2. The terms of the lease, which are contractual terms, say it’s not okay to keep “any animal” in HDBs.
3. Many types of animals are still kept as pets in HDBs (and rightfully so by loving pet owners).
4. Thus, default to the law, which states that it’s okay.

I’m no lawyer, but Ryan is. I’ll defer to his judgement.

It’s clear that Eric is passionate about chickens. And he doesn’t sell them. You can adopt the chicks for free, and he sells chicken feed instead, ensuring that you are at least invested in giving the birds proper care.

He imports them in bulk, and his members get them at a discounted price compared to pet stores. The margins he earns are pumped back into his community—the fee for their upcoming gathering is $10, but the buffet alone is $16 per person. That difference of $6 (and any other costs) comes from his pocket.

Ultimately, Eric’s goal is to share this hobby amongst Singaporeans. He wouldn’t be keeping  chickens otherwise, because it’s a difficult task. Hens are only productive for 2 years—where they lay about 4 to 5 eggs a week—and he has to ensure breeds don’t mix; that eggs are incubated on schedule, and that the chicks will have a home.

Still, Eric guarantees to his members that in the case of extenuating circumstances, he will take back the chickens and re-home them. That this hobby is the equivalent of a full time job without profit only shows his commitment.

Fowl Mouthed Family has grown from 30 members in June last year to over 960 members today. The aforementioned fourth gathering will be held in November—an indication that previous outings have been wild successes.

Eric is proud that the group comes from all walks of life: lawyers, teachers, doctors, engineers, gardeners, factory workers, landscape artists, drivers; even housewives, grandmothers, and poly students. He loves how it’s a platform for people from various demographic strata to mingle and bond over a shared hobby.

These outings are also run by community members. Volunteers take charge of the “chicken arena” where they break up potential scuffles between chickens (all to ascend the pecking order), settling F&B, securing the location, collecting funds and name-list, and there’s even a vet who specialises in birds providing free medical advice.

Ultimately it’s for families to have a good time, and to feel supported in taking care of beloved chickens.

Looking at these adorable, majestic, and sometimes silly little birds, who am I to judge?

Would you like to be surrounded by cute chicks as well? Hatch your plans with us at community@ricemedia.co.
Share to
Related Articles What Good Is This City We Built, if Not for Everyone to Live?

It's high time we put to bed the tired fishing village narrative and move past inclusivity as mere lip-service. 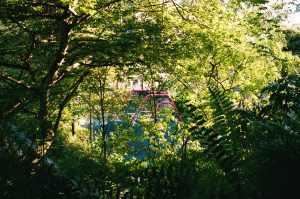