We’ve Gone From ‘Gold Standard’ to ‘Cautionary Tale’ In the Foreign Media. Now What? 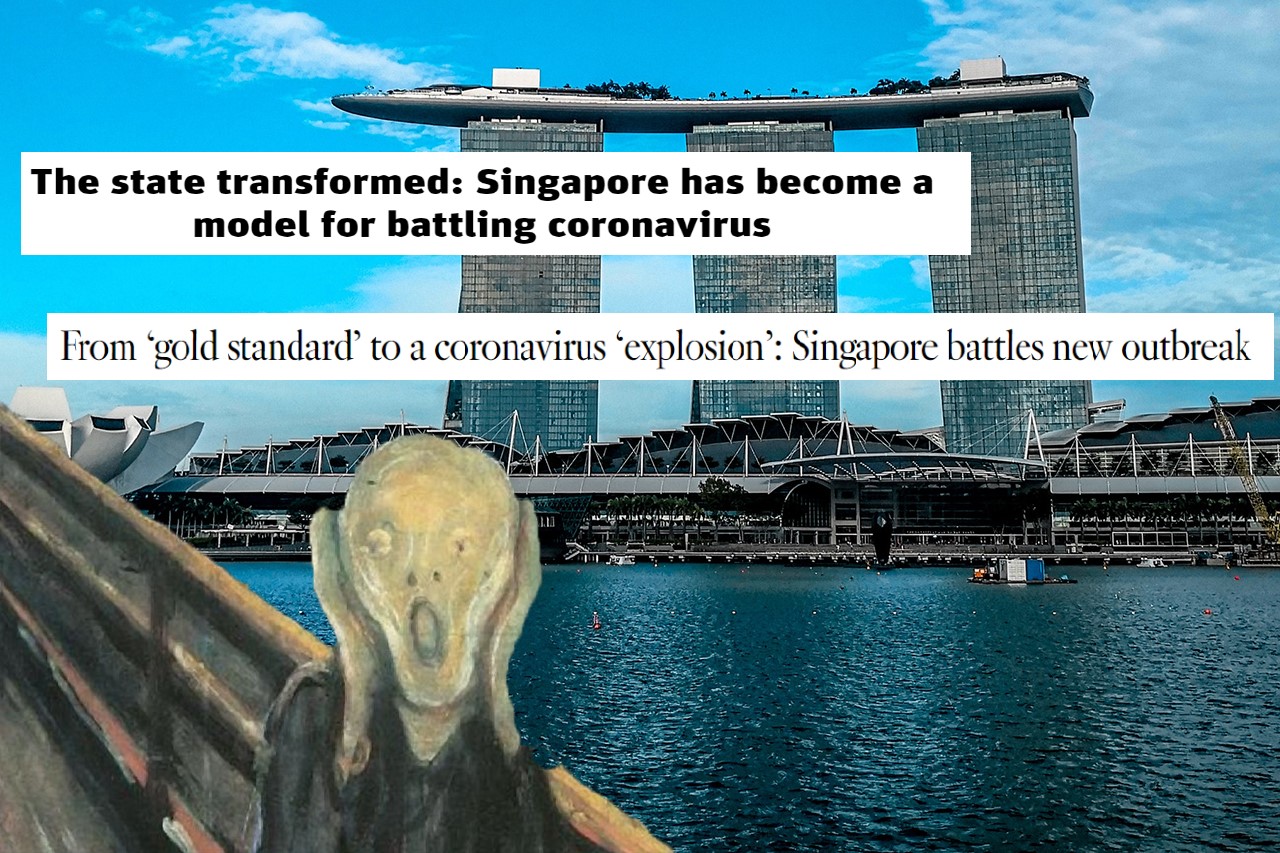 There is no way to spin it: Singapore has been having a terrible, horrible, no good, very bad time in the international press. We were in control, but now we’re the covidiots.

Over the last two weeks, virtually every major news outlet has gone from singing our praises to savaging our handling of Covid-19. In case you haven’t read the articles, or seen them going round on social media, here’s a sample of the headlines:

“Cut back on the back-patting: Singapore’s coronavirus response loses its shine as critics speak out” (SCMP, April 10th)

“Lessons From Singapore: Why We May Need To Think Bigger” (The New York Times, April 14th)

The kinder pieces say: their size and efficiency meant all the odds were in their favour. If they couldn’t do it, who can? The harsher ones border on schadenfreude: look how the mighty have fallen. The model student is now a morality tale about the dangers of complacency and inequality. Either way, our ‘gold standard’ label now looks like a tarnished relic.

How you feel about this is, of course, entirely subjective. Our emotional responses to this run the gamut, and are maybe even contradictory.

There’s defensiveness: This is totally premature, it’s not like their case numbers look any better.

Scepticism: Foreign commentary about Singapore has always been problematic. Even praise has never been unqualified, they can’t even talk about how clean we are without calling us quasi-authoritarian and oppressive.

Indignation: But they ownself praise what. They just wanted to see us fail.

It goes on. There’s also indifference, because we have much bigger things to worry about than some unflattering coverage (and we’ve never cared much about what the foreign press thinks). Or discomfort, because we’re just not used to being hated on.

And of course, shame: the grim acceptance that the headlines are right.

We can see the chaos—the skyrocketing case numbers, of which the overwhelming majority are migrant workers; the way we ended up in de facto lockdown; the ugly vigilantism and creeping xenophobia—with our own eyes. We know it’s bad without the BBC having to point this out to us.

On the other hand, our response to the initial praise was unqualified pleasure. Back in February and March, no one batted an eyelid when Harvard commended our detection strategy as ‘near-perfect’, or when we were held up as a success story along with Hong Kong and Taiwan.

But more fundamentally, the labels we accept and the ones we reject have to do how we’ve chosen to define ourselves as a country.

The early narrative around our handling of Covid-19 was easy to own for two reasons. One, because there was objectively much to be proud of, and two, because we agreed with it.

Success, more than anything else, lies at the heart of our national identity. It is both a goal and origin story. As Singaporeans, doing well isn’t just something to aspire to; it’s what we do. It’s who we are.

In less than three decades, we went from being the little dot that people said would never make it to a First World Country. Today, like Preetipls, we’re used to being the top everything: we have the world’s highest PISA scores and life expectancies; the best airport, the most open economy.

At the same time, much of our initial response to Covid-19 was good. The government began running daily press briefings as soon as the first cases were reported; we implemented travel restrictions much sooner than the rest of the world. Our contact tracing was, and remains, robust. Civil society groups quickly sprung into action to support the vulnerable.

As such, when the now-infamous ‘gold standard’ label started circulating, first in foreign and then in local media, it was perhaps less complacency than confirmation bias.

What everyone else was saying about us only affirmed what, deep down, we all believed already. We were used to doing well; others said we were doing well; therefore, it would all be fine.

Now, the way things have unravelled over the last few weeks—an eleven-fold jump in cases,  followed by gradual lockdown—has forced us to take a long, hard look in the mirror. Whether you agree with the foreign press calling us a ‘cautionary tale’, or think this is premature and unfair, it’s undeniable that things are looking pretty grim.

At this stage, it’s worth noting that this is far from the first time Singapore has been slammed by the international media. In any given year, we get criticised over Section 377A, our capital punishment laws, and our lack of press freedom. It’s not even the first time we’ve been called out over our treatment of migrant workers.

However, all this rarely causes a stir. We’re no strangers to bad press per se; we’ve just always found ways to dismiss it, usually on the basis that it’s the biased sophistry of ‘liberal’ Western media who don’t understand ‘Asian values’, or Singapore’s unique socio-political circumstances.

In other words, we deflect criticism with the same logic we use to justify our success—by making ourselves the exception.

This time, however, the backlash has coincided with a rare moment of national reckoning. The only difference is that the foreign headlines have been quicker to say what we’re still reluctant to admit: that we’re not only not exceptional, but capable of screwing up.

We’re the ones who always have things ‘under control’, but now we’ve ‘lost control’, to the tune of a humanitarian crisis. We’ve always prided ourselves on our glittering skyline, only just realising that it masks two different cities. We’re usually lauded for our foresight, but now the rest of the world is being told to look at us and ‘think bigger’.

We’re saddened by the inequality in our midst, and surprised at where we’ve found ourselves.

What happened?, we ask. Weren’t we supposed to be smart, capable high-achievers?

How did we get here? Is this who we are?

Covid-19 isn’t just messing with everything we’ve thought about ourselves, and causing some truly spectacular cognitive dissonance; it has also dragged failure and fallibility into our national consciousness. The extraordinary thing wasn’t that we made mistakes, but how we assumed success was the norm to begin with.

What happens next—whether in the short- or long-term—has nothing to do with what the international media says about us. In fact, the wave of Singapore-shaming will probably subside soon, once reporters have exhausted this angle or some new, more compelling story emerges. It’s just how the news cycle works.

What it does depend on, like everything that’s happened so far, is how self-aware we’re prepared to be about our handling of Covid-19.

For now, our attention is rightfully focused on the problems at hand. With cases still rising and another month of circuit breaker to go, it’s impossible to say how the outbreak will end, let alone judge our overall handling of it.

Still, one wonders what sort of country we’ll look like when we come out the other side of this.

We have already heard calls for ambitious policymaking to address the structural issues which Covid-19 has exacerbated. We must, for example, relook our standards for migrant workers’ welfare; there also have been proposals to explore previously unmentionable policies, like the one for universal basic income floated by NMP Professor Walter Theseira.

However, it is also a time to be imaginative with the sort of country we want to be, and the values we define ourselves by.

Crises are always pivotal in the formation of national narratives—a process which all of us contribute to, not just politicians and historians. This means giving credit where it’s due, and taking pride in our successes. It also means acknowledging our mistakes, and questioning the things we’ve taken for granted.

We might have been shamed, but the opposite of shame isn’t honour; it is openness. The stories we tell ourselves matter. The best thing we can do is to tell them with honesty.

How are you feeling about our fall from grace? Write in and tell us at community@ricemedia.co.