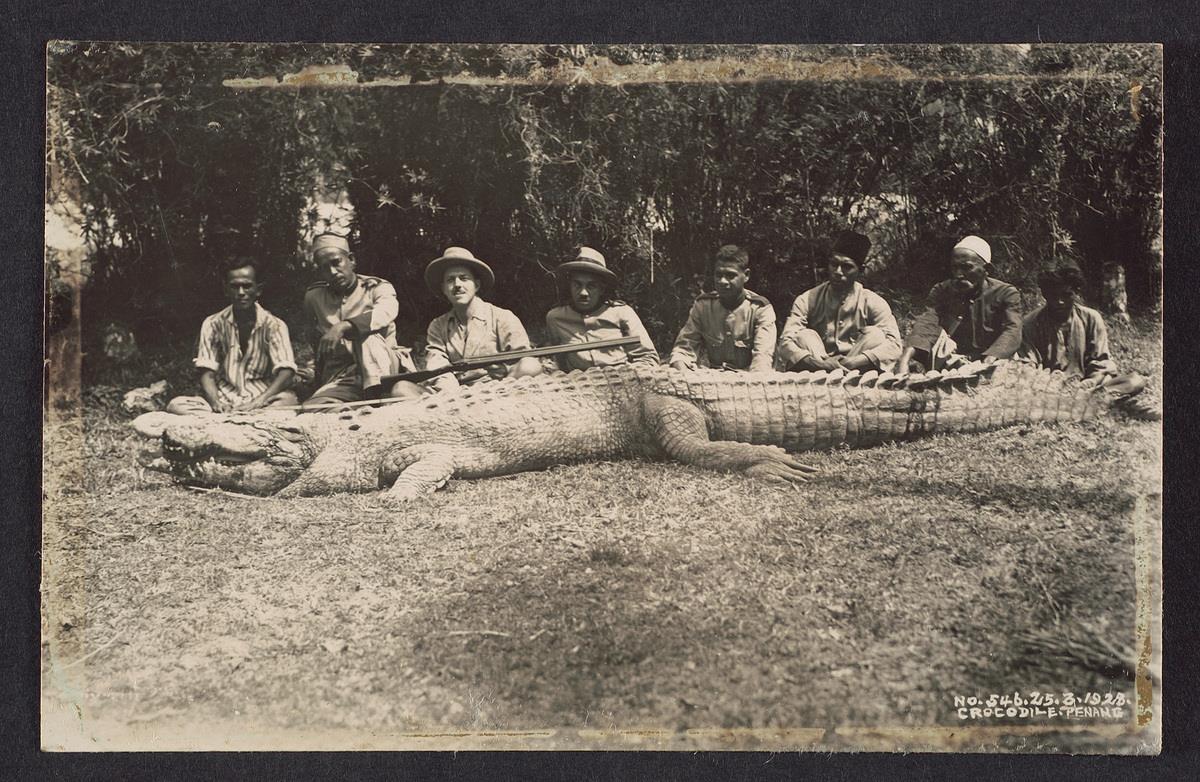 Once upon a time in Singapore, William Farquhar was doing his 10,000 steps challenge along Rochor river when his dog leapt into the water and was promptly eaten by a crocodile.

Incensed by the death of his canine friend, Farquhar dammed the river and lead a search party to hunt down the recalcitrant reptile. When the group caught up with the croc, they speared her to death, then hung its body from a tree in Bras Basah for “all to see”.

The question is, why? What does this story, as recounted by Munshi Abdullah, tell us?

Crocodiles have no concept of justice and surely cannot understand English Common Law. And in any case, this public execution was not an effective deterrent. Some 50 years later, in 1907, a taxidermist discovered 4 dog collars when he opened the stomach of a Punggol crocodile.  The owners were contacted. Hence, perhaps only one purpose was served by Farquhar’s Croc vendetta. It was a ‘symbolic act’ to assert the dominance of man over nature, and of civilisation over ‘savagery’.

Farquhar v. Crocodile is just one of the many stories found in Professor Timothy P. Barnard’s new book Imperial Creatures: Humans and Other Animals in Colonial Singapore 1819 – 1942.

Although it’s a serious academic study of British Imperialism, the book makes for great bedtime reading because it is also 200 pages of fun facts about animals.

Did you know, for example, that Tigers were not truly native to Singapore? We’ve all seen that pitiful picture of Singapore’s last wild Tiger, shot dead at Choa Chu Kang. But the truth is, they did not arrive until 1831. They might be present on our national crest, but only because land clearing for plantations created the perfect big cat habitat.

A dense jungle does not have enough food to support large predators, but deforestation creates large areas of underbrush that attract wild boar and deer, which in turn attract Tigers to make the swim from Johore.

Perhaps we should replace the Tiger and Lion on our national crest with flying foxes and fruit bats. There were once so many bats that ‘millions’ were found hanging in the mangrove forest. When they took wing, they formed “one vast uninterrupted cloud” which darkened the skies.

Did you also know that Amoy Food Centre used to be an unregulated pig farm? I didn’t, but it’s true. In 1886, the municipal authority shut it down because they found the filth “highly-objectionable”.

When the pigs were bacon-ready, they were sent to Pulau Saigon, a tiny island located in the river, between Clarke Quay and Robertson Quay. This island—now the site of a condo you can never afford—hosted Singapore’s first public abattoir. Before Pulau Saigon, butchery was an amateur sport practised in the “private slaughterhouses” found everywhere from Chinatown to Tanglin.

For those less interested in Bak Kut Teh and more keen on profit, ornamental wildlife was a good bet. You could purchase a parakeet for 25 cents while a talking Cockatoo which shouted ‘fuck’ at your colleagues would cost about $6.

For those with more cash, there were also tigers, leopards, Orang Utans, parrots, kangaroos, and even dugongs. They were sold cheaply by Bugis traders and bought mainly by European seamen, who re-sold them for a tidy profit when they reached home. To offset the huge capital investment demanded by, say, an Orang Utan, they would pool their money and divide the profits.

ACRES, had it existed then, would be absolutely furious. In those early years, Singapore became so popular a destination for exotic wildlife that not a month passed “without some representative of a foreign zoological society calling on Singapore in search of animals, reptiles and birds”.

Hence, it was no surprise that Singapore also boasted a variety of private zoos and menageries. Before the Singapore Zoo and Inuka the Polar Bear, there was Punggol Zoo and Apay the Tiger. The zoo was founded by Indian entrepreneur William Basapa, who bought the 27-hectare site and turned it into an attraction complete with elephants, monkeys, and even a restaurant.

Unfortunately, those zoo animals became the first Singaporean casualties of WW2 when the British Army commandeered the site in anticipation of a Japanese landing in Punggol. They shot all of the animals, but not the Japanese soldiers, who invaded at Kranji instead of Punggol.

I could go on, but you get the point: Singapore has a fascinating relationship with wildlife.

However, my childish account does the book no justice because it is more than just a collection of trivia. There is a larger point here, and it is that human-animal relationships reveal much and more about colonial Singapore. There is a small mountain of literature about the relationships between coloniser and subaltern, but little has been said about how the elephants and jackals fared.

The answer is “not well”. In the early years, there was a notable reduction in biodiversity as a result of Singapore’s rapid development. Within a few decades, having deforested and shot their way through Singapore’s ecosystem, many were complaining that Singapore was “no longer the place for sportsmen”. One hunter, G.P Owen, lamented that there was nothing to shoot except wild boar.

Relationships between the natural world and the human one also came under increasing control from Whitehall. Dogs, which had been native to Singapore since the Majapahit Empire, and freely roamed the streets and plantations, were culled to prevent the spread of Rabies, even though Rabies was found mostly in European pure-breds. Slaughterhouses became regulated to limit their ‘nauseating discharge’, and the concept of animal cruelty was introduced, albeit with some difficulty. In short, the natural landscape of Singapore was remade to serve the market forces which became Singapore’s new raison d’etre. Tamil water buffalo replaced the fruit bats, and the provision of beef—Britain’s favourite protein—became a pressing concern.

Imperial Creatures is not an angry book, but readers familiar with Singaporean history might notice more than a few similarities in the way London tackled public policy for animals and humans.

Take, for example, the aforementioned Rabies outbreak. The source could be traced to one particular ship, the Oxfordshire, which had sold ‘fancy’ dogs to Tanglin residents but failed to disclose suspicious deaths on board. However, when people began dying of Rabies, the municipal government refused to accept that fancy English dogs could be spreading Rabies, even when its own officers began dropping dead.

Instead, it was blamed on the innocent strays, which were culled in great numbers, to little effect. If you are vaguely familiar with the history of public health in Singapore, then this episode might remind you of how the municipal government tackled infectious diseases like Cholera or Tuberculosis. As in the case of Rabies, the government seemed to assume that disease originated in some vague notion of “Asiatic filth”.

Likewise, the story of Farquhar’s crocodile recalls—uncomfortably—a similar hanging of the Merchant Syed Yasin, who attacked Farquhar in a personal dispute. Like the Rochor crocodile, he was killed and his corpse was strung up in Tanjong Malang as a warning—until it was reduced to nothing but a cage of bones.

For modern historians suckled on Foucault and weaned on Deleuze, this book will read like one of those ever-popular Peter Ackroyd histories written for the general public. There is a conspicuous dearth of post-structuralist critical theory and the word ‘deconstruction’ does not appear even once.

If this last paragraph sounded like total gibberish, then congratulations, as a member of the general public, you might find Imperial Creatures instructive and interesting.

Much and more has been written about the people of colonial Singapore. So much, in fact, that we often forget that Singapore was once considered a naturalists’ wet dream. It is hard to imagine now—unless you’re doing reservist—the dense jungle, and its abundance of birds and bats, and the idea of English gentlemen shooting tigers in Yishun for sport, and cattle causing traffic jams as they are driven from Australian ships to the abattoirs  of Jalan Besar. Imperial Creatures is the story of that oft-forgotten past, and of how the British Empire changed not just the human societies of South-East Asia, but also its natural heritage.

Today, the government is building an eco-friendly resort in Mandai—at no small expense to the environment which it hopes to showcase. The irony of all this has thus far gone unacknowledged. It seems to me that we have travelled a long way and learnt a great deal, only to end up where we started. God Save The Queen.

No. I have no idea how Farquhar was able to ascertain which crocodile was responsible. Imperial Creatures is available at Kinokuniya and NUSpress.

For other showerthoughts, please write to community@ricemedia.co.