The latest Jordan Peele movie has descended upon us. It’s about UFOs.

The best blockbuster filmmakers make us believe in the unimaginable. But this time, Peele is touching upon something unimaginable that some among us already genuinely believe.

Before I RSVPed for a preview screening on a Thursday morning—a week before it opens in cinemas here—it only made sense to make first contact with one of them: a UFO truther.

Accompanying me was Larry*. As we settle into our seats, he shows me a clip he had taken from a recent trip to Bali. While lounging outside a villa, a translucent boomerang-shaped object appears far away. His Xiaomi phone’s camera lens gave a generous peek of its presence.

It glided downwards right before it disappeared abruptly.

He showed it to his family, who were left stunned by the footage.

“They’ve always been cynical about my interests. At least, until they saw this.”

After seeing it myself, I don’t blame them.

Not Of Planet Earth?

Trying to write about Nope without spoiling it is an upward challenge. But I will try.

Nope is different from Peele’s previous films (Us and Get Out) in that it’s his most star-studded film yet. It’s also different because Peele is now upfront about what this film is: A UFO movie.

We’ve seen UFOs and aliens onscreen for as long as we can remember. They’ve been depicted as hostile, blood-thirsty, inquisitive, friendly, cunning, and… kind of cool. So, what can Peele do that hasn’t already been done?

Turns out, quite a bit. After all, Nope’s primary menace is something that still inspires reverence and obsession among a particular subset of people.

Larry is a Singaporean married man in his late 30s, a thriving CEO of a local financial institution. At the front of his mind are anxieties about the looming recession. He also believes in UFOs. (By the way, so does Peele.)

In the past few years, we’ve had conspiracy theorists aggressively spring up from different corners of the web and in real life. They spout opinions that range from silly to downright dangerous. Some of them draw from years of evidence—questionable documents, articles, sensational video clips.

These pale in comparison to the vast lineage of UFO truthers. Maybe it’s because, unlike most conspiracy devotees, they are heavily intrigued with something that even government bodies have been concerned about. It helps that several of them have their own stories to tell.

Larry was in Taiwan when he first spotted an alleged UFO, during an overseas exercise as a young 20-something officer trainee. He was camped out in a mountainous area, with no buildings or planes in sight. One quiet night, he wore a pair of military-grade night vision goggles, just to try them out for fun. Out of nowhere, three objects appeared to cruise in the sky.

He nudged his friends to see exactly what was happening. The three distant objects, invisible to the naked eye, were flying to the right before making a sharp U-turn in unison.

“Our entire section fell silent, until one of them said, ‘What the hell was that?’” Larry tells me. It was not fighter jets, he assured me.

Larry hides his obsession, which has only grown larger with every passing year. Only his immediate family members and wife know about it. “I don’t want friends and colleagues looking at me like I’m crazy.”

His wife, on the other hand, remains tolerant—as long as she doesn’t hear about it from him too much. He goes to church and remains a devoted Christian, believing both areas don’t come into conflict.

“For an advanced creation [like humans], you need an architect with a more advanced consciousness,” he remarks.

“So if we are a byproduct of God, who is the central architect, there could be more of his creations out there. They’re just more intelligent than us.”

Sometimes, at home, he’s on his laptop reading declassified documents or watching testimonies by Paul Hellyer, or other high-ranking officials who have testified to the existence of aliens. On other nights, he retreats to his rooftop.

“I lay down floating in my pool at night, just to see if I can spot anything in the sky.”

These days, Larry’s sourcing a pair of military-grade night vision goggles and a telescope. He believes he needs better equipment to see what he first saw in Taiwan.

“The goggles cost an easy four-figures and are only available in the black market,” he mentions. “They’re not easy to get.”

The Truth is Out There

Jordan Peele has made a name for himself over the past few years for his relentless, nail-biting horror films. His debut Get Out stunned audiences—a pulpy Hitchcockian thriller underlined by the violent realities of racial prejudice.

Peele’s 2019 film Us continued his flair for sharp subtext, although the weight of it threatened to bury the truly unsettling scares it offered.

Refreshingly, Nope is primarily a UFO film. In true Peele fashion, it digs into much more: exploring our tacit acceptance of (and participation in) a culture of surveillance, the fragility of our place within the natural order of things, our obsession with spectacle on spectacle, and the stained legacy of Hollywood filmmaking.

It’s also his most horrifying film to date. Get Out revelled in chilling moments of unease and a lingering tension that escalated to a boiling point. Us exploded almost immediately like an apocalyptic reckoning.

Meanwhile, Nope does something far simpler in concept: it forces you to look when you really don’t want to.

Larry was impressed by Nope. “I’ve never seen UFOs depicted like that,” he tells me as we walk out of the cinema.

He recalled various moments in the film that he thought mimicked real-life phenomena perfectly, all of which affirm signs of lurking flying objects (or the apocalypse, depending on who you ask).

Nope isn’t rife with jumpscares, but whenever it does happen, it works. Most of us in the audience recoiled in horror, happily, but Larry remained stoic. Maybe all those years of seeing weird objects have made him indifferent to the spectacle.

Most UFO films explore the idea of communicating with (or resisting) life forms outside of earth. Nope poses the rare question: Even if there is something out there, should we, instead, just mind our own business?

I brought this up to Larry, who remains unfazed. Everything that Larry has done since Taiwan has been a relentless effort to understand exactly what he saw.

But unlike many conspiracy theorists, I learn his preoccupation with UFOs isn’t one out of paranoia and distrust. Nothing to do with shape-shifting lizard people or a shadowy cabal pulling strings behind a velvet curtain.

“It’s actually just a quest for knowledge behind what all of this is,” he tells me.

“What is reality? What’s it really like? It’s an existential quest, in my opinion.”

Conspiracy theories are considered fringe and dangerous when they arrive at an absolute: targeting groups of people, upending structures without addressing real-world crises.

I was ready to dismiss Larry’s ideas – the amount of times he says “do the research” veers on the side of anti-vaxxers. Nonetheless, his fascination is, weirdly enough, more relatable than expected.

At the core of his UFO obsession lies the one thing that does separate him from most ordinary Christians.

“Your theological viewpoint as a Christian is that you’re the ‘centre’ of everything,” he says. “That God created the universe, and humans are the child of God. We’re the centre of everything and nothing else matters.”

He brushes against this notion. When I began to leave church a decade ago, so did I.

The existence of aliens affirms his belief in a God. He thinks it’s a necessary reminder, in true Carl Sagan fashion, that the universe is much larger than we can imagine. We can either choose to leave it alone or start digging.

Peele stated in an interview that he loves how science fiction movies show us “the fear in our hearts that we are somehow alone, that we might be alone in this universe.”

Larry knows no such fear. But he hangs on to a singular truth that Peele would agree with, at least judging by Nope’s stunning climax: “We’re all collectively insignificant specks of dust.”

*name changed to protect his identity 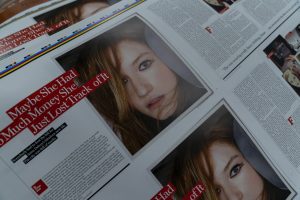