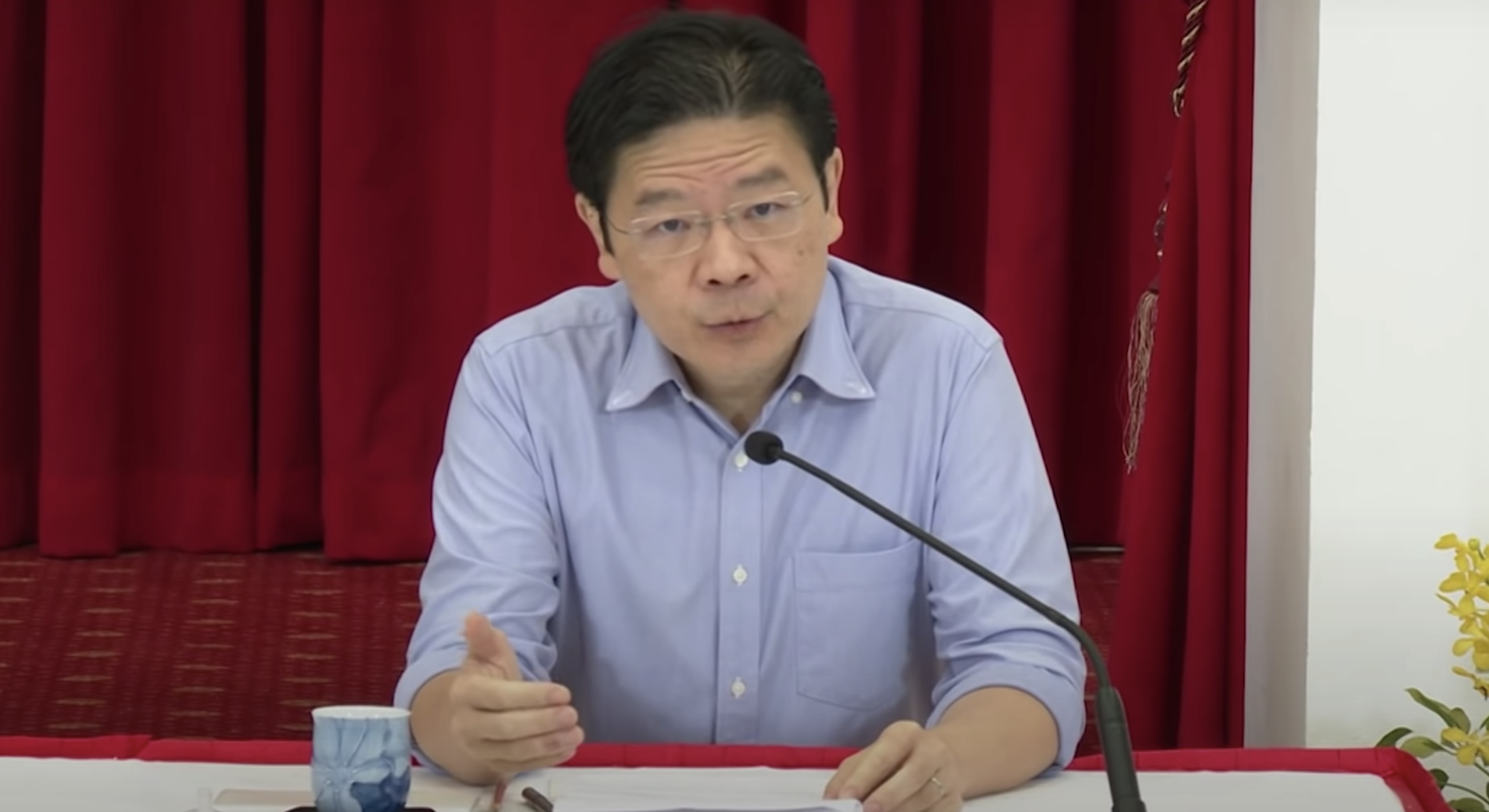 Last Thursday, on 14 April 2022, Prime Minister Lee Hsien Loong announced on Facebook that Finance Minister Lawrence Wong had been chosen as the leader of the People’s Action Party’s (PAP) fourth-generation (4G) team. For all the political analysts and sleuths alike, this has put the question and speculation of succession finally to rest.

As heir-apparent for the highest office in the land, there would be undue attention on Mr Wong’s every move till the next General Election. Naturally, the obvious question is whether Mr Wong can take up the mantle of Prime Minister of Singapore.

A quick answer to that is a well-furnished resume as a testament to his capabilities, where he was thrust into the spotlight with the Multi-Ministerial Task Force (MTF) taskforce, credited for the success of Budget 2022, and his many years in service in the government sector.

The question at hand is not whether Mr Wong is up for the job because, frankly, we won’t know for sure until he eventually gets it. Perhaps, the focus might be shifted to consider the Singapore Mr Wong will stand to inherit as Prime Minister and whether he is equipped to handle it.

After all, the world that stands before Mr Wong is vastly different and more complicated from his predecessors.

Still, we can take a cue from how Mr Wong has previously dealt with similar situations to offer us a glimpse of his leadership style. Seeing as we are also heavily shaped and influenced by the treacherous landscape of social media, heavy is the head that will wear this crown.

With the spate of racist incidents within the last two years, race relations in Singapore are understandably fragile. It’s a slow ticking time bomb, and managing these relations would be one of, if not the most pertinent concern, of becoming Prime Minister.

Historically, politicians have been cautious and deliberate about bringing up the thorny issue of race in Singapore, often following the blueprint of a well-rehearsed statement that condemns racism whenever the subject comes up.

It goes like this: a firm condemnation and zero tolerance of racism, followed by a poignant reminder that Singapore exists as a multicultural country. That these issues are part and parcel of us living in harmony before rounding up with a mention (or recitation if you’re lucky) of the pledge and a reminder of how racial harmony is a “constant work-in-progress”.

There is nothing grievously wrong with this spiel, but we can never progress to more meaningful conversations or action on race if we continue to tread these same tired and predictable paths.

The perennial issue of race

In light of the recent anointing of Mr Wong, it is worthwhile to also relook his speech on race and multiracialism organised jointly by the Institute of Policy Studies (IPS) and the S. Rajaratnam School of International Studies (RSIS) in June 2021.

Unsurprisingly, the speech does take its lead from the well-worn playbook. “Race is never an easy issue for any society in the world,” Mr Wong intones, “especially highly diverse ones like ours. It is highly emotive because the question of race is wrapped up with our identities, our cultures, our ways of life”.

There is also the acknowledgement of the grievous impact these incidents have on our society. “These racist acts are unacceptable. I feel the hurt caused. Like all of you, I wish these incidents had not happened”.

“Let me be clear: I am not saying that we should refrain from voicing our unhappiness, or that minority Singaporeans should pipe down about the prejudices they experience. On the contrary, we should be upfront and honest about the racialised experiences various groups feel, and deal squarely with them,” he asserts.

It’s an earnest and empathetic response that checks all the right boxes. Still, as encouraging as Mr Wong’s statements are, we must consider the other troubling moments in his speech.

There is the minimising and deflection of ‘Chinese privilege’, citing “we still have a whole generation of Chinese Singaporeans who are more comfortable in Chinese than English, and who consider themselves at a disadvantage in an English-speaking world”.

Then, on 23 November 2021, at yet another IPS-RSIS Conference in November 2021, this time addressing identity, Mr Wong took a further marked stance against the phrase, calling it “a sloppy overgeneralisation of the diverse experiences of Chinese Singaporeans, who may be rich or poor, male or female”. Reducing ‘Chinese privilege’ to a “mere stereotype” erases and trivialises the experiences of minorities at the hands of this racial advantage.

Furthermore, we must consider Mr Wong’s insistence that Singapore should retain the antiquated Chinese, Malay, Indian, and Others (CMIO) framework. At the conference, he asks, “how would Singaporeans feel if the proportions of C, M, I and O were to shift dramatically?”.

For Mr Wong, having any other framework than the current CMIO would brusquely topple the careful balance that CMIO affords, and society would devolve into chaos. Given the increasingly complex and intricate landscape of race relations, the CMIO model is simplistic in its categorisation—our multi-cultural city-state must demand more.

His eventual leadership must display a more thoughtful and deeper understanding of race relations for a more progressive and equitable Singapore.

Besides race issues, another issue Mr Wong may face is the burgeoning LGBTQIA+ matters, specifically the repealing of 377A.

After many years of heated discussion and casual tossing from the courts to parliament, it’s clear that repealing 377A is not something that will go away quietly into the good night anymore. Indeed, the government has signalled that they are open to more discourse on 377A, going on to acknowledge the rights and viewpoints of members of the LGBTQIA+ community.

Most recently, Law and Home Affairs Minister K Shanmugam spoke in Parliament with regards to repealing 377A, asserting, “likewise, any attack on any other group, based on their religion, or religious beliefs, even if those beliefs run counter to values held by LGBT+ groups will not be acceptable”.

To his credit, Mr Wong, at the same IPS-RSIS Conference in November, was relatively progressive and inclusive concerning LGBTQIA+ individuals in society.

He stresses that “LGBTQ persons feeling that society does not accept them” is worrying before doubling down on Singapore’s “ethos”, that “every Singaporean deserves a place in our society, regardless of his or her background, status or racial or cultural identity”.

Moreover, he adds, “we cannot—in the name of avoiding the dangers of identity politics—deny the rights of a variety of groups to organise themselves, so as to gain recognition for their concerns or seek to improve their conditions”.

It’s a bold stance for any MP, especially when many have carefully skirted or side-stepped around the issue.  Beyond passive acknowledgement, this displays a fundamental step toward the inclusivity that Singapore aspires to have. It is the hope that this stance is further translated into more concerted action under Mr Wong’s leadership as LGBTQIA+ issues are no longer fringe issues to be dealt with as an afterthought.

In the same breath, we cannot ignore Mr Wong’s position on the transgender youth issue back in 2021 which resulted in a protest outside MOE headquarters at Buona Vista. Although he recognises that these issues are “complex” and “strive to deal with these situations sensitively and with compassion”, Mr Wong urges all of us to not “import these culture wars into Singapore, or allow issues of gender identity to divide our society”. Never mind that this issue is less an import of the West and more of a problem facing Singaporean teens in Singaporean educational institutions within the landscape of a decidedly Singaporean society.

As our borders open up and we invite more immigrants to live and contribute to Singapore, inevitably, the question of Singaporean-ness is sure to rear its head. Undoubtedly, striking a balance between attracting foreign talent while ensuring locals don’t feel chafed and their rice bowls as being ‘stolen’ is challenging.

Singapore has to keep itself open to remain economically viable, as Mr Wong put forth in Parliament last year. “We will continue to ensure that the companies we attract and root in Singapore are those who are committed to nurturing and growing our Singaporean core,” he implores.

The statement is fair and rather forward-looking, where he sees both parties doing their fair share of making Singapore a viable place to live.

Still, as rosy as his outlook on the peaceful and successful integration of these two groups, we can no longer ignore the growing disenchantment many foreigners and non-citizenship Singaporeans have with how they’re being regarded in this little red dot.

For them, the path to citizenship has always been hazy and has, in its wake, ousted many locally born non-Singaporeans by denying their citizenship repeatedly. It’s disappointing, frustrating, and undeniably heartbreaking.

These invisible fissures are constantly ignored, and they only get deeper and deeper as clinching citizenship becomes an even more muddled affair. If we were to claim Singapore as open as it is, then before we welcome even more people to our shores, those here for years should be considered first.

The underdog as the new hope

In the race for Prime Minister, Mr Wong was the most unassuming of the lot. This bookworm, guitar player, and dog lover, as described on his Instagram, was only thrust into the spotlight when he was part of the Multi-Ministerial Task Force (MTF) to combat Covid-19.

Lawrence Wong is the everyman who wasn’t minted from the Raffles-Hwa Chong factory and unabashedly loves strumming his guitar while crooning Eric Clapton tunes. Indeed, the dark horse who was overcome with emotion while speaking about our healthcare workers won the race at last.

Despite these affable and endearing qualities, the jury is still out whether Mr Wong will be able to charge us forward and affect real systemic change in Singapore. Of course, the thing about underdogs is that they often surprise you, whether that may be for the better or worse, we shall wait with bated breath for what comes next.