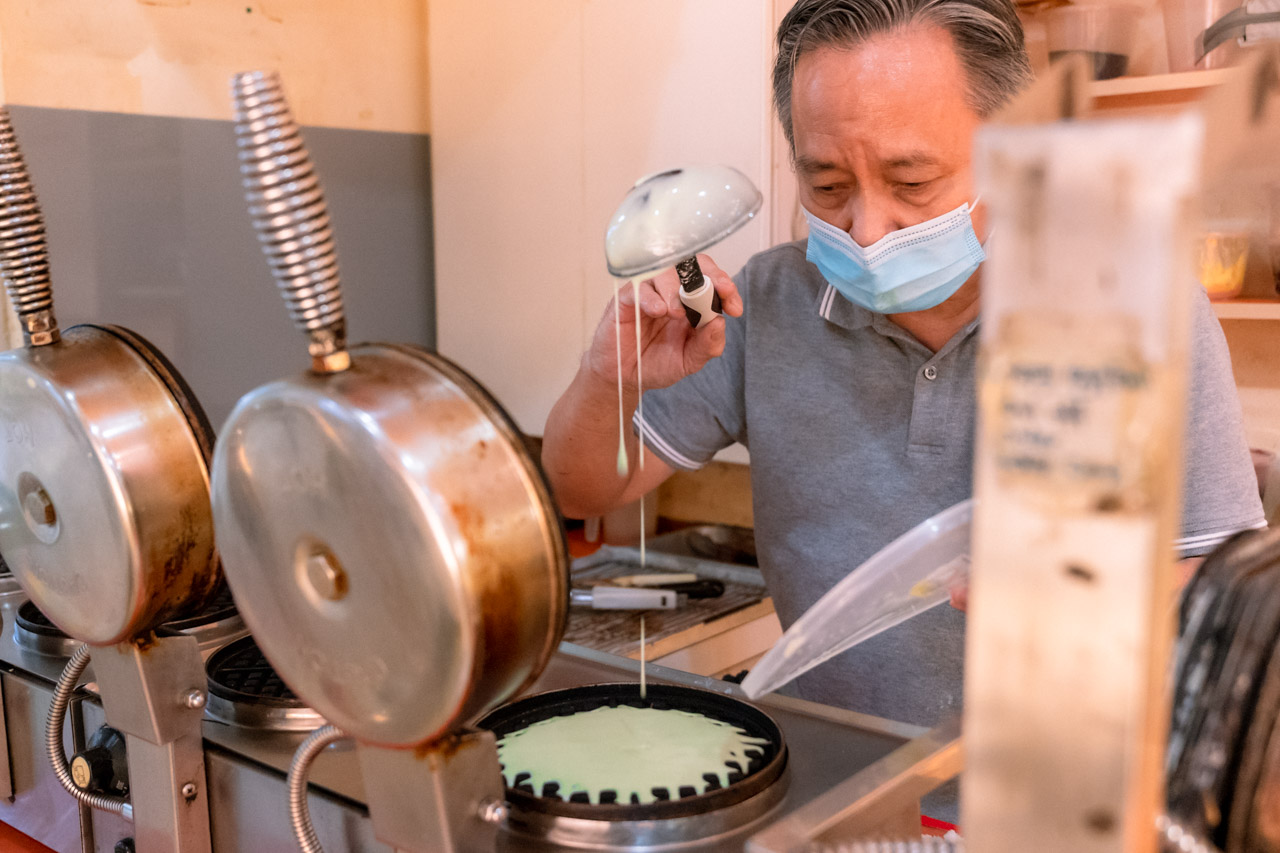 You hold the green thing in your hands. You take a bite, and your tongue presses against the square grooves, gridded and pressed into perfection. You smell the aroma of pandan, reminding you of the vivid green pleats your neighbour plants along the corridor. You marvel at the geography of the waffle: the shades of golden brown overlying its terrain, the green peeking out from underneath, the crisp of its edges—you can practically hear the crunch from biting in simply by looking at it.

Your teeth marks imprint like ridges across its centre, the ooze of the chunky peanut butter overflowing like a river. The green thing rapidly diminishes. When you finish devouring the centrepiece, you tear the paper bag apart and lick the peanut butter pooling at the bottom clean, your inkling to preserve your image in public spaces forgotten. For the waffle reveals the truest and most unabashed version of ourselves.

The origins of the pandan waffle

After searching high and low for the mysterious origins of the pandan waffle, I gather it probably originated somewhere in Vietnam, with its roots tracing back to French colonialism in the 19th century.

Culinary historian Erica J. Peters and Vietnamese cuisine authority Andrea Nguyen suspect these waffles might have drawn inspiration from the European pizzelle—a thin waffle-batter wafer cookie, combining the rice and flour cake-breads (báhn) waffle-adjacent practice in Vietnam with the Euro-American waffle tradition. It is unclear how this early pizzelle version then evolved to become pandan-infused, or how it acquired its light, fluffy texture with its mochi-like centre and crispy casing.

The pandan waffle is a common traditional street snack in Vietnam, known as “bánh kẹp lá dứa” in the native language, which translates to “coconut pandan waffle”. The waffles are traditionally eaten plain and sold at relatively cheap prices, beloved by the local children and popular with the masses.

Before the invention of the electric iron, these waffles used to be cooked in cast-iron moulds heated over hot charcoal by street vendors, the green discs emerging slightly smoky and charred at their rims.

Our Singaporean version of the pandan waffle is similar to the original, with the added idiosyncrasy of pairing our waffle with spreads. Standard fillings include peanut butter and fruit jam, while more exotic imaginings range from Cookies and Cream to Tuna Mayonnaise.

As a friend aptly put it: “eating waffles is like eating bread. Can you imagine eating plain bread?” That said, we do have our plain waffle advocates. We see you, we know you, and we appreciate you all the same.

While I can’t tell you how to make the perfect pandan waffle, here are the differences between a pandan waffle and a regular waffle: pandan waffles are made with coconut milk instead of regular milk, with pandan extract or leaves being used to flavour the batter. It is precisely this pandan that is responsible for the waffle’s distinctive “spring green” colour, as well as its characteristic fragrance fondly known as the “Vanilla of the East”.

The waffle is then cooked on the iron until it starts to crisp and brown at the edges, and can be toasted to varying degrees depending on how well done one wants it to be. The end product is a beautiful green panacea that appears burnished on the outside but remains soft and chewy on the inside.

A simple and efficient snack

There is little consensus as to how the pandan waffle became a staple of our neighbourhood bread shops, but I have been able to sniff out morsels of waffle crumb historics with my sleuth nose. From the waffle store owners and customers I spoke to, I understand the pandan waffle may have become popular in Singapore due to its convenience, good taste, and the lack of alternatives.

First of all, a pandan waffle is easy to make. Its batter can be made in advance in batches and stored for up to a week in the fridge, scaling back on the cost of manpower and production. The ingredients of the waffle batter are simple, consisting of basic household ingredients like plain flour, rice flour, tapioca starch, baking powder, sugar and eggs, in addition to coconut milk and pandan extract.

Making the waffle is also straightforward: you just have to scoop the batter onto the waffle iron and wait a few minutes for it to cook. The staff can even man the counter and collect payment in the interim. This is a win-win for all, as customers enjoy the minimal waiting time required to obtain a waffle on the spot, while bread shops benefit from the fuss-free preparation and fast turnover.

Additionally, the taste of the pandan waffle is unique and invigorating, and the fact that the waffle comes straight off the stove rewards a sense of instant gratification. The crispiness and freshness contribute to the entire experience of eating a waffle—which tends to matter as much as the actual waffle itself. No one likes a stale, soggy waffle. The pandan waffle must be made fresh to be good.

The pandan waffle may have risen to prominence in Singapore due to the lack of alternative “traditional” street snacks. Unlike our neighbouring country Malaysia, with its ramly burgers, satays and rojaks, or our metropolitan counterparts Hong Kong, with its egg tarts, egglets, and cheong fun, or Taiwan, home to the bubble tea and chicken cutlets and renowned for its night market street snacks, Singapore has fewer traditional snacks that are as prevalent or readily available.

The only parallels one can think of to rival the pandan waffle are the kuehs, in terms of both the Malay (ondeh-ondeh, kueh tutu, kueh lapis) and Chinese (min jiang kueh, png kueh, ang ku kueh) varieties, as well as maybe the fish balls and curry puffs at Old Chang Kee.

Still, kuehs are mostly only sold by specialty stalls or as a sideline treat in coffee shops, whereas franchises like Old Chang Kee tend to be situated in malls or near MRTs instead of being embedded within the local neighbourhood.

What does the pandan waffle mean?

The pandan waffle is a curious trend that has lasted through the decades, and many still swear by the pandan waffles from their neighbourhood bread shops as their go-to snack on the way home from work or school.

This is in spite of the emergence of cafés and ice-cream bars also dishing out the cousin of the pandan waffle—Belgian waffles—in fancy parlours for a much higher cost (but that shall be another article for another time, stay tuned for part 2.0).

Our persistence that the pandan waffle remains a part of our selection of everyday sweet snacks says a lot about our inclination as Singaporeans to hold onto what is old and gold. Just think about the Oreo McFlurry order from Mcdonald’s you faithfully abide by. The Mudpie and Strawberry Shortcake flavours don’t hold a candle to the original, while the new M&M McFlurry on the menu is just a heinous gustatory crime. Why opt for something else when the prototypical is the best?

Our adoration of the pandan waffle reflects how it has established a central place in many of our childhoods growing up in the heartlands, in particular for the older generation, as back in the days, there were even less options to binge on.

To its credit, the pandan waffle offers something more substantial and filling than the usual array of mass-produced, dime-a-dozen supermarket tidbits.

In this day and age, the pandan waffle continues to sustain its relevance due to its convenience, ubiquity, as well as affordability—appealing to the common neighbourhood dweller as well as school-going cohort with expandable appetites but shallow pockets.

Our sense of loyalty to the food we love as children also speaks volumes about how we remain young at heart despite the weathering of time, and how we are suckers for bygone memories.

The pandan waffle is unique to Singapore and the Southeast Asian region. It feels ours, owned, something indelibly precious and reminiscent of a glowing memory of what is historical and traditional. There is a sense of authenticity in the eating of the pandan waffle, an awareness of national belonging and identity imbued into our subconsciousness as we follow the pandan trail.

The pandan waffle is not quite like any other offering in our national snack inventory, and nothing quite compares to it on the nibbling drawing board—it is a sweet treat that simply exists as a class of its own.

Although the pandan waffle initially originated from Vietnam, we have modified its taste profile and presentation to suit the palate and preferences of Singaporeans, proposing our own distinctive spin to the traditional snack.

The food we eat has always been about more than just the sum of its ingredients—it also represents memory, tradition, identity and longing. And in a city never scarce of new and innovative food to try, it’s endearing how Singaporeans have preserved the culture of traditional waffles, with Instagram accounts such as @pandan_pig (with its own pandan waffles map) and @hospitalwaffles (with its focus on waffles for patients and healthcare workers) being dedicated to them.

But as this country continuously changes and evolves, could this ordinary snack be our way of holding on to the crumbs of our past that are left?

Wakes up early in the morning to write. Wishes she read more poems while in school.